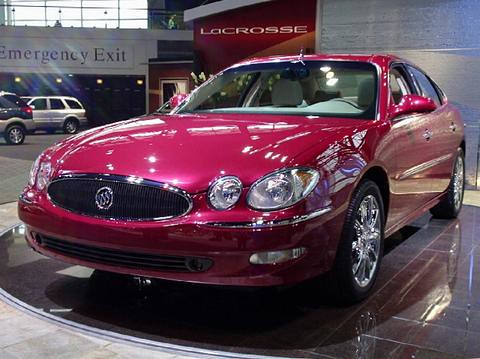 A Victory & Reseda Throwback Review of the 2005 Buick LaCrosse

When you hear someone talk about the "near-luxury market," which brands do you think of? That will depend on the type of buyer you are. Foreign-oriented buyers will tout the greatness of an Acura, Audi, and Volvo. These are fine marques to consider unless you are a domestic car buyer. Domestic brand consumers are much more conservative about their values and consider cost above all other aspects of the product. Throw both camps in together and you have an interesting dichotomy in the use of the term “near luxury.”

Buick’s position in the "near luxury market" is a solid one in North American terms. The "Doctor's Car" has delighted owners for over a hundred years. However, Buick has suffered an image problem as they have the highest average age for consumers in the new car market. As domestic upscale brands, such as Cadillac and Lincoln, found younger buyers through exciting products, Buick continued to serve its traditional buyers. That also is changing; however, Buick wants to cater to a wider audience, including their "traditional" target markets.

Despite the faux pas from a branding standpoint, the 2005 LaCrosse sedan turned out to be a very nice product for Buick. This is part of a revamping of the entire line which began by the introduction of the Rendezvous crossover, the Rainier SUV and the Terraza crossover sport van. The LaCrosse is the first of three new cars, which will follow up with two larger sedans to replace the LeSabre and the Park Avenue lines.

However, the focus is on the car that will replace both the Century and the Regal. Initially, a short-run 2005 Century will be in production until October, when the LaCrosse becomes fully ramped-up at all Buick retailers. In all, the LaCrosse is based on the same platform as the Pontiac Grand Prix, which allows the Buick to be the same length as the cars it replaces, but ride on a longer wheelbase. This is good news for those who feel indifferent with the Buick’s ride quality.

The packaging is more evolutionary upon a basic Buick design theme. The familiar oval grille with the three crest badge is prominent, but not the headlight design. Quad round headlights are a new element to a familiar face and appear for the first time since 1974 on a Buick. It is a very tasteful look.

From there, the body becomes fluid and ends at a new design for Buick rear ends. No longer will you see a full length taillight design on a mid-size Buick. The taillights only are on the corners as the scalloped rear deck embodies the familiar Buick badge in the center. No more chrome strips declaring itself as a Buick as the badging becomes simplified.

One thing I applaud Buick is the six-light side glass profile. Though a departure from current Buick trends, it is a signature that should appear on future products from the brand. Gone also are the 15-inch wheels of the Century and Regal LS. Instead, standard wheels are now 16 inches, whereas the CXS are at 17 inches. This improves the Buick’s stance greatly.

Interior-wise, it is a vast improvement from Buick trends. I felt that the silvery instrumentation of the Rendezvous and Rainier was garish. I also never enjoyed the geriatric form of the current Century and Regal interior with cheap plastic and fake leather door trim. Instead, you treated to a tastefully done interpretation of a Buick interior for the new wave. The white-on-black instrumentation is welcomed as with chrome trim around the dials.

The example of a pre-production CXS model shown at the Chicago Auto Show came equipped with a floor shifter for the automatic. A local test drive in White Bear Lake in a CX model utilized the standard six-seater configuration with a column shifter and a nifty up-folding center seat cushion that becomes a mini console. The treatment on the five-seat CXS is very lush with better shift control and storage utilization. The center controls, including the audio system, as a major improvement with better look and feel for all drivers. Push buttons are used instead of a hodgepodge of odd-looking switchgear. The audio system seems more modern instead of geriatric.

When you sit in the LaCrosse, you are sitting in a comfortable car. The seats feel more supportive in the CXS model I sampled, which would point to the same for the lesser models. The flat 60/40 split front seats of the Century will not cut it for the LaCrosse; therefore you sit very comfortably in the CX’s contoured split-bench seat arrangement. Rear seat room is better due to the longer wheelbase, though tall passengers will have to negotiate the rear window when they sit back against the rear cushion. A 60/40 fold-down rear seat is standard on the CXL and CXS, but optional on the CX.

To decipher these new model designations, let me give you a good overview. If you’re a Century owner, you get the CX. The CX specification is equal to the Century Limited, but will be priced between that model and the lower priced Custom model. For Regal LS owners, your car is the CXL, which comes with standard leather seating. Regal GS owners will be disappointed since the supercharged engine and monochromatic paint job are no longer available. For those buyers, the CXS is the most logical choice with the brand new “High Feature” V6 engine.

Recent physical problems have allowed me to rethink the sedan. I now look for a driving position that does not tax my right knee. A crossover or a SUV would work, but the higher step is something I am not fond of. Though Ford touts a “command seating position” in their Five Hundred and Mercury Montego sedans, the LaCrosse can accommodate me just as well in the traditional American sedan seating position. It takes the right adjustments between the power driver’s seat and the tilt-and-telescoping steering wheel to make it feel just right. Ingress and egress is basic Buick with a wide opening between the door hinges and the B-pillar.

Underneath its beautifully designed hood are two appropriate powerplants. If you are a Century owner, you will find that the 3100 V6 is no longer available in the Buick line. Right off the bat, the CX and the CXL starts you off with the 3800 Series III V6, which is a welcome change for the mid-size line. Just like previous experiences with this engine, the 3800 simply roars out of the blocks and smoothes out at cruising speed. My experience with the 3800 says that it will turn an average of 23 MPG. Not bad for a big V6. A four-speed automatic is standard on all models.

As mentioned before, the CXS will get the new global “High Feature” V6. With variable-valve timing and dual overhead camshafts, this is the most advanced engine ever put underneath a Buick’s hood. While the 3800 runs with 200 horsepower, the 3.6litre HFV6 spits out 240. On the low-end, it only beats its older, bigger brother by 5 pounds of torque. One thing about these advanced new engines are the more horsepower you run on, the lesser the torque. On uphill drives, if you drive a CXL beside a CXS, you do notice the difference on the low end. One will come away disappointed that for a higher output V6 that the torque as not as robust as it should be. For my money, I’ll stick with the 3800.

Once on the road, the biggest difference between the older Century and Regal models and the LaCrosse is a solid ride that does not wallow, but remains firm on the job. Handling is tidy and the overall driving control is lithe yet solid. This is considered a leap in the right direction for the brand. Braking is easy to manage and shorter than many cars in its segment, including the Mercury Montego. There’s a solid yet sharp feel that you get from a GM braking system that translates extremely well in the LaCrosse.

Based on what I’ve seen and driven, the LaCrosse is a winner. Buick has done a marvelous job by attracting both their “traditional” customers and newer, younger, import-oriented buyers alike. Upon turning 40, I must say that this Buick has caught my eye even more so than any Buick before it. Mainly, Buicks would look good, but fail to deliver a satisfactory driving experience to cater to a more handling-oriented operator. The LaCrosse’s promise is to exceed one’s presumptions about Buicks and deliver the type of drive unbecoming of a mid-size premium American sedan.

So, would rather have a Buick? In this market, I’d say “absolutely.”

PRE-OWNED VEHICLE INFORMATION: Per a search on several car shopping sites, V&R found there were several 2005 Buick LaCrosse models available between $3,800 and $8,000. Mileage and condition varies, but most were found with over 90,000 miles on the odometer, the highest being over 181,000 miles. Always have any vehicle inspected before purchase.