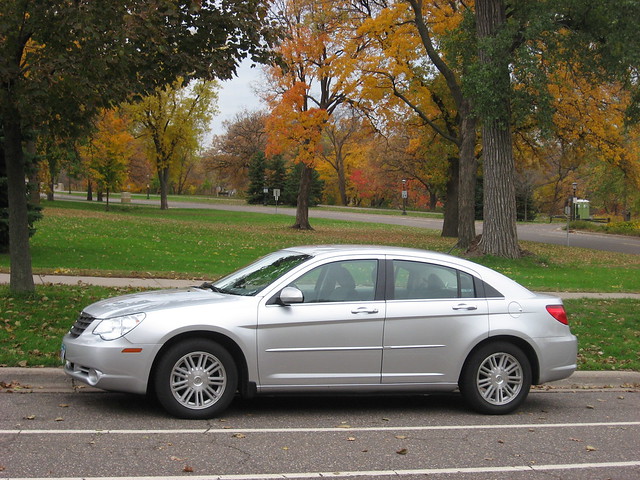 A Victory & Reseda "Throwback Review" of the 2007 Chrysler Sebring

For six hours the United Auto Workers struck Chrysler LLC earlier this month. Six hours! Then, everyone went back to the table and tentatively agreed on some sort of contract. A shift closure and four union local rejections of the so-called agreement later, rumors began to circulate that Cerebus, Chrysler LLC’s owner of record, want to trim the automaker’s current lineup by at least five models.

I've always been a cheerleader for Chrysler (today, they're called "fanboys" – rather "Moparians"). As an innovator in engineering and design, Chrysler has always fallen short of everyone's expectations. Not just the pundits, but also even the company that once owned 80 percent of the Auburn Hills-based car company, Daimler AG.

It has also been a while since I drove some Chrysler's products beyond a short test drive. After Twin Cities GLBT Pride, where Chrysler set up a short track on a parking lot across from Loring Park, I took the wheel of a 2007 Jeep Liberty Limited for a day. Interestingly enough, I was slated to head down to Winona for the day in it when that part of Minnesota almost washed away into the Mississippi. You would think that it would be a great opportunity to test the Jeep’s true abilities. Wrong! It was raining enough up in The Cities not to inspire the confidence of this driver to even tool this thing around town.

In short, I had a lot of negative feelings about the Jeep Liberty that I did not post a review of it.

When I picked up a 2007 Chrysler Sebring Limited sedan recently for a day, I had a few things in mind as I sat behind the wheel. For one, I had some advance shopping to do ahead of my move to my new place in Robbinsdale, practically the other side of town from my current South Minneapolis home. Plus, I am thinking of a car purchase in the next couple of years and had the Sebring in mind as a choice for said purchase.

This was not the first time I drove a Sebring Limited sedan. That was the car I sampled at Pride with a 3.5 liter V6 under the hood. My latest Sebring had the World Engine instead, a 2.4 liter 4-cylinder that is found under the hood of several vehicles as diverse as the Mitsubishi Galant, Hyundai Sonata and the Jeep Patriot. Through Daimler, Chrysler hooked up with Mitsubishi and Hyundai to develop a strong four cylinder motor good enough to pull its best sedans and SUVs. They did a wonderful job. I liked the motor on the Hyundai; I like it even better in the Chrysler.

What I love about this motor is its confidence. It wants to climb hills, pass others, chill on cruise and return the favor every time you turn the key. However, it needed a chassis to compliment this motor. The Hyundai's chassis is fine, but the ride tends to be dampened just lightly. The Chrysler felt more substantial than the Hyundai. Its ride and handling mix felt confident to take its tasks with ease. There is an overall smoothness in the Chrysler that was natural. The suspension didn't pitch and dampened quite well. The standard Bridgestones stuck to the road nicely. Lastly, the steering with sharp and lithe as were the brakes.

Where I find fault in the car was with Ralph Gilles' design. I respect Mr. Gilles' willingness to challenge the enthusiast's and the consumer's eye, but in some respects there is a love-hate relationship with the overall package. The shape I like, but some of the details I can do without. The hood, for example, has these channels that emulate the Crossfire's yacht-like "fins." A cleaner hood that complimented the shape would work better on this car. 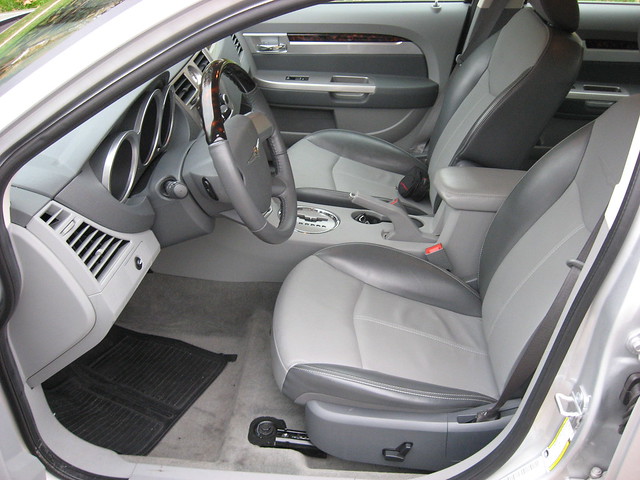 Inside also shares the same mixed reaction I had for the exterior. However, it's not just the details that detract. If you must have a high-end variant, please make the seats comfortable and supportive. I'm tall and wide, but that does not make the seats short on comfort for those of us who do not completely fit in them. Plus, the instrumentation looked overstyled and the backlighting was not good enough for those who need to read them. Lastly, I felt that the gas gauge was obscured by the steering wheel, even at the height and depth I was comfortable in. Yes, these are details, but necessary ones when considering a car for purchase.

To balance out the good and the bad, fuel economy was expected for a mid-size four-cylinder sedan. The 25.5 MPG loop, made up of urban and highway driving, is livable, but one can do much better than this in its class. Then again, choose the 3.5 liter V6 and you can do much worse. I would expect if I chose a Dodge Avenger with the 2.4 liter engine to get the same fuel economy overall.

In all, I'm glad I had a chance to sample the Sebring for the type of driving that I do. It works well as an adult-grade sedan for commuting, nights out on the town and the weekend drive. Details do detract from what is a fine driver, but the oblivious consumer could overlook them. This consumer may take more than being oblivious to not pay attention when in the care of one.

All I ask is that the design staff at Chrysler LLC to find a way to clean up the Sebring a bit in order to save it from the rumored chop. Then again, they could also clean up the Charger-esque rear end of the Dodge Avenger while they're at it.

PRE-OWNED VEHICLE INFORMATION: Per a search on several car shopping sites, V&R found there were several 2007 Chrysler Sebrings available between $4,800 and $16,000. Mileage and condition varies, but most were found with over 100,000 miles on the odometer, the highest being over 155,000 miles. Always have any vehicle inspected before purchase.