Perhaps it needs a mask. Nissan created a new preview site for their upcoming GT-R coupe as a play on the multitude of videos posted of their prototypes in action at the Nurburgring. Each one of these testers had a black mask obscuring the front end of each vehicle. Therefore, Nissan dubbed their preview site after the "black mask." This gives the upcoming supercar a bit of mystery before its official unveiling at the upcoming Tokyo Auto Show.

What do you think this particular SUV needs to make it stand out in a crowded market? It's an odd looking entry, isn't it?

Perhaps it needs a mask. Nissan created a new preview site for their upcoming GT-R coupe as a play on the multitude of videos posted of their prototypes in action at the Nurburgring. Each one of these testers had a black mask obscuring the front end of each vehicle. Therefore, Nissan dubbed their preview site after the "black mask." This gives the upcoming supercar a bit of mystery before its official unveiling at the upcoming Tokyo Auto Show.

However, the vehicle I'm reviewing needs more than just a black mask. To set the record straight, the vehicle in question is neither a high performance coupe nor a Nissan product.

What the Suzuki XL-7 needed was a paper bag.

Yeah, that’s pretty harsh, but let me explain. The Suzuki XL-7 is their top of the line SUV based on the Chevrolet Equinox and Pontiac Torrent people haulers. The Canadian-built XL7 is larger, with a longer wheelbase and seating for seven people. This particular vehicle shares a lot more DNA than just the GM "small" twin SUVs as evidenced on some of the details inside and out, however you can’t miss a XL7.

Why would the Suzuki need a paper bag? It is because the paper bag would cover the front end of this vehicle. No words can describe the felling of looking the front end of this car. Trapezoidal headlights and an unnecessary chrome-bar grille just looked heinous. The side profile was also a curious mix of shapes that simply detracted from the vehicle's function rather than its overall form. Frankly, if you wanted a better-looking vehicle that has three rows of seats, skip the XL-7. 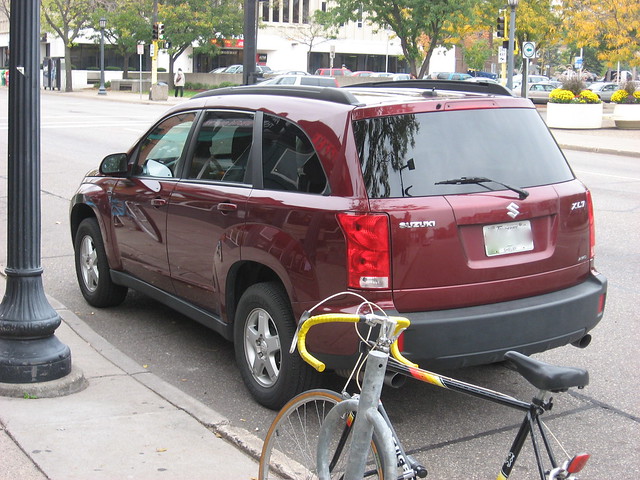 Underneath the hood is a version of GM's High Feature V6, displacing 3.6 liters. Even though it has 252 horsepower on tap, it can feel sluggish and rough sometimes, even with its autobox and all-wheel drive set-up. Yet, it can do well in traffic and on the highway. I wasn't expecting the sure-fire response of a Habayusa or a Katana, two of Suzuki's hottest motorcycles, but it does keep up with traffic competently.

Lest we forget that the XL-7 and its GM cousins are essentially car-based. Its manners are certainly car-like, but its bulk contributed to some constraint when it comes to ride and handling behavior. It is a smooth ride, but can respond to road imperfections and transmit them into the cabin with concern. Handling-wise, it’s no better than any SUV on the road. You feel its girth and bulk on the road, but you can squeeze this monster on lane changes with some ease. The steering is quite easy and tight for a mid-size SUV and braking power is adequate.

Inside the expansive cabin is a sea of beige leather and fake plastic trees. Everyone that rode in this beast was not entirely happy with its seats. They simply provided no comfort, even for in-town excursions. I also was put off by the slapped together hodgepodge of Suzuki and GM cabin details. Nothing is seamless in its cabin presentation for the driver. If I wanted to drive an Impala, I would be happy to do so and put E85 in the tank. But, I’d like to not be reminded that most of the cabin's components came from an Impala for the use inside a Suzuki!

You can tell it's a seven seater not just for the third row of seats. The rear cargo area was huge when the third row was down. However, to demonstrate a theory, a close friend decided to check out the third row. This is the same 6-foot-4-inch friend who always sits the back while his partner and longtime close friend sits shotgun next to me on drives. First off, we found that the entry is not for adult use. Worse still, he proved that truly no adult should ever sit back there for any reason. In fact, these seats are for reserved children who are over car seat age. Oh, and don't even think of throwing your drunk friends back there unless your completely masochistic or simply can’t stand them. 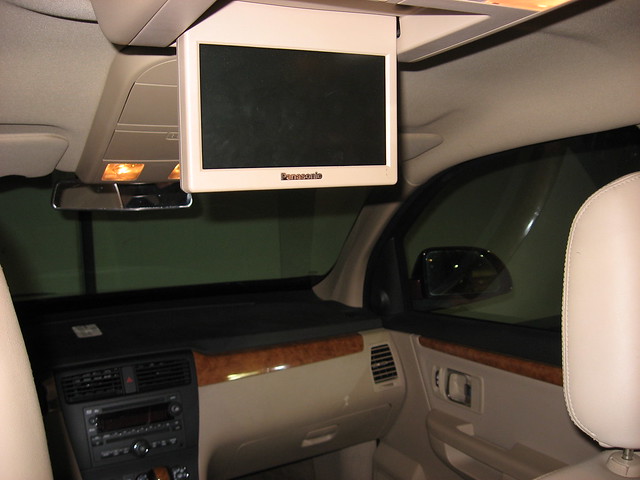 One particular option was on-board: the drop-down Panasonic LCD video screen. The audio system also had a DVD player along with a single-CD slot, so be careful not to put a CD in the DVD slot…and vice versa. Second row passengers have access to controls for the audio and video systems.

All of this is fine and dandy, but let's get real for a moment. This thing got 17.5MPG in the loop that included in-town driving and the run down to Northfield, just south of The Cities. Do I expect anything else consumption-wise from a huge SUV with a Suzuki nameplate? I’m afraid so.

I can understand why Suzuki would want to sell the XL-7, but why do they need this monster when the Grand Vitara suffices as the brand’s choice to sell a SUV in this market? After all, the trend is go small on the SUV and the Grand Vitara fits that place perfectly. The XL-7 is a complete afterthought. If it was designed better inside and out, then it has a chance against its rivals. American Suzuki also needs to ensure there is a sales and service network to support this vehicle. If you can find a Suzuki automobile dealer, make sure they’ll be there during the course of your warranty. In The Cities, we lost a two dealers in the past year and the East Metro does not have a retailer selling Suzuki cars at all.

One last thing, as someone in the process of moving into a new place in a month-and-a-half, this was a good exercise in considering what I need to do it in. While my rational mind would choose to pick up a Ford E-Series van from U-Haul and get it done in he course of the day, a SUV can suffice well enough for my stuff…excluding the bed. The XL-7 looks like it can do the job, but I'd rather not scare off my neighbors arriving in it with all of my stuff. Besides, my soon-to-be-roommate already seen it…and had a damn good laugh at Suzuki's expense.

Sorry, Suzuki, but I doubt if a mask, a paper bag or even an ugly stick can help sales of this thing.

PRE-OWNED VEHICLE INFORMATION: Per a search on several car shopping sites, V&R found there were several 2007 Suzuki XL-7s available between $800 and $7,000. Mileage and condition varies, but most were found with over 125,000 miles on the odometer, the highest being over 220,000 miles. Always have any vehicle inspected before purchase.