Over the past several years, I had the displeasure of driving a couple of Ford Escapes. Why would I describe my experience with one of the best selling small SUVs as "displeasure?" There is an old adage that goes: "if it quacks like a duck, it is a duck." Now, replace the word "duck" with "SUV." You can tell where this going.

In honor of our upcoming 300th vehicle review, Victory & Reseda will be reposting our older reviews for your reading pleasure. This way, we can show you our work when Randy had to rent cars and write about them, just to cut his teeth in this business. If one thing was true about this work – things have certainly got better in the automotive business, in terms of product, engineering, safety and technology.

We have to start somewhere. Without further ado, here is Randy's first published vehicle review ever – the 2008 Ford Escape…

Over the past several years, I had the displeasure of driving a couple of Ford Escapes. Why would I describe my experience with one of the best selling small SUVs as "displeasure?" There is an old adage that goes: "if it quacks like a duck, it is a duck." Now, replace the word "duck" with "SUV." You can tell where this going.

It is not that I dislike SUVs. With only one exception, every SUV I’ve driven would be best described as a modern version of the Conestoga wagon. As you site high up above the traffic, you feel the suspension shake you along even the smoothest of tarmac. Let’s not forget the lack of fuel efficiency these buckets employ. Shall I talk about the comfort a SUV lacks even around town?

So, why did we go crazy over these beasts of burden a decade ago? Conversely, why did the automakers think they would replace the station wagon of the 1960’s and 1970’s with the idea that you can take one of these things over the Rubicon Trail?

This was my experience with the last generation-and-a-half of the Ford Escape.

After cringing for a few minutes on gaze of the 2008 Ford Escape XLT I sampled recently, I finally took a deep breath and hoped for the best.

At first, I was not too thrilled with the updates on the Escape. The grille was this boxy un-Ford-like piece of chrome. It looks like it does not want to be associated with either the Edge, Explorer or F-Series pickup. It’s different, but it might grow on you. From there, the body seems to canter downwards towards the front. This explains why the Escape wants to entertain the crossover market, but retains its SUV roots. I love what they did to the rear with a bit more sculpturing and overall aesthetic look. 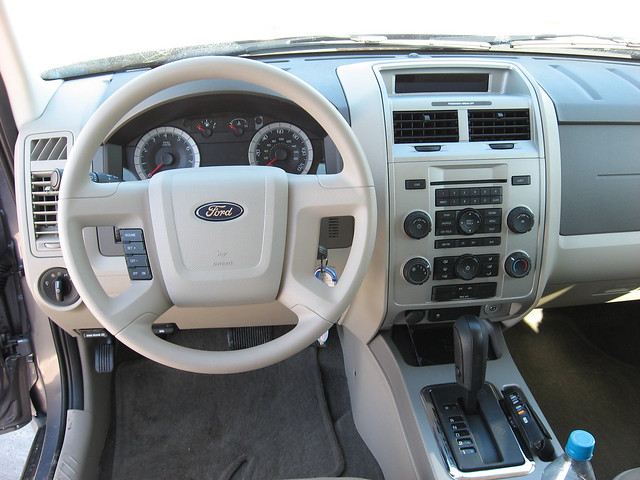 Inside, you will find a better instrument panel. The switchgear on the center stack may be confusing for starters, but once you figure out the switches, you will come to enjoy having 10 presets per band on your audio system. Then, you look up to the center top of the fascia and gaze at this clean display for the audio system and the clock. The instrumentation is different, but not exactly what Escape owners really want. The seats are the same as before, but with a tasteful light beige/dark brown-gray two-tone durable cloth for the seating. You can tell there’s a few touches from the Fusion inside with the steering wheel, several switches and the single key/remote lock unit that looked oddly familiar.

Then, I drove it. It is with great pleasure to report that the Escape was a pleasant surprise overall! What used to be a hard riding small SUV, the Escape is much smoother now. It’s just like driving a crossover…did I say that too loud? This is indeed a welcomed change as it just absorbed the bumps on the highway, but gave you a good perch above the road. If you take a cloverleaf, the old Escapes felt as you were about to tip over. Not the 2008 model. Even if you take the curve a bit too hard, it will not feel like it will about to tip. The canted angle of the vehicle contributes to a much lower center of gravity. The steering has a sharper radius than before…almost car-like for a SUV!

Power comes from an old familiar motor. The 3.0 liter V6 is unchanged, but it seems to respond much better than before. The change in driving dynamics has a lot to do with this improvement.

Perhaps the greatest improvement is in the fuel economy. Up until this model, only one SUV has ever gained more than 20 MPG. Ford Escapes always gave me fits with an average of 18.5 MPG. That figure is unacceptable for a small SUV in an urban environment. I am happy to report that the Escape with a V6 and 4WD got 20.7 MPG. This figure is still low considering the soaring price of fuel, but better than before. Frankly, a lot of you would rather have me drive the Escape Hybrid. Since the drive is much better than the previous generation-and-a-half, I would welcome the Hybrid without question. 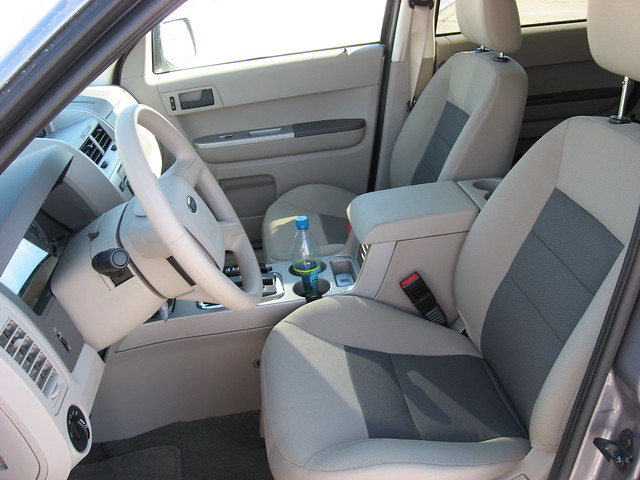 The Escape’s improvements are definitely worth a look, especially the Hybrid. Though, I would not sneeze at an XLT similar to what I drove. If you can live with 20-21 MPG on the average for a small, capable, and well-built SUV, go for it!

However, if I was really fussy about the front end, I would consider either the Mercury Mariner or the Mazda Tribute. Keep in mind that these two have been changed with the same enhancements for 2008. The Mariner looks fantastic, but the Mazda now gets a Hybrid variant.

After this experience with the Escape, there is still hope for the belittled SUV. The more alternatives to fuel and propulsion systems consumers have, the better the playing field will become for those who insist on getting a real SUV.

PRE-OWNED VEHICLE INFORMATION: Per a search on several car shopping sites, V&R found there were several 2008 Ford Escapes available between $4,900 and $10,000. Mileage and condition varies, but most were found with over 115,000 miles on the odometer, the highest being over 170,000 miles. Always have any vehicle inspected before purchase.