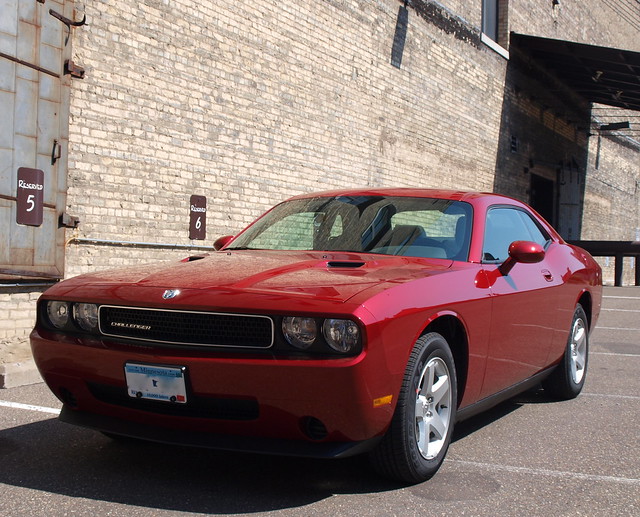 A Victory & Reseda "Throwback Review" of the 2010 Dodge Challenger

What better way to celebrate a national holiday (Independence Day in 2010) with a national icon – and a trip back to memory lane! As if I was driving a dream…

I often talk about the family's 1970 Plymouth Barracuda. It was perhaps the only car from my childhood that left an indelible impression on me. There remains a kernel of nostalgia for cars such as the Barracuda as I can only imagine how it would drive today.

Then, Chrysler brought back its sister – the Dodge Challenger. It evoked thoughts of my childhood. These were good thoughts – centered on a certain beautiful blue Barracuda with matching vinyl interior and a white vinyl roof. Memories of being dropped off at Vanalden Elementary School for class or for Cub Scouts.

Instead, Dodge concentrated on selling its most powerful models first. These were the models Mopar heads waited all their lives for – a SRT8 that evoked the meanest 'Cudas and Challengers of its time. My dreams were not of shaker hoods, Hemi mills and drag racing superstars.

I wanted the more modest model – just like my family's Barracuda.

Dodge did not disappoint. The Challenger SE seemed like a perfect time machine.

The SE model is equipped with the familiar 3.5 liter 24-valve V6 motor I love in the Charger 3.5L/SXT. Things get a little basic in here: Sirius was not available on my gorgeous Inferno Red example, but I did have an auxiliary connection for my iPod. I will admit that the old Barracuda was not equipped with the power goodies the modern Challenger SE has standard. I can also live with the dark grey interior of today’s Challenger – along with the welcomed relief of cloth seat coverings instead of the glossy vinyl of 40 years ago. 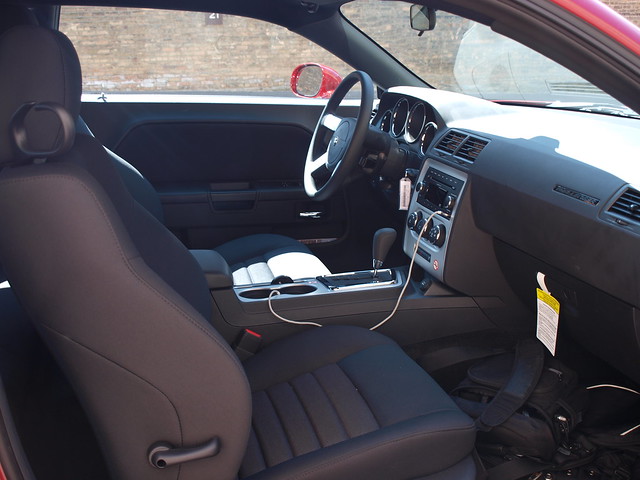 There is a lot to love about the Challenger. If you had one four decades ago, then you cannot find fault in its looks. Though modernized to meet current safety standard, the body is lovingly shaped the way I remember it. One not-so-modern thing you might not like: The blind spots from the C-pillar. Just like the old car, you'll have to contort a bit to manage through your blind spot vision. The old school power mirrors help, but they tend to be a bit smallish for good vision.

Inside have less retro inklings than the outside. The instrument panel looks familiar, but that’s where the retro style ends. The rest of the interior was picked liberally from the Chrysler parts bin – not that it’s a bad thing. Since the Challenger is built on a shortened Charger platform – the LX – of course it would use a lot of the four-door's components – right down to the Mercedes-designed turn signal/wiper stalk.

There is a drawback: The seats. Yeah, they’re big, but it took a while to get real comfortable into them. Side bolstering is big, but having a wider lower back makes things more complicated to get comfortable for a long road trip.

Under the hood of the SE is the all-too-familiar and aforementioned 3.5 liter V6. I love this engine even better in the Challenger as it seems to be tuned for the combination of retro grunt and the wider low-end band. I can push it into 5500 RPM where as the Charger could manage a few less revs when passing is needed. Part of it comes from attaching the five-speed Autostick transmission to it – something you won’t find on the Charger order list for 2010! I think of this combination as the modern day version of what we had underneath that 1970 Barracuda – either a 318 4-barrel or a 340 connected to a TorqueFlite autobox. I don't recall – it was classic small block Mopar power! And, ooooh, the V6 underneath the Challenger goes, baby! 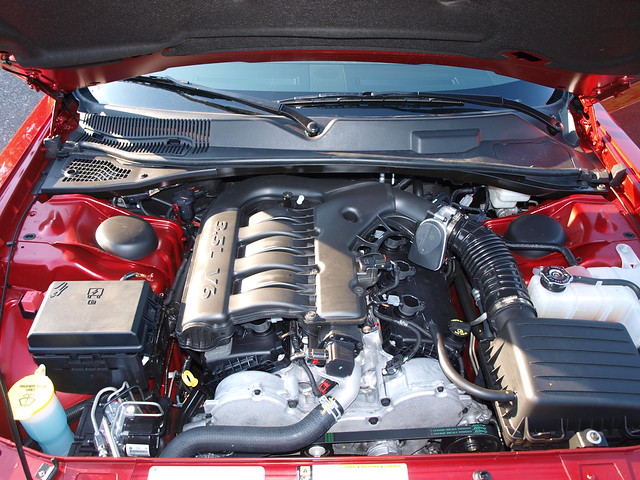 If I were to continue to compare the Challenger with my familiar Charger ride, the smaller, Millennial Ponycar would win on all counts. The ride is better than the Charger’s despite being on a shorter wheelbase. The steering is tighter, which makes me wonder why this setup isn’t on the Charger at all! Maybe the new 2011 Charger will benefit from a better steering setup. And, the brakes – they were magnificent!

Where it all goes wrong is the handling. It's wonderful on straight roads, but throw it into a turn and it wants to resist. The driver actually wins in the end, whether you call it "drifting" or simply "dancing" on the turn. It's only drifting when you see it from the outside. Then again, I can excuse this for the Challenger being rear-wheel drive and having natural oversteer. I can live with that, to be honest.

Something else I can live with is the prospect of turning a better fuel economy average than the Charger. It did not surprise me when I made the calculation to find that I turned a 23.8 MPG loop in the smaller coupe than in the big sedan. The advantage is the extra gear in the transmission and a proportionate weight balance the Challenger had. I will admit that a Chrysler 300 (another LX platform variant) turned a better fuel economy than the Challenger – which I'm wondering whether that was a fluke considering most if my experiences with the LX Platform had been with the Charger.

As I was driving the Challenger, I muttered a two-word phrase quite regularly: "Bad Assed!" Seriously, I have not driven such a vehicle that made me say that in a loving way! Driving the Challenger not only secures my soft spot for Mopar machinery, it also provided a way to enjoy the weekend of national days of both Canada and the United States. After all, it's an American icon built in Brampton, Ontario. 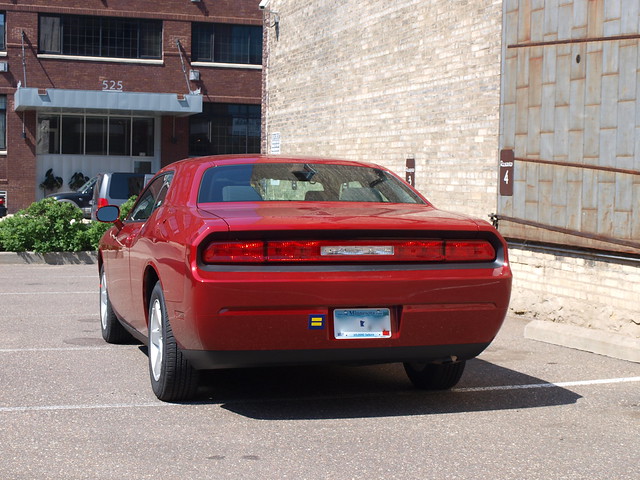 Not only that, it's been a while since I had people look at it while I'm driving. Did the 2011 Hyundai Sonata do that? No. Did the 2010 Jeep Grand Cherokee do that? No. Did the 2010 Ford Taurus or any other car driven this year do that? You get the point. People love the Dodge Challenger – and you don’t have to have the R/T or the SRT8 to turn people’s heads! Just have it in a beautiful color – like my Inferno Red example!

And, who needs a better coupe? The Ford Mustang, Chevrolet Camaro and Hyundai Genesis Coupe have more powerful V6 engines, but there are drawbacks in each one to consider against the Challenger. I could also name other coupes that are priced thousands of dollars more that could be more ideal for me. But, why aspire to those coupes? Plainly, the Dodge Challenger is not a Maserati Gran Turismo or a Bentley Continental GT. Why even ponder the stratosphere where everything I need is wrapped up in a neo-retro shape that harkens my youth – for under $24,500!

Which brings me to the one conclusion I can make here: As much as I love the Dodge Charger, the Challenger is a better car for me. To make it clear, I love the Challenger even more! It’s like driving a dream car – 40 years in the making.

PRE-OWNED VEHICLE INFORMATION: Per a search on several car shopping sites, V&R found there were a few 2010 Dodge Challenger SEs available between $14,000 and $18,000. Mileage and condition varies, but most were found with over 50,000 miles on the odometer, the highest being over 72,000 miles. Most likely, there will be more V8-powered Challengers out in the pre-owned marketplace than V6 versions, fetching higher prices than noted here. Always have any vehicle inspected before purchase.