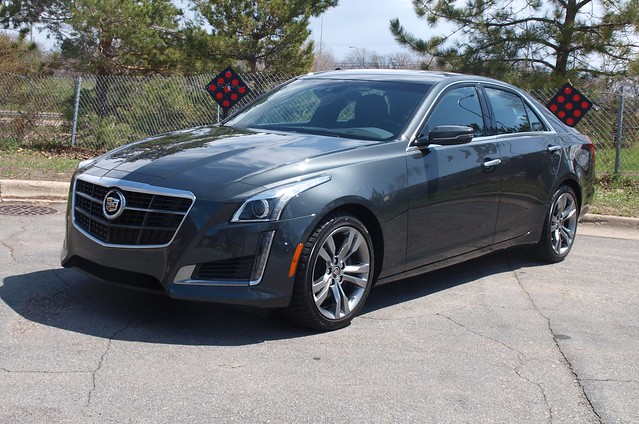 A Victory & Reseda review of the 2014 Cadillac CTS

It seems that everyone is talking about the newest Cadillac CTS lately.

The mid-sized luxury sedan already garnered its share of accolades, including Motor Trend's Car of The Year. Sales of the new CTS sedan are up steadily in response to the new model. The best indicator that the CTS is a winner is how people simply stop and stare at it. Once you pass by them in one, they will give you the thumbs up of approval.

The 2014 CTS sedan is certainly hitting its stride. This is the third generation of a car that began the renaissance of Cadillac. A year ago, the new CTS debuted at the New York Auto Show to a chorus of "oohs" and "ahhs," thanks mainly to its daring design. After a brief collective groan that a V version would not be immediately available in the new sedan, the chorus were whipped into a frenzy upon the promise of something potent.

The CTS Vsport was that promised vehicle. Instead of a V8 – supercharged or otherwise – the Vsport sports a 420 horsepower twin-turbocharged V6. That still sounds great, but has this performance version delivered on those promises?

The third generation CTS signals a new twist on Cadillac's Art&Science design language. While some of the brand’s traditional tenets remain, the CTS offers some of the most compelling, if not polarizing lines seen on any car. The point of the CTS is to ensure its unique styling can play against its rivals – namely the BMW 5-Series, Mercedes-Benz E-Class and Audi A6. No one can ignore the CTS from its creased and sculpted front end, its distinctive silhouette and the subtle tailfin rear end. The big grille adorned with the Crest-and-Wreath badge up front greets you with a series of unique lighting featuring vertical LED strips and projector beams.

To distinguish the twin-turbocharged V6 model from the rest of the CTS lineup, the grille gets a different texture inside the slots and aggressive nineteen-inch alloy wheels. You could also see some of the Vsport's upgrades up close – including the Brembo brake caliper covers. 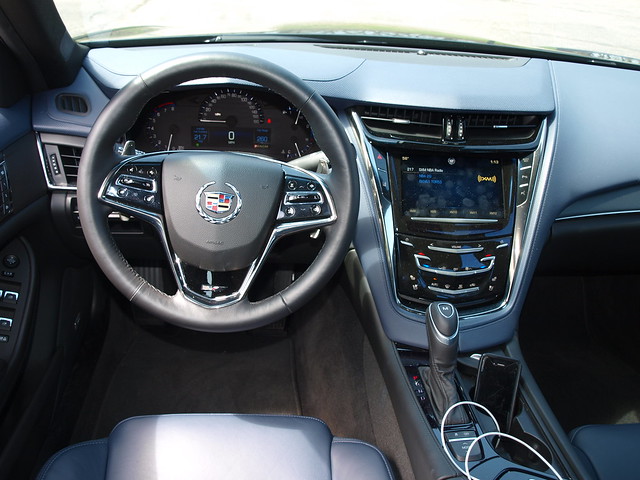 Cadillac's new interior philosophy is now evident in the CTS sedan. The primary focus of the cabin is the big CUE (Cadillac User Experience) TFT screen right in the middle of the instrument panel. The CUE interface has improved over time, since it only requires a slight hand movement to work some of the controls. Through CUE, you have control of the navigation, radio options – including SiriusXM and HD Radio – Bluetooth connected devices, and the climate control. The rest of the center stack works the same way for audio and climate controls.

Instrumentation is straightforward, including a switchable screen in the bottom of the display for trip and vehicle functions. There are more controls on the steering wheel and stalks, giving more options to enjoy your drive. Your will appreciate the improved finish and quality of the instrument panel compared to Cadillacs in the recent past.

The Vsport comes with sports-style seats with power adjustments for rake, height, and lumbar support. They are comfortable, but on the taut side. There is some bolstering to keep you in your seat behind the wheel. Rear seat room is quite good for adults, but a huge center transmission tunnel suggests seating for two people in the back instead of three. You may also appreciate the tester's color scheme with the seats and other contrasting points inside upholstered in Twilight Blue leather. The color scheme was indeed tastefully done. 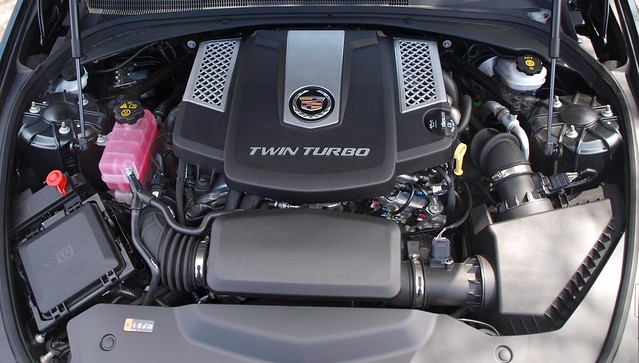 What makes the CTS Vsport worth the drive? It starts with the aforementioned 3.6liter twin-turbocharged V6 engine. The power and turbo response was immediate – you can feel and hear the fury of 420 horsepower waiting to lunge at anything at its wake. A new eight-speed automatic transmission is attached to this engine, sending power to the rear wheels. Perhaps the best part of the Vsport package is the exhaust note – a mix of muscle car rumble and exotic car brio. The CTS will quiet down at cruising speed, thanks to superior sound deadening.

The Vsport also offers a choice of four driving modes. In Tour, the ride is smooth with a hint of roll and lean in the corners. Steering feel is best described as nice with good response and a good turning radius. Switch it into Sport mode, and then feel the difference. Normally, things would get real taut favoring better handling over a smooth ride. Not so in the Vsport, as the ride is still compliant and smooth, while cornering is improved to near flat in the curves. Steering feel is heavier, but still easy to turn. If you dare, put the CTS into Track mode. That is where you will find the suspension real firm, the handling very flat through the corners, and the steering wheel feel at its heaviest. My preference would be to keep it in Sport for everyday driving. That is where the Vsport is happiest.

Brembo supplies the braking power to the Vsport. Stopping is very good in both normal and panic situations. Our tester had Bridgestone Blizzak tires, one of the best winter "shoes" in the business. Normally, you get eighteen-inch summer run-flat tires with the option of all-season rubber on the Vsport. It also comes with a suite of active safety features, including lane departure warning, collision alert and blind spot monitoring. If you find yourself out of a lane or close to a collision, the driver's seat will alert you via vibration. Some will complain about the Safety Alert Seat, but it is very effective compared to other forms of driver awareness through these active safety features.

With 420 horsepower at your command, one does not expect great fuel economy to come with it. The CTS Vsport averaged 21.9MPG, better than the average of 18MPG Cadillac advertises for this model.

The CTS sedan comes in four trim levels with a choice of a turbocharged four-cylinder or a V6. A basic model with the four-cylinder turbo starts at $46,025. Our Vsport example came with a sticker price of $59,995. There is also a trim upgrade available on the Vsport, as well.

If you really must have more horsepower, you can still get a 2014 CTS-V in the outgoing generation's sedan, coupe and wagon – all starting with a price of $65,825. You do get 556 horsepower out of a big supercharged V8. 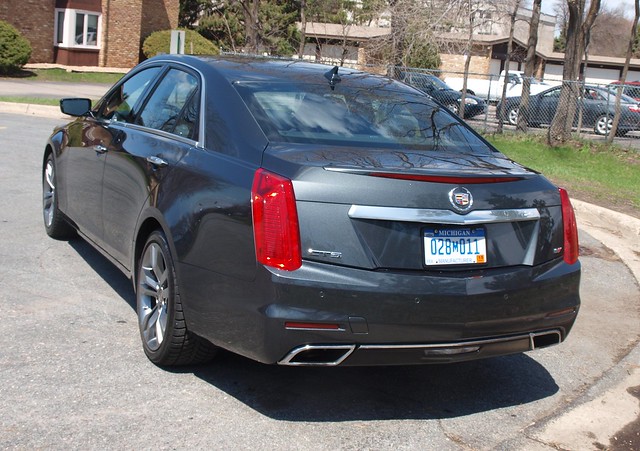 Though the Vsport represents what is achievable in the new CTS sedan, it is a very strong competitor in the mid-sized luxury sedan field. It is up against some established cars, but it seems that Cadillac may have found a way to match up against its German, British, Japanese and Korean rivals.

Above all, this is the best Cadillac ever made in decades. That is a statement worth making.

The CTS Vsport is indeed a conversation piece. Taking it to MN C&C (the monthly Cars & Coffee event at AutoMotoPlex in Chanhassen, MN), I found a lot of curious people armed with questions about the CTS Vsport. Both young and old wanted to know about the engine, the horsepower, the drive, the technology and the design. It is worth noting that the tester was parked alongside some first and second generation CTS-Vs. Certainly, you could oogle at the exotics in the main section of the show or any of the modified vehicles that dotted the property. But, to have people curious and interested in the CTS Vsport validates what Cadillac is doing to compete directly in the luxury car arena.

Therefore, the new CTS sedan is the talk of the automotive world. The conversation is continuing – you might as well join in.