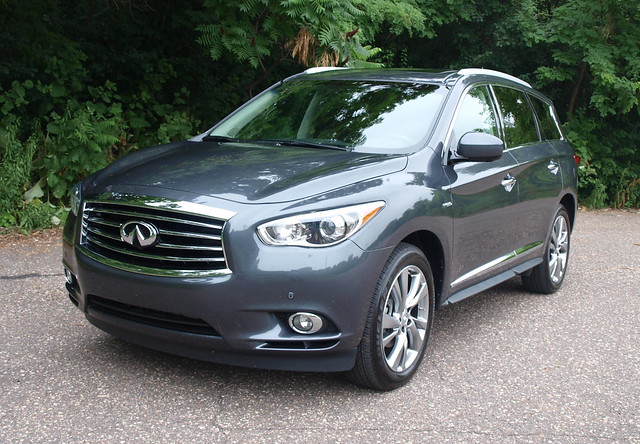 Oh look, it is another hybrid!

Yes, V&R reviewed the JX35 back in January of 2013. There have been some changes since then, despite it looking practically the same as before. First, the name has changed. We can no longer call it a JX35, but rather QX60. It is still the same looking luxury three-row crossover that I found the soul of the original Infiniti deep inside of it – the Q45.

The other change may be just as subtle from the outside. There is a badge that says "Hybrid." That means there is an electric motor under the hood, attached to a gas-powered one. Infiniti is not a stranger to sustainable offerings with hybrid versions already sold on the Q50 and Q70.

This driveline is different, however. Instead of a VQ series V6 connected to an electric motor, there is a four-cylinder. Wait – it gets better. This is not just Nissan's QR25 2.5liter four that found a home in almost every car that does not wear an Infiniti badge. This one has a supercharger on top of it.

The mind has been blown – perhaps like the engine. Let us get this correct – there is a blower on top of a four-cylinder engine, connected to an electric motor, a lithium-ion battery pack, and a continuously variable transmission. This is the solution Nissan and Infiniti came up with to placate the upcoming fuel economy requirements, while maintaining the same performance parameters of the standard V6.

It brought up some questions whether this is a suitable, more sustainable option to normal V6 power in the QX60. One wondered if the 15 horsepower (250 in the Hybrid, 265 in the VQ35) and the 5 pound-feet of torque (243 in the Hybrid, 248 in the VQ35) drop would make any difference in terms of performance.

For one, starting off exposed a lag in performance. You could blame the electric motor or the CVT – or both. Off-line performance started slow almost every time. This issue is easily remedied by turning the Drive Mode knob. Flip it to Standard and the throttle will open up. Flip it further to Sport, and the throttle is wide open. The electric motor is still in play, but only on regenerative braking. The driveline is also quiet – just like the first push of the start button. As a luxury crossover, you expect it to be quiet when commuting or getting groceries.

Once inside, there are a few subtle differences to denote the Hybrid over the V6 QX60. The only gauge that speaks "Hybrid" is the one on the left dial of the instrument panel. It is a simple regeneration-to-power gauge – that is all. Everything is shared with all QX60s. If you do not focus on regeneration-to-power gauge, this Diamond Slate QX60 Hybrid has a lovely Java leather interior with Maple interior accents.

Luckily, a lot of the earlier JX35's impressions ring true in the QX60. The seats are huge and invite you to relax and command the road. Seats are both heated and cooled – in this case, the ice cold cushion was welcomed on a heat advisory that permeated Minnesota for a day. You get three rows of seating, though you could set it up as a two-row limousine that would be the envy of an Uber driver. This model has two screen of second row entertainment, complete with wireless headphone and a remote for the DVD player. 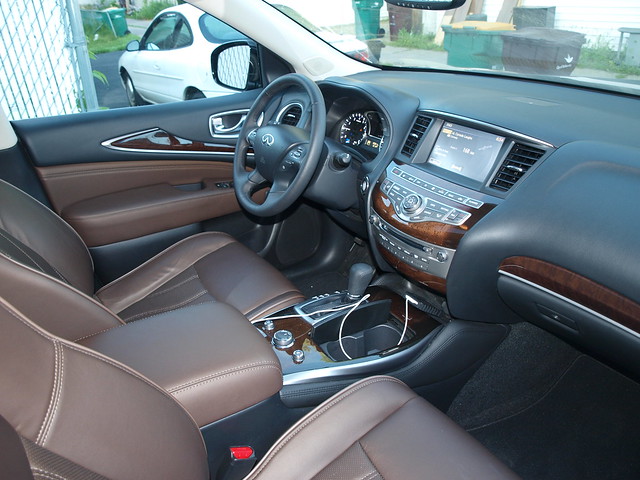 Driving the QX60 Hybrid is no different than the V6 one. The ride is soft and supple. There is a bit of roll in the turns, but subtle enough to keep going. You could change things up by switching the drive mode knob around. For example, steering feel is soft in Eco and Standard, but if you put the drive mode knob into Sport, it will weight up and keep things under control.

After considering all of these points, you might think we forgot about the real hybrid part of this QX60. There is one not-so-subtle reminder of the electric motor under the hood – the braking system. Because of the regenerative system, one would have to brake earlier to achieve a good stop. Panic braking is quite good, however.

The ultimate test for any Hybrid variant of any car is fuel economy. The QX60 Hybrid did turn an average of 24.2MPG – a very good figure for any mid-sized, three-row luxury crossover. 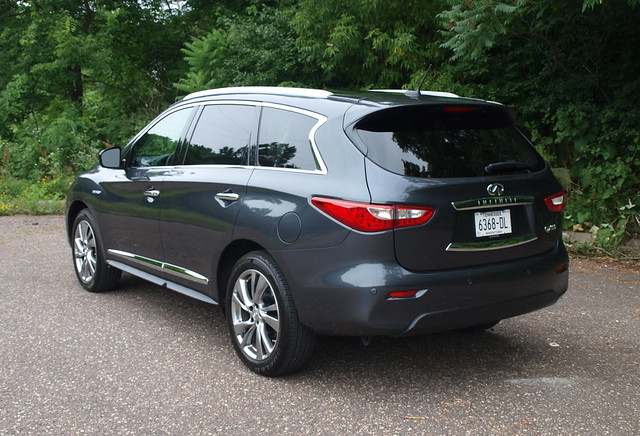 It was good to revisit the QX60. It is one of those offerings that offer an image and a level of luxury that is desirable. Though the Hybrid achieves a better fuel consumption figure than its mortal competitors, this crossover truly comes alive with the V6. That is not to discount the Hybrid though with a few settings, it will achieve similar performance figures as the V6.

In comparison to the last time I had the JX35/QX60, what rings true about the basics – space, comfort, equipment levels and design – still attract luxury crossover buyers to Infiniti showrooms. It is the best product for families amongst the four QX offerings based on value and capacity. It is worth the look if you are in the segment and want three-row capacity.