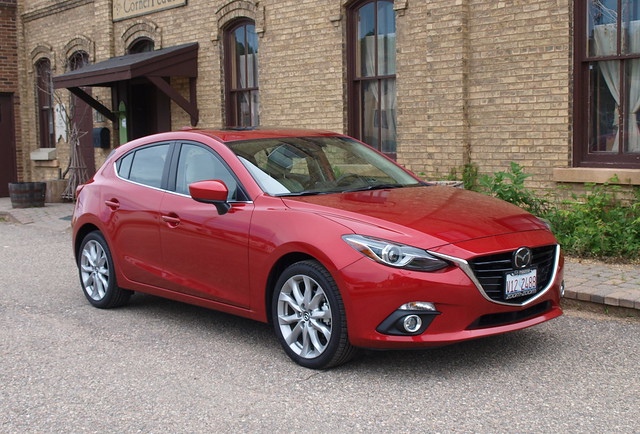 This could be the best compact car in the market.

The fact is the 2014 Mazda3 was designed for excellence at every turn. Most of the automotive media corps walked away with that summation. It has been quite a wait to find out if those who loved the Mazda3 are right. There has been a lot of anticipation to find out the truth about the Mazda3.

As you know, I love Mazdas. They are one of those car companies that truly build exciting cars for their respective classes. My reviews of the 2014 CX-5 and Mazda6 are in agreement with this summation. It is the 3's turn. My line about Mazda’s newest compact was this: "It better be good."

To start with the look, the new 3 was designed with the latest look from Mazda, called "KODO – Soul of Motion." The result is an aggressive design with a huge mouth, evil eyes and muscular fenders. From the windshield, the car turns into something sexy. There is little distinction between the sedan and hatchback, unless you point out the nuances between the two towards the rear. Our tester happened to be the hatchback with a sleek and fluid shape leading down to the rear bumper. All doors open up to near ninety degrees and the hatch is wide and easy to load cargo in and out of.

The S Grand Touring model – the top of the Mazda3 lineup – adds aggressive eighteen-inch aluminum wheels wearing Dunlop SP Sport 5000 tires. In all, the car simply looks stunning. The look is distinctive enough to point it out in a parking lot. 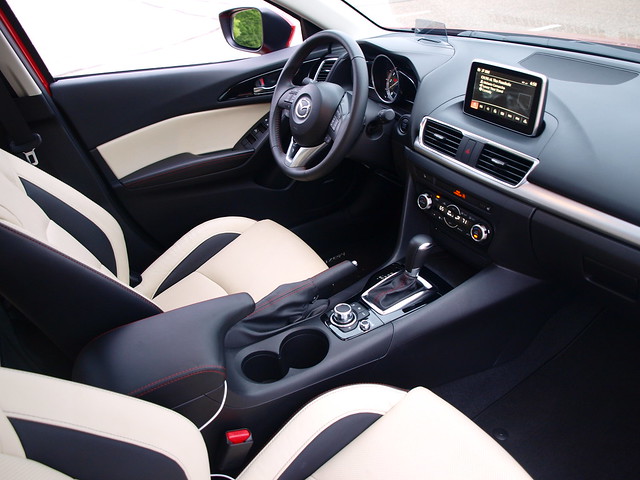 Mazda went with some European flair in the new 3. The first thing you notice is the Mazda Connect screen on top of the dashboard dead center. That houses the most improved infotainment system around with a cleaner and quicker screen for navigation, audio, phone, rearview camera, and other vehicle functions. It is a touch screen, however you can also use the knob and a series of buttons on the console for better control of the functions within Mazda Connect. The entire system is very intuitive and easy to use. Nine Bose Centerpoint speakers provide excellent sound quality throughout the cabin for satellite radio, music files via Bluetooth or USB connection, streaming music apps, and HD Radio.

The instrumentation is different, with only a tachometer in the middle of a three part cluster. Speed is read by a digital display, using the same readouts as the side screens for trip, economy, and vehicle readouts. On this model, there is a heads-up display showing speed and cruise control status. Climate control is low on the center stack, which is also easy to use through buttons and knobs. All controls are good to the touch and intuitive – including the column stalks and steering wheel controls.

The perforated leather seats are best described as firm for drivers who want optimal control. Bolstering is right, locking many bodies into the driver’s seat. Power adjustments for the driver are available for height, rake, angle, recline and lumbar support. Rear seat room is best for children, but four average-sized adults would be able to ride together inside of the new 3 hatchback. However, rear headroom would be a problem for taller passengers. 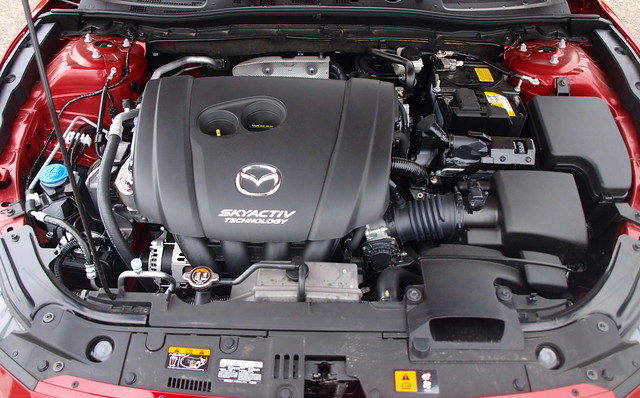 There is a choice of engines for the new 3. You can select from a 2.0liter Skyactiv four-cylinder with 155 horsepower for the I models. Our tester had the bigger 2.5liter Skyactiv four-cylinder with 184 horsepower. This engine is connected to a six-speed Skyactiv Drive automatic transmission sending power to the front wheels. This combination is absolutely terrific, with quick shifts and fluid power to propel this 3,002 pound compact hatchback with ease.

Driving the new 3 reveals an excellent balance between the ride and the handling. While it gets through the curves with nominal roll and lean, the 3 rewards you a smooth ride that absorbs the cracks and other hazards. You may end up hearing some of the cracks, but the cabin is quiet enough on smoother roads. Steering control is magnificent – perhaps the best in the class. Wheel response is good and has great on-center feel. Braking is superb showing quick response on normal and panic stops. If you take one on a nice curvy road, you will find the Mazda3 S just amazing to drive.

The braking system gets an assist from the new i-ELOOP regenerative system. The system is used to recover energy to operate electrical components, such as the climate control and the power steering system. Another piece of the braking system is the Smart City Braking Support. Using radar technology, the brakes will be applied if an obstruction ahead is determined by the sensors as unavoidable. This works only is very low speeds. Radar technology also drives the cruise control and forward obstruction warning system. The 3 is also equipped with blind spot monitoring – all part of the Technology Package. 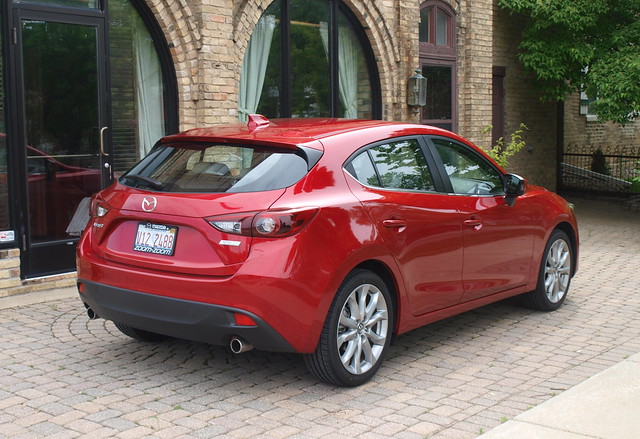 The Mazda3 has a wide price range, starting with a 2.0liter I SV 4-door sedan model and a six-speed manual for $17,740. Our loaded 5-door S Grand Touring 5-door hatchback is on the opposite side of the spectrum with a sticker price of $30,190. Somewhere in the middle is the right combination of features, performance and technology that is right for you.

So, how good is the Mazda3? It is pretty damn good. Shall I say "excellent," "great," "superb," as well? Seriously, Mazda did a cracking job on their compact. But, is it the best in the compact class? If you must ask, then yes.

In the midst of testing the Mazda3, I was presented with the question: "if you love the Dodge Dart so much, which one would you get?" That is a tough one to answer. Each had their own argument to make. Not to drill down into these arguments, but if I must compare apples to apples, the Dart GT is less expensive than even a Mazda3 S Touring 4-door sedan – only $500. However, the Mazda3 outsold the Dart in May, 2014 by less than 2,000 units.

This is a good problem to have – the choice of two V&R favorites for compact car superiority. At this point, the favor goes to the Mazda with its additional active safety features on this S Grand Touring hatch. It proves to show that comparisons are never fair.