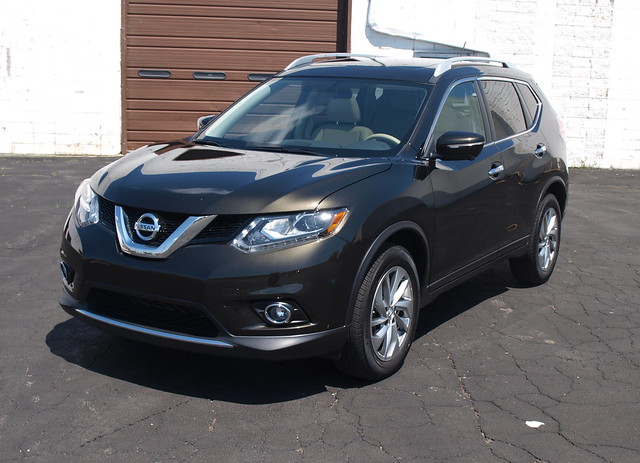 A Victory & Reseda review of the 2014 Nissan Rogue

"The Rogue is Joe Average – the friend you take anywhere without any drama or stress."

That was in April of 2012, when the first generation Rogue made its third and final visit to V&R. It is a nice crossover, perhaps the most unsung of the class. The previous Rogue did everything competently in a friendly manner. That was why I summarized it as such – a friend to those who drove one.

As part of a product renewal program, Nissan unveiled the new Rogue. This is not just a new design, but an all-new vehicle – part of a global crossover program. Of course, looking at a new version of a vehicle I had a lot of positive vibes with will require major scrutiny. In other words: This new Rogue better be good.

In comparison between the two generations, most of the dimensions between the old and new Rogue are similar – by an inch on the average. The new model is wider and weighs more by about 180 pounds.

At first glance, one could mistake the new Rogue with its larger sister – the Pathfinder. The design language is the same with sharpened lines and creases, including the uptick on the side rear glass. The front end has been sharpened with the familiar Nissan three-slot grille centered by its badge. LED lighting surround the headlight units, while high-positioned taillights help motorists behind distinguish whom they are following. Outward vision is superior in the new Rogue with a large windshield and rear glass.

By choosing the top model, the SL adds a bit more flair to the package. Eighteen-inch alloy wheels finish the Rogue off nicely. The Rogue was named by the Insurance Institute of Highway Safety a Top Safety Pick + – which will come in nicely with the Safety Shield suite of active safety features, such as blind spot monitoring, land departure warning, forward collision warning and moving object detection. 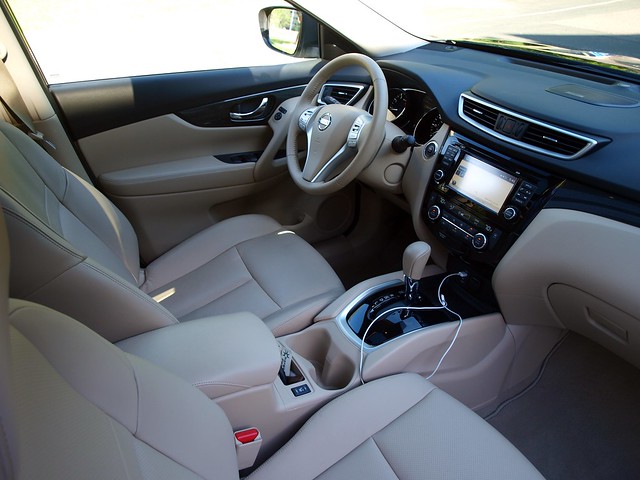 Choosing the SL also means enjoying a very luxurious cabin with soft leather seating and touch points all around. The Almond interior scheme matches well with the Midnight Jade on the outside – already giving this luxurious Rogue a feeling of opulence. While the outside may look like a Pathfinder, the interior has an Infiniti air to it.

The front seats are big and comfortable. There is a hint of bolstering and support, but they are really designed for comfort for long hauls. Second row room is superb with more than enough leg and head room for at least two adults. You could also opt for a third row of seating.

Nissan's instrumentation design has taken another step forward. The TFT screen between the speedometer and odometer is larger with more visible information and graphs that are usable than any other Nissan model. Instrumentation is positioned just right for any driver's sightlines. Controls have a good touch and feel on the stalks, the dashboard and on the steering wheel.

The center stack is not only handsome; it also has a larger TFT screen for the infotainment system compared to the previous Rogue. The reversing camera also includes Nissan's Around View Monitor giving you a 360-degree field of vision as the car is put into reverse. Bose provides nine speakers – including two subwoofers – of excellent sound with your choice of radio, SiriusXM satellite radio, music file playback via Bluetooth or USB connection or connecting with iHeartRadio or Pandora via the NissanConnect app.

The cargo hold is plenty big – 39.3 cubic feet with the second row in place, 70 cubic feet with it down. The cargo floor has a trick using two adaptable cargo pads. Nissan calls this Divide-N-Hide. The front-most pad could be used as a cargo shelf/cover, while the rearward pad could be lowered further to meet the spare tire cover for more depth. You could place both pads together to meet the liftgate opening. 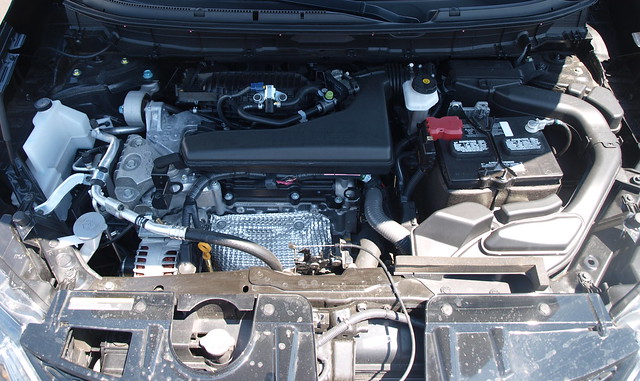 One engine is available on the new Rogue: a 2.5liter four-cylinder engine with 170 horsepower on tap. This engine seems happier in the new Rogue, in part to the improved Xtronic continuously variable transmission and all-wheel drive system. Though it has 3,605 pounds to run, along with a 1,000-pound towing capacity, this driveline just seems content with simply going about its business. If you must go off-road, you can do so with hill descent control and other electronic aids to ensure you traverse the way to your favorite fishing or camping spot with ease.

Driving the Rogue is relaxing. The ride is soft and supple to stretch out the miles for both driver and passenger. Having a soft ride means being soft in the corners with enough noticeable roll and lean. Yet, it is controlled to keep the Rogue on course and steady for everyone on board.

The steering has a great on-center feel with a smooth turn-in and good reaction from the wheel. It does feel a bit soft, but it has a good turning radius for tight maneuvers. Brakes were OK, though pedal feel is on the soft side. It does manage solid stops in both normal and panic situations.

Its high ground clearance comes in handy when having to get through some ugly terrain. The all-wheel drive system does a very good job managing weather on any surface. Eighteen-inch Dunlop Grandtrek tires kept the Rogue on course in the wet while its all-wheel drive system worked hard to plant them on wet surfaces. There is a lock button when you need maximum traction in worse conditions.

Nissan is touting good fuel economy for its newest version of their small crossover. The CarSoup.com team achieved an average fuel consumption figure of 27.0MPG. Nissan claims it would average 28MPG. 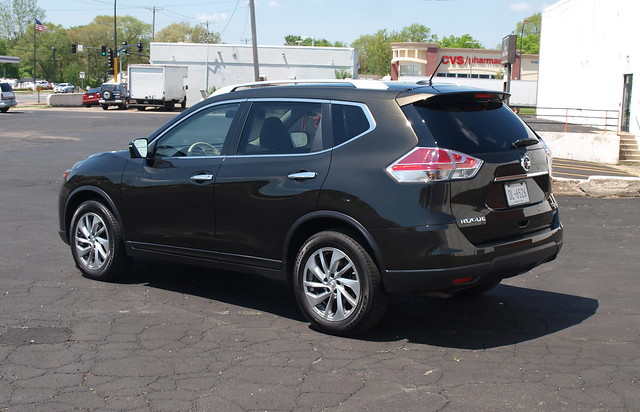 The Rogue lineup begins with a basic S model with front wheel drive. That alone costs $23,650. Our SL model with all-wheel drive and the Premium Package upgrade came out to $32,395. If you are looking to add a third row to your Rogue, you have to get the Family Package available on S and SV models.

Believe it or not, the previous version of the Rogue is still available – they call it the Rogue Select. If you want one with the same 170-horsepower engine and front-wheel drive, it will cost you only $20,900.

The two Rogues are indeed different in what they do. Yet, the new Rogue simply feels more refined, mature and content with itself. That maturity is traced to its new look and aspiration to become a leader in the class. The luxury feeling inside the Rogue SL is unmatched in its class. There is also maturity in the way it drives – comfortable for families on the go.

I can no longer call the new Nissan Rogue "Joe Average." It has been elevated to a whole new level. This old friend may have fancier clothes, but we would hang together – maybe at some nicer places now.