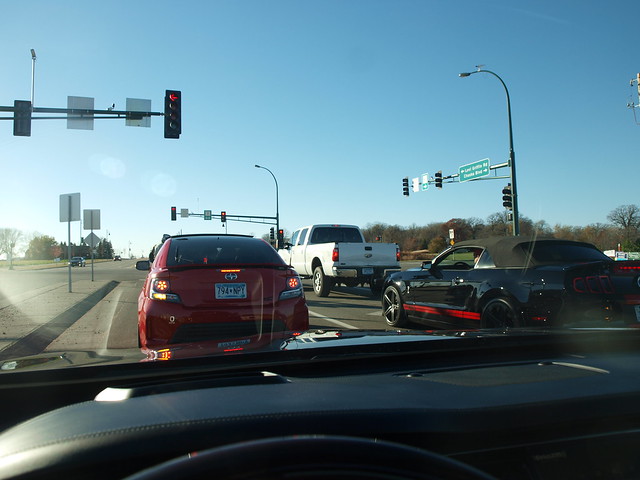 One of several highlights in 2014 for V&R. Photo by Randy Stern

By looking back, I suppose. Checking out the highlights of the year, as it closes. It was a full year where change and progress occurred. It had its ups and downs, frustrations and triumphs. Yet, I am still standing. So is V&R.

DON'T CALL THEM JUNKETS! This year yielded some adventures with OEMs. In June, I flew to Detroit to join FCA US LLC at their annual "What's New" event. It was their Chelsea Proving Grounds that I drove the 2015 Alfa Romeo 4C on their skidpad. That was crazy and thrilling at the same time. The next month saw me join Hyundai in driving the 2015 Sonata at the MAMA luncheon near Chicago, then onward along US Highway 12 to Ann Arbor. As a bonus, we had some of sweetest root beer even known to humankind – right in Southwestern Michigan. Later that month, Chevrolet invited me to join them at Major League Baseball's All Star Game at Target Field to see their sponsorship of the game and the event. Sadly, that was the only MLB game I attended during this past season.

HOW MANY AUTO SHOWS? Aside from Chicago and Los Angeles, I made sure to patronize my local auto show in Minneapolis and to visit up in St. Cloud for their show. Chicago and Twin Cities are annual stops, but Los Angeles seemed improbable. With some help, I made it. Lots of great things happened at all four shows.

#CARMMUNITY RULES! If there was a theme for this year, it was to witness the rise and fall – and rise – of the Carmmunity. In the Twin Cities, I witnessed how transition works – one meet shuts down, a another movement rises. To witness the ebb and flow of the Carmmunity through new experiences – my first Back to The 50s, driving with a cruise group, witnessing a bit of the Central Crown rally, connecting with other clubs and groups, etc. – expanded the idea that drives V&R today. It is the experience that frame what we as enthusiasts of all stripes do.

DREAMS STILL DO COME TRUE: In terms of vehicles driven for V&R and other places my byline resides, a lot of firsts occurred this year. Subaru, Fiat and Mercedes-Benz were new to the rotation. The latter still stuns everyone – how could I review an S-Class? No, wait, an AMG model with a sticker of $164,000?!? I also welcomed two new vehicles prior to retail delivery – both from FCA US LLC. Plus, I drove a Porsche, Maserati, Alfa Romeo, Land Rover/Range Rover and Mazda MX-5 Miata – each for the first time in my life. These were vehicles that I loved from afar, but never had a taste. I'm still stunned at what I accomplished vehicle-wise for this work.

HOW TO TURN 50 AND REALLY CELEBRATE: My actual birthday was the day before media days at the Chicago Auto Show. I wanted to do something special to mark the occasion. The day after my obligation to the show ended, I flew back home to L.A. My first stop was Reseda – my hometown. I saw what the Reseda Neighborhood Council was doing and things are indeed looking positive. I also saw some glimmer of a parallel universe with car culture still in tact there. Added stops seeing my brother and his family and visits to two museums – Toyota and Honda – added context to an amazing visit back home. Who knew I would return several months later – this time for the L.A. Auto Show.

"FLY, BE FREE!" The words of the late Robin Williams (as Mork) seems apt for this new chapter in my professional life. I am a freelancer. I have clients to fulfill. I may be adding more in 2015. In the process, I refocused V&R as a place where I can tell my story about the automotive experience. We need more storytellers in this business.