Sixty years ago, one of the greatest cars ever made in America was born. It was as advertised: 300 horsepower from a hemispherical head V8 engine. After years of the Forward Look, the Letter Series and the Fuselage body, the Chrysler 300 was relegated to the shelves of history.

Sixty years ago, one of the greatest cars ever made in America was born. It was as advertised: 300 horsepower from a hemispherical head V8 engine. After years of the Forward Look, the Letter Series and the Fuselage body, the Chrysler 300 was relegated to the shelves of history.

A couple of attempts to revive the nameplate went for naught, even as they were attached to a couple of Cordoba mid-sized coupes. The 1990s opened the door to revive the 300 using a second generation "cab forward" model. It was designed to a "five-meter" car, ripe for European markets under DaimlerChrysler's "merger of equals." Though it was on a front-drive platform and offered in a four-door sedan, the spirit of the 300 began to return into the psyche of American car-buying public.

Ten years ago, the next chapter of the famous nameplate arrived. The DaimlerChrysler developed platform took elements from a previous generation of Mercedes-Benz's E-Class and produced a rear-drive platform that would cement the future of the brand. The Ralph Gilles-penned 300 survived the sale of the Chrysler side of the Daimler house to a private equity firm, bankruptcy, the gradual sale to Fiat, a major update to the model and the arrival of my good friend Al Gardner.

Who is Al Gardner? Officially, he is the CEO of the Chrysler brand. Unofficially, he was the one responsible for my witnessing the unveiling of the mid-cycle refresh of the second-generation LX platform Chrysler 300.

Gardner and I chatted before the press conference at the Los Angeles Auto Show of the 2015 300. I found him witty and charming, which is refreshing coming from an automotive executive. At the "What's New" preview I attended last year, Gardner invited me to come to L.A. for the unveiling. I asked why. Gardner did not state. But I knew what it was. The 2015 Dodge Charger and Challenger were unveiled months prior. I was a matter of connecting the dots and making the right assumption. 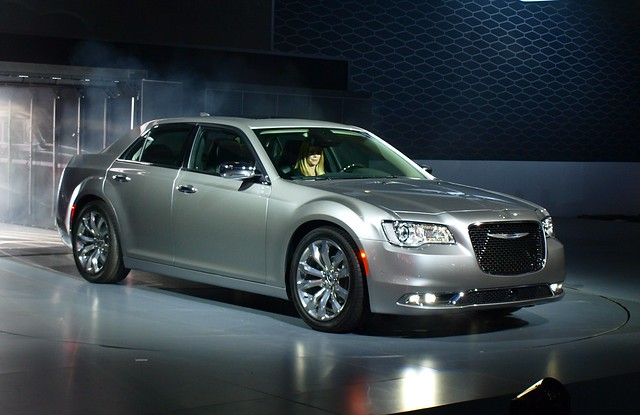 A year later, I noticed that a 2015 Chrysler 300 was placed on my schedule. At a recent FCA event near Detroit, I ran into Gardner and chatted a bit. I mentioned I was getting the 300 in for review. He said that he was eager what my thoughts were.

Before I dive into my full impressions on the mid-cycle refresh of the second generation LX platform Chrysler 300, let me start by saying that only a few cars – or series of cars – put a smile on my face whenever one is in my view. The LX platform is one of my favorite automotive architectures, and, in particular, the 300 always gets my attention. They are compelling to look at. They also spawn the most debates on design, demographics and related pro- or anti-Mopar talk.

I had a handful of the LX platform 300s during its ten-year run. The reality has been more mixed based on my reviews than what could be perceived based on my messages across social media and such. One could say that maybe I have not found the right Chrysler 300…just like I haven’t found the right guy to date…

Then, a 2015 Chrysler 300S AWD arrived. It came in Redline…a Dodge color, but very becoming for a sporty 300 model. It had the V6, which is a fine motor to begin with. Not to mention the eight-speed automatic transmission, a host of active safety features, a panoramic roof and a very nice set of leather chairs to take command from.

That sums it all up, doesn't it? Well…no. 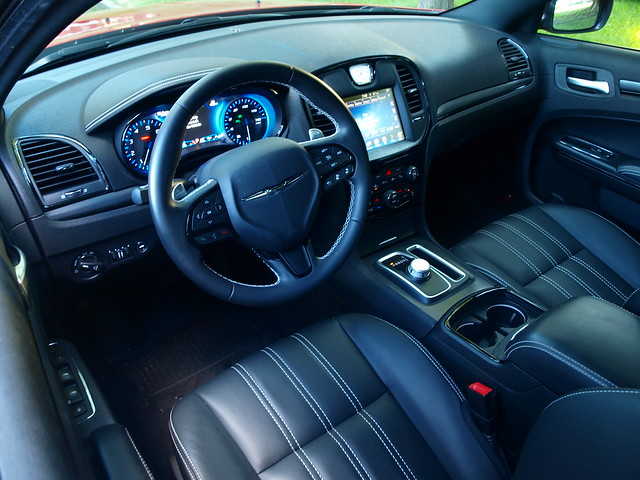 The sign of a car that satisfies the soul does not have to have big horsepower. Nor should it be something of dreams and desires worth hundreds of thousands of dollars. Nor does it have to be a classic. The reason why there are so many different kinds of automobiles, trucks, crossovers and SUVs is that there is not one singular soul to feed. Millions of individuals cannot share the same soul as everyone else. That would be boring and mundane. That means Ferrari would have to build as many 488GTBs as Honda makes CR-Vs.

My soul is different. It is one that embraces many different automobiles but reserve the softest part of the heart for a few. One of those is the Chrysler 300. It is not just one year or generation, but of many. It is a 60-year swath of great and powerful automobiles that elicit and evoke emotional reactions. The original from 1955 defined a whole new kind of American car. The provocative 2005 model that melded classic and modern design into something of an icon.

Then, there is this 2015 version. In all due respect to Mr. Gilles, but I like this one better than his 2005 design. The second generation design update adds serious boldness that was found on the 2005 300. The grille is as large as that groundbreaking model…and deep, too. It actually works well with the second-gen headlamp design. The fenders were given some steroids, finishing a look that is bold, expressive and aggressive. Why, yes, Mr. Gardner, I do like this. 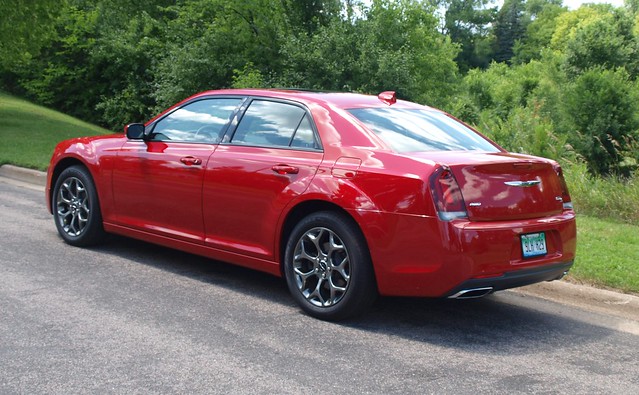 I've been always intrigued by the silhouette of recent 300s. With the second generation's larger glasshouse, the tall torso and blunt roof looks normal now. To me, it is both functional and distinctive. You can be sleek, stylish and fastback-inspired, but there’s nothing more classic-looking than a modern Chrysler 300. This is why I like them as much as I do.

In the 300S, there is a stark, but elegant cabin to live in. It is sporty, made more so with black chrome accents. Blue accented lighting helps to set the tone of this car. I found the seats in the 300S good enough to settle into for the job at hand. I could have three-to-four of my friends on board – but why? If I had to, they will be fine in a nice cabin that offers room for three others around my size.

For 2015, there were serious changes for the driver. The 300 gains a new wide TFT information screen that is very useful to get vehicle and trip information. The tachometer and speedometer were pushed out a bit further, but readable when I really need it. In all, I am well informed when I am behind the wheel.

To work the eight-speed automatic transmission, I now have a knob to do so. That, along with paddle shifters to fine tune gearing on the fly. The knob is fine. You'll get used to it. If you have not driven a Chrysler 200, a Ram 1500 pickup or any new Jaguar, Land Rover or Range Rover product lately, then you are in for a shock. If you embrace change, embrace the knob. 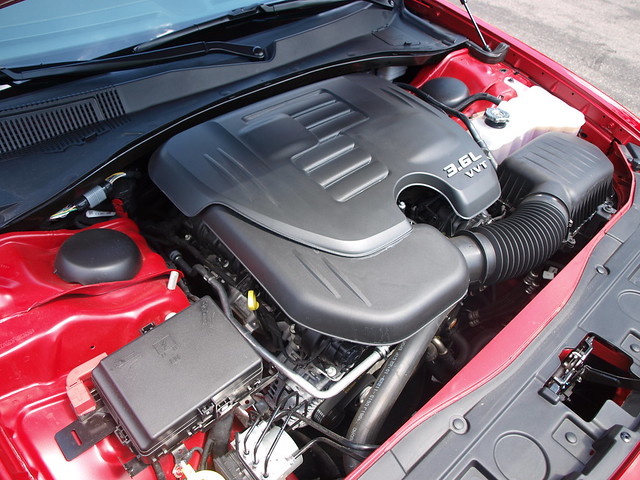 The Pentastar 3.6 liter V6 is a fine engine. It just is. It is powerful when you need it. Your right foot has 292 horses at your service. There is nothing but solid power through the gears, which are quick on the gear transitions. A button-activated Sport mode quickens those transitions, but also encourages the driver to use the paddles to induce accurate gear selection. The tester I drove was equipped with all-wheel drive. It is a good system the keeps all four Michelin tires on the ground when the surface is less conducive for traction and grip. The V6-powered 300S was also on the thirsty side, averaging 23.9MPG in my care.

For those who think that more power is the solution to everything in life, the 363-horsepower 5.7 liter HEMI V8 would be more desirable to drive in this model. I think the V6 is just fine. Besides, you cannot get AWD with the HEMI V8. Sorry, folks…

When you are driving the 300, you are keenly aware that it is a big sedan. What will surprise you is how well it rides and handles overall. Then again, it is no big surprise, because the Chrysler 300 always had a great ride and handling mix. It just feels more comfortable now, more competent and sure of itself. Perhaps, it’s just me. Maybe I'm feeling a little more confident with the 300's driving manners. That is always a sign of a good car in my book. If a car – or any vehicle – feels like my favorite pair of shoes, we’re going to have a great time together.

Of course, with confidence comes safety. The $44,055 300S tester came with a suite of active safety features, including Lane Keep Assist, Full-Speed Collision Warning with Active Braking, Adaptive Cruise Control, ParkSense Front and Rear Parking Assist…shall I go on? While active safety isn't sexy, it should be. Staying alert and alive is sexier than some of the people I run into on a location-based hookup mobile app.

That is exactly the point behind the Chrysler 300. One could nitpick on the details, bash it for some quirk that does not seem normal, and throw all of the "bad news" headlines at it to diminish its presence in the marketplace. Yet, I have some "good news." I like this car – more so than any previous modern 300 driven for this and other outlets I write for. It made me happy.

Mr. Gardner, you were absolutely right about this car.