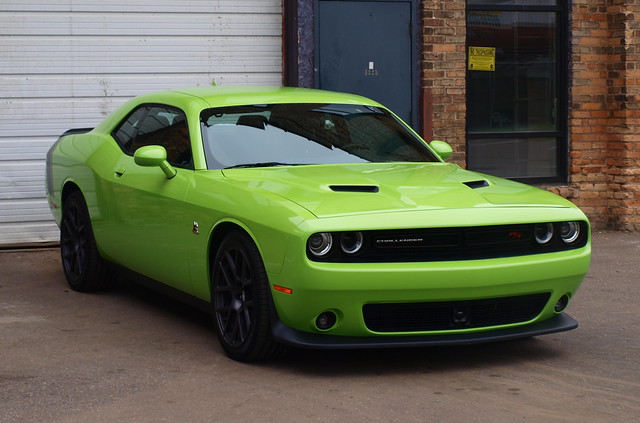 A Victory & Reseda review of the 2015 Dodge Challenger

The Dodge Challenger is a legend.

It is a car that melds the past, the present and the future in one high performance coupe. They remind us of an era where horsepower mattered – an era that has returned with a vengeance.

As legends go, there is a story. I did not expect to review this car for probably another several months. I figured that I would be low on the totem pole to even touch it at some event – which I did. It is a car I always had been a fan of – one that challenges my journalism integrity at times. We have our favorites and we sometime espouse of which ones they are. You get it – it is not bias that we fight, but rather balancing the petrolhead in most of us with working with our subjects.

In truth, I am a Challenger guy. I never drove an original Chrysler E-Body, though I spent a few years of my youth riding in one. I did drive the modern interpretation of one in 2010 – a V6 SE model. Though it had the old 3.5liter V6 under the hood, which was fine. It felt like what it would have been like to drove my dad's 1970 Plymouth Barracuda.

At my age, automotive appreciation is still something I take to heart. Then, I found out I was getting a 2015 Dodge Challenger R/T Scat Pack. All of the sudden, I flashed back to Christmas/Hanukkah in 1969. I sat on Santa’s lap asking for a 1970 Challenger. It was ridiculous to ask for one knowing it would be for naught. I still did not believe it was for real.

Then, it arrived. It was in Sublime with black strips on the rear end. It had the equipment level I was looking for. This was no longer a dream. The keys were in my hand. I became a couple of decades younger in a flash… 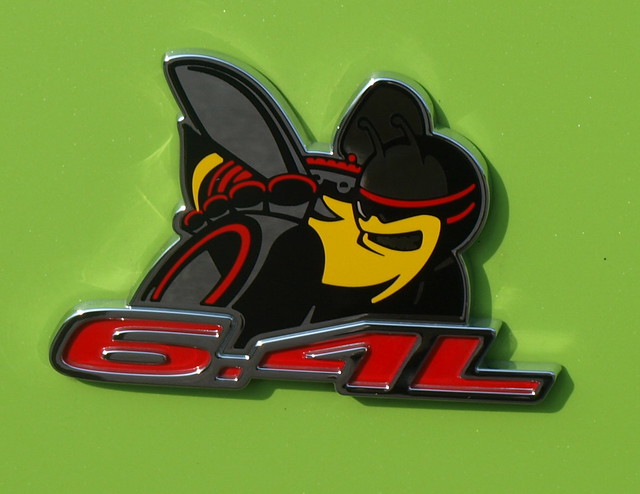 I could wax poetic about the emotional part of the experience with the 2015 Dodge Challenger R/T Scat Pack. However, I do have an obligation to review this car properly for you.

Before we go on, I need to explain what a "Scat Pack" is. The name was first used for a marketing program to promote Dodge's muscle car lineup in 1968 and connect with its owners and fans through newsletters and other related paraphernalia. For 2014, Dodge revived the name as a three-stage package that added more power to the Challenger, Charger and Dart. For 2015, the Scat Pack name is now an upgrade package to the Challenger R/T model. The biggest upgrade is under the hood, however there is more to this than just a name from the past.

From the outside, one cannot mistake the Challenger from any other car on the road. It continues the familiar retro shape that began in 2008 that reminded us of the original 1970-74 model. The notchback coupe design starts off with a long hood and a deep snout framed by quad headlamps. As with the prior Challenger, the inboard lamps are turn signals with LED lighting ring all four lamp units.

The big change for 2015 is a new grille texture. The dual cowl inserts are inspired by the 1971 Challenger. Some models have them in chrome, but not the R/T Scat Pack model. The grille is in monotone black with the Challenger name on one cowl, the R/T badge on the other. The 1971 influence is seen out back with split tail lights replacing the full length cluster of prior models. The Scat Pack comes with black 20-inch aluminum wheels wearing Goodyear Eagle F1 rubber, a huge finish to the look of this Sublime beast and its black stripes out back. In all, this Challenger retains its heritage, while continuing with its relevant look and stature. 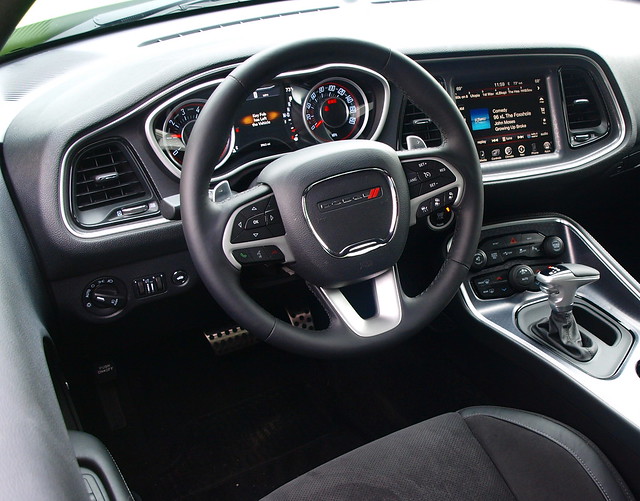 Compared to the 2008-2013 models, the huge change is inside. A new instrument panel is now more focused than ever, with the center stack canted towards the driver. The instrument cluster includes a larger TFT screen providing all vehicle, trip, fuel consumption and performance readings – including lap times, and lateral acceleration. You will find that some of these screens have been fashioned by the retro-designed tachometer and speedometer on each side.

The canted center stack houses the 8.4-inch UConnect Touch screen. In this model, the screen featured SiriusXM satellite radio, a navigation system, climate control settings, access to add apps to your infotainment system, and the Performance Pages. This is where you would be able to customize your drive mode settings, engage launch control and create settings for other performance-oriented readings. If you are more concerned with your sound, Alpine provides nine speakers throughout the cabin with a subwoofer included.

The front seats are huge with deep bolstering. The inserts are suede with Nappa leather bolsters and the R/T logo on the seatbacks, providing true track-inspired seating for the front occupants. The same upholstery is fashioned for the rear seat. Room is not as plentiful, though two children would be fine in back with appropriate safety seats.

The one retro touch that remains is the center console with a shape that goes back to 1971. The rest of the console is all modern, with a series of switches within reach of the driver below the center stack and the toggle gearlever for the new TorqueFlite eight-speed automatic transmission.

The 6.4liter V8 under the hood of the R/T Scat Pack used to power the Challenger SRT. While the new SRT gets the 707-horsepower supercharged 6.2liter V8, this engine – also known as the "392" – makes do with just 485 horsepower. Not that it is a bad thing…it is absolutely amazing. There is all the power you need with just a quick tap from the accelerator pedal. This engine has a soundtrack that is pure rock-n-roll with a mighty roar and a burble that would bring you back to the days when the muscle car ruled the road.

I love my exhaust sounds. I may prefer the classic tones of a fine Italian car, but there is nothing like the visceral tones of classic rock – or straight-up funk – coming from the back of a Chally.

To manage this power, the aforementioned ZF-designed TorqueFlite eight-speed automatic sends the 392's power back to the rear wheels. Normally a smooth shifting transmission, it has a heritage feel instead, giving you the feeling when engines and transmissions loved to take on the road instead of being caught in traffic. You could also choose a Sport mode where you can easily access the transmission through its paddle shifters for more track inspired gear changes while applying maximum grip down to the road.

Though it has a firm suspension set-up, the overall ride is much more compliant and comfortable on smooth surfaces. Rougher surfaces reveal resistance to the dampers, but not enough to cause concern. Balance is the best word to describe the Challenger R/T Scat Pack's driving dynamics. It corners as flat as possible, but with some give to make things comfortable.

No matter if you set it to Normal or Sport, the steering feels exact and weighted. There is absolutely no play in the wheel and it has a great reaction to each turn. The turning radius might not be tight, but wheel response is excellent to compensate on most u-turns. Brakes are very strong and sharp, thanks to its Brembo set-up and huge rotors on all four wheels. 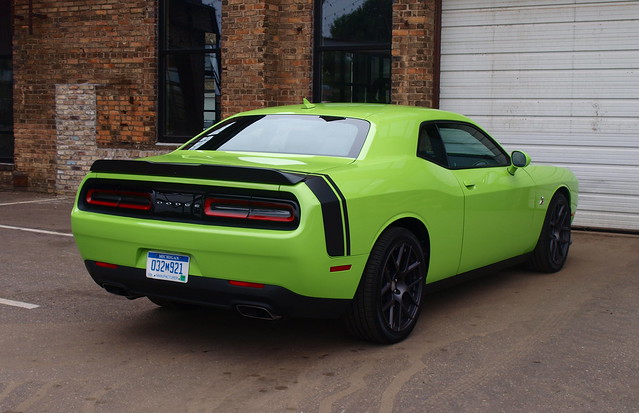 One does not buy a Challenger for its fuel economy. Using strictly Premium fuel, the R/T Scat Pack managed an average of 18.6MPG. This is above the average Chrysler said it would achieve.

The Challenger lineup starts off with a 305-horsepower V6-powered SXT model at $26,995. Our tester resides in the middle of the lineup – an upgrade on the R/T model – with a sticker price of $46,165 as equipped. If you are indeed ready to handle the Hellcat, pricing for the supercharged SRT model starts at $59,995.

The reason for this is simple: With power, comes responsibility. Yes, the 2015 Challenger R/T Scat Pack requires a lot of responsibility. Yet, it feels so wonderful. The exhaust noise is intoxicating. The tech is excellent. However, the one thing that got me loving this Chally is the combination of the 6.4liter V8 and the eight-speed automatic. The way it responds to my right foot is magnificent.

Another thing I found out is how much people appreciate this car. Whether it is the Sublime paint or the fact that it is a 2015 model, it got its fair share of looks and thumbs up. One Challenger owner escorted me to a car meet on its first drive. I showed up to subsequent meets with people peppering me with questions. For those who know the Challenger, they were the ones that embraced this Sublime 2015 R/T Scat Pack the most. For those who do not know…the Chally offered a lot of shock and awe.

For me, the Dodge Challenger is a car I would take seriously. However, it is the most fun anyone could have behind the wheel. That is how you achieve legendary status.