A Victory & Reseda review of the 2015 Ford Edge

Back in 2009, Ford sold six different SUV/Crossovers in North America. At the time, that was considered more than enough to make consumers go bonkers over choosing the right one. I wondered if perhaps Ford bit off more than they can chew in that market.

Perhaps Ford was onto something. Today, it is not enough for a brand to offer just one crossover or SUV. Customers now want choice. They also want a variety to choose from in terms of seating capacity, performance, drive system, safety equipment, cargo space and towing capacity. Ford certainly offered a choice of utility vehicles that would please customers by matching needs and wants in every case.

Even through the global financial crisis, Ford stuck to their guns by avoiding the Troubled Asset Relief Program (TARP) to concentrate on product. In terms of crossovers and SUVs, their gamble paid off. SUV sales at Ford are growing to the point where the Escape is outselling its One Ford brethren, the Focus and Fusion.

Part of this gamble was creating a two-row SUV that was larger than the Escape by offering more power and space for families on the go. The 2008 Ford Edge certainly received a lot of attention. They sold very well and fit within the means of families looking for something that was car-like, but sat higher for better ground clearance and safety. My review of that first Edge yielded some concerns about fuel economy and endurance for someone not familiar with such vehicles. Another Edge was used to test out MyFord Touch when it was first available. 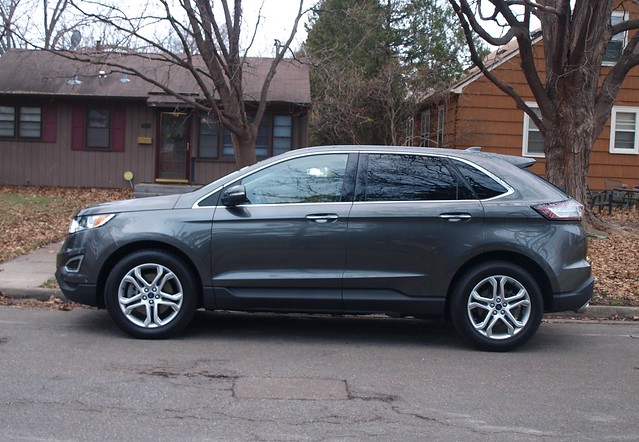 That last generation of the Ford Edge was OK. I simply was not vibing off of it. Maybe it was not for me. Based on my previous experiences with this vehicle, it seems that I want something lighter, nimbler on its feet, more user friendly and turning in better fuel economy.

With high hopes, I wanted patiently to get a chance to put the new 2015 Ford Edge to the test. I heard so many good things about the new version. From what I gathered, Ford addressed some of my concerns about the previous model. Am I putting my hopes too high? Or, did Ford deliver on the promise of making the Edge a true choice for customers looking for something in-between the Escape and the Explorer?

From looking at it, I have to say "yes." The new Edge is handsome and easier on the eyes. It fits both the evolution of the model's design progression, along with Ford's "Kinetic" design elements to fuse a rather nice looking vehicle. Up front, the "bulldog" look gives way to a new global SUV face shared with the Everest/Endeavor SUV from the Asia-Pacific region and the upcoming 2017 global Escape/Kuga. At this point, the Edge looks slimmer and svelte than before. The rest of the Edge also feels "lighter"and less bulldog-ish. The most dramatic view is out back with its current Ford design progression, yielding a slim horizontal light unit forged across the beltline of the rear end. A series of LED lenses illuminate a very entertaining tailgate.

This tester happens to be the Titanium – the most luxurious Edge available. Additional chrome accents adds more sparkle to a very nice body. 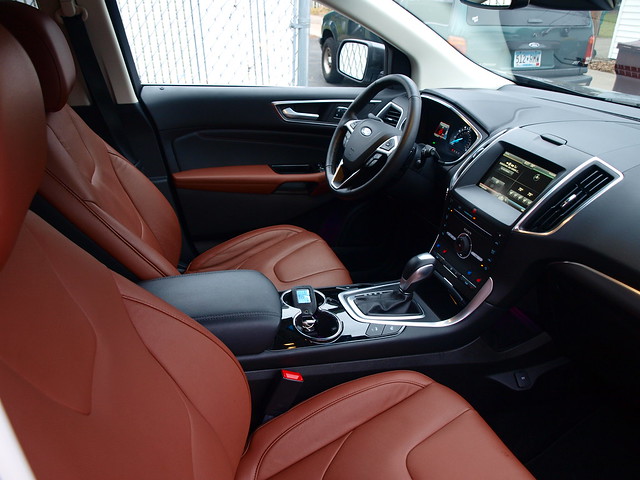 Before we go on, The Edge comes is plenty of trim levels. My choice would have to reviewed the Sport, with its supportive seats, blacked out trim and 2.7 liter EcoBoost turbocharged V6. However, the Titanium absolutely surprised me. Perhaps it was the Cognac leather seats that wowed the heck out of me. Those seats not only look fantastic – they are extremely comfortable and soft to the touch. Room-wise, both front and back seat areas are exceptional, accommodating many kinds of bodies in absolute comfort. All four doors open wide, almost to a 90-degree angle. The power-operated liftgate opens tall and wide for greater loading of luggage and a day's worth of shopping. All told, there is 39.2 cubic feet of space behind the rear seat.

The instrument panel should be familiar to recent Ford owners and customers. The instrument binnacle features a center dial with customizable side panels , proving more than enough readout options to keep you informed. The MyFord Touch screen is prominent above the center stack, with its quadrants for each touchscreen functions. Even with SYNC's second generation connectivity on board, it has never worked better – quick connections to smartphones and ease of setting up presets and other functions.

Perhaps it is time for a minor complaint. I found this to be true with MyFord Touch, MyLincoln Touch and the new SYNC3. For multiple banks of presets in FM and SiriusXM, would it be easier to allow for the flow between all preset stations using the steering wheel buttons instead of having to switch to one bank of presets to the other? Or, am I nitpicking again? At least the 12-speaker Sony system sounded pretty good.

This Titanium tester came with another solid engine choice for the Edge – the 2.0 liter EcoBoost turbocharged four-cylinder engine. With 240 horsepower to play with, it is perfect for the job of pulling over 4,000 pounds of crossover over the miles. It never felt fatigued or underpowered. It is simply just right. A six-speed automatic transmission and a solid all-wheel drive system rounded out this tester's driveline. The transmission is smooth between the gears and offer the option of paddle shifting for better gear selection. 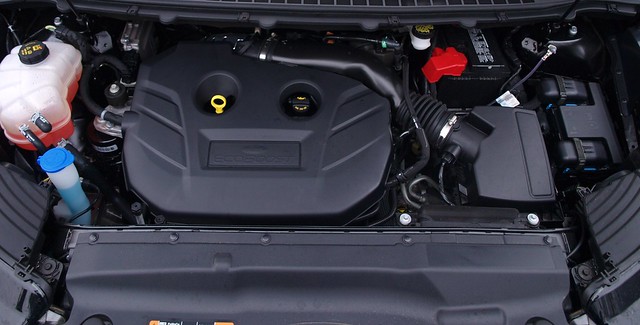 For everything you ask of it, the Edge delivers with a smooth ride that tries its best to absorb the road. When the roads are less than ideal, the Edge works overtime to keep things even, though it will react to these surfaces without jarring everyone on board. Handling is soft on the Titanium, as it is dialed in for a more luxury ride. However, roll and lean is not pronounced as one would expect from a softly sprung vehicle.

There is some numbness from the steering, yet it seems to do the trick. The turning radius could be a bit tighter, but it will get you out of tight situations quite easily. Brakes are also quite solid in normal and panic situations. This Titanium also came with blind spot monitoring and lane keep assist, which uses the steering system to keep the Edge in-between the lines.

I had been hoping for better fuel economy than I experienced in previous Edges. In this Titanium AWD model with the four-cylinder EcoBoost, I did manage an average fuel consumption figure of 21.4 MPG. It is indeed a step in the right direction, although the sticker shows that this particular vehicle would average 23 MPG. Fair enough…

This 2015 Ford Edge Titanium AWD with the EcoBoost four-cylinder came with a sticker price of.. $43,190. Keep in mind that the 2016 Edges are arriving at showrooms about the time of publication of this review. Therefore, a front-drive 2016 Edge SE model has a base price of $28,700. For a 2016 version of this tester, the difference is only $395 more. Then again, Ford dealers are willing to deal their remaining stock of 2015s, so you might get a sweet price on something similar to the one you reading about here. 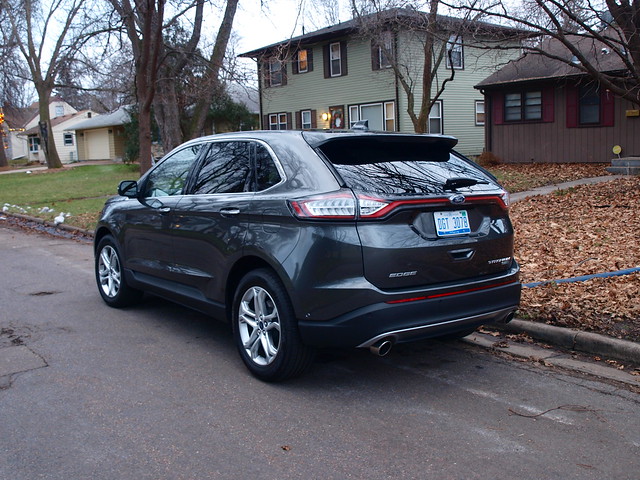 With so many choices in crossovers and SUVs, picking the right one is a chore that is not as easy as one would think. Usually one would consider price and their needs for now, instead of five or ten years down the line. To the families reading this review – consider that your children will grow. A vehicle designed for them to grow into is better than selecting a vehicle that they grow out of. This would be my thinking behind considering the Ford Edge.

For what it does, the Ford Edge is a better vehicle than before. My own patience certainly paid off to find how useful, comfortable and smooth this two-row SUV has become. If it fits where you are in your life, get one.