It goes beyond just the number of vehicles sold in a single year. F-Series sales represented a 3.5 percent increase over 2014's numbers. This was also the first full calendar year the new generation F-150 was available for sale. The increase may seem small, but it showed consistency based on product loyalty and the willingness of its customer base to embrace the new aluminum cab and box construction that challenged the thinking of truck owners.

The combination of aluminum cab and box construction, melded onto a rolled steel frame and powered by a choice of two twin-turbocharged V6 engines might have spelled disaster for Ford, but they executed it well. The result was yielding the North American Truck/Utility of The Year last January in Detroit.

On a greater scale, selling the kind of volume Ford does for its F-Series trucks may have signified something even more important. It appears that the economy has escaped from the 2008 global economic crisis. The modest increase had been a trajectory that helped reaffirm Ford's decision to concentrate on product development rather than take Federal monies to get out of the lowest economy downturn since the Great Depression. That took guts and gumption – the exact driving force that created this latest rendition of the popular F-150 pickup.

Back in April of 2015, I welcomed two new F-150s for review in two of my outlets, along with a comparison between the two on here. The conclusion was simple: It is better than ever. 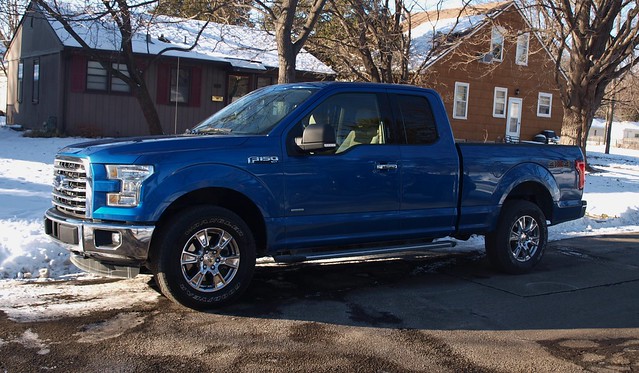 With the arrival of a third 2015 F-150 within 10 months, I had to prove my conclusions again. This time, the aluminum pickup came about in the worse part of the calendar year when winter would turn into an arctic experience in Minnesota.

There was a welcomed twist to this story. Instead of some fully loaded model in some luxury trim with sticker prices that would induce shock, this F-150 came with an average equipment level that most truck customers would actually buy.

The reality is that the average truck customer does not want a Lariat, King Ranch, Platinum or Limited model. They want an XLT with cloth upholstery. They want a few luxuries, such as SYNC, the chrome package and an extended cab. Most customers would desire the SuperCrew with its huge rear seat area, but others would be content with the SuperCab configuration as sampled for this review.

Before I dive into this truck further, there is some history here to discuss. Did you know that Ford introduced the first extended cab for full-sized pickups? For 1974, Ford introduced the SuperCab as a way to expand practicality in a pickup, without resorting to a crew cab configuration. Back then, crew cabs were sold only to commercial customers. To add passengers or to protect tools, bags and other goods inside the cab, the SuperCab was developed for additional room behind the front bench seat. Jumper seats were available for rear passengers, but they were really uncomfortable. It was an innovation that ripe for the time when more consumers were looking at pickups beyond their work capabilities. It also helped Ford propel the F-Series into being a sales leader.

Innovations were added to extended cabs, such as access doors behind the main cab doors. Where other pickups have changed their access doors to a smaller version of a front-hinged rear door, Ford continued to have rear-hinged access doors that gave wider access into the extended cab. In fact, they are the only one that offers such access to the rear area behind the front seats. In today's F-150, SuperCab doors open up to 180 degrees for better loading of items and people.

There is a flip side to the SuperCab. In today's pickup, there is a rear bench seat that sits at the back of the cab. For children, this is perfect. For adults, there is not enough leg room for proper utilization of the rear seats. This is why the most popular configuration among pickups is the crew cab – SuperCrew in Ford-speak. 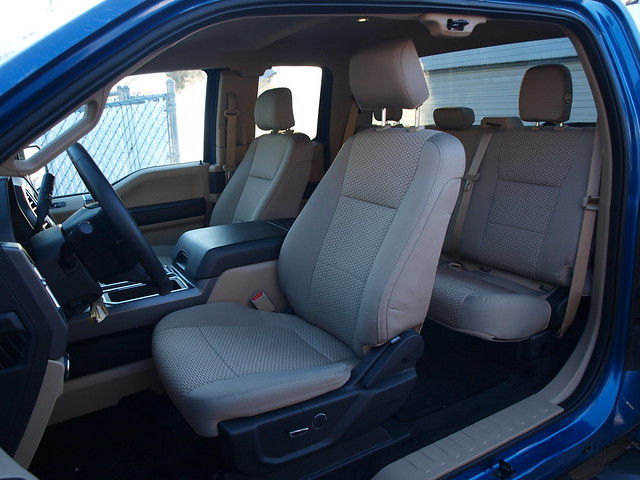 Ford's SuperCab is still very useful. Sometimes regular cabs can restrict optimal leg room or behind-the-seat storage. Sometimes, you can consider the SuperCab's rear area as a place for luggage, shopping – a trunk, if you will. Access doors help greatly to make these task easier.

The big data that has been floating around is on engine preference. This 2015 F-150 is equipped with the 2.7-liter twin-turbocharged V6. This small blown V6 has 325 horsepower and 375 pound-feet of torque on tap, while turning in some fantastic numbers fuel consumption-wise. For the record, I achieved an average of 17.9 MPG, some of it thanks to the subarctic air that permeated the Twin Cities towards the end of my time here. It helped to have the Auto Stop/Start feature that allows the engine to relax at complete stops. From what I gather, consumers love the EcoBoost engine.

At this point, you are probably thinking that I am just spitting out demographic numbers and behaviors and not telling the story of this F-150 XLT SuperCab with the 2.7 EcoBoost engine. I get it, you want to know how I feel about this truck. Fine…

It is a good truck. It rides smooth, easy to handle, has plenty of power on tap and gets better-than-average fuel consumption figures. That's all…

No, there is more to the story. Whenever I review a vehicle, I have to take the perspective of "living with it." It has to become part of my daily routine – commuting to a jobsite, meeting with clients, doing errands and chasing the Carmmunity on the weekends. I have done this with plenty of pickup trucks – the two previously reviewed 2015 F-150s included. Of course, I have to convey how this SuperCab fared in my care.

There is a reason why dealers stock the XLT trim more than any other. Sticker price alone is not the only reason, but considering how much full-sized pickup trucks have become lately, the F-150 XLT is a very good value for the money. The cloth seats are comfortable, shifting from the steering column is fine and at least I get SYNC and a backup camera in the package. Yet, I would probably tick a few more boxes on the order sheet to match my own preferred equipment. For 2016, MyFord Touch has given way to SYNC3 to fulfill the larger touch screen housing. The larger screen means a larger backup camera screen. I am not a spring chicken anymore, so I need to fulfill my aging eyes with a larger view behind me, granted with assistance of the mirrors around me. 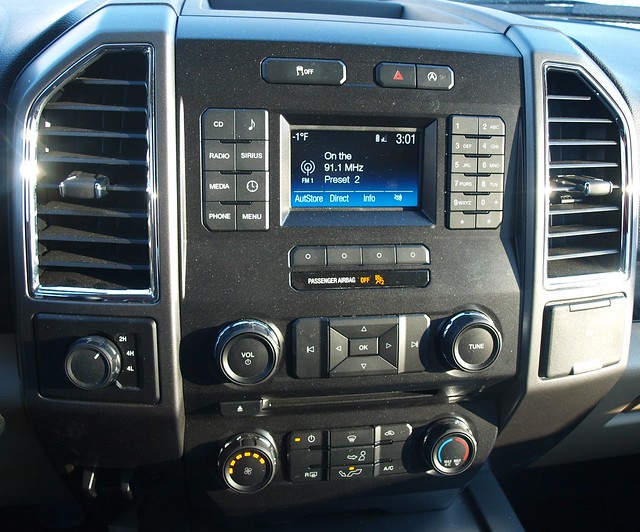 Truck owners would rather be concerned about durability than luxury. The XLT offers an easy-to-clean cloth interior, rather than a tough to maintain and temperature sensitive leather upholstery. As much as I appreciate luxury trims and its appointments, I would rather be more practical and enjoy my truck without pretense. The XLT trim says.

If I choose anything higher than the Lariat trim, I would lose the availability of the 2.7-liter EcoBoost for the thirstier 3.5-liter version. The 2.7-liter version is a fantastic engine, so it would be advantageous to stay with the XLT trim. However, I will make sure to get one with four-wheel drive and the excellent six-speed automatic transmission. Heck, I would add the FX4 off-road package on top of this.

One more thing: The aluminum cab and box construction. Did you know that this F-150 earned a Five-Star overall crash test rating from the National Highway Transportation Safety Administration? I knew about this and it is certainly a great selling point for the F-150. It makes me wonder whether I have been a fanboy for the wrong truck(s) all along. I am a true believer in safety. I would rather be safe than sorry.

The biggest quandary I have about the F-150 is in choosing the right cab. Most of the trucks I have reviewed has been crew cabs – both F-150s have been SuperCrews. Earlier, I pointed out that crew cabs were made to fit adults better than extended cabs do. The SuperCab is a great configuration, if it is just you, a spouse or friend and some kids to haul around. In my case, the SuperCrew would be the one I choose with its huge rear space for three adults to sit comfortably in. 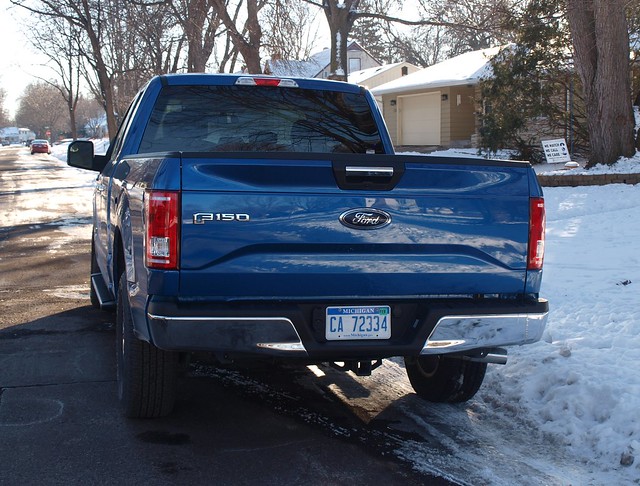 This is not really about me. It is about how the Ford F-150 has transformed into a truck worth looking at. Loyal customers to Ford will replace their current one with this one – that is a given. If one is considering a pickup truck and does not have brand loyalty, the F-150 presents an opportunity to at least experience the advancements made to this genre by this aluminum/steel mix of engineering and efficiency. Ford continues to maintain its sales leadership for the fact that its customers now accept the new instead of balking away from it.

That is your final answer.