A Victory & Reseda Review of the 2015 Nissan Rogue

Things were doing just fine. I was ready to take on my second Chicago Auto Show Media Days – the first since 2004. Yet, I needed to show I can write on a level worthy of taking this career to the next level.

The week running up to Chicago, I rented a car for the week. I can now reveal that my visit to the Hertz office in Richfield yielded a choice. The counter person, an acquaintance, pretty much made that decision for me – a 2011 Nissan Rogue S.

One point was made in that article – I wrote about that generation of Rogue before. The original write-up was also based on a rental in 2010. This second one would not be the last, as Nissan sent up a 2012 Rogue SV as one of the first OEM-supplied vehicles for review. Last year yielded the new generation Rogue for a full review published everywhere I had a byline.

You would think I had my fill with Nissan's compact crossover. Think again.

This one – a 2015 Rogue SV with all-wheel drive arrived following the death of Yukata Katayama, the mastermind behind Nissan’s rise in America in the 1960s and 1970s. I felt compelled to honor him by driving this vehicle for the week. I was also inspired to look back at my 2011 article to see how I fared with this Rogue – compared the last four previous times I had the opportunity to drive it.

I figured I would follow the format of the 2011 article and see what has changed – weather being a factor, of course! 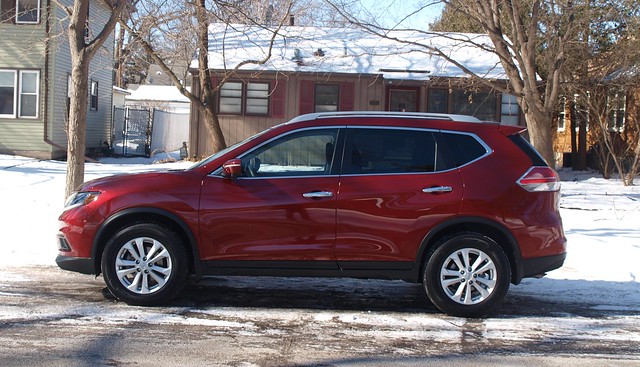 THE 2015 ROGUE AS A COMMUTER: It is strange to say, but I never stated what my commute route was to discuss this part. It is safe to say that a lot has changed in four years. My commute is absolutely non-existent (at this time). I work from home. In fact, part of the week, both my roommate and I worked from home. She conducted her business in her senior recruiting role and I did as a freelance writer.

Sometimes, my work takes me away from the "office." Monday yielded a photo shoot and final interview with a subject for one of my publications. The drive was not bad – home in Robbinsdale to the site in Maplewood. It was all freeway inbound, but traffic forced me to find an alternative route home. There was no hurray, really…

Subsequent days saw limited drive time due to assignments being accomplished with clients. The Rogue was driven daily just to compare notes from prior drives. It also had to do mundane things, such as seeing a tax preparer, taking my roommate to the airport for a very early flight and picking her up again upon her return.

The Rogue is designed to get you wherever you need to be. Though fuel economy was a bit disappointing – an average of 24.2MPG. I was hoping to match last year's model record of 27.0MPG, but the winter air put a damper on that. Nissan said it would average 28MPG. I believe you can achieve that.

THE 2015 ROGUE AS SHOPPING TROLLEY: There was limited opportunity to take the Rogue shopping. That is, if you count grocery shopping an opportunity. I did not buy much, but I did notice a universal theme of grocery shoppers. We no longer put them in the trunk. The critical part of a vehicle is the floor space behind the driver's seat. Shoppers put their goods in that area, especially when shopping solo or with someone else. I suppose this does not work when you bring the entire family with you to the supermarket. 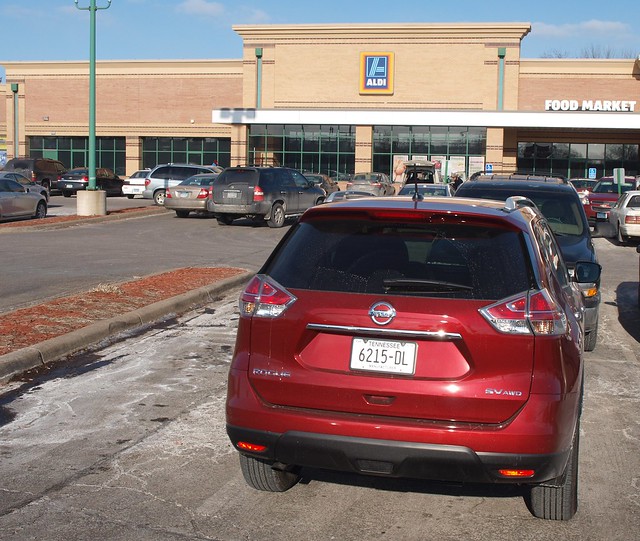 This is not to ignore the expansive space in the rear. I would consider how many flat-packed furniture pieces I would load if I wanted to do a room remodel. The amount of plants one could store in the Rogue would fill a decently-sized plot. The second row folds flat to expand this space to 70.0 cubic feet.

Incidentally, the Rogue could be equipped with a third row of seats. This SV tester was not equipped with them. The more you know…

There were two features missing on the tester. One would be a cargo net. A cargo cover did come with the Rogue, but having the cargo net would be great to protect grocery items or garden center yields from destruction and mess. Nissan also offers a cargo organizing kit as an accessory. This would be great for those using the rear for their daily haul.

The SV came with seventeen-inch wheels instead of the SL's eighteen-inchers from last year. Though shod with Goodyear Assurance tires, the all-seasons were fine in the dry cold and icy surfaces it encountered. It also helped to be prepared for any weather situation because of the taller tire sidewall on the SV specification since they usually do a better job in traction management and vehicle protection.

The Rogue is fine in the cold. It starts up when it should and never hesitates on the go. That is really all I ask from an automobile – rather, a crossover.

THE 2015 ROGUE AS AN IMAGE MACHINE: Consider this, if you would – the Rogue is much handsomer than its predecessor. It signifies he change in design by Nissan that also increased the size of its compact crossover, as well as sharpened its looks. I felt that was a huge positive last year. That was based on top of the line SL model. The SV is the volume seller and exudes an all-purpose look.

However, the Rogue SV speaks to the practical side of things. In realistic terms, this is what a family or someone in mid-career would have. Last year’s review model, the SL, is for someone who wants absolute luxury – as close as an Infiniti as one could get, as I remarked a year ago. For the everyday grind, the SV works out just fine. 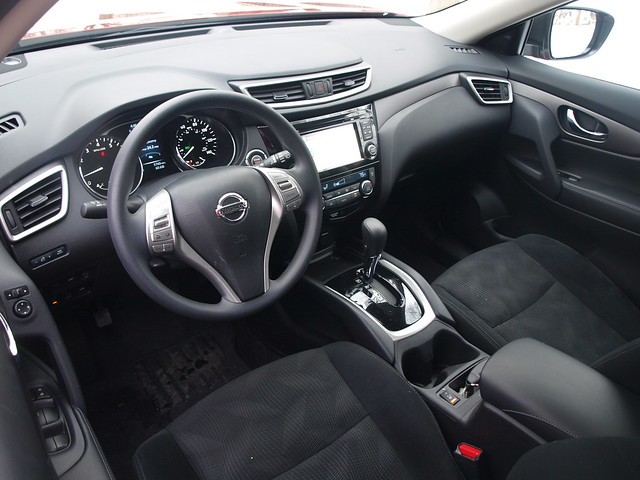 This $28,660 SV example is still equipped well. I get NissanConnect, SiriusXM radio, satellite navigation, Bluetooth connectivity and climate control. So what if the seats are cloth? If it gets you somewhere, you're fine!

But, will it make me a smarter, handsomer, and wealthier individual for owning one? That is a ridiculous question! Though I am middle-aged and single…

CONCLUSIONS: The Rogue is actually a nice compact crossover. I basically said this in 2011. Heck, I think I said it in every review I wrote on this vehicle – both generations, at that! You can still get the version I reviewed from 2010 to 2012 these days – they're called the Rogue Select. For less money, you get a handsome, shapely crossover that really put Nissan right square in the segment. However, they both have the same engine and transmission – the QR25 2.5liter four-cylinder and the Xtronic continuously variable transmission. You can get all-wheel drive in either model, too!

Honestly, this 2015 model is much better. Check both the Rogue and the Select out for size.

But, would you buy either Rogue over a Honda CR-V, Toyota RAV4, Mazda CX-5 or Ford Escape? Good question! I can tell you that two of the four listed are ones I would consider: The Mazda and the Toyota. Clearly, the newer Rogue has the comfort and cargo space to trump them both. Yet, my example had a few little issues – the infotainment screen and preset switch logic for the radio is a bit short of good and there were some rattles that I could not find anywhere. In the end, I would choose the Mazda driveline over the Nissan’s. The 2.5liter Skyactiv CX-5 is more responsive and consistent on returning great fuel economy. Still, the Nissan trumps the Mazda in cargo and rear passenger space and comfort.

Why not the Honda or the Ford? Don't get me started…the Rogue would be my pick over those two. Let's leave it there.

So, in conclusion, the 2015 Rogue will satisfy a lot of customers looking for a good balance in a small crossover. End of story… 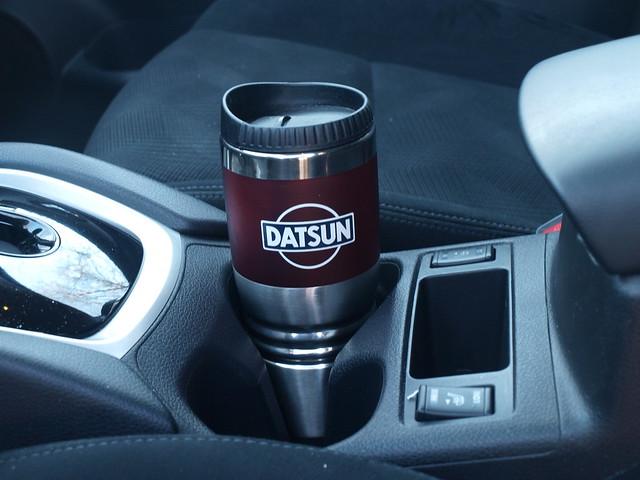 Not quite. As for honoring Katayama-san's passing, I need to recall his work upon his arrival in Los Angeles in 1960 as to where the company is today in the USA. There is one takeaway from this legacy. Most have pointed to his influence on the 240Z and how it changed the fortunes of the company here and worldwide. There is more than just that. If Mr. K did not gamble on the brand on track as early as he did, how would we have received the Z in the first place? By putting Datsuns in motorsport, he created a massive opportunity to not only cement the company’s future – he also solidified the place at the table for the Japanese automotive industry.

That legacy also solidified the Nissan Rogue's place in the market. Nissan gambled on USA production in Tennessee, where most of the Rogues are built today. They have been highly successful in establishing a manufacturing base in this country, as well as breaking all of the norms expected of a Japanese automaker in this country. This would include the last thing Mr. K did not agree with – the moving of Nissan’s North American headquarters to Franklin, Tennessee – from the place he built as a beacon for the company decades ago. With all due respect to Katayama-san, this is the reality of a maturing company – the same one in which he helped grow at its most critical time. It is also the same one that became an influential company in my automotive realm – starting as a child with a 240Z and a 510 dancing in my head at age 6.

Katayama-san's coda resonates to all of us: "Love Cars! Love People! Love Life!"

That alone is the true legacy of Mr. K.