A Victory & Reseda review of the 2015 Toyota 4Runner TRD Pro

Adulting can be a hard thing to do some days.

Actually, I am fascinated with the word "adulting." The act of being an adult is something expected in society, but it could be a generational shift in terms of our environment, external forces and our upbringing as a child. If we reject adulting, or put the act of doing so on pause, then we have been bombarded with the forces of these obligations and expectations to escape from them.

Consider what we have gone through. Perhaps it is best not to name every event and theme to warrant reminders of our world right now. Yet, it appears a breaking point was reached with us to set it aside. To counterbalance the stresses of the universe, we stop adulting and do something that could be perceived as "childish."

"Childish" might not be a good word. Child-like is perhaps apt. It could manifest in playing video games, eating cereal from our youth, watching cartoons – "South Park" may be too topical, however – or doing something else.

How about driving a vehicle that is meant for play?

Sometimes,"play" means pretending to do something or be someone. I already talked about "creative play," but this is a lighter form of the same thing. Play means letting go of reality and enjoying something that is mindless to perhaps something that requires a different kind of thought altogether.

Somewhere in the middle is a person who wants both aspects of play. Some thought is taken under consideration, but the outcome should be mindless. Or, it could appear to be mindless…

That is all theory. The reality is having something like the 2015 Toyota 4Runner TRD Pro at your disposal.

Toyota’s 4Runner is a truck-based SUV made specifically for people looking for adventure. That was how it was first conceived in 1984. Toyota took their HiLux pickup (we Americans simply called it the Pickup back then), integrated the body with the cab, chopped everything back of the windshield, welded a roll bar and provided a fiberglass top that could be removed. It was quite popular with those looking for such a vehicle, but abhorred Jeeps, Broncos and Blazers. Heck, it was a Toyota! It was reliable, trustworthy and it sported a darn good four-wheel drive system with roots dating back to the first Land Cruisers.

Several generations later, the 4Runner is still based on a global truck platform with a few changes. The body is much more integrated, available only in a four-door SUV format with a liftgate. The body-on-frame integration is more pronounced, creating a solid structure for optimal rigidity. The result is a SUV with an honest four-wheel drive system that is capable of getting over canyon floors, hiking down tough trails to the cabin and doing both competently in comfort.

The TRD Pro package adds a lot more to this picture. With a solid platform to work with, Toyota Racing Development took what they learned from off-road competition – namely the Baja 500 and 1000 desert races – and applied it to the 4Runner, along with the 2015 Tacoma and Tundra pickups. They focused mainly on the suspension, which includes oversized Bilstein high-performance shocks with rear remote reservoirs and a set of TRD-tuned springs. The front area gets a quarter-inch thick aluminum skid plate to protect the engine, front axle, transmission, and transfer case from rough debris below. The final touch is a set of 17-inch matte black aluminum wheels shod with Nitto Terra Grappler tires. 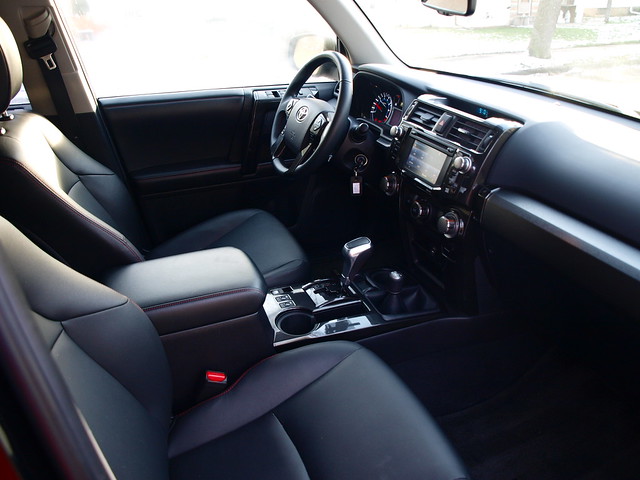 Toyota did not stop with the suspension and the wheels. Step inside the 4Runner and you will find red stitching on the SofTex seats. The shifter gets a special handle made for action. However, the big difference is seen right behind the shifter. Usually, a knob controls the transfer case. Not in the TRD Pro! That is an actual, real transfer case lever. It is in a J-patter, starting with 2-H, shifting down to 4-H, then a swing to the right and up to N, with the grand finale a 4-L at the top of the J.

So, this is a serious off-road machine. It is designed for more than just desert running and rock stomping. At least that is how I approached the 4Runner TRD Pro.

At least, I can speak further on the four-wheel drive system. Not only does the TRD Pro sport a real transfer case lever, the system is augmented by some electronic aids to make sure that the off-road experience is worry-free. One needs to look up at the switches and knobs above the rearview mirror to see how. The two knobs control crawl control and terrain management, while there is a differential lock and the automatic traction control feature enabling maximum control at each corner when needed. 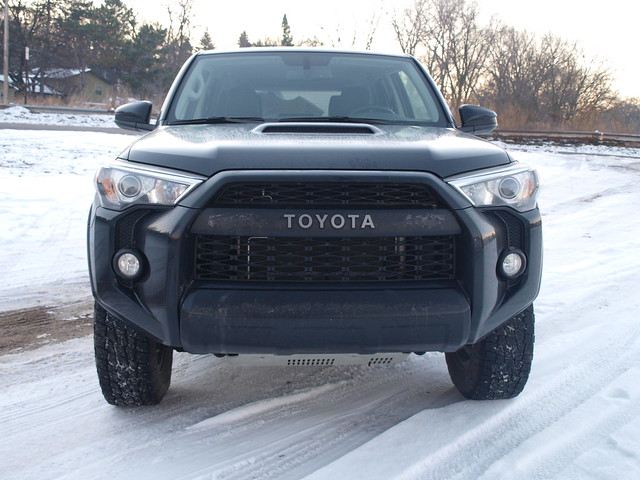 The idea of adulting does not come to mind, even with some serious suspension and four-wheel drive components. If you look at this black-on-black-on-black-on-black version, you cannot ignore some fun details. The specific front end for the TRD Pro would remind someone of Darth Vader's helmet. Believe me when I had Eddie Izzard's routine of Darth Vader in the Death Star canteen proclaiming he can "kill you with a thought" or "death by tray." Does it help that it also has a raised hood scoop for that added Darth Vader effect?

Then, there's the vehicle itself. It looks like a toy. If you think of it that way, then you might want to add off-road driving skill to this 1:1 scale Tonka toy with a real live 270-horsepower 4.0 liter V6 engine fueled by petroleum liquid. This is the kind of "play" that separates the adults from irresponsible people. The kind of adult that would want to enjoy the 4Runner TRD Pro is one that loves to play…seriously. Rather, an adult that loves serious play.

This goes back to the intended purpose of the 4Runner TRD Pro. I did consider the fact that Minnesota does not have any deserts or considerable mountains and canyons to work with. Northern Minnesota was a possibility, though time and planning were not on my side. The 4Runner did show up in December, where it is expected to either be cold or laced with inches of snow on the ground. Neither of those scenarios happened here at V&R Headquarters in the heart of the Twin Cities.

Instead, I did find some snow, ice and…later on…mud to test out the TRD Pro's traction system. It worked quite well. The Nitto tires can get through any surface, though some may dismiss them for not being a true winter off-road tire. The suspension kept everything in an even keel, though expect some frontal dive upon hard braking. Normal braking does not induce adverse suspension response. Putting the transfer case at 4-H is the key to get through these varying surfaces, including articulating through ice bogs. 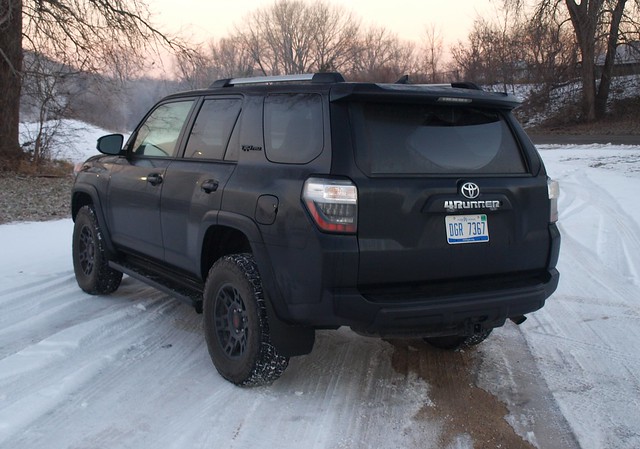 Do you really want to know what kind of fuel economy the 4Runner TRD Pro got? Does it really matter? Well, if you must, it averaged 16.2 MPG. At this point, if there is more than enough fuel to get to where you need to go, you're good. Believe me, that is a real measuring stick for 4Runner TRD Pro owners to use.

At what cost would one pay for this off-roader? The sticker that came with this all-black 2015 Toyota 4Runner TRD Pro had a grand total price of $42,540. If you seek a 2016 version of the same model, the black paint scheme is not available. It now comes in gray, white and tan. Tan sounds interesting…for about $90 less. There might be a black one left at a Toyota dealer or on a pre-owned lot somewhere.

Some hard facts need to be considered. Although 4Runner sales are up over last year – 27.1 percent so far – it ranks third in brand SUV sales volume behind the RAV4 and Highlander. On the flip side, Jeep sells more Wranglers than 4Runners overall. In total, the 4Runner and Wrangler amount to 25,000 units per month – just short of the average monthly sales rate for the RAV4. 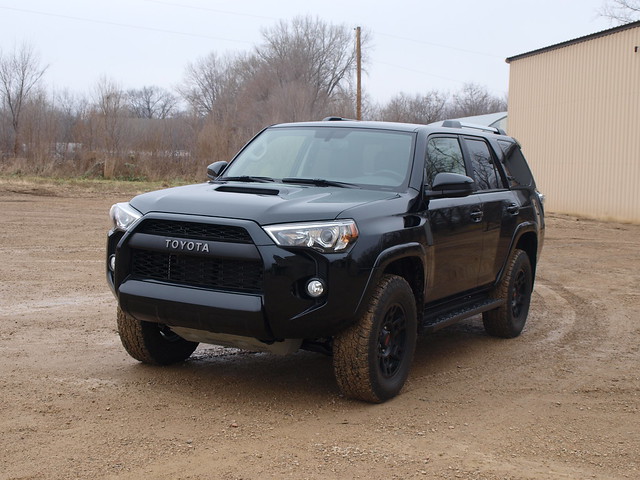 In a world full of crossovers, you would think people might just look at an honest-to-God SUV with real off-road capability than something that is a bit larger than a station wagon – and drives like one. That is exactly the point about the Toyota 4Runner TRD Pro.

It is absurd to think that one could be a responsible adult and drive a 4Runner TRD Pro. This is true when life is dictated by a normal commute, parking at their normal place of work, grabbing dinner from the drive thru and settling into a nice evening at home with whomever said person calls a family. No, this vehicle will evoke your childhood – especially one full of Tonka toys, dug up dirt parts of backyards and an imagination that calls for something outdoorsy and untamed.

In this particular case, adulting is overrated.