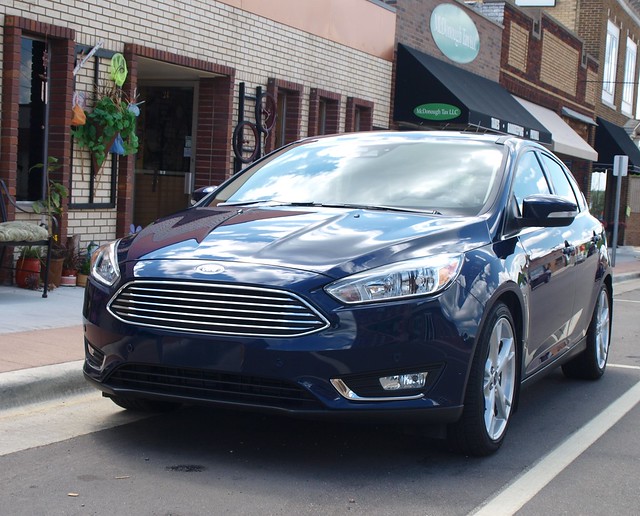 A Victory & Reseda review of the 2016 Ford Focus

Back in 2000, I got to drive the then-new Ford Focus. It was a complete revelation on how a compact car can be not only fun-to-drive, but accommodating for many bodies. The SE sedan I drove felt great in and around the Washington, DC area. The European design was mostly carried over, except for under the hood. Yet, I did not mind. It was a different car for Ford, which became its most mainstream model over the years.

Sixteen years later, I entertained another Focus. It is basically the same idea – a European-designed car that fares well for the North American market, a practical machine that embodies plenty of performance while sipping fuel along the way, and a stylish number that stands out among the rest of the class.

I know, "cool story, bro." I suppose I should be talking about the ST or the brand new RS. That is what you want to read, right?

The hot hatch versions of the Focus are what you want to know more about. I get it – the ST has become an alternative to the Volkswagen GTI and can be found at track days and autocrosses. The RS is the big dog. It has caught the attention of Mitsubishi Lancer Evolution, Subaru WRX STI and Volkswagen Golf R owners and enthusiasts.

This review is not about the ST and the RS. Nor is it about what everyone else buys. The average Focus customer buys an SE sedan or hatchback with at least one package upgrade and a few other options. That’s it. This is not based on retail customers, but also of fleet customers, too.

Your typical rental car is probably a Focus SE with a basic infotainment system, backed with SYNC, and a few options. At some places, you do not have other choice. Then again, they are equipped a little better than the average Toyota Corolla, Hyundai Elantra and Mazda3 that are rented alongside the Focus.

What was presented for review is a 2016 Ford Focus Titanium. Not the most average model, nor the sportiest. It is however a great showcase of what Ford has been up to for their global compact car. 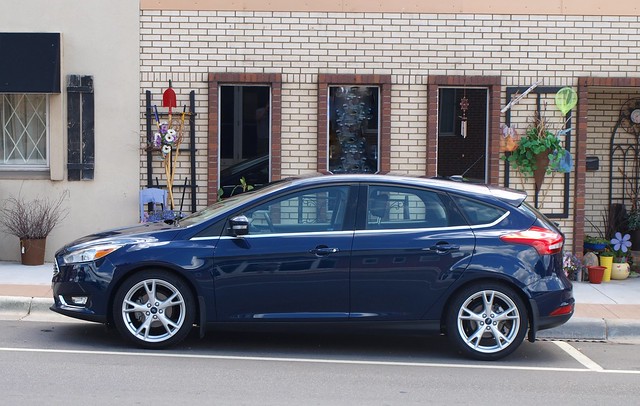 "Luxury" compact variants used to be one that lure customers to showrooms. Since the proliferation of car culture, it is the sporty models that do the trick. But, not everyone has a sporty model, so luxury trims often feature the latest and greatest technology – safety and infotainment, to be exact. They also show the possibilities a customer could aspire for when they choose a particular model.

In the case of Ford, Focus customers are offered plenty of choice – in contrast to its competitors. When you reach the Titanium trim, you get plenty of upgrades that make the Focus stand out a bit more than the rest. Which is really redundant, because the Focus itself stands out on its own.

The mid-cycle refresh from 2015 addressed a few things with the Focus. The front end is not in line with global design tenets, including the "Aston Martin" inspired grille (remember when Ford actually owned the British sports car and grand tourer producer?). On the Titanium, there is a bit more chrome to distinguish it from the popular SE – on the grille, the side window surrounds and in the rear. The headlamp units offer LED daytime lighting, though it switches to the main beams at night. Fog lamps are integrated into the lower fascia. The rear taillights appear to be smaller – an update to Ford's overall global look. That alone presents a cleaner look out back, even for the hatchback model I am testing. The sedan features new lenses for the taillights – again presenting a cleaner appearance overall.

Let me go on the limb here…I like the look of the mid-cycle refreshed Focuses than I do the earlier models.

With that said, I found one interesting detail on this particular tester. The 18-inch alloy wheels on this model could seem a bit out of place. However, they are shod with Pirelli P Zero Nero tires, which are pretty decent rubber. It might be a luxury level compact hatchback, but I think what it wants to be is a hot hatch at heart. 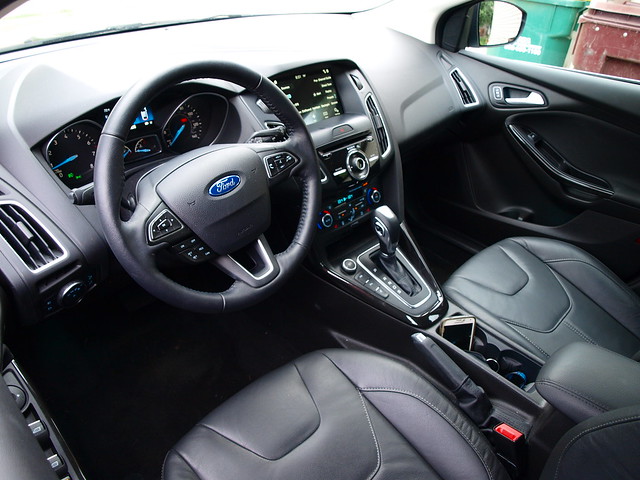 Then, you step inside the cabin. The leather trimmed seating is a dead giveaway for its true intentions. The seats are supportive with the right about of bolstering and the hide used is good to the touch. However, it took a while for me – a big person – to get comfortable. Being tall, I finally settled into a comfortable position behind the wheel – the seat was pushed back and lowered for the right leg to work between the pedals. Rear seat room is also tight for us tall folks. The Focus is really built for "average" sized people, really.

Also, the sightlines for the instrument binnacle is are on the low side…unless you are shorter than me. I also found the main dials lit a bit dimly, even at night. They were at maximum illumination, however. The information screen was very informative, however. I found the switches right to Ford standards – logical, good to the touch – except for a few key switches well below my reach by the headlight knob.

The big star of the Focus cabin was SYNC3. Not only is the touch screen perfectly positioned for quick view and reach of touch, but it is highly functional. The interface is cleaner and easier to read – from the home page of three quadrants to each page beyond. Bluetooth connectivity is improved, but it could be a bit faster overall. Sony provided balanced sound with its 10-speaker system, including a cargo hold mounted subwoofer. The available navigation system was also on board this tester.

The specification sheet states that the hatchback is to hold 23.5 cubic feet of stuff. However, if you set up the cargo cover properly, it creates a secure cocoon to protect your stuff from prying eyes. However, if you need more space, the rear seats fold down to expand cargo space to 43.9 cubic feet. 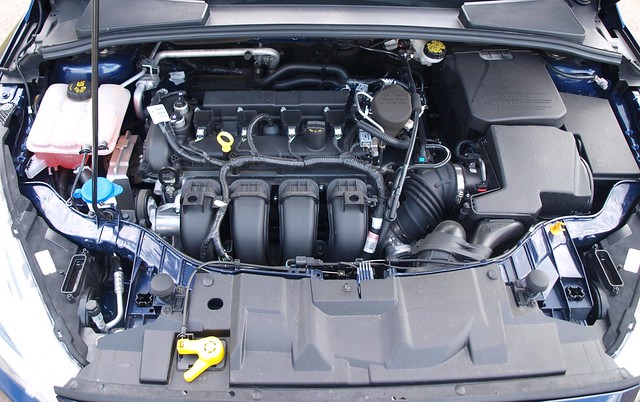 Under the hood is a strong 2.0 liter four-cylinder that you could fuel with either unleaded regular or E85 Ethanol. There is plenty of performance from its 160 horsepower and 146 pound-feet of torque. A six-speed automatic transmission connected this engine to the front wheels. I averaged 29.4 MPG using both regular gasoline and E85. The gas tank is small, with just 12.8 gallons at ready. Overall, this driveline adds to the superb driving manners of the Focus making this great for the road.

The Focus drives superbly with a smooth ride and good handling. It takes any road surface in stride. There is minimal lean in the curves, thanks to a superb suspension set-up. Steering response and feel are superb, with solid on-enter feel. Turns are on the average side, even with the steering wheel at lock. Braking is simply solid to the touch, with great pedal response and good normal and panic stops.

The Focus Titanium tester did come with some active safety features. These features include blind spot monitoring, rearview camera with cross-traffic alert, Lane-Keeping Assist and Active-park assist. The latter works to make sure you can parallel park with confidence.

For 16 years, the Ford Focus showed us that a global strategy can work in this country. It remains a popular choice for compact car buyers, now that the latest sales figures show an increase in segment sales across all brands. Some might say that the Focus is an acquired taste. I disagree. If you are familiar recent Ford products, you will like its intention on being different from the rest, while maintaining a solid level of value, equipment and choice in its class. 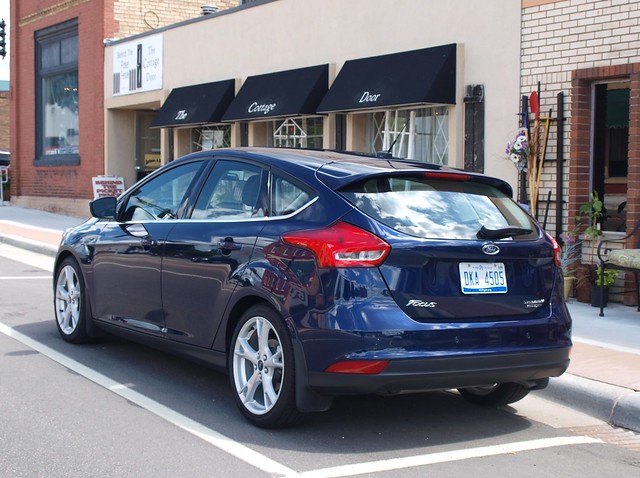 With the RS being the new halo for the lineup, the Ford Focus becomes more desirable. Maybe more than ever. Yet, while the very limited availability of the RS lures in the hardened enthusiasts, the average buyer wants good transportation and a great vehicle to drive. There is absolutely nothing wrong in choosing the Focus over the rest of the class.