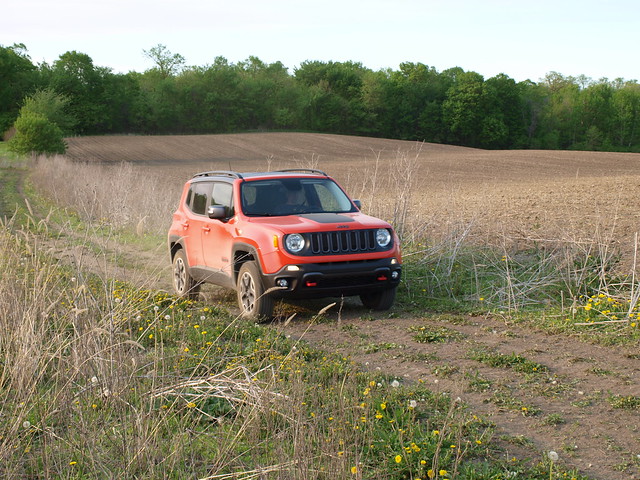 2016 Jeep Renegade Trailhawk on the move. Photo by Tyler Trabant

A Victory & Reseda review of the 2016 Jeep Renegade Trailhawk

A true test of a Jeep – any Jeep – is its ability to be driven off road.

Seventy-five years ago, when the first Willys-Overland and Ford produced vehicles took their place among the rank and file of the United States Armed Forces, the most important requirement for these small, nimble vehicles were to be able to get through tough terrain to get the job done. In combat, "Jeeps" worked recon duty, transporting officers to the line, taking the wounded back to medical units and arriving after liberating a town from the enemy. Since then, the expectation of each Jeep is to perform duties that were above and beyond any normal vehicle.

Because of this expectation by its owners and enthusiasts – among whom are the most loyal and dedicated group of any brand or manufacturer – Jeep had to step up its game at every turn. As long as the Wrangler is still the most capable vehicle on the planet, Jeep can do everything to it to meet its customer's requirements. Owners of other models expect a high level of ability and capability from their Jeeps equally than their hardcore brethren.

For these enthusiasts, the introduction of the Renegade was received with mixed emotions. Sure, it looks like a Jeep, but it's smaller than any Jeep made in decades. It does not look that cap[able and really do not deserve the Trail Rated badge. It is a front-wheel drive derived, just like all of its competitors. And, the most vehement dismissal of them all – it's built in Italy by Fiat.

These were what some of the critics have said – including hardened enthusiasts. They want nothing to do with the Jeep Renegade. They want Fiat Chrysler Automobiles to build more Wranglers and Grand Cherokees and call it a day.

But, that's not how today's automotive market works. Consumers want affordable, efficient crossovers and SUVs. FCA have been banking on these models as their savior while other brands are experiencing a slow down in sales. Yet, they have not been well received by the enthusiasts. The Compass was too much of a softroader for their tastes. The Patriot looked capable, but earlier models with the CVT put a damper on their reputation. The newest Cherokee simply looked too odd to be a Jeep. Yet, all three have been doing quite well sales-wise, along with the rest of the Jeep brand. 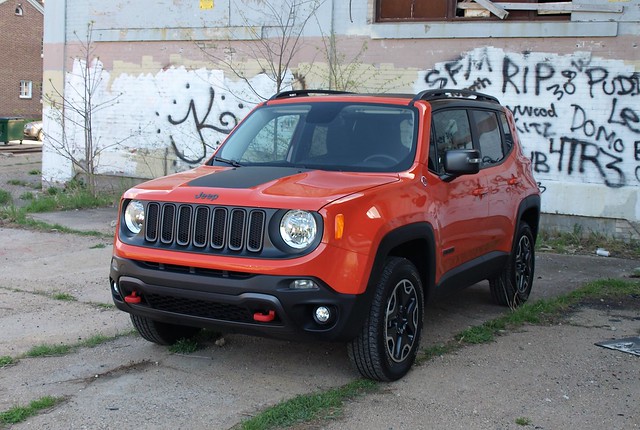 Then, the Renegade arrived. It represented a new class of vehicle that was primed for growth for both urban dwellers and adventure seekers looking for a utility-type vehicle that is small, efficient and fun. Yet, it was built in Italy – no one ever thought a Jeep is worthy of its seven-slot grille and its badge by being built at a Fiat plant. Fears of poor quality and reliability seeped into the conscious of potential customers.

In the midst of the naysaying, a point has been missed by most everyone. Fiat has had experience in building off-road capable four-wheel drive small vehicles since the 1980s. The idea came from the Panda 4X4, a reputable friend of the farmer across Europe. Just like the early Subarus, the Fiat Panda 4X4 were cultivated in rural areas to prove its reputation as a hard-working vehicle that can get through anything in its wake.

Because of the Panda 4X4, Jeep and Fiat were set to create a global version of this vehicle. This is not just for American audiences, but for global ones, too. Hence why the Renegade was developed into a Jeep that is small…and, yes, mighty.

All fears set aside, it is a hot seller. Even without this information about its inspiration, customers looking for a small and mighty Jeep got one…and were quite happy.

Even in its own class, the Jeep Renegade is a standout product. It has one major advantage over them all – an available Active Drive Low system, with two four-wheel drive ratios and a 20:1 crawl ratio, combined with Select-Terrain and Hill Descent Control. What other subcompact crossover/SUV has those features?

In order to get this four-wheel drive system, you have to choose the Renegade Trailhawk model. I believe I recommended this in last year's review of the Renegade. In fact, I contend that this is the Renegade to get. 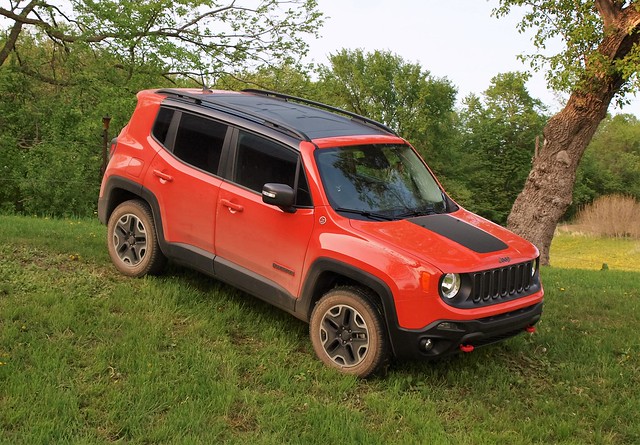 Why? Renegade Trailhawk customers simply want to have fun, right? The point of having one is to use it whenever you can – on- and off-road. The on-road part is easy. It is softly sprung, just like a proper off-roader, with the right amount of appearance goodies and a rugged interior. One cannot mistake the three red tow hooks (two up front and one in the rear) and the front end that is angled for steeper approach. The all-black interior features red accents and Trailhawk stitching on the front seatbacks.

The real test of the Trailhawk is to find out whether it is worthy of the Trail Rated badge on the side of the A-Pillar. Does this specification work for those who wish to follow that lifted Wrangler onto some hardcore terrain?

You can put it on rocks and the system will work. However, my testing was based on more real world applications – sort of. In this part of the country – Minnesota and Western Wisconsin – real technical off-roading opportunities are not readily available. That is, unless, you want to drain the tank a couple of times going back-and-forth to locations where you might end up with the local authorities arresting you for trespassing on property that you should not be on.

Instead, I did two phases of testing. One, was to follow some rural gravel roads for miles on end to check stability and strength. The second was to take the Renegade onto a friend's farm with a greenlane (a UK term for traversing properties on an old trail made for animals) and a fun track made for ATVs and dirt bikes. Without going into a play-by-play of each testing phase, one conclusion has been made regarding the Renegade Trailhawk – it is a whole heck of a lot of fun!

What makes it fun is the four-wheel drive system's high level of competency and a soft suspension setting. The way it goes through tough terrain is amazing. You are not taking the offset of the terrain in the cabin. As the Jeep took on various rural terrain, the Active Drive Low system was locked to ensure maximum traction and stability. The result was phenomenal – definitely confirming the Renegade Trailhawk's capability as advertised. 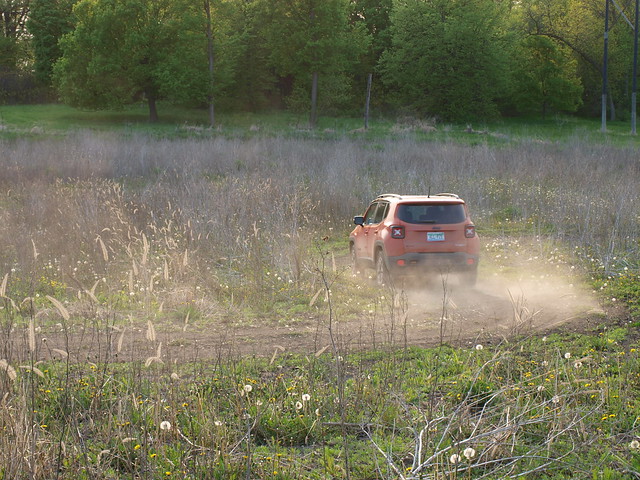 One thing I wanted to do was to use the Hill Descent Control. Unfortunately, there not a long enough drop to test it out. I will say that parking on a steep hill was not a problem for the Renegade.

For this kind of off-road fun, Jeep attempted to make it available at an affordable price point. The base price for a Renegade Trailhawk is $26,745 – which is really a good starting point for a solid off-road capable vehicle. The sticker price on our Omaha Orange tester with several options came to $30,950.

While you can get a Wrangler Sport with almost the same amount of equipment for less than $1,000 more, you might want to consider a few things before jumping to one over the Renegade. For starters, fuel economy – I averaged 23.0 MPG in the Renegade Trailhawk while I have never achieved anything above 19 MPG in any Wrangler I reviewed. That is just for starters…we can go on for hours talking about the differences between these two vehicles.

The bottom line on the Renegade Trailhawk is that it can do most of the job a Wrangler does, but it does so with a competent four-wheel drive system with important enhancements to ensure proper traction and stability of the vehicle. It is worthy of its Trail Rated badge, but one should be careful to remember that it is not as highly capable as a Wrangler when it comes to very technical off-road maneuvers. It will ride on trails, go greenlaning, ford up to 19 inches of water and can tackle some rocks along the way.

While I respect the Wrangler and its iconic status in the Jeep lineup, perhaps those who might not want something along those lines. Why not the Renegade Trailhawk? Exactly!