A Victory & Reseda Preview of the 2016 Lexus RX

The Lexus RX pioneered the conveyance known as the luxury crossover. It has done so by providing its "fanatical" and loyal customers the space, comfort, performance, efficiency and capability they wanted in this type of vehicle. Most likely, an RX owner will trade in for a new one – one of the highest levels of vehicle loyalty in its class.

This year alone, Lexus owns the segment with a 15% share of it. If you own the market, you need to maintain that leadership no matter what comes your way.

This is the story of the 2016 Lexus RX. This fourth-generation vehicle has the monumental task to retain its segment leadership, its loyal, "fanatical" customer base and to be a step ahead of everyone else.

It is easier said than done – the whole business of maintaining your leadership above all comers. Lexus recognized it had to do more to gain not just loyal customers, but to attract potential conquest buyers. The brand's spokespeople stated that their focus groups showed the potential of conquests as more male customers were actually interested in the 2016 model than of previous generations of RXs. Lexus also knew that they would have to make this new RX for the next generation of luxury car buyers – Generations X and Y.

Like I said: better said than done. But, did Lexus do it with the new RX?

A trip to Raleigh-Durham, North Carolina was in order to see whether Lexus was on point with their top selling vehicle in the lineup. After an overnight fill of the "Lexus Life," I was given the opportunity to explore parts of the Triangle area – a locale that I have not visited since 1998 – with this important new product. 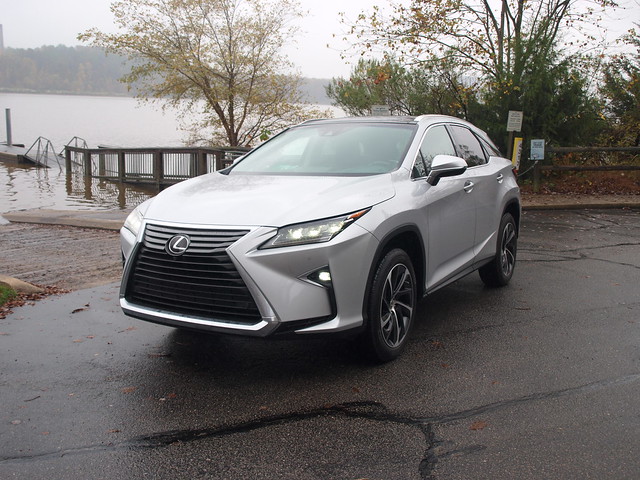 Let me start with this statement: The 2016 Lexus RX is the right vehicle to explore any area in. It just seem that Lexus got the RX right for not only loyal customers, but for potential conquests. The feel is much better than before – I have driven two examples of the previous generation model which I had prior notes to compare with. The improvements in driving dynamics were indeed marked with a tighter body and suspension set-up. In the two examples I drove – a RX 350 FWD with the Luxury trim and a RX 350 F Sport AWD – I noticed that roll and lean have been minimalized, the ride smoother and more silence inside the cabin. Steering response has also improved. The wheel is much better to control than before, leading to a good feel and turning radius.

Another set of improvements for both RX 350 models were found under the hood. Power is up on the 3.5 liter V6 – now at 295 horsepower. Combine that with a wider availability of an eight-speed automatic transmission, and you have a driveline that is more responsive and smoother than before. I found this to be true with the lack of gear transition feedback and a much quicker response from the accelerator. In the F Sport, the Sport S+ setting has improved with better steering feedback and a firmer ride/handling set-up. I will admit that I enjoyed the pronounced roar from the exhaust at full throttle. It turns down when it settled into cruising speed.

I am not saying that the RX would be great on track, but when you need to get into another lane or to simply get where you need to go, the 2016 RX does a fine job in setting the pace out on the road.

There are two bits of information you may need to know about driving the 2016 RX. The RX still weighs north of 4,000 pounds – 4,222 pounds on the front-drive model. It does not feel like that you are driving with that much weight, thanks to the increase in horsepower, the additional two gears in the transmission and tighter build and construction. The other thing is fuel usage, which has been an issue when owning a premium vehicle. The big attraction to the Lexus RX is the use of regular gasoline, instead of a higher octane fuel. That remains with the new model – and that's a good thing for those looking to save a few pennies at the pump. 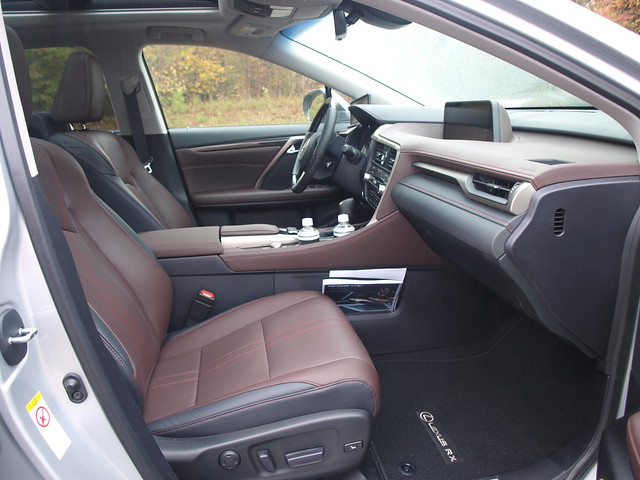 While its driviving dynamics has shown signs of improvement, the cabin is going to win you over. Gone are a lot of the elements that sustained the RX for three generations, such as the triangular center control stack, the steep transmission lever position and a few other details. The new cabin is much more straightforward, with the center console redesigned with the gear lever, the Drive Mode selector and climate controls are at the right place to my hand. Instrumentation has improved with a new TFT screen, now aligned with current Lexus standards. Other controls, including the new steering wheel, feel superior and are in the right places for fingers and hands to get to.

In terms of infotainment, the RX offers two flat TFT screens positioned perfectly to the sight lines on top of the instrument panel. Higher trim models and the F Sport offer a much larger 12.3-inch screen that is easy to read. However, there were a few problems. First, the mapping software needs a generational update for better deciphering of roads that actually exist. Secondly, it still uses the Remote Touch mouse controller – although it has improved from prior RX models. I suppose that my love for the touch pad system in the NX and RC models may not be requited for the loyalists that love the Remote Touch in the RX. Then, there's the lack of compatibility with Apple CarPlay and Android Auto. Lexus offers a series of apps for your smart phone that connects compatible apps to run onto the infotainment system.

If there is a positive, the Mark Levinson system is a pretty damn good audio system. Heck, the standard audio setup is pretty good, too. As someone who needs his music all of the time, Lexus is a great place to enjoy each track in relative luxury.

Speaking of luxury, you will enjoy the seats in the 2016 RX. Between the Luxury trim and the F Sport, everything is astoundingly great. The seats offer improved bolstering and support. The F Sport seats have deeper bolstering, though they are a bit firmer than before. In all, the seats were great for even the long haul deep into the countryside outside of Apex. Space is great – both front and back. Cargo space is also fantastic with 18.5 cubic feet to play with under the cargo cover. The trimmings used on the Luxury package are what I will call bespoke with gray Sapele wood combined with aluminum inlays. Perforated aluminum trim finishes off the F Sport’s look inside.

In all, you cannot go wrong with the RX interior. It could be the best cabin atmosphere in its class. I thoroughly enjoyed my time inside of these two RXs. 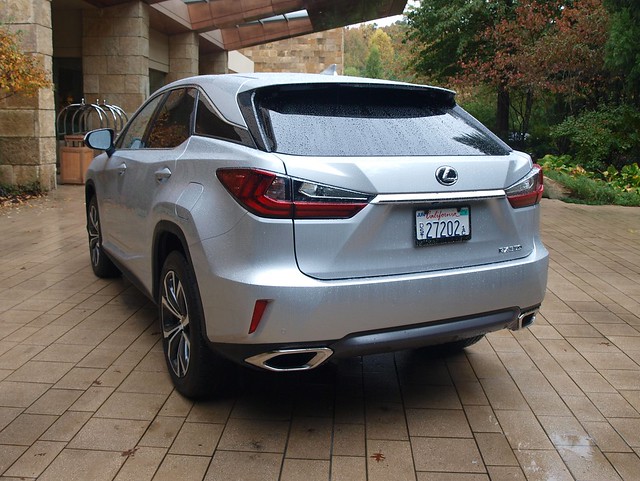 Stepping outside of the 2016 RX provided the biggest debate about the vehicle itself – the exterior. Opinion is split across social media about the look of the 2016 Lexus RX. Whether it was the second-generation Spindle grille, the headlamp units, or the overall front clip, it seemed to be a love/hate proposition for people. I get it – we're visual people. We may not get the chance to drive one, but we mostly judge any vehicle by the way it looks. If you walk in my shoes, then you will understand that exterior design is only a part of the complete package on any vehicle.

Yet, one part of the RX's look may be something I have been struggling with days after I drove the vehicle. The C-pillar's design would be best described as polarizing. The severe top chrome line creates an interest effect that either compliments or detracts from the overall exterior look. How it was angled may coincide with the RX's "seductive strength" look, but the drawback of the "glass" pane was very limited rear quarter outward vision. Then again, the last RX had a similar problem with rear quarter vision.

Aside from the C-pillar, I have no problem with the RX's exterior design. Remember, this is coming from the guy who's favorite car in the world is the Lexus RC F.

The 2016 Lexus RX will start with a base price of $41,900 for a front-wheel drive model. Along with the RX 350, the RX 450h returns with its hybrid-gasoline V6 driveline, now up to 308 total system horsepower, a choice of front- or all-weather drive and the newly added choice of a F Sport model. If you could imagine putting a RX 450h F Sport in Sport S+, you certainly can. Believe me, the feedback is really good about that particular model. 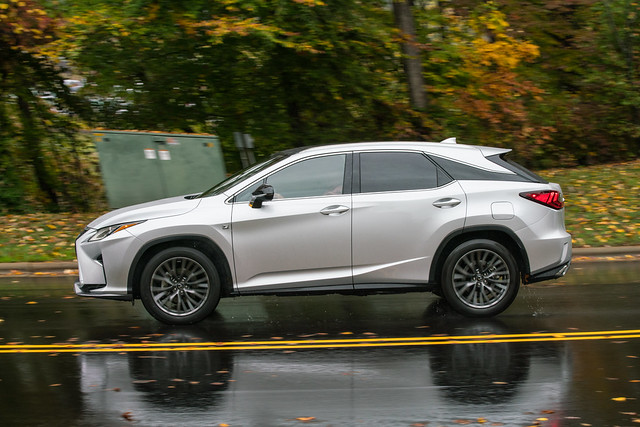 In a class where the extraordinary is expected, there is no question that the "seductive strength" of the 2016 Lexus RX lineup will keep it on the forefront of its class. It will keep the loyalists happy and "fanatical," while enticing potential conquest customers with its angular charm and wide model range. The RX should be at your local Lexus dealer as soon as you read this preview.

I am simply glad to see the improvements on the 2016 Lexus RX. They are right for the "Lexus Life," which is a wonderful life to enjoy.