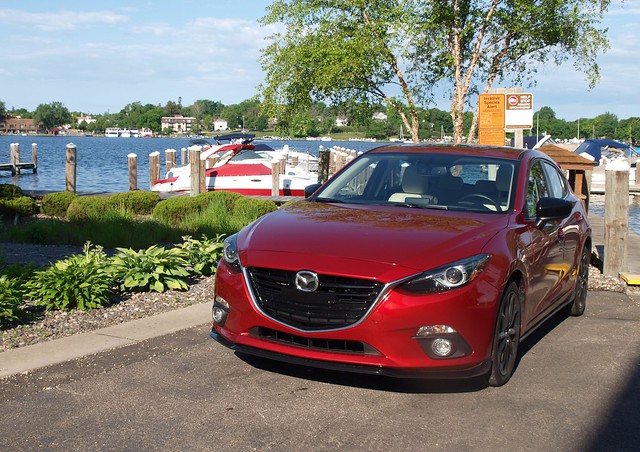 Has it been two years ago already?

Social media is a wonderful thing, sometimes. This Wednesday morning, Facebook decided to pop up a memory from two years ago that I did an extended drive in a 2014 Mazda3 to test out fuel economy and driving dynamics. After my time in the Grand Touring hatchback with its 2.5 Liter Skyactiv engine, 6-speed automatic transmission and tech goodies, I summarized my experience in this car as follows:

"Damn good," I said. Good to be the best compact car in this market, I said.

Sales-wise, it is doing OK. It leads all Mazda models in sales volume, averaging 10,000 units a month in the USA. Granted, it is just a fraction of the sales volume its more prominent rivals – the Toyota Corolla and Honda Civic, to name a couple. Even as crossovers/SUVs still hold true to families and people with active lifestyles, the Mazda3 still signify its position as the enthusiast’s choice in the segment. Yet, non-enthusiasts are enjoying its economical side, as well as its practicality and versatility.

I could declare all of this as the end of the story. But, it is not. Since the debut of the Mazda3, several new compact car models arrived in their respective showroom to battle with the Zoom-Zoomer. A recent drive in the all-new Honda Civic revealed a huge improvement in this car, thanks to an efficient, but powerful 1.5 Liter turbocharged engine and a compelling design inside and out. The Hyundai Elantra underwent some improvements, including a new smaller turbocharged engine and the inclusion of a suite of active safety features normally seen on larger models. Even the Scion iM gave us a view of how a Toyota Corolla should be.

While the Honda Civic retains its lead in the class through its design, engineering and execution, where does that leave the Mazda3?

To find out, a Soul Red 2016 Mazda3 S Grand Touring hatchback arrived for me to do my usual evaluation. I felt it was time to revisit the “enthusiast’s choice” to see whether it retains this title. 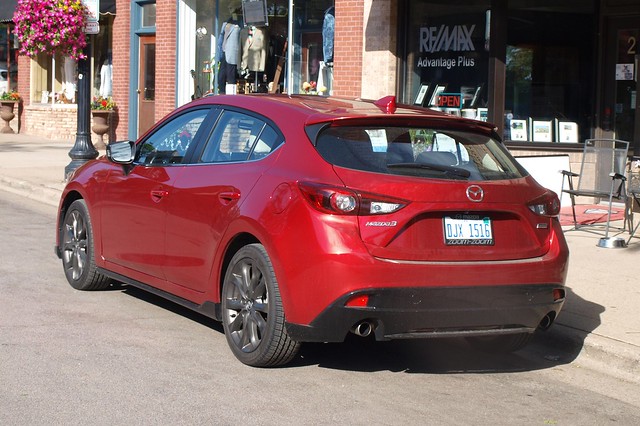 Upon receipt of the vehicle, I noticed something different about it. If you look around the bottom of the car, there are some black aerodynamic aids attached to it. Out back, a diffuser with a huge hole in the middle drew my attention. The side mirrors are adorned in matching black finish and the usual 18-inch wheels have a deep graphite gray finish. Obviously, I did not notice the rear spoiler on top of the hatchback. I figured it was part of the vehicle as it was.

All of this was offered in what is called an "Appearance Package." For $1,750, you can have Mazda present you with a car that looks like it might have at least a Stage 1 tune underneath the hood. As I know my readers, they want "moar low," Stage 2 tunes, Hankook Ventus tires and a muffler delete. With the Mazda3, I want to appeal to you that not everyone wants all of that.

The customer I am thinking of is someone who is not an enthusiast, but appreciate an automobile for what it is. Yet, they also like the creativity the tuners and hardcore enthusiasts do to their rides. Sure, it is stock, but that may be an advantage to those who might not know about this car.

In my eyes, ordering the Appearance Package does give it a mild "tuner" look. Does it add or detract from the rest of the Mazda3? The added factory "mods" are distracting – in a good way. They look subtle, but not in the gloss black finish the lower parts are. The wheels are also an added visual bonus. Come to think of it, it appears that Mazda created a Club version of the 3. For those of you unfamiliar with Mazda’s products, the Club is a special MX-5 Miata that offers black trimming and wheels. 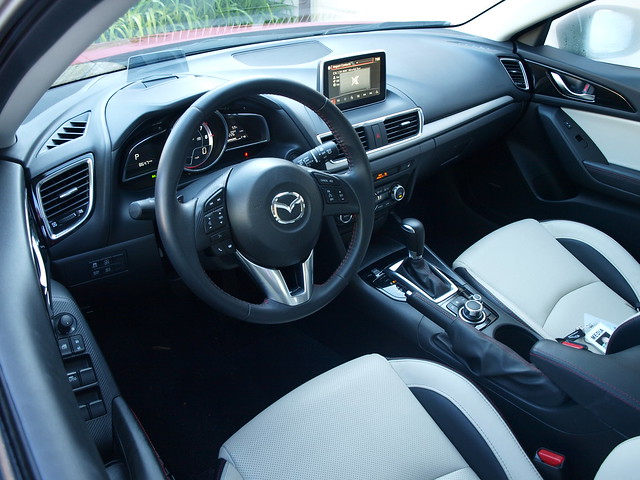 The dead giveaway for it not being a Mazda3 Club is its interior. Mazda offers a luxurious interior palette called Almond. This leather upholstery is a mix of a cream colored hide with black accents and carpeting. Certainly, a black interior would be appropriate for an enthusiast's ride. However, the Almond interior adds some class to a sporting machine. Some may argue that it is a bit too luxurious for this car. We could argue on this point for days…

Everything else inside is simply just fine – as I remember it from two years ago. The touchscreen is also controlled by a knob on the console with associated buttons. Bose Centerpoint speakers fill the cabin with wonderful sound. Seats are supportive up front with some room in the back. If you're tall and relegated to the back – watch your heads! Cargo space is expandable with an easy load-in and out. And, can we change out those LCD readouts on the instrument cluster to TFT screens, please? That's my only request, Mazda…really…

The one thing that enthusiasts love about the Mazda3 is it availability of a larger engine underneath the hood. The 2.5 Liter Skyactiv engine is well suited for this car, with 184 horsepower and 185 pound-feet of torque available up front. The six-speed automatic works quite well with it. You can get a six-speed manual for the Grand Touring model with the bigger Skyactiv engine. Things get a bit exciting when Sport mode is engaged, with high rev points, quicker shifts and heavier steering feel. Flipping the paddles adds more control to the transmission with desired responses. If you have not worked these paddles before, understand how a manual behaves first, before start flipping them for the hell of it. 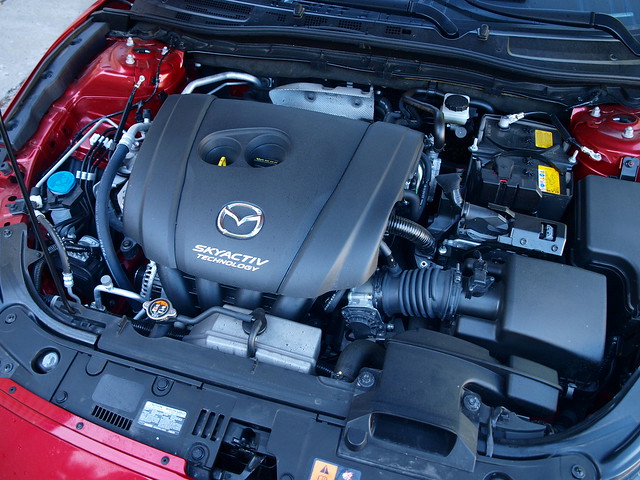 The one thing Mazda does best is in the way they engineer their cars for a more dynamic behavior. The 3 does not disappoint, with nominal roll, great cornering ability and a balanced ride. Brakes are good with strong vacuum power to the discs. They yielded solid stops in normal and panic situations. Steering is good overall. It is even better in Sport mode. The one thing I would be concerned about is the long nose and judging distance to turn…or stop. You get used to it after a while.

If you are considering a Mazda3, you may be surprised by how much you can get one for. A 2.0 Liter Sport sedan starts with a base price of $17,845. Hatchbacks start at $18,545. However, this top-of-the-line Grand Touring hatchback with the 2.5 Liter Skyactiv and the Appearance Package came with a sticker price of $30,270. Somewhere in-between is a Mazda3 that you can afford that can supply all of the enthusiast joy that you require.

It brings up the answer to this car's summation of whether it is the best in class. It still is – for the enthusiast. That is if you only consider the larger 2.5 Liter Skyactiv engine above the basic 2.0 Liter version. This is not to say there is something wrong with the smaller engine – quite the contrary! Yet, the Mazda3's competitors are lining up to grab the non-enthusiast consumer. I think it would be a shame if they did not consider the less expensive and powerful versions of this car in comparison to its rivals. 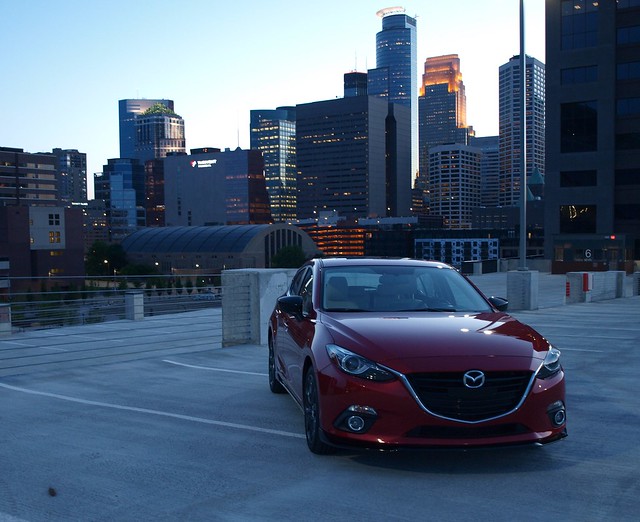 In all, the Mazda3 is still a damn good car – no matter which version you choose. It still is a strong competitor in its class, even as its rivals upgrade and improve. For enthusiasts, it remains the absolute choice.