We automotive media professionals hate being asked one thing: "What's your favorite car?"

It is a trite question. It puts us on guard to try not to offend someone in the room – an enthusiast or an employee of a manufacturer. Because we like a certain car challenges our perceived loyalty – if one exists – and integrity of the work we do.

I know I am supposed to one of these professionals. I try to maintain decorum and keep all frustrations to a dull roar. Yet, given the right situation, I would enjoy the moment and thrive in it. It simply comes down to the passion for the work – and how it manifests in your life. It has to satisfy and makes one happy…

Back that question, if I say what my favorites were, would that challenge my integrity?

Though I have an occasional topic on here called "My Favorites," I would have to take an even bolder statement to bend those rules a bit further.

Here is that bold statement: The current Mazda6 is one of my favorite cars.

The Skyactiv Mazda6 is one of those cars that remind you of the need to have people in it, but it acts unlike a mainstream mid-sized sedan. It drives much better than those selling tens of thousands of units per month. It feels good through the curves and lets you relax on the highway at a good clip. Better still, it gets exceptional fuel economy. The two previous Mazda6s I had in for review averaged 31.8MPG. I am not making this up! 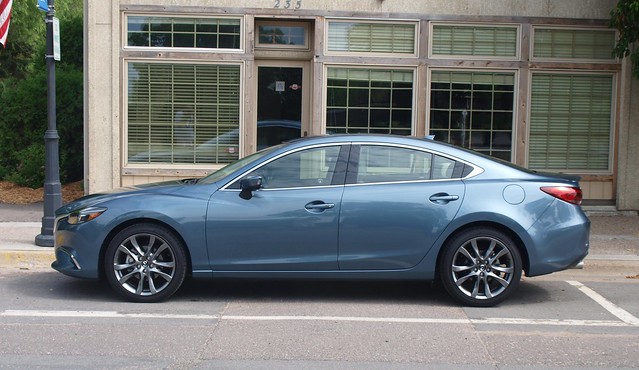 Yet, there were some drawbacks. The interior was good, for the most part. That was until you stared at the infotainment system. The old system lagged in Bluetooth connectivity and was simply out of place. The knob on the console controlling the system helped, but it needed a better set of choices and graphics. I could go on about the interior, then I would get into an obnoxious round of nit picking that would be refuted by someone who absolutely loves this car.

Word on the street has it that Mazda fixed a lot of my complaints. In other words, they made the 6 better.

The 2016 Mazda6 arrived home. I looked at it and smiled further. It looked cleaner up front with its new grille. The Blue Reflex paint job just looked stunning. There is a graphite-colored, satin-looking finish to the big 19-inch alloy wheels that simply stand out in this model. I always thought the Mazda6 had a presence that was undeniable, but these updates certainly added to the presence laid down by the KODO – Soul of Motion design language.

The powertrain had not changed – and that is a good thing. The Skyactiv-G 2.5liter four-cylinder offers up 184 horsepower and 185 pound-feet of torque that motivates a 3,250-pound mid-sized sedan. Add the six-speed Skyactiv automatic transmission, and it is all good. Smooth shifts and good transitions on passing maneuvers help make life easier when battling traffic in the Twin Cities…or, for leisurely drive in the country with a few of your friends.

Perhaps the best thing Mazda has ever done to its lineup is to offer the Parchment leather interior. I had experienced this in a few Mazdas over the past few years and it is, well, bespoke. I know, this color of hide is usually reserved for the likes of Mercedes-Benz, Bentley, Rolls-Royce and so forth. A couple of people remarked how it was quite luxurious for a car of its kind. Maybe it is not the hide itself, but rather the execution of it inside the 6. 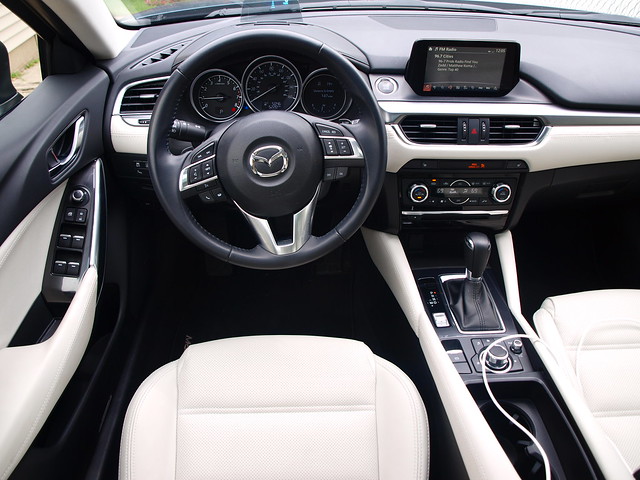 The biggest news for the 2016 Mazda6 remains inside with an all-new center console and infotainment system. An electronic parking brake, a new gear selector and the controller for the infotainment system anchors a redesigned center console. There is more logic and less clutter than before. The best part of the new infotainment screen, similar to the Mazda3. It is not just the new graphics and ease of operation, but the improvement in Bluetooth paring and interfacing with mobile apps, such as Pandora. The improvements were right on target in fine tuning this car.

This Grand Touring model included the Technology Package. If you care about safety and want a better way to get through the day, tick this option on your order sheet. With Radar Cruise Control, Smart City Brake Support with Collision Warning, a Distance Recognition Support System, Lane Departure Warning, Rear Cross Traffic Alert, Blind Spot Monitoring…and so forth…there is an absolute sense of security that is slowly making its way to this class of car. However, I applaud Mazda for its execution in making sure they work. And, yes, they do work.

Also included in the Technology Package is the i-ELOOP regenerative braking system. This enables energy recaptured from the brakes to power a second battery for essential electrical power to the climate control, the infotainment system and so forth. Very clever, indeed! Then again, I have said the same for the past two Skyactiv-generation Mazda6s I have driven.

If you read my previous write-ups on this car, you know that everything continues to be true. Fuel economy is down to 28.5MPG, but it remains better than most of the vehicles I have driven since the first time I took the current generation Mazda6 for an extended spin. It just drives extremely well.

Obviously, price has gone up since the 2014 model showed up for its full evaluation. A 2016 Mazda6 Sport with a manual transmission has a base price of $21,495. This Blue Reflex Grand Touring tester came with a sticker of $33,395. 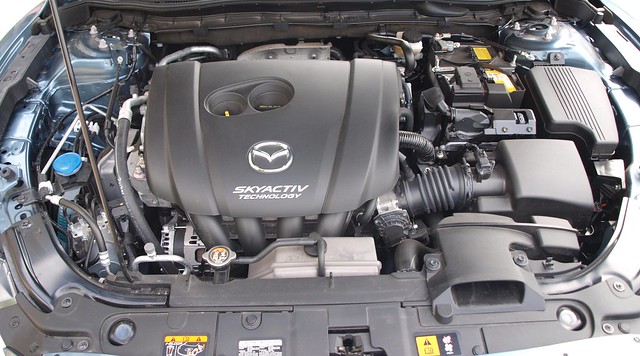 It is safe to say that the Skyactiv-generation Mazda6 remains the only car under $35,000 that I welcome home every time it wants to. But, is that a definitive statement?

We should consider that statement carefully. The price threshold of $35,000 sounds a bit much for a car. However, the market has changed with the rise of car prices. Not to mention, the rise in the cost of adding active safety features, advanced infotainment systems and other technology additions to meet today’s standards. The price itself signifies the line in the sand between something ordinary and something very special.

It seems unfair to categorize that price threshold that way. It is true. If one wanted a mid-sized sedan or a compact crossover/SUV, the average retail sticker for a "well equipped" model would be around $30,000. These two segments represent the heart of automobile market. Yes, pickup trucks sell well in this country, but their average sticker price for a "well-equipped" model is well over the $35,000 threshold.

But, does price matter? If you are on a budget, it does tremendously. It would dictate whether to buy new or used and how much car, truck or crossover/SUV you can get for the money. In this case, let us stick with new. The Mazda6 is a value proposition that combines the space of mid-sized car in a sexy skin and can offer a sporting drive with advanced safety technology. Fair enough, but does it meet the initial statement?

If I wanted other people to ride with me, there may be some hesitance due to its sloping roofline. In fact, the Mazda6 can accommodate four six-foot stick-built men in comfort. If headroom is an issue, there are other cars to explore – the Toyota Camry, Honda Accord, Volkswagen Passat, Nissan Altima and Hyundai Sonata. But, if you want to stick with Mazda, there is the CX-5 crossover. That, too, has been revised for 2016. It offers great headroom, the same engine and transmission, improvements in the infotainment system and that parchment leather upholstery in the Grand Touring model. 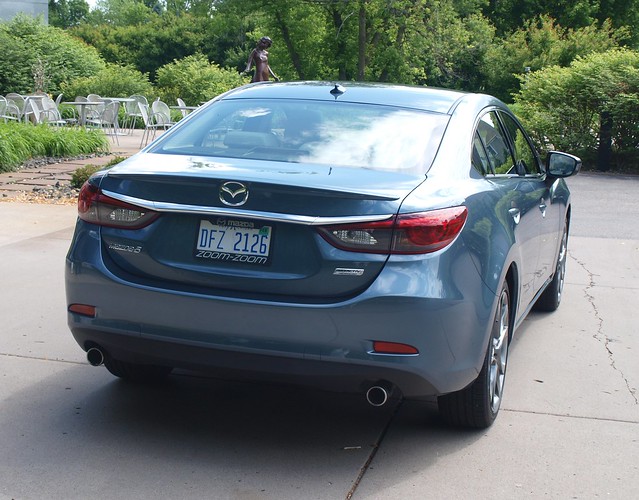 Yet, there is that one quality the other vehicles listed in the last paragraph does not have that Mazda6 exhibits very nicely. When you drive the Mazda6, you feel how it drives. The way it handles and the excellent ride quality is what makes the Mazda6 the more desirable car in is class. There is nothing loose about the Mazda6. It just feels like it wants to carve up a curvy road. That is a quality I like in a car.

So, if it is such a good car, why aren't people buying it?

Let me point out a couple of things. The Mazda6 is not for everyone, but it really should be. It boggles my mind when I see the monthly sales figures and look at the numbers of the 6 against the leaders in its class. How does one sell tens of thousands of units each month of a vehicle that lacks the soul and athleticism of the Mazda? Then again, I would be easily accused as being solely an enthusiast verses someone that truly understands the so-called market.

It is also missing something – the Skyactiv-D engine. If Mazda has been racing this engine in America, why can it be offered in the production model here? Why is there the hesitancy in doing so? My take is simple: A diesel makes more sense in terms of driving engagement while achieving higher fuel efficiency than a Hybrid – end of argument.

It is a long-winded way to answer my own question. To conclude, the Mazda6 is a fine car that still has a place in this work. It is a family sedan that satisfies the enthusiast. We really need more enthusiasts to step up, especially when you can get one for under $35,000 with everything!

I hope this answers your question…