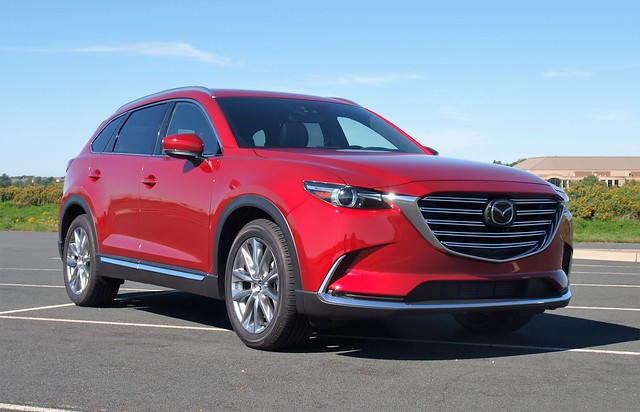 Mazda has been one of those brands that make this job a bit easier to work with.

In my case, it is based on familiarity. I mentioned the fact that I owned a 1979 Mazda 626 coupe, which was originally my brother's. If you ask him about that Mazda, you will get a different picture than my experience. Granted, it was not perfect, but it was fun. At that time, I was all about fun…and going to work…and trying to make a living…and so forth.

For as long as I have been writing about the automobile, I loved working with Mazda and its products. They have evolved into fulfilling its promise of "Zoom-Zoom," though some may argue otherwise. Heaps of praise has been put upon the CX-5, which is a crossover/SUV for enthusiasts or those who like driving engagement. The Mazda3 has been named "best in class" and enthusiasts enjoy the Mazda6 over other models, even as not a lot of people of buying them.

Then, there was the CX-9. It was a byproduct of Ford’s ownership of Mazda. Some have argued that the CX-9 was not "Mazda enough" to be Zoom-Zoom…these days, the advertising slogan is "Driving Matters"…even with three rows. I mentioned the fact that it has garnered its share of accolades above all comers in the three-row mid-sized SUV segment. I thought it was "more than competent," despite its size, heft and its huge thirst for gasoline.

With every challenge comes an opportunity. Part of that opportunity is a change in strategy for Mazda. It has always been seen as a sporty brand with sportier vehicles, without the sports car price. Yet, Mazda needs to distinguish itself to maintain its relationships with its most loyal customers and enthusiasts. Mazda decided it will be an aspirational brand – going a bit upscale to attract enthusiasts wanting something a bit more special. It means adding more exciting features, such as the new G-Vectoring Control that enhances vehicle dynamics overall.

This push upmarket starts with the newest edition of the CX-9. This new generation model is thoroughly transformed three-row SUV with everything Skyactiv – the name used for Mazda's push towards lightweight, stronger, more efficient vehicles – and KODO – the design language that has framed Mazda’s look for the past few years. It promises to be the "driver's SUV" – with three rows of seating available. 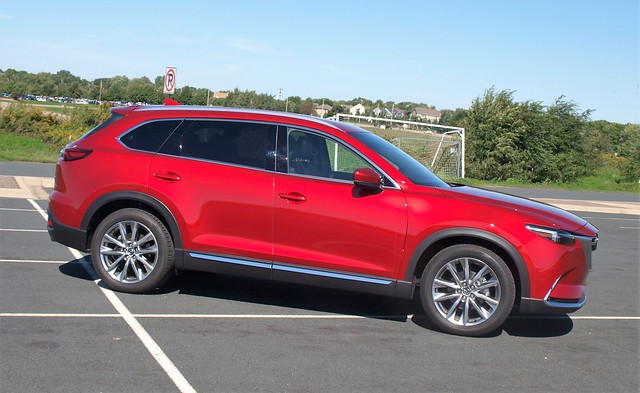 I like a good challenge. I prefer taking up an opportunity instead. Therefore, I challenge this CX-9 to show me what opportunity Mazda has for its push upmarket, as well as creating a better three-row SUV.

Perhaps that was too easy to send out a challenge, because the CX-9 delivered what could be the best design package in its class. This is the best expression of what Mazda intended through its KODO – Soul of Motion design language. The top edge of the grille form just out more than the rest of the front clip, with an enlarged, chrome encased grille flanked by small headlamps units. The lower fascia is integrated well with this front clip creating a bold statement to anyone seeing it in their rearview mirror.

While the front end starts the conversation, the rest of the body continues it. It seems smaller than the previous generation CX-9, but with taller doors and a lower ground height than before. The rear end is very compelling with slim tail lamp units and a high belt line that frames the two halves of the tailgate perfectly. Most vehicles in its class usually do one design element well and forget about the rest. Not Mazda. They created a handsome and compelling looking mid-sized three-row SUV that is aspirational and very handsome.

This Grand Touring AWD model wore big 20-inch wheels with Falken Ziex all-season tires – the first time I have seen Falken used as OEM rubber. The chrome overall was tastefully done, giving the impression of upward mobility in a vehicle that is aimed at the heart of the mid-sized three-row market. Mazda may have something that could do battle with the likes of the Ford Explorer, Toyota Highlander and Hyundai Santa Fe (three-row model, that is), while staring down the barrel of premium products, such as the Audi Q7 and Mercedes-Benz GLE. 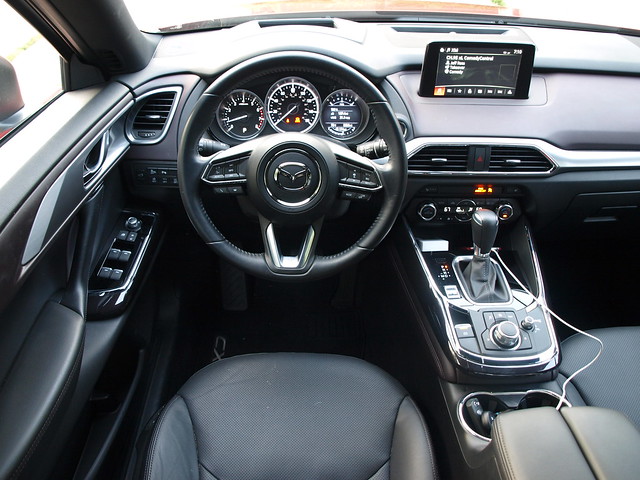 With the Grand Touring, you get perforated leather seats, wrapped in some large chairs up front and two more rows of seating behind them. Due to a wider center console, there is a feeling that the front seats are closer to it, rather than balanced between it and the door. The chairs are very supportive with excellent power adjustments for rake, height, recline and lumbar. The second row seats are adjustable for rake and recline, as well. It also has a single lever control to flip and move forward the second rows for third-row access. It also helps to have extra wide doors that open to almost 90 degrees for better overall third row access.

Second row room is fantastic for adults my seize to sit behind me…and I am a larger-than-average-sized person. Third row seating is best for children not needing additional safety equipment. Child seats are best left for the second row, for parental access of course! The third row can also be folded flat for a great load area. In total, cargo space behind the second row is 38.2 cubic feet. If you have all three rows up, the CX-9 only gives you 14.4 cubic feet of cargo space – most of its competitors have the beat by mass quantities. For larger items, the CX-9 can give up to 71.2 cubic feet of space to take it all home in…with only the front seats available.

New for Mazda is a color TFT screen in the right dial of the instrument cluster. This is something I have been waiting for…and it looks great! It shows plenty of information for trip, fuel consumption and vehicle functions. This screen should appear on other Mazda models within the next model year and so. Otherwise, the large three-dial instrument cluster is indeed a nod to the idea of Driving Matters with its sporty intentions on display. The steering wheel offers better, more tactile switches for audio, cruise control and the information screen. Mazda's recent tablet-like infotainment screen sits on top of the center of the instrument panel, with the control knob and separate volume control on the console. Additional audio and climate controls anchor the wide center console with the shifter and other pertinent controls at the driver's reach.

Mazda Connect works quite well. Bluetooth is great for phone calls and music playback. The USB connection can be fed back from the center console through the opening in-between the armrest/compartment access. Bose offers 12 speakers of superb sound throughout the CX-9's vast cabin.

Unlike the current Mazda lineup, the CX-9 offerings do not stop with the Grand Touring. Mazda's upmarket aspirations are summed up in a new Signature trim level. The Nappa leather seating, woodgrain trim and additional LED lighting heightens the Mazda CX-9 to new heights. 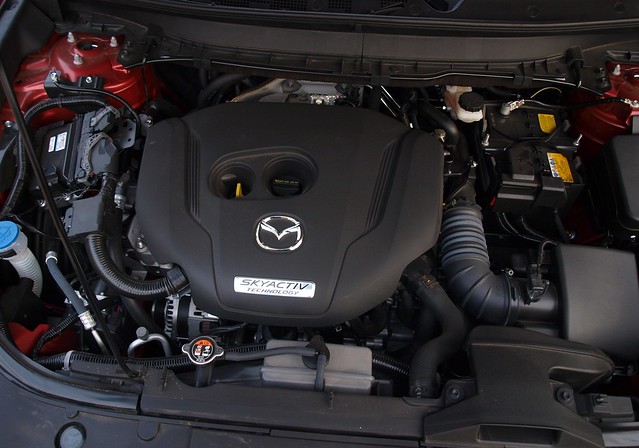 While most of its competitors are settling with V6 power, Mazda dropped their Skyactiv 2.5 liter four-cylinder engine underneath the CX-9s hood. This is not exactly the same engine found in many of Mazda’s products – namely the Mazda3, the Mazda6 and CX-5. They added a turbocharger to it. The result is a horsepower rating that actually depends on which fuel you put in the tank. If you elect to go with just Regular fuel, you are limited to just 227 horsepower. Fuel up with the 93 octane Premium stuff, and that horsepower rating goes up to 250. For octane ratings in-between, your actual horsepower will vary depending on the fuel grade being pumped in. No matter which fuel you use, the torque number is the same at 310 pound-feet.

Sending power to Mazda's all-wheel drive system is the Skyactiv six-speed automatic transmission. This is a smooth shifting transmission, facilitating a very smooth and powerful engine. Turbo lag is undetectable with a quick throttle response. Of any vehicle in its class, I love how it responds to the accelerator and keeps the momentum up nicely. Consider this in the context of a 4,301 pound vehicle, with a towing capacity of 3,500 pounds. In terms of fuel economy, I averaged 21.6 MPG – quite the jump from the last generation model reviewed here.

You will appreciate the ride quality in the new CX-9. It is smooth for the family and for the driver up front. The suspension absorbs the cracks and bumps very well. Cornering is on the soft side, so expect some roll and lean, if pushed past the limit. Steering is quite good with excellent feel on-center with a good turning radius and great response from the wheel. Expect a bit of numbness, which is expected in today’s SUVs. Brakes are among the best in class, with great stopping power and response in normal and panic situations.

The CX-9 was designed for active safety integration. This includes features such as Smart Brake Support and Smart City Brake Support, both using the sensor behind the Mazda badge to ensure that the vehicle is stopped when an obstruction is in the way. By obstruction, I mean the vehicle in front of you. The CX-9 Grand Touring also offers as standard other active safety features, such as Lane Departure Warning, lane Keep Assist, Rear Backup Sensors, Rear Cross-Traffic Alert, Blind Spot Monitoring, and Mazda Radar Cruise Control. 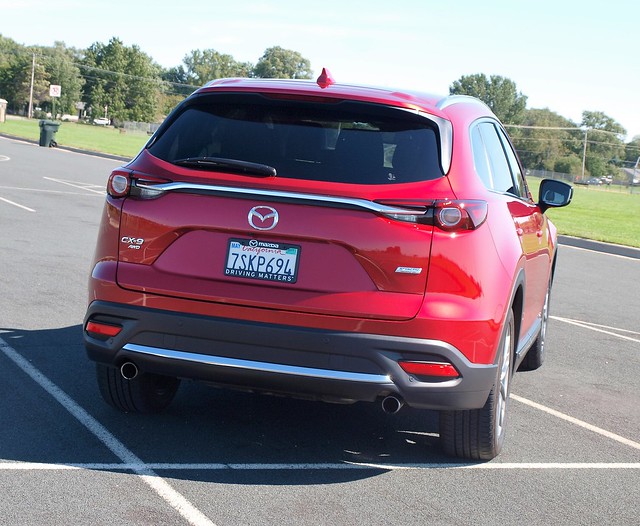 Obviously, I have been talking about the CX-9 Grand Touring so much, that I failed to even mention that there is a choice of trim levels for this great new three-row SUV. The Sport model is well-equipped for middle-of-the road customers. Pricing starts at $31,520 for the front-drive model. Adding all-wheel drive bumps the base price up to $33,320. The Grand Touring is not the top of the line, however, my example came with a sticker price of $43,170. This reflects a vehicle with high standard equipment levels and only an upcharge for Mazda's signature Soul Red paint. If you must ask, the top shelf Signature model has a base price of $44,015.

Yet, we should discuss how well the CX-9 did for its complete transformation into its Skyactiv/KODO/Driving Matters form. This is indeed the best three-row mid-sized SUV in its class. It is not about what it has to offer or how it looks. Rather, it is about execution. Mazda executed a vehicle that has upmarket aspirations, while maintaining a strong value for everyday consumers. In relative terms, people looking for something more special out of their family hauler may want to consider the CX-9 Signature as a well-equipped and fantastic place to drive around in.

For Mazda, the CX-9 is the entry to the next level in the marketplace. Even with the Grand Touring, you can tell how much Mazda wants to compete with the likes of Volvo, Acura and Buick – at least. If there is confirmation that Mazda is on the right track, talk to the friend of mine who mistook the CX-9 for an Audi. He also happens to be a board member of a car club here in the Twin Cities. In a short moment, his spouse corrected him by saying that it is indeed a Mazda.

Surprised? Nope. I'm just glad someone else found the CX-9 to be on the right course towards Mazda's upmarket intentions.