A Victory & Reseda preview of the 2016 Scion iA and iM

This could be a classic two-fer…

What do I mean by a "two-fer?" Scion came up with an idea to promote their two upcoming products – the 2016 iA sedan and the 2016 iM hatchback – together. There are various reasons why, outside of the single release date to dealerships on September 1.

In essence, they are two different vehicles. Yet, they serve as an important part to bring customers to the Scion side of the showroom. While the tC and FR-S serve as keeping enthusiasts interested, Scion had to do something to replace the three models they no longer sell – the iQ minicar, the xD compact hatch and the xB wagon/crossover. The iA and iM fit to add context and contrast to the lineup attracting urban dwellers and fun seekers, respectively, by bringing cars that are fun to drive and accommodating for everyone.

Though Scion wants us to see the iA and iM as joined at the hip marketing-wise, I must reiterate that they are two different cars with different missions. Their audiences may be the same age groups, but they are looking at these two cars from different lenses.

A consumer must make a choice between one and the other. This was the approach I took with the iA and iM. It is not just which one I would prefer over the other, but which one would satisfy you. Let me guide you through these two cars.

First, the iA subcompact represents a first for Scion – a three-box sedan. It is also the first Scion to be built in the NAFTA zone at a shared facility in Mexico with Mazda. It is no secret that the iA is indeed a Mazda built for Toyota's youth-minded, easy-to-purchase brand. Yet, it could be the best subcompact in the marketplace for under $17,000.

How did Toyota and Mazda hook up to create a Scion that would surprise buyers looking for basic transportation? The emphasis on the word "premium" comes into play when step inside. While it is clearly, a Mazda-designed cabin, with some Mazda components throughout the cabin, there are some touches that make it a Scion. The seat upholstery is clearly an input from Scion. The graphics on the speedometer and the blue color touches are also from Scion. It is perhaps the best interior that Scion has ever offered with better quality in some places, though some cheapness in a few spots.

Trust when I say this: The exterior will grow on you. If you simply overlook the front end and its big mouth, the rest of it is quite handsome – in a very Mazda way. The alloys are fine and fit the mission of the iA. This subcompact sedan is both polarizing and nice looking – something that is truly missing in that class.

The iA comes with a choice of a six-speed manual or automatic. Both transmissions feed into a 106-horsepower 1.5 liter four-cylinder engine. Understanding that performance will be on the light side, the manual makes the most of what it has to work with. Shifts come from a short and snappy gear lever, yet the higher ratios reveal tall gearing. This is necessary given the fuel consumption figures the iA wants to meet. In our drive of the manual iA, observed fuel economy averages were up in the 38-39 MPG range. The automatic is not exactly fun to drive from first gear, however. Tall gearing was found in higher gears, but getting there seemed like a bit of a struggle. 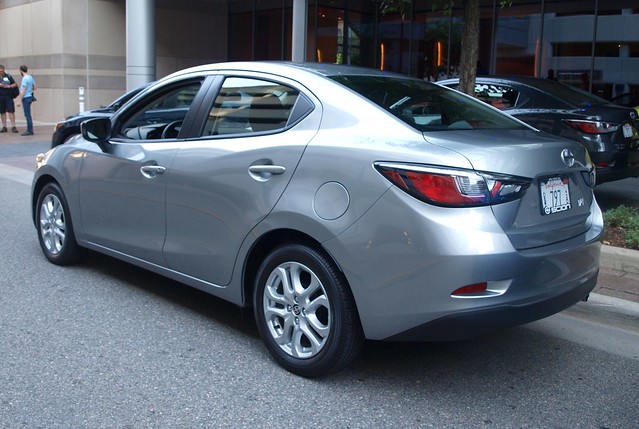 Where the iA will surprise some consumers is in the way it goes about the business of driving dynamics. The ride is smooth and compliant and handling is perhaps the best of any in is class, save for performance versions of its competitors. Steering is very good with solid weight at the wheel. There is also solid braking power in the iA, even with drums in the rear.

The best part of the iA proposition is its price. As a comprehensively equipped "monospec" model, the subcompact Scion sedan has a base price of $15,700 with the manual. If you really want the automatic, that will cost you $16,800. The price also includes a low-speed pre-collision safety system – something not found at this low of a price point.

As much as I appreciate the iA and see that it should be a leader in its class, the one model I prefer over it is the iM. This is the car I was waiting for. This Japanese-built hatchback is based off of a Corolla variant sold in most places around the globe as the Auris or Levin. The global design was retained, with is semi-upright hatchback look, providing a nice hatch opening with solid load access. The front end was tweaked for Scion, which I happen to like. It offers personality, something to expect from Scion. The doors open well, though front doors are larger and open much wider than the rears.

If you have been in the latest Corolla, then the cabin should be a bit familiar to you. However, a few more tweaks were made, such as a few details on the instrument binnacle and a clean piano black finish around Scion's Pioneer touch screen audio unit. The seats offer better bolstering and comfort than the Corolla S, which makes a good countryside run much nicer to deal with. There is plenty of headroom in the rear seat of the iM, though leg room is fine for average-sized adults. The cargo hold is well shaped with 20.8 cubic feet of space behind the rear seat. 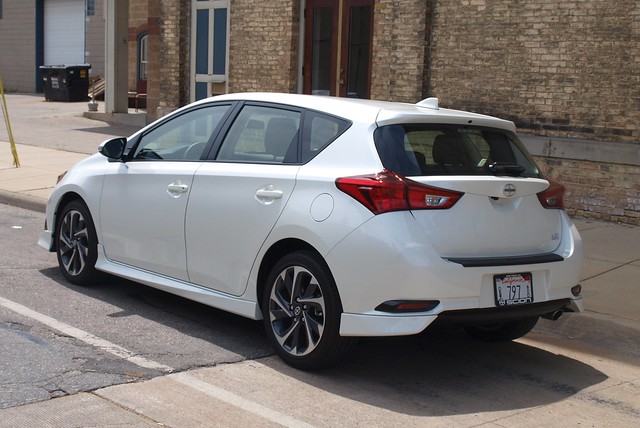 Like the iA, the iM offers you a choice of transmissions. This time, it is a six-speed manual and a continuously variable transmission for the iM. The engine is a more flexible version of Toyota's Valvematic 1.8 liter four-cylinder normally found under the hood of the Corolla LE Eco. For the iM, it is tuned for 137 horsepower. With the CVT, you do get that initial whine up to higher revs before kicking down to the next ratio before settling into a smooth run. Keep in mind, the CVT is not designed for a hot foot, but rather one needing to go simply go somewhere on time. Once it gets going, the iM is a pretty good cruiser with a penchant for wanting to have some fun.

In terms of economy, I observed a range of 32-37 MPG in the iM. This is a good fuel consumption range to get in a compact hatch that wants to have fun while being efficient.

The iM really sings on the road with a great ride/handling mix. It helps to have MacPherson struts up front and a double-wishbone set-up in the rear. Handling and tracking is superb and the iM never felt taxed in the curves. Cornering is near flat, which one could thank the addition of 225/45R17 tires on all fours. The iM gets Toyo rubber on all four corners.

Four disc brakes are also standard, making stopping a bit more manageable. It offers great stops in normal situations. Though steering could be a bit tighter for feel and response. Yet, it is fine in tight maneuvers and when reacting to sudden moves. A smaller diameter steering wheel would be perfect for the iM.

The iM is also affordable with a "monospec" model and a slew of features, compared to comparably equipped competitors. Base price for the manual iM is $18,460. The CVT version starts at $19,200. You can still upgrade to the BeSpoke navigation system, add some Toyota Racing Development modifications, such as lowering springs, a sway bar and an performance air intake, without breaking the bank further. 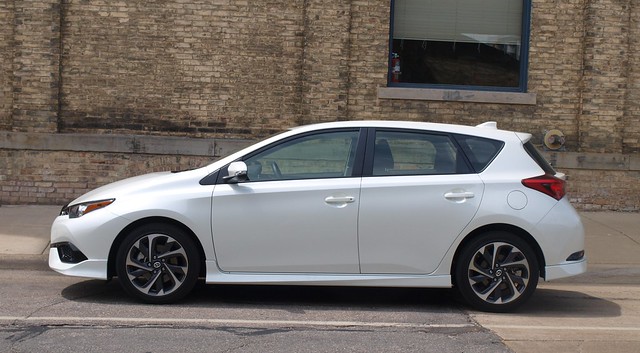 While the iA and iM will be joined to the hip marketing-wise, there are indeed distinctions to be made between the two. The iA is poised to be the best car in its class, but not with the small numbers Scion expects to sell. It is a great starter car for those in college or working their first post-collegiate professional job. The iA really feels at home in urban environments, even alongside the growing number of crossovers that are about the same size. If you get over the front clip, this is truly a nice subcompact sedan to own.

However, the iM will be the darling of enthusiasts…or, those who want to be one. The five-door hatchback and sporty stance is an invitation to simply pack it up and have some fun. Being all inclusive at a price of most base models in its class, the iM is a great value for the money. If people want compact hatchbacks, they should consider the Scion iM as a more affordable way to fulfill that combination of practicality and fun.

If it were my money, it would be the iM. I could see myself having a bit of fun in this thing and doing some enthusiast mods – including the available TRD upgrades from the dealer – to at least play with my friends at their car club, MNScion. Yet, it would be a great practical hatch to facilitate the various interests I enjoy, including travel, music…shall I continue? Plus, the fuel economy is livable – and that is a huge plus in my book!

Come September 1, Scion will reboot itself with two new products – both joined at the hip. Yes, but which side of the hip would you like: A stylish, high value subcompact sedan or a sporty, fun hatchback? Either way, Toyota may have found the formula to continue selling the Scion brand to its value-hungry customers.

Gotta love that kind of "two-fer!"