With the rise of the crossover in this car market, it seems that we forgot all about the sedan.

This is actually not true. A once over of the sales figures for October of 2015 saw several automakers experiencing a rise in sedan sales. Even its leading compact crossovers ended up being outsold by the mid-sized sedan sitting across the lot. Looks like the good ol’ car still has legs against the newfangled crossover.

Understand that not one size fits all. Nor are car budgets the same for everyone. While the attraction to subcompact-sized crossovers is strong in urbanized areas – places where parking is a premium – not everyone has the budget to buy one. Have you seen the prices for these tiny, but mighty machines? Not the base prices, mind you…rather the sticker price after you add several creature comforts to keep up appearances while you take the bus to work and enjoy your renovated fourth floor condominium around the corner from the coffeehouse and the boutique you go to on a regular basis.

Some of us understand the value of an automobile. Yet, some of you know that while we want to pay a reasonable price for a new vehicle, we want one that does not cramp our style. Nor should it be a burden to park on the street or in tight underground garages of even the newest condo towers. We also want a car that will take us to our suburban workplaces, even when transit is not accessible out there. It has to be frugal on gasoline and more than competent to drive when fighting traffic out into the suburbs.

This is the job for a subcompact car.

Enter Scion – Toyota's youth brand in North America. They have been struggling to recapture the energy it had eleven years ago when they debuted with a couple of products that were designed to disturb the small car universe. The xA subcompact hatchback and the "toaster" xB gained favor among the tuner and modified autos crowd, along with Baby Boomers looking for a high value vehicle at a low price. Yet, the Scion team came up with a solution – in fact, two of them.

One of them was a subcompact car – to be specific, a sedan. More specifically, the 2016 Scion iA sedan.

This past summer, I had a chance to sample the 2016 Scion iA at a media drive in Grand Rapids, Michigan. It was only a matter of time to expose this key product for the Scion brand on home turf. Which gives me a chance to answer a slew of questions that I had about the car that I reserved for the opportunity to do a full review of the iA.

Before I dive further into the iA, let me make one thing clear: This is a collaboration between Toyota and Mazda. Mazda built a new plant in Salamanca, Mexico for the purpose of building small vehicles for The Americas. The iA starts off as the Mazda Demio sedan, otherwise known as the Mazda2 in most markets worldwide. The Toyota part of the deal is to add some inputs to the product to be sold through their dealership channels. While USA Toyota dealers get the Scion iA, Canadian, Mexican and Puerto Rican dealers will sell this as a Toyota Yaris. Mazda will not sell the 2 in either the USA or Canada.

Now that we got that out of the way…let's dive into the Scion iA! Thank you for your patience, dear reader… 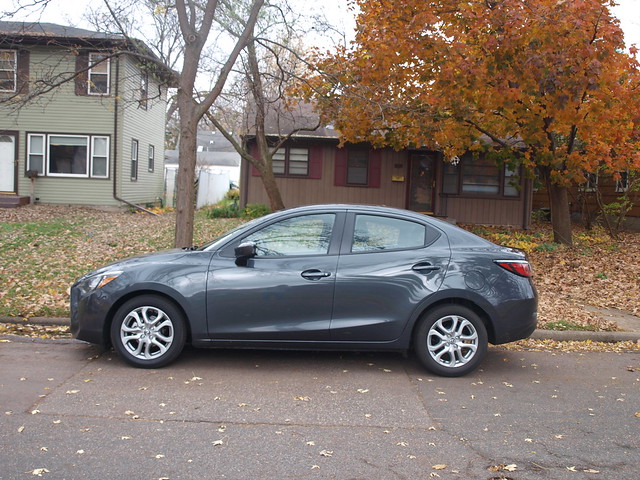 For starters, why are people so polarized about its exterior design? The issue you have is the nose, which appeared to be only one of a few inputs Toyota and Scion had for the car. Granted, it is not exactly a part of Toyota's design language, which makes this quite polarizing. However, it makes it an easy-to-spot piece of the car as you try to find your car along the street or at park-n-ride lots. However, the rest of the design is purely Mazda – and that is good thing. It makes for a distinctive subcompact sedan.

The doors open up as wide as possible, though the rear doors were a bit on the small side. Front occupants enjoy a wide opening entry that matches up well with its competition. Trunk opening is down to the bumper and opens up to a sizeable trunk for its class – 13.5 cubic feet of cargo space.

The 16-inch alloy wheels appear to be a mix of Mazda and Toyota. They do make the iA a distinctive car…pretty sophisticated next to the rest of the class. While of its class look like compromises from their hatchback versions, the iA truly look like a complete package – designed from the wheels up. That is a huge advantage for consumers in this price range.

It is safe to say that the interior is about 95% Mazda. No offense to Toyota and Scion, but this is really a good cabin design. The single dial instrument binnacle are flanked by two digital screens for a tachometer and other vehicle information. Unlike its Mazda cousins, the speedometer has a blue background, along with blue accenting in the flat TFT screen attached to the instrument panel above the center stack. Switchgear is quite good, including the manually operated climate control. The center stack shows a short throw gear lever for the automatic transmission, a toggle for Sport mode and a handbrake. One could say that it is like being in a Mazda, but don’t forget which badge is on the steering wheel. 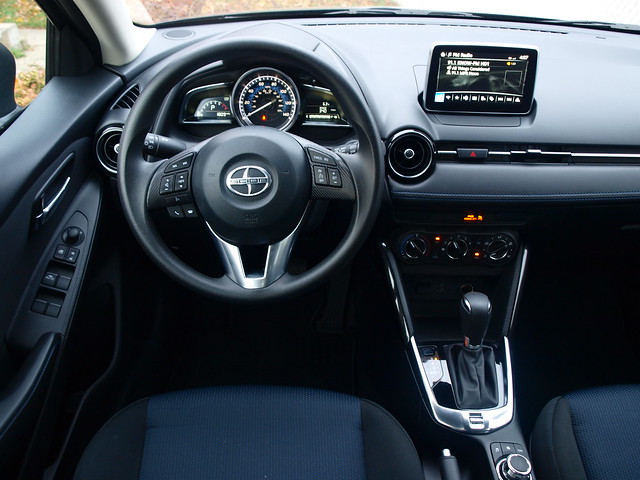 The seating color scheme is truly Toyota/Scion, with black bolsters and blue inserts. The front seats are actually just fine, providing ample comfort and good cushion support. There is plenty of room for taller drivers, though anyone wider than me might not be as comfortable. Plus, the lack of an armrest for the automatic version is a concern. Rear seat room is fine for children and smaller adults, though one could find leg room just fine. Headroom will be a challenge for taller rear passengers. Let us not forget about that 13.5 cubic foot trunk that is great for shoving plenty of bags inside.

Scion asked Mazda to make sure that their infotainment screen is a part of the iA package. That also includes the knob controls and switches needed to operate the system, as it is not originally designed as a touch screen. You can use it as one, but I found the switches work better for optimal operation. You do get HD Radio, but not satellite broadcasts. Apps match up well through the system – especially Pandora. There is a navigation system available, but our tester did not have this live to use. Unlike most Toyota and Lexus models, there is no need for an app to use the mobile apps on the infotainment system. Bluetooth is also a great connection for your phone, though there are two USB ports available, as well.

Under the hood is a 1.5 liter four-cylinder engine with 106 horsepower and 103 pound-feet of torque on hand. It is a solid motor that has no qualms tasking on highway speeds with ease. Scion customers can choose between a six-speed manual transmission and a six-speed automatic gearbox. Our tester had the automatic, which makes it a better gearbox than offered in the Yaris hatchback. The response through the gears is effortless. Power is sent down to the front wheels for solid traction. 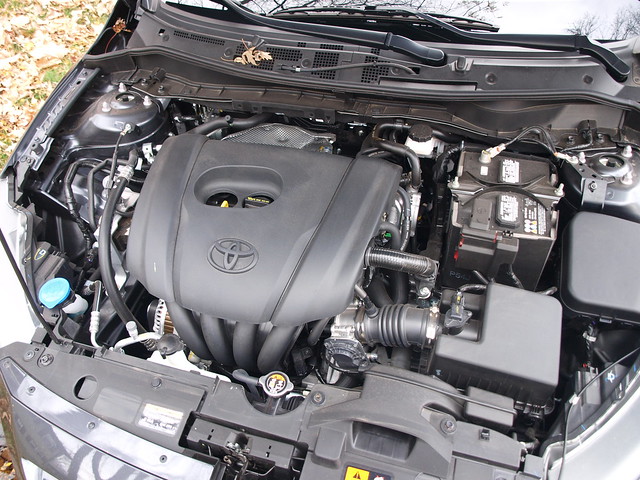 One thing that will solidify its credentials as being one of the best in its class is the ride/handling mix. Well, yes, it does drive like a Mazda, which would make it the best vehicle sold by Scion and Toyota. IN other words, the ride is solid and does a very good job absorbing indifferent road conditions. Handling is very good and shows minimal roll through the turns. The Scion iA is a very quiet and confident car that does not mind the hustle and bustle of the city, as well a run through the countryside.

Steering is good with great response from the wheel and a sharp turning radius for tight maneuvers. It is a bit soft on center, as I found it liked to drift a little bit within the lane. Its light weight – 2,416 pounds worth of car – may also play into stability when strong winds are present on the highway. Brakes are very good, with good bite at the wheels. Keep in mind, this is a front disc/rear drum setup with an anti-lock system and electronic brake force distribution as standard. Normal and panic stops show great power and good stopping distances. The iA also includes a reversing camera, cruise control and a low-speed pre-collision system standard.

The iA has begun to won me over with its high standard content and solid driving experience. The icing on the cake came from the fuel economy figure I got at the end of this run. All told, the iA achieved a fuel consumption average of 33.9 MPG. This is good, but keep in mind that the fuel tank is quite small at 11.6 gallons.

One thing that makes a Scion a great value is its monospec philosophy. You get everything standard with a few options and accessories to choose from. Pricing is set without any room for negotiation. A manual gearbox version of the iA starts at $16,495. Our automatic tester came to $17,595. If you look at what the iA offers against its competitors with similar equipment, this is a very good value. 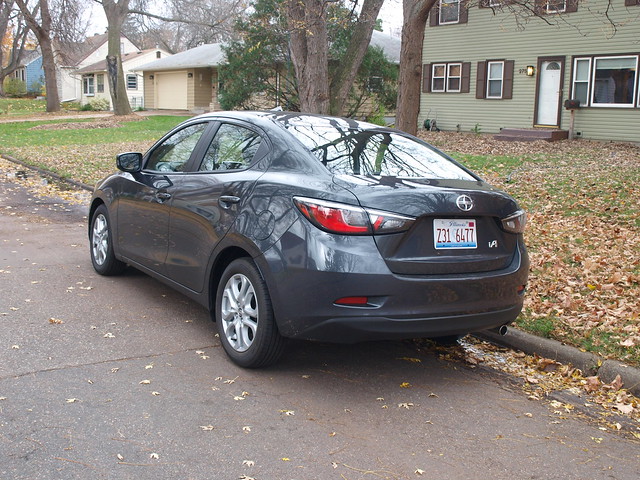 This is exactly why the 2016 Scion iA should be considered. The high value proposition alone is more than enough to engage with new car buyers not looking to spend above $20,000. You also get a very good car for the money. So what if it only comes in a sedan?

About that front end clip, I am getting used to it. I don’t mind it at all. As long as I get from Point A to work, the grocery store, the gym, the coffee house and back to my parking spot, this is good enough to live with.

Before you run out to your nearest Scion dealer, consider this train of thought: If your life requires more than 13.5 cubic feet of stuff to haul around more than a weekend a year, maybe you should consider a crossover. However, if you want a good new car for under $20,000 that is a solid driver, sporting a contemporary design, is comfortable, easy to operate and just throw a few bags in the trunk for the weekend out of town – the Scion iA is all the sedan you need.

And, I do mean sedan!