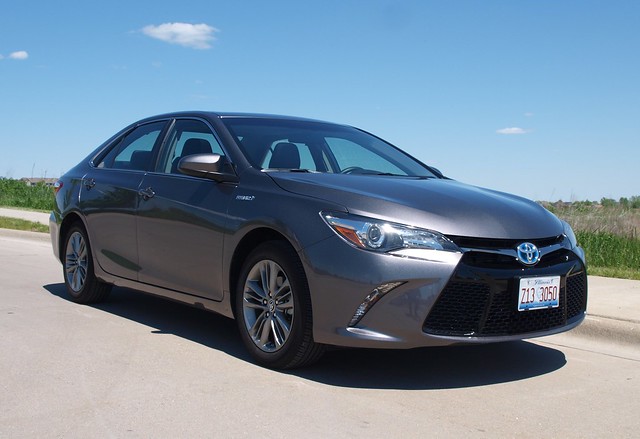 A Victory & Reseda review of the 2016 Toyota Camry Hybrid

Can you combine "sport" with "efficiency?" Rather, can you have a sporty trim available with a hybrid driveline?

An interesting dilemma to have, indeed. Even today, hybrids were seen as middle-of-the-road, run-of-the-mill machines designed for improved fuel economy and emissions. They were made for anyone looking for sustainable transportation with all of the creature comforts of their gasoline-fueled compatriots. Especially for some mid-sized sedans and a new compact SUV entrant, they were also designed to be guilt-free.

It is as someone packaged a fat-free yogurt the same as one full of whole milk. Or, a reduced fat cookie with the same package as one with all of the sugar and trans fats packed into it.

Toyota has done a brilliant job in doing exactly that. They did so by taking the best-selling passenger car in the USA and packaging it the same as their corresponding trim models. For a couple of generations now, you can get a Camry LE and XLE with the Hybrid Synergy Drive system underneath the hood. Starting with 2015, they slid the hybrid gas-electric driveline into sportier SE model. With the additional Hybrid badging and blue trim in the front Toyota logo, you might not tell the difference between it and a "regular" SE model.

It is a smart thing to package the more economical and sustainable model the same as its regular offerings. Does this practice confuse consumers? Rather, does it enable more product continuity across the lineup to attract customers towards making a choice of driveline?

For this review, I received a 2016 Toyota Camry Hybrid SE to see for myself whether you can have a sporty trim with guilt-free propulsion. Before anyone jumps to any conclusion, please read onward…

First off, I like the SE and XSE package on the Toyota Camry. For a vehicle with a very middle-of-the-road image, having these sportier trims add a different dimension to this popular sedan. Furthermore, the mid-cycle update for 2015 was better executed than I had thought. You really have to look over the car to see why it is better packaged than before. The nose stands out with lower bumper creases for the running lamps below. A mesh texture denotes the lower grille for the sportier Camrys, yet the chrome and black upper grille is the car's calling card. In all, it makes the Camry an aggressive sedan, looking for a competitor to race.

One detail that caused a stir was a recessed C-pillar trim that makes the side glass look longer. In early Camry models from the 1980s, that area actually had a piece of glass aft of the rear door. Though handsome and adding a nice illusion to the side profile, a piece of glass would be nice to put there with its chrome trim. The rear end is the nicest in Camry history, period. It is very sculptured and kept aligned with current Toyota design cues. The Hybrid SE adds a rear spoiler enhancing the aggressive nature of the exterior, along with 17-inch alloy wheels. In all, the best looking and proportioned Camry ever — 32 years in all. 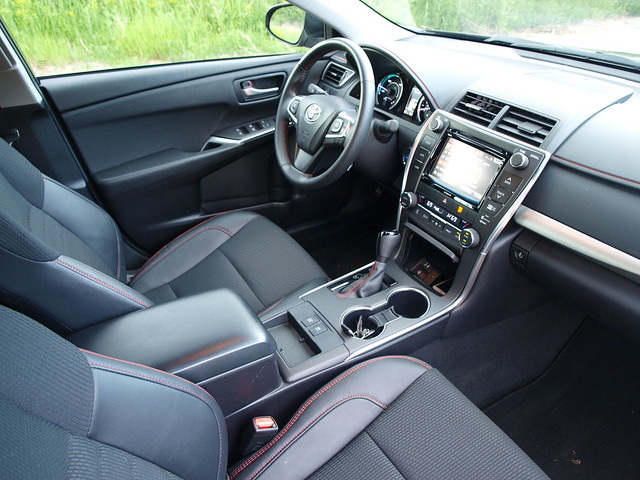 The Hybrid SE also offers a different kind of Camry experience – combining a sports-oriented trim with the efficiency of Hybrid Synergy Drive. Inside is a black cloth-and-SofTex interior with red contrast stitching found throughout the cabin that is tastefully done. The front seats are a good size with solid bolstering in the seatbacks and cushions. Rear space is good for two to three people, something that is a selling point for the Camry of late. There is a little port on the driver's side of the rear seat – that is ventilation for the battery pack behind it.

The instrument panel begins with clear gauges and a center TFT screen that is wide with nice graphics and readouts. The center stack houses the touchscreen Entune infotainment interface with minimal switches surrounding it. Even the climate control system has large tactile buttons that are both intuitive and clear to operate. The rest of the switches are familiar across the Toyota range, which means they are good to the touch.

In the Camry Hybrid SE, you can connect a smartphone through the Bluetooth connection with the Entune app facilitating Pandora and iHeartRadio through the audio system. SiriusXM satellite radio and HD Radio are part of the infotainment package, along with satellite navigation and phone pairing. There are six speakers emitting a solid sound throughout the cabin. To top it all off, this model offers QI wireless charging to keep your smartphone full of battery power all the time.

The standard Camry SE is offered with the base 2.5-liter four-cylinder with 178 horsepower on tap. However, this Hybrid SE combines the 2.5 Liter gasoline engine with the electric motor of the Hybrid Synergy Drive. In total, the Hybrid SE puts out a net of 200 horsepower. A continuously variable transmission facilitates power from the gas-electric combination down to the front wheels. It is a solid driveline, where it is flexible and surprisingly powerful. Passing performance is indeed helped by adding the electric motor to the low end mix. 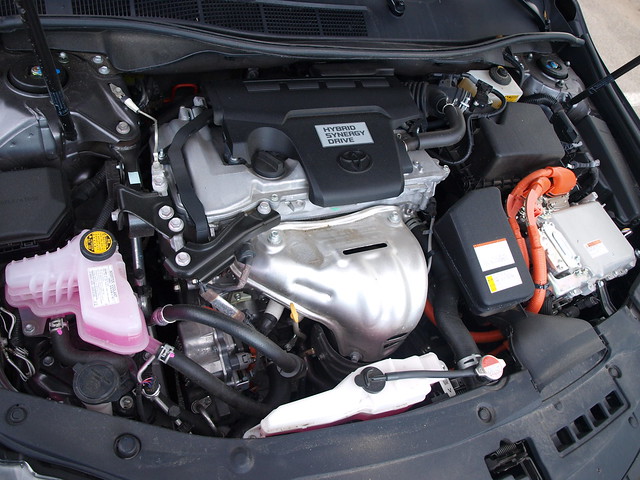 Fuel efficiency is expected to be high, because of the extra electric motor on board. In real world driving, I averaged 37.3 MPG – which would be seen as a disappointment for a vehicle set to average 40 MPG according to the sticker. Think about this: Would you rather average 37.3 MPG than, say, 30 MPG or less?

As expected, the Camry is still a smooth riding mid-sized sedan. Perhaps the word I am looking for is "balanced." On most surfaces, the suspension keeps the Camry from getting loose. Just a nice, smooth ride for everyone to enjoy. If you take the curves gently, it is well controlled and behaved. This is primarily due to a sportier set-up for both the SE and Hybrid SE in the shocks and springs. However, if you push it some more, and you will see some roll come into play.

When steering, you have a nice, thick-rimmed wheel to rudder connected to an electric system. Some steering feel is there, but not completely. It is not as vague as it is perceived to be. It is soft for feel and response, as with on-center feel. If you are supposed to be a sportier sedan, the steering should be a bit tighter and heavier for a more direct feel, but that’s just my preference. Because it is a hybrid, the brakes have an extra effort due to the regenerative system. With the extra effort, stops were pretty good in both normal and panic situations.

Pricing for the Camry is about average for its class. A base LE sedan with the 2.5 liter engine starts off at $23,070. Add the Hybrid driveline to the LE, and that base price jumps to $26,790. My Hybrid SE tester with a couple of options came out to $29,820. For a mid-sized sedan with a hybrid driveline, that is actually a good price. 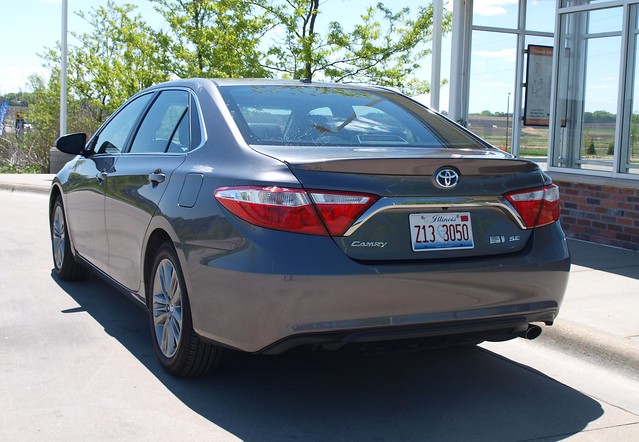 In combining "sport" with "hybrid," the Toyota Camry continues to set itself apart from its competitors. You can have something sustainable and a bit more extroverted for a guilt-free drive. With a packaged price of under $30,000, it also represents a solid value when the combination works to its advantage.

No matter how something is packaged, it has to be good. You can add the label telling it is a hybrid or fat free, but when you can keep the design continuity and offer a great value at the same time – the consumer wins. That is why the Toyota Camry continues to be the best selling passenger car in the USA.