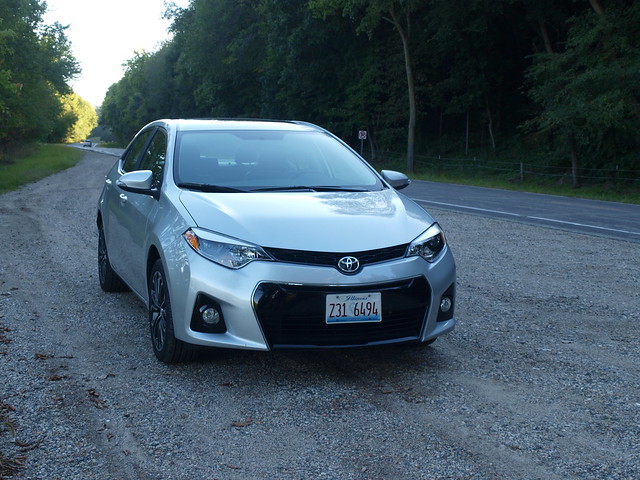 Fifty years ago, Toyota wondered whether their Corolla would hit the right note with their intended customers. It had a lot of potential – it was small enough for the world, offering efficiency with its peppy engine, provided comfort for all who occupy the car and it was built to the company’s highest standards.

Over the past half-century, Toyota sold 43 million Corollas worldwide. This volume was sold across all eleven generations – each one with a different story to tell. And, for the sake of repeating myself, there were plenty of stories they to tell!

While the E10 started it all, the E20 put the Corolla on the map. The E30 expanded the breed with the new Coupe and Liftback, adding a new chapter to the Corolla story. I remember the Liftback being the most compelling Corolla of its time. They were quite fun to drive with its lower height and coupe-like driving position. That would be the first Corolla I ever drove.

The E80 platform put the normal Corollas onto a new front-drive platform, it was the rear-drive AE86 that took on a life of its own. They would introduce us to Toyota’s new 16-valve, dual overhead camshaft engine – the 4A-GE. The AE86 would become a hero to many enthusiasts in the drift scene. The E80 generation also spawned one of my favorite cars of all time – the AE832 3-door hatchback. That body, combined with the 4A-GE, would envelop into Toyota's only hot hatch contender for this country – the Corolla FX16 GT-S. I loved that generation!

While Toyota sold millions of Corollas with subsequent front-drive generations, my engagement with car withered away. Maybe because I gained weight and could not fit in mere Corolla sedans. Nor were they engaging enough to even consider driving one. That all changed with the first Corolla I reviewed on this site – an E140 2011 Corolla LE sedan. I found it to be more spacious and competent. I guess I wasn't too excited about driving a car I could finally fit my large body behind the wheel.

The not-so-exciting experience of that 2011 LE lent itself to the arrival of a 2013 S with Toyota Racing Development wheels and low-profile Toyo tires. It was still the E140 generation, which was somewhat engaging – more so than the 2011 LE. The wheels were nice and I did return very good fuel economy while driving from home to the Midwest Automotive Media Association Spring Rally at Road America. Yet, I felt that something was missing. Something that would re-engage me with the Corolla again – just like the old E80s.

Later in 2013, I was introduced to the E170 Corolla for 2014. Toyota came to the Twin Cities for us regional journalists, bloggers and so forth to see what has changed for the world's most popular car. In short – a lot has changed. There is room again. There is a new engine technology being put forth by Toyota – the ValveMatic. In all, the Corolla was back to being its old self – accommodating and willing to do the job for everyone on board. This was confirmed with a subsequent full review of the 2014 Corolla S.

Part of the new Corolla package was the global introduction of the E180 Auris hatchback. Though we Americans have had a strange relationship with the hatchback, Toyota felt compelled to try to jumpstart its Scion brand again with bringing one over to sell. They struck the right chord as I sampled the iM on a media trip last year, followed by a full review earlier this spring. To me, this is what the Corolla should be, although I found better leg room in the Corolla sedan than in the iM. That is simply just nitpicking at this point.

For 2017, Toyota will be revising the E170 Corolla in celebration of the car's 50th anniversary. With a new nose and tailights, along with the addition of Toyota Safety Sense package – Toyota has folded the iM into the Corolla family due to the end of the Scion brand’s existence in the company's corporate structure. 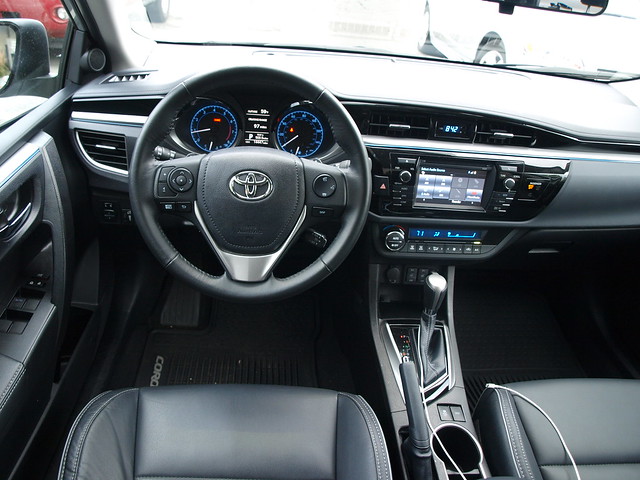 I have yet to receive a 2017 Corolla to review. However, they did send a 2016 Corolla S with the Premium package for me to work with. Of course I reviewed it before, but I am still obligated to write about it. I wonder what story I can tell about this one…

I get that people have an image issue with the Corolla. The E170 generation is better looking and actually better driving for the most part. Overall, my impressions of the 2016 Corolla S has not changed since my full review of its two years ago. The car is straightforward in design, quite comfortable with its SofTex seating, a more than willing 1.8 liter engine with 132 horsepower, along with its Continuously Variable Transmission, and provided solid fuel economy – 33.6 MPG on average. Most of all, it is the most handsome model of the Corolla line – next to the iM.

Obviously, people on a budget would want an LE or an LE Eco. I still believe that the Corolla S is a better package, providing everything you need and want in a compact sedan.

With that said, I tried to find some adventures I could take the Corolla S on. Obviously, any weekend is open to do so. My "work" during that weekend was indeed full – especially on Saturday with three car meets to attend and meet up with people at. First, there was Caffeine and Gasoline at Auto Vault. It was to culminate with a cruise at the end of the meet, but a round of messaging with an acquaintance sent me across the twin Cities to AutoMotorPlex and their annual Oktoberfest German car show.

Now, would I dare drive the Corolla in a cruise lead by a few supercars? I could, which would raise the comedy level of this article a few notches. As I said, the engine was willing and able to keep up with traffic. Its drawback was the CVT. On hard acceleration situations, the CVT would take the engine into the higher revs without letting it down when it reached cruising speed. I would prefer a better performing gearbox. Though some have said that CVTs with artificial shift points are found to be slower than old school pulley/belt models. I did offer to ride along, if I stuck around for the cruise. Alas, connections called and the Corolla flew across The Crosstown (Minnesota Highway 62 – as bookended by Minnesota Highway 55 and US Highway 212) to meet up with other folks.

Considering the second meet featured German cars, I parked the Corolla a few blocks away. I can tell you what the show is all about. There are plenty of classic Porsche 911s, Mercedes-Benzes, BMWs, Audis and Volkswagens to describe, but this is not what the story is all about.

The third meet was with my friends at MNScion. A few of us showed up, but the irony was that two of us had Toyotas over four Scions. The reality of the folding of Scion into Toyota is a serious one. I still encourage this group to stay true to the brand that have served them well and welcome those who own Toyotas and Lexuses into the fold. At its core, they are a great group and I still support them wholeheartedly. 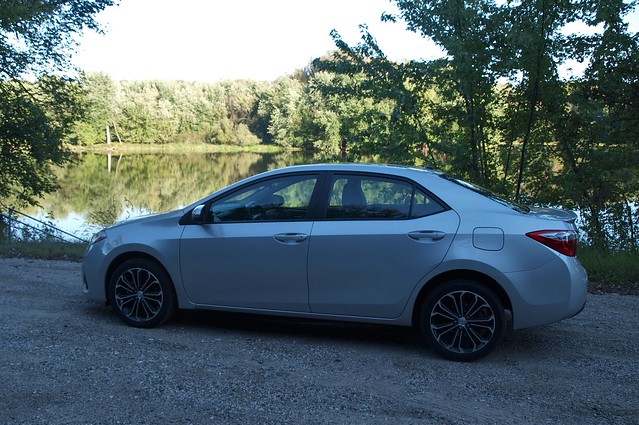 The small meet yielded something that popped in my mind. The last time I drove my favorite road out in Carver and Sibley Counties, it had plenty of construction and resurfacing done. I wondered if they completed all of that. Without consulting the Minnesota Department of Transportation (or the Carver County road works), I set off back into the west for a little drive along the Minnesota River.

This has been a road where I took various different vehicles on – from a Toyota Camry Hybrid to a pickup truck. If you wanted to cruise, the stretch of Carver County Highway 40, Sibley County Highway 6 and Minnesota Highway 93 from Carver to Le Sueur are rewarding pieces of tarmac. For the spirited driver, it is absolute fun.

The Corolla needed to stretch its sea legs, so I figured I cruise it down this rural and riverside stretch through Henderson. The result is that it performed admirably. Great, if you must prod. It is a great set of highways that bring out the best in any vehicle.

As for road construction, sadly it was not all finished. There was a detour I had to take near the Carver/Sibley County Line. A couple of Carver County highways and Minnesota Highway 25 took me around what I consider to be the best section of the highway – right along the river.

It was not to say that the rest of the drive was less splendid. The road tested the Corolla's suspension – front independent and rear torsion beam setups. The latter seems to be a point of contention with those who want to love the Corolla, but can't for some reason. I remember the media drive I went on where the rear suspension was brought into question. Granted, this was a nod to keeping costs down for affordability sake. However one can now argue for a rear independent setup since the Prius now has one. Better still, it is a double wishbone setup.

It is an old argument: Driving dynamics over cost. Certainly, if you can construct an independent set-up that would meet the cost/profit targets Toyota needs to keep the Corolla competitive.

Otherwise, the Corolla tracks quite well is and has good behavior through the curves. The steering is reactive and works well. No problem, then!

This test was repeated on a county road near another meet on Sunday. There is a series of slow curves north of Ham Lake along Anoka County Highway 17. I still did not find any problem with the Corolla's suspension set up that would make me think that it was incompetent in any way, shape or form.

I welcome a lot of vehicles into my work. It is tough being absolutely negatively critical about any of them, since the industry has improved with engineering, production and execution overall. There have been a few that were not exactly great. You can say, at least competent. When I think of how far the Toyota Corolla has come since that superb generation from the mid-1980s, I know that this car is on the right track with its sales volume translating into a satisfying ride. 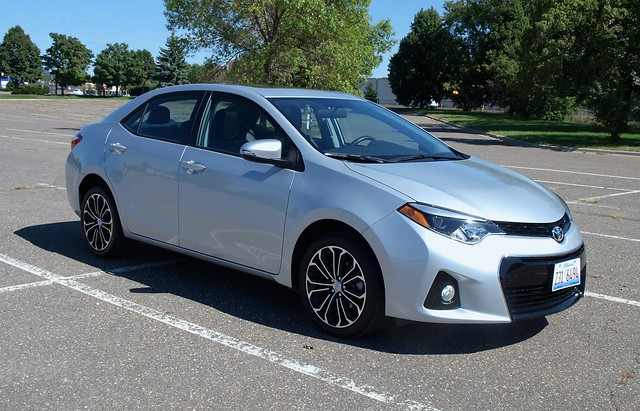 Satisfactory for whom? Families, singles and couples, and those who simply need a reliable car to commute in, for starters. You cannot go wrong with a value proposition, such as the Toyota Corolla.

While we‘re on that subject, I have to report that the sticker price on my 2016 Toyota Corolla S with the Premium package came to $23,890. Not a bad price, considering that most "high line" compacts are running into the $25,000-plus range.

I hear it all the time – what the Corolla is and is not. Let me reiterate something – numbers do not lie. In 50 years, 43 million units were sold worldwide. There may be better cars in its class, but do any of them have the track record as the Toyota Corolla?