A Victory & Reseda review of the 2016 Toyota Tacoma

This is what one of you said. Maybe a few of you. But, it is a code for Toyota's mid-sized pickup offering. It tells you how it is affectionately named for a food in which its origins have been debated through multicultural and culinary channels.

Which leads to be a somewhat-related story. Like most teenagers, my first job I ever had was at a fast food restaurant. Back then, it was an independent unit of PepsiCo, based in Irvine, California – not a part of a fast food empire out of Louisville, Kentucky that is joined at the hip with KFC and Pizza Hut. Taco Bell was a fun place to work then, although being the fat kid at the fryer was a bit low end for most folks to bear. I survived it. Who knew that frying taco shells would lead to reviewing a Taco(ma)?

The Toyota Tacoma is more than just a vehicle with a food-derived nickname. It is part of a lineage of trucks that Toyota has been known for throughout the decades. It has been said many times about the reputation of Toyota trucks – rugged, solid, sturdy, reliable, tough are among the adjectives used to describe them. Whether you called it a Stout, a HiLux, a pickup or a Tacoma, one expects excellence from a "small" truck built by Toyota. 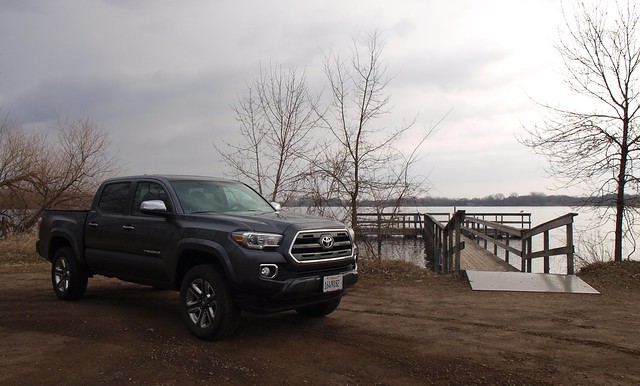 For 2016, Toyota introduced an all-new Tacoma. They done so by going deeper than the cab and box design. Yet, they left a lot of things untouched – the heart and the spirit of the Tacoma.

Yet, there is a disturbance in the mid-sized pickup universe – General Motors and its latest Chevrolet Colorado/GMC Canyon duet. Because of the sales of GM's mid-sized trucks, Toyota had to make sure its new Tacoma was ready to go to battle with them.

In short, the Tacoma is as ready as it should be.

How ready? I took a 2016 Tacoma Limited Double Cab with its great four-wheel drive system and played with its capabilities. The result is perhaps not surprising…

I always start with its looks, because, as I found through social media, is is what makes the first impression…and reaction. Toyota pushed the boundaries of what a mid-sized pickup should look like. It avoided trying to mimic the larger Tundra – even though one could trace a few "family" design traits. Don't get me wrong – I love the Tundra! I just love the Tacoma even more.

The roofline is more squat than the Tundra, but that was intended to distinguish these two classes of pickups. The box has a cleaner design and offers some design distinctions that are subtle, but appropriate for a hard-working pickup. Yet, go face-to-face with the Tacoma and you get a truck that means business. An integrated bumper and that hexagonal grille pronounces it arrival with gumption and swagger. The Double Cab doors open wide with huge access into the cab. 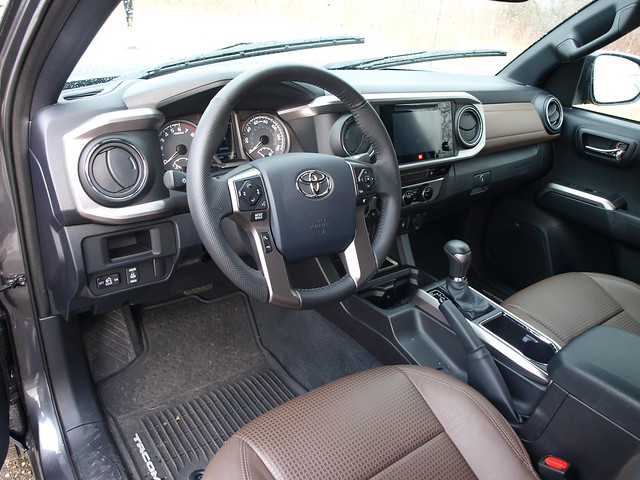 The main complaint about that squat roofline is the lack of headroom. Certainly, my six-foot-one frame with a tall torso is fine behind the steering wheel. Anyone taller than me would have to play with the seat height and recline to get comfortable without bumping his/her head against the moonroof. However, the Limited's leather-like seats were fine for the job it had to do, although I would like a bit more rear legroom for someone to sit behind me for even short journeys.

Large dials help make the work of driving easy in the Tacoma. A TFT information screen in-between these two instrument dials provides instant information easily, thanks to controls on the huge steering wheel. Entune powers the touchscreen positioned high on the center stack, while a total of seven JBL speakers pump out the best sound I have heard in a vehicle of its class. Not to mention the overall interior design and execution makes life easier for the Tacoma owner – straightforward and to the point.

In this tester, I had the privilege of working with an all-new engine for the Tacoma. At first, it appears to be just another one of Toyota's corporate 3.5 liter V6. Except, this one runs on an Atkinson Cycle. Usually, the efficiency of an Atkinson Cycle engine is reserved for hybrid gas-electric vehicles. Why would one put it in a pickup truck without an electric motor attached to it? The idea is to draw more performance out of the engine, while returning better fuel economy. The reality is that this 278 horsepower V6 simply does the job of pulling a 4,480 pound pickup truck by chomping down on the revs and motivating it up to speed. 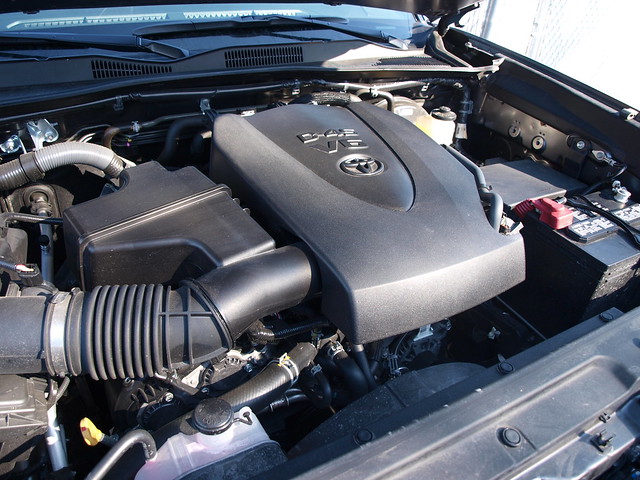 This Limited Double Cab had the six-speed automatic transmission connected to one of the better four-wheel drive systems in the world. You will feel this system work – especially in 4-High. The traction and capability are impeccable. In terms of fuel economy, I was able to capture an average of 18.5 MPG with a high of 22.1 MPG.

If you must know, this Limited Double Cab 4X4 pickup has a payload of 1,120 pounds with a maximum towing capacity of 6,400 with its Tow Package equipped. Tacomas are designed to tow up to 6,800 pounds and can haul up to 1,540 pounds – depending on configuration, of course.

The best way to describe the overall driving experience of the Tacoma is it operates under one big pulse. My idea of a truck is not one where you feel immune from the outside world and you do not know what it is exactly doing. The Tacoma is neither quiet or loud, but you can certainly feel it work. That is a good feeling! The ride is very smooth, with a great suspension system that smooths out everything in its wake. Handling is actually very good, though you do feel the roll and lean beyond its limits. Otherwise, it corners very well, with an excellent steering system in both 2-High and 4-High. Reaction from the large wheel is very good, although tight maneuvers require some fancy wheel/shifter work. The Tacoma also has a very powerful braking system, which reacts extremely well in normal and panic situations. 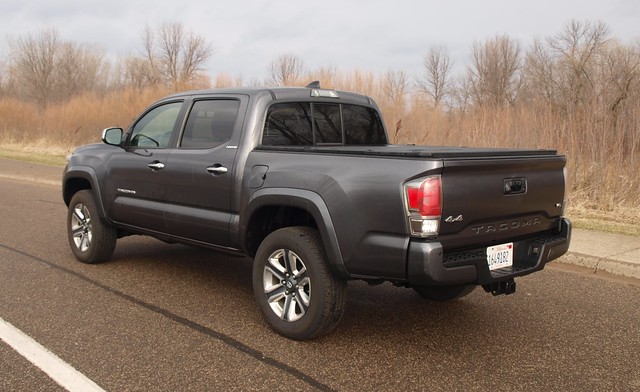 The Tacoma is offered in two cab types, two bed sizes, five trim levels, two final drivelines, two engines, two transmissions…all for a total of 29 different variations. Starting price for a Tacoma SR Access Cab 4X2 is $23,300. This Limited Double Cab 4X4 tester came out to a sticker price of $40,020. Some of you might think that is a bit expensive for a mid-sized pickup. Consider that my second favorite truck Toyota sells – the 2016 Tundra TRD Pro CrewMax – is about $6,700 more.

My quick take on the "Taco" is simple: This is a truck worth owning. Heck, I really love this truck. It is fun, powerful and can get your out of trouble in a pinch. Yet, I will also argue that the Tacoma is a tough truck for work. If configured with the right trim, engine, cab and towing specification, it could be as formidable at the jobsite than its larger cousins.

Yet, I live in big truck country. Nothing smaller than a half-ton full-sized pickup will do. I get it. Anything smaller is for "play." Perhaps it is the native Californian in me – one that grew up at the heart of the "minitruck" movement. This was when Toyota showed its muscle among smaller pickups as it embodied one of the toughest frames and the best four-wheel drive systems in its class.

That tradition continues in the newest Toyota Tacoma. It is a truck that has been generations removed from the HiLux and the famed SR5 4X4 pickup seen on "Back To The Future." Yet, the heart and soul is still there.

It is the most delicious "Taco" I have had in a very long time.