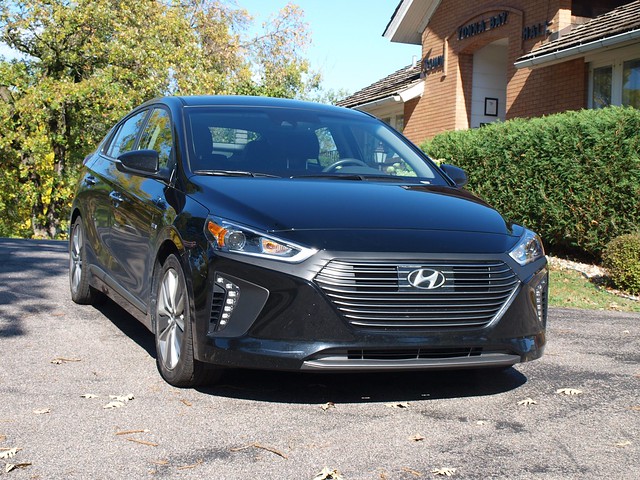 A Victory & Reseda review of the 2017 Hyundai Ioniq

Before we talk about the car featured in this review, I must address the proverbial elephant in the room.

As the new Millennium arrived, so did the gas-electric hybrid automobile. It came in the form of a four-door sedan, called the Toyota Prius and a two-seat commuter hatchback called the Honda Insight. From these two similar-but-different automobiles came what could be seen as an automotive revolution. Others have seen it as the antithesis of what we have grown to understand what an automobile really should be.

No matter where you stand on hybrids, this is our reality. They are not going away anytime soon. After all, I review plenty of them year round – the number of them I work with has grown annually.

Not to mention, the number of hybrid automobile offerings have grown annually. This past year is no exception. This also includes vehicles designed from the ground up as hybrids – just like a certain aforementioned Toyota model that was introduced at the beginning of this Millennium.

However, this particular hybrid will spawn more variants on a single body style than that aforementioned Toyota. While Toyota is offered in a hybrid and a plug-in version (not to mention a wagon/MPV and a subcompact model of the same name), this one is already offered in a hybrid and an all-electric model, with the plug-in hybrid version coming very soon. 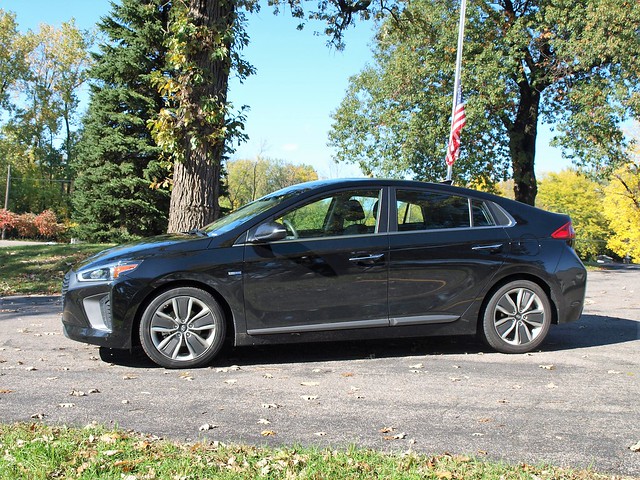 What I have is the Hyundai Ioniq. I tested the 2017 Hybrid Limited by driving it from the Midwest Automotive Media Association Fall Rally in Joliet, Illinois back home – via my overnight stop at a friend's in Mukwonago, Wisconsin. All I have to do is to tell you all about – without comparing it with the aforementioned Toyota.

This is a challenge that is made easier by several facts. First, Hyundai followed suit by integrating its own global design language onto a unique body shape. There is nothing derivative about what the Ioniq looks like, even I fone has to look closely to see which part of the Ioniq is tied to any certain model in Hyundai's global catalog.

With that said, the Ioniq is actually quite handsome. The front end looks like most of the latest Hyundais out there – a familiar face that does not look out of place or too futuristic. The side profile is what you'd expect from a sustainable automobile, even without the rear quarter glass beyond the rear door. The rear end shows off a split rear window with handsome taillights. My Limited tester had 17-inch alloy wheels that looked the part of being sustainable. 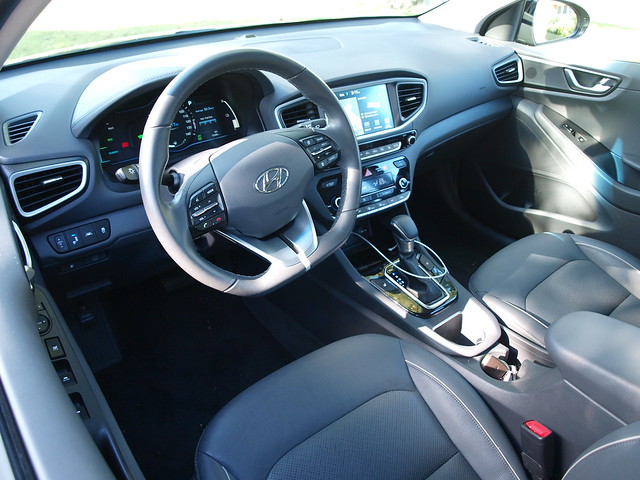 What will surprise many hybrid customers is how normal the interior look and feel. This could be from any model in the range – with familiar switchgear, readouts, and features. The instrument cluster is a bit different, with a center speedometer dial with a drive range readout inside of it. With an energy meter and warning lights on the left side of the big dial, the right side is customizable for various information.The fuel gauge is on the bottom of the big dial, while the battery level gauge is on the extreme right. In all, it is a mix of familiar Hyundai readouts put into a specific hybrid format.

It is the familiarity of the rest of the interior that is welcoming. For example, there is an actual transmission shifter in the console – positioned where it should be. This is not to make light of other hybrid automobiles, but the idea of creating a hybrid-specific vehicle that has familiar controls is something refreshing and cause of celebration. Infinity provided eight speakers with Clari-Fi Music Restoration technology for the Ultimate package on this Hybrid Limited tester.

The seats offer great size and comfort. The bolstering was there, but the cushion felt pretty flat. All is forgiven, especially when I sat in that seat from Joliet to Mukwonago and onward to the Twin Cities. I had no problems whatsoever with these seats, Rear seat room is OK, with ample head and legroom for average-sized adults. Cargo space is quite good, though the cargo cover is low to accommodate the lower window panel. The big test was taking enough pizzas, condiments, salads, vegetables, plates, sauces, and desserts for a party of 90 to a boat excursion on Lake Minnetonka. The Ioniq had plenty of room to spare between the rear seat and rear cargo hold. 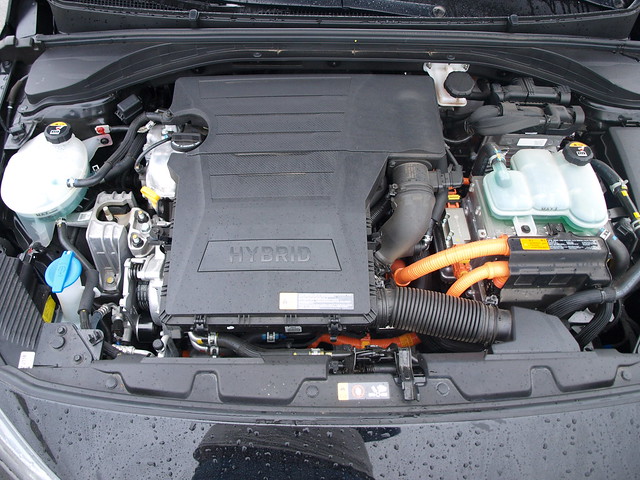 Powering the Ioniq Hybrid is a hybrid gas-electric driveline that bucks the trend seen on its rivals. It starts with a direct-injected 1.6-liter four-cylinder engine, good for just 104 horsepower. Next, a 32 kW electric motor is added, bringing the net horsepower to 139. The electric motor alone has 125 pound-feet of instant torque available, plus the 109 pound-feet from the gasoline engine. Both motors are fed to a six-speed dual-clutch transmission – which could be seen as out of place on hybrid drivelines. For this particular driveline, it works well enough for ample response to both motors. Everything goes down to the front wheels for traction and drive. Overall, I averaged 50.1 MPG between the highway drive through three states, as well as in-town driving.

In driving the Ioniq Hybrid, do not expect it to be as sporty as it looks. It is a pretty solid ride with soft, but exacting handling. Yet, it is very light – it feels light at 3,115 pounds. Perhaps it is the steering, that is truly light to use. It also helps to have a multi-link suspension out back to help keep the small hatchback on track through the corners. With a light steering, it has fine control with a good turning radius and nice feedback from the road. Brakes are also good with excellent pedal feel, along with solid stops in normal and panic situations.

Ioniq pricing starts at $22,200 for the high-efficiency Blue model. My fully-loaded Limited tester came with a sticker price of $31,460. If you wish not to use any gasoline, the Ioniq Electric is available, starting at $29,500. That model is not available to everyone unless you live in California. 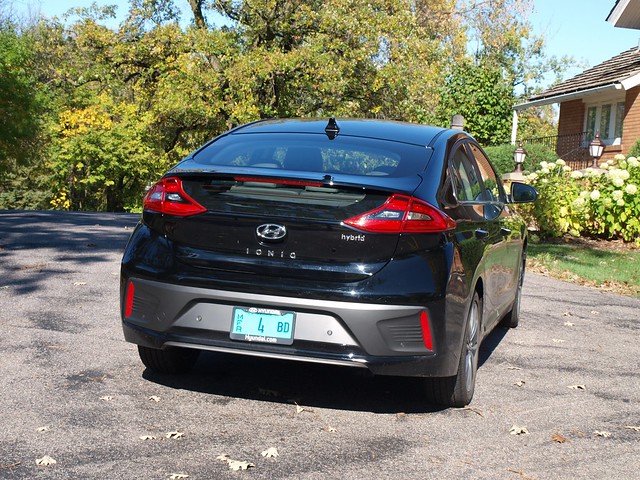 Without mentioning any of its rivals, the Hyundai Ioniq may be the right hybrid for today. Without resorting to quirky styling inside and out, the Ioniq is a contemporary, handsome, easy to use and operate hybrid made for daily driving. It also does not make you feel “special,” like other hybrid drivers sometimes feel in rival products.

Before you fall for the whimsical charms of the Toyota Prius, try a Hyundai Ioniq. You may just happen to like it better.

Oh, and get that Alanis Morissette song out of your head, please!