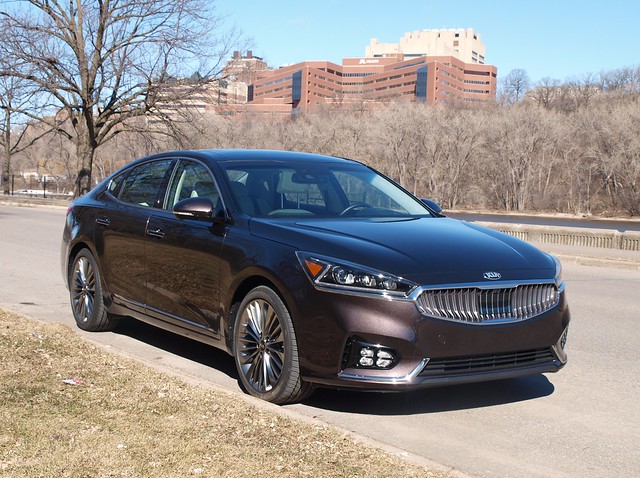 A Victory & Reseda review of the 2017 Kia Cadenza

Luxury can come from the most unlikely sources.

It is a flippant statement to make considering that Kia has been presenting us with luxurious products for the past few years. Were they supposed to do this? Was it supposed to be the job of the Hyundai side of the company to execute luxury products above all?

We're way past that now. It is now expected that Kia would augment their lineup with fine automobiles. The previous Cadenza moved the bar once set by the SX Limited versions of the Optima and Sorento. Then came the K900, which sparked the discussion as to why Kia wants to play in the same sandbox as Lexus.

With the establishment of Genesis as a brand within the Hyundai-Kia complex, should Kia still offer fine automobiles?

Think about Audi for a moment. Audi plays in the same sandbox as BMW and Mercedes-Benz, but does so with subtle forms of automotive excellence. OK, the quattro all-wheel drive system is far from subtle. The Audi Sport models are definitely not subtle. But, if you have been in an A3 or A4, then you get this mix of sport and luxury with an approach towards absolute excellence thrown in.

This is what Kia is striving for – being Asia's Audi. Not Acura nor Infiniti. Kia.

To do so, they have to create their own form of luxury, which is truly a mix of all worlds. The Stinger GT will be exactly that kind of car. We'll have to wait for it to come out to prove this hypothesis. 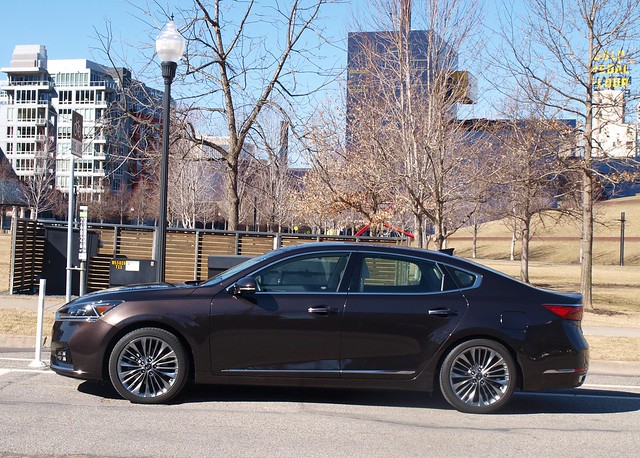 In the meantime, Kia introduced a new Cadenza. It is a vastly improved product with greater ambitions. It doesn't want to compete with the likes of the Toyota Avalon and Chevrolet Impala. It wants a foothold in the finer offerings in this size class. It wants the Lexus ES 350 and the Buick LaCrosse – two examples of ambitious large front-drive-biased sedans that offer a lot more in prestige and value.

Before we make our comparisons, the Kia Cadenza needs to stand on its own merits. This Limited tester should be able to do exactly that…right?

It certainly looks the part of a premium large car. With a 112.4-inch wheelbase, this 195.7-inch long sedan has the presence of a larger sedan. In truth, it is just a few inches longer in length and over two inches in wheelbase above the mid-sized Optima. Compared to its direct competitors, the Cadenza seems to be just in the ballpark in terms of size. Numbers aside, it has a presence of both a large sedan and a premium luxury car. There is something to be said about perception and reality.

Still, it is a sleek car that has been mistaken by others that are close to it in design and size. Is it a Ford Fusion? From the front, it might appear almost as such. Somebody actually mistook it for a Maserati. The scalloped grille of the Limited model may seem complimentary to a Ghibli or Quattroporte, but it would need the trident badge to make it so. By observing the grille alone, would would have to look for the “teeth” to correctly identify the car as a Kia. They really made this "Tiger" grille a bit more subtle than before.

What we learned is that the Cadenza is slightly larger than the Optima and can be mistaken as a Ford or a Maserati. Perhaps this positioning towards upward aspirations may be working after all. It shows with its elegant rear deck design, three-glass side roofline and the complimentary 19-inch wheels. 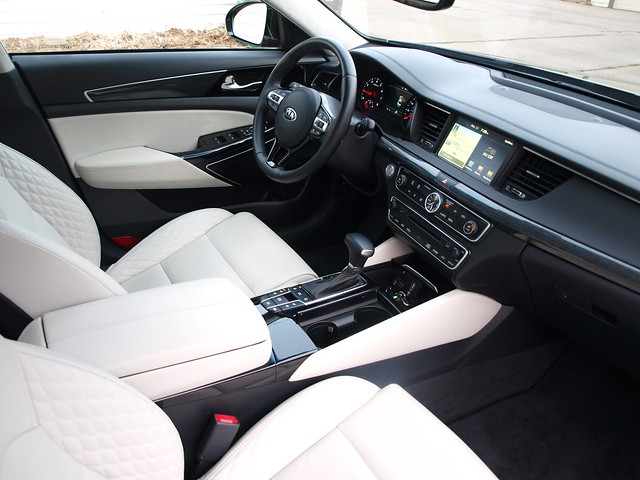 This Limited tester is typical of Kia's luxury aspirations. The quilted bolsters adds to the elegance of the materials used inside the Cadenza. The white Nappa leather is one of Kia's signatures for this upward trajectory towards luring luxury car buyers on a budget. The Cadenza's cabin is no exception – a true two-tone between the white upholstery and roof liner to the black instrument panel, wood grain trim and carpeting. It is a nice place to be.

There has been a lot of work on the cabin, including a new instrumentation set-up and improved center stack. If you have been in other Kias larger than the Forte, then you will notice the simple 8-inch touch screen in the middle of the dashboard, the wide TFT information screen in-between the two main dials and a neatly arranged set of controls on the console and lower center stack. There is a clear and easy to read Head Up Display on board this Limited tester. The large steering wheel hub might be a bit of a challenge, especially when a lot of vehicles have gone back to slimmer hubs. Each control works just fine to the touch.

The front seats offer plenty of power adjustments for rake, recline, lumbar, height and the front seat cushions. These seats are supportive and wide, right for a big car. Rear seat room offers lots of leg room, but taller passengers will be challenged by the slope of the roofline. There is 16 cubic feet of space in the trunk, which is accessible by just walking up to the rear of the car. Instead of fumbling the key fob or swinging a foot underneath the bumper, the Cadenza detects the key fob in your pocket or hand and simply opens up the deck lid.

Harman/Kardon provided superb sound throughout the cabin through 12 speakers driven by 630 watts of power. Driven by Microsoft's UVO architecture, the Cadenza offers a host of entertainment and connectivity options. Apple CarPlay worked extremely well with this system, as with Bluetooth and USB connections. You can listen to radio and work the navigation system to get you there in one piece. 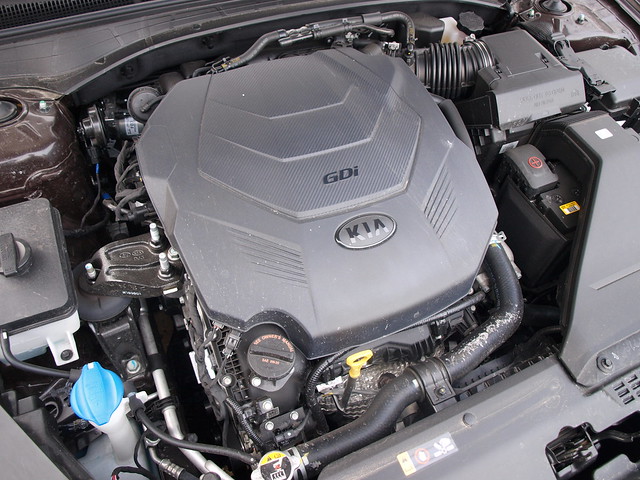 It has been a while since I drove a six-cylinder Kia or Hyundai. They are delightful engines, but given the right vehicle – they will sing. Or, rather be ready for take off. This 3.3 liter V6 offers 290 horsepower, but by the response to the throttle, one wonders if that was an understatement. It simply loves to take off. Connected is a new eight-speed automatic transmission, sending power only to the front wheels. You can manipulate shifts by the paddles on the steering wheel or down at the gear selector in Manual mode.

Fuel economy is actually decent for a big car. I turned an average of 24.1 MPG during its time in my care.

There are also a series of drive modes, including Sport, Eco and Smart. Smart mode works as a freestyle drive setting ranging all of the other modes when necessary. It would not be the best setting for the Cadenza overall, as it simply feels like Normal after all.

Ride quality is superb, as expected in a premium car. It does a great great absorbing everything, including potholes, in its wake. In a Normal mode, handling is quite good. Cornering a controlled without much lean or roll through the turns. Sport tightens everything up, without penalty to the ride quality.

The Sport setting also increases the weight of the steering system, which is driven by the motor. This provides a better feel from the steering wheel to the road. Not to mention, it has a good turning radius and does well in tight situations. It does wallow and feels loose a bit in Normal and Eco, which is easily solved by switching the drive mode to Sport. Brakes are very good, exhibiting solid stops in normal, panic and winter situations. This Cadenza came with a full suite of active safety features, from adaptive cruise and front collision warning to blind spot monitoring and land departure warning. 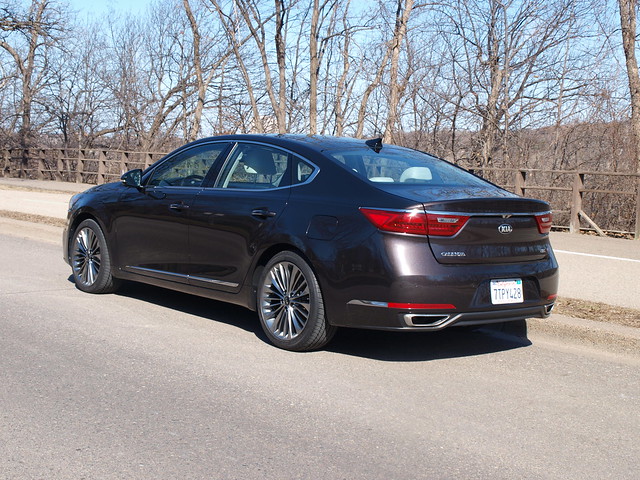 The Kia Cadenza lineup starts off with a Premium model. Pricing or that model starts at $31,990. While it has 18-inch wheels and a mesh grille, it still packs the 290-horsepower V6 and a strong list of standard content, but a smaller number of available colors. You can also equip it with a couple of packages to almost equal the content on this Limited tester. Speaking of which, the sticker price for this Limited tester was $45,290.

When I began this review, I stated that luxury can come from the most unlikely of places. I also wanted to see where the 2017 Kia Cadenza fits in the big car category. If one were to look at the Lexus ES 350, then the Kia is actually a better value. In reality, it is at a comparable price range between both mainstream and premium competitors.

Still, the Kia Cadenza is a worthy full-sized sedan available at a price point to maintain a presence in both mainstream and premium fields. The Limited is luxurious, while the lesser priced Premium looks like a great value overall. It is really which variant that would fit your needs and wants. Really, it is both a mainstream big car and a luxury sedan.