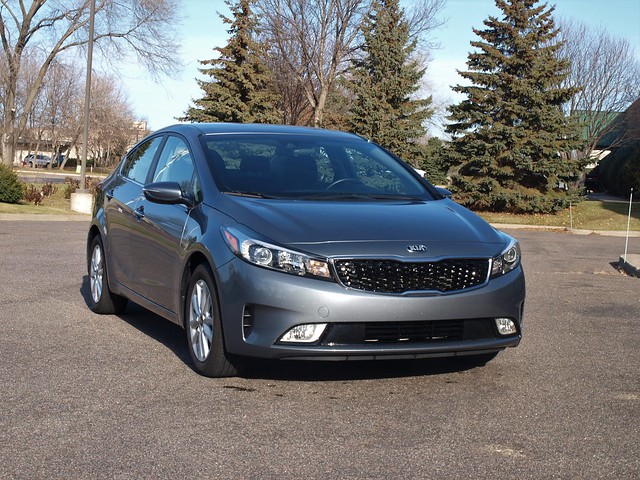 A Victory & Reseda review of the 2017 Kia Forte

The compact car has been set aside in a market that might just need them again.

Why would I say this? Consider how much gasoline has gone up in a year's time. We're not talking $4.00/gallon here, but a jump over $2.50/gallon here in Minnesota for regular fuel. It is not worth panicking, but one wonders if this is a gradual trend that would take us to the end of this decade.

At present, the automotive market is run by the SUV. People are wanting to step upwards into a vehicle, rather the traditional sedan way of stepping down. Drivers also want greater visual command of the road. They want to be the king or queen of the highway, with an air of perceived safety and security from their SUVs.

With all things relative, the compact SUV is the hottest segment. Everyone is getting one, even those who really don't need one.

Kia is one of the few automotive brands that are not following this trend. They have the Soul, which is more of a subcompact/compact/crossover car. They sell well but were never in the conversation when it comes to SUVs. The next step is the Sportage, which is a bit larger than the run-of-the-mill compact SUV. Kia's sales numbers reflect this, as they sell 2 Sportages to 3 Souls.

One would think that the Soul is Kia's sales leader in the USA. Not according to the latest figures. The best selling Kia in this country is the Forte compact.

Did we forget about the Kia Forte somehow? 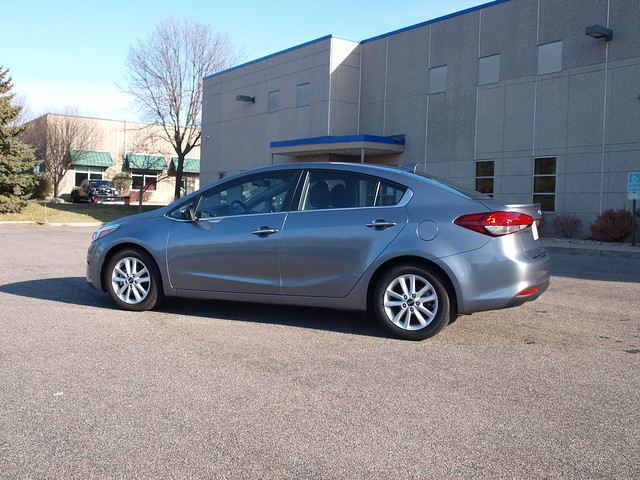 I have. But, not until recently. The last time I had one was over Thanksgiving in 2013. I drove one to a friend's place in Madison, Wisconsin for the holiday, dining at a Brazilian churrascaria for the non-traditional feast. At that time, I thought it was a decent choice in the class.

Since then, Kia customers have been finding their compact car to their liking. The Forte's sales are up in 2017. There is a reason why these compacts are hot. By circumstance, a 2017 Forte S sedan landed at my doorstep. I better catch up on this popular car…

First off, there has been a major update on the body for 2017. A new face and some subtle updates were seen on the Forte. These updates are shared with the hatchback version, the Forte5. In all, it is much more handsome than before, even with the blunter front end shape.

Otherwise, it is a handsome, low slung compact sedan that offers a bit of swagger in the way it goes. Perhaps, it is the 16-inch alloy wheels on the S model – a definite upgrade from the LX's wheel covers. Yet, I get the notion that it seems a bit anonymous now. This could play either way, but I will admit that ist improved look certainly helped in its rise in sales this year.

Stepping inside shows some updates did happen. They are not as obvious unless you look at the touchscreen system inside of this S tester. Perhaps it's a new interface for this 7-inch screen.

Otherwise, the Forte is an accommodating car inside. The low cowl, combined with a lower interior space, helps in having a large field of vision around the car. The seats are comfortable and quite supportive. The cloth upholstery is decent to the touch and feel. You feel attentive behind the wheel. All of these are good things. 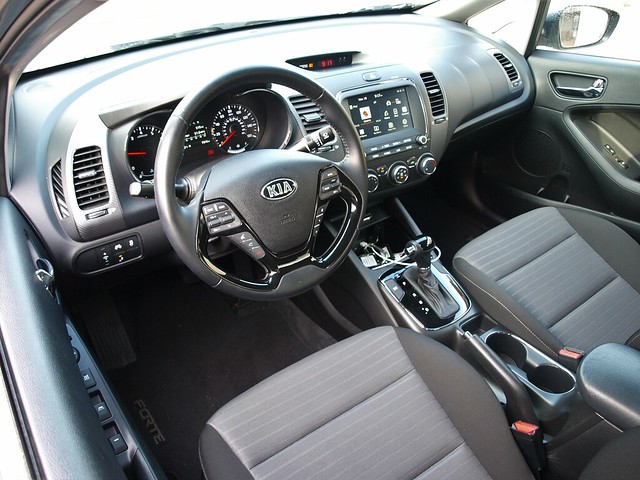 The driver has a straightforward set of instruments in front of his or her. The dials are big and the TFT information screen fits perfectly with an array of necessary information and readouts. I appreciate a good cockpit design that enables me to have everything at ready when I drive. In the case of the Kia Forte, I hope that the biggest doubters of the brand will appreciate the design of the Forte's instrument panel – even with its quirky surfaces and shapes.

I mentioned how low this car is. The roofline is fine for a tall person like me can fit behind the wheel with plenty of space all around me. Getting into the rear seat is easy with its wide opening doors and superb leg room. However, rear headroom is indeed a challenge. My head found a spot nestled where the roof and the rear glass meet. Folks taller than me (6-foot-2-inches and above) might want to sit up front…unless you are all as tall as me.

Trunk space is very good, as it goes well beyond the trunk lid opening. All told, there are 14.9 cubic feet of space before you fold down the rear seats for longer items. If you happen to have a Forte on Black Friday, go get those deals and load up the trunk! You'll be fine.

Before I talk about what's underneath the Forte S sedan's hood, I need to make a special mention of what engine this does not have. If you select the Forte5 SX, you get that supremely wonderful 1.6-liter turbocharged engine with 201 horsepower. I had this in the Kia Soul !, and it changes that crossover's game. The Forte5 SX has the nerve to battle the Ford Focus ST and Volkswagen Golf GTI and would be my pick of the lineup. Maybe we'll get one in after the new year… 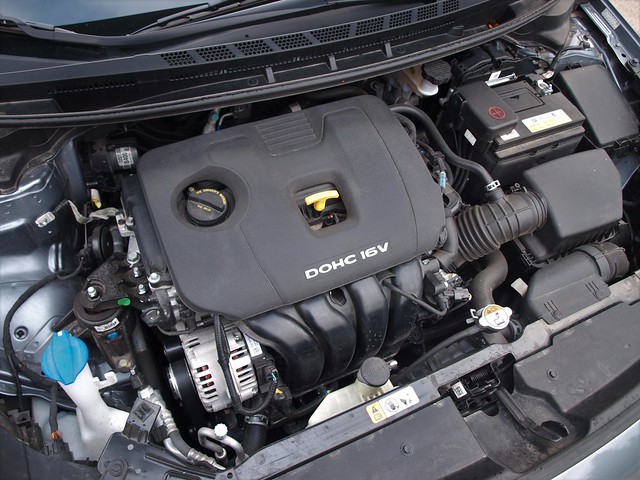 However, there are two 2.0-liter four-cylinder engines available for the rest of the Forte/Forte5 lineup. While the upper models receive the direct-injected 160 horsepower version, the S tester came with the non-direct-injected 147 horsepower engine. There is nothing wrong with it since it is a willing motor. Connected to it is a six-speed automatic transmission sending power to the front wheels.

The Forte S is also highly economical. In the end, I averaged 36.1 MPG. That's pretty good if you ask me.

In terms of driving dynamics, you simply cannot go wrong with the Forte. The ride is solid, with the suspension working overtime to ensure a very smooth ride. Handling is quite good, though some curves will reveal a slight lean. Steering is heavily weighted and controlled, with good response and turning radius. Brakes are also quite good, exhibiting solid stops in normal and panic situations.

This 2017 Forte S sedan came complete with the Technology Package for a sticker price of $21,685. Since we're in a new model year, the 2018 Forte lineup starts off with the LX sedan model at a base sticker price of $16,700 – a $100 price hike over the 2017 version. If you decide on the S sedan, choosing the Technology Package will include additional features, such as a power sunroof and a full suite of active safety features not available on the 2017 model (and our tester). The 2018 version of our 2017 tester came out to $21,895 – that is a lot of new equipment for just an additional $210!

Since I brought up the Forte5 SX and its 201-horsepower turbocharged engine, it starts at $23,800 for the dual-clutch transmission. Switching to the manual transmission will set you back another $2,200. Don't ask why…do consider how much a Volkswagen Golf GTI runs for the same amount of equipment. 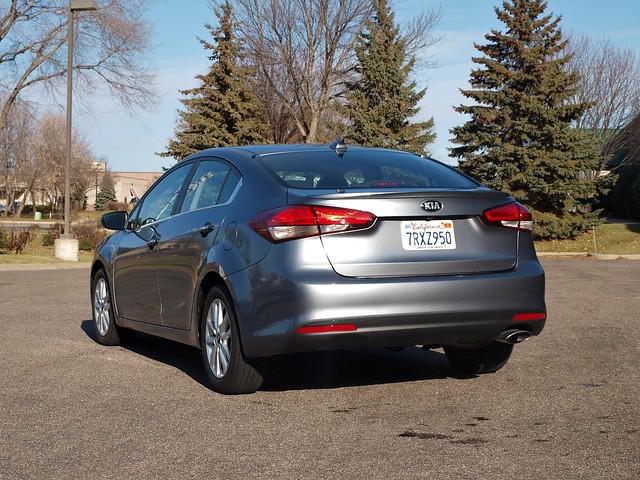 However, consider how you can get an affordable, fun compact sedan for under $22,000. Not a lot of cars in its class can claim this. Nor can they match the equipment level and vehicle behavior for that price. When the roads of America are full of Toyota Corollas and Honda Civics – both very competent vehicles, one should examine how much car – and swagger – could the average consumer get in comparison to the Kia Forte S sedan.

Did you forget the Kia Forte? After this review, you won't forget it.