A Victory & Reseda review of the 2017 Kia Soul…with a turbocharger!

From the onset, the Kia Soul was designed to be a cool car.

Consider the familiar box shape behind the engine compartment. Also, consider the quirks in the design that has attracted an average of 10,000 customers each month. It was once the best selling Kia model in its lineup, yet it maintains being one of the top sellers of the brand. After seven-plus years of it being in the market, we can certainly call this a success.

What makes the Kia Soul a success? It is simply because it is cool, hip and quirky? That certainly helps. Is it because it is practical and fun? That helps, also.

Maybe it's the Hamstars? Those adult-sized hamsters that have been selling the Kia Soul in its commercials might be a huge factor, but I can certainly imagine that they helped in drawing consumers to this subcompact crossover.

No matter which factor is key in the Soul's success, there are measurements that confirm its popularity among its diverse group of owners.

Does that mean I do not have to say anything else about this popular cool and hip subcompact crossover?

Actually, there is more to be told about the Kia Soul. They weren't going to rest of their laurels. For 2017, Kia upped the ante on the Soul by adding a third engine to its lineup. You can now get a Soul with a turbocharger! 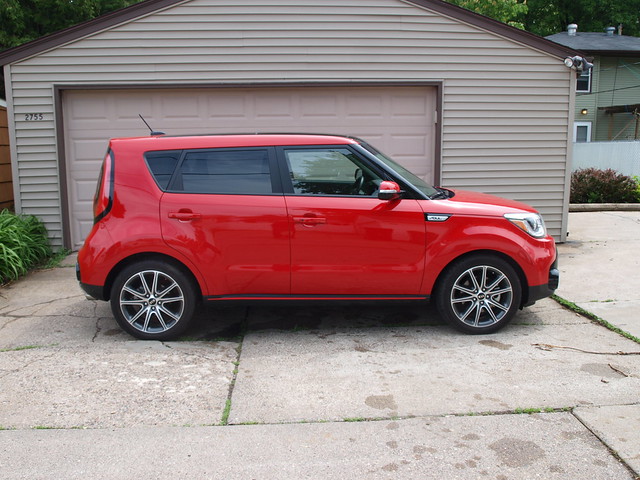 With the arrival of the 2017 Kia Soul ! Turbo at V&R's Headquarters, I get to see whether this Hamstar-driven hip, cool and popular subcompact crossover is also a fast one. Rather, this snail-infused hamster on wheels.

In the process of doing so, I have a main mission to accomplish. I have to deliver the Soul ! Turbo to an annual stop on my media calendar – the 2017 Midwest Automotive Media Association Spring Rally at Road America in Elkhart Lake, Wisconsin. It is a five-plus hour journey from V&R Headquarters, but, as always, I am up to the task.

The question is not whether it will make it or not. But, whether that turbocharger underneath this tester what the Soul needs to get more cred for this vehicle.

First of all, the turbocharger is the thing these days. The trend is to add a turbocharger to an engine to offset displacement for performance and efficiency. Kia has been doing so using two strategies. There is the performance strategy, as seen on the Optima SX Limited. Then, there is efficiency, as seen on the Optima LX 1.6T. For the Soul ! Turbo, they went for both. 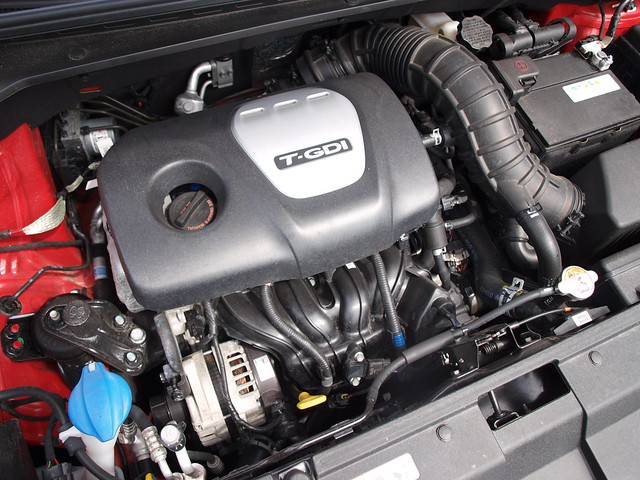 To explain, the Soul ! gets the 1.6 liter turbocharged engine seen on a few Kia and Hyundai models. However, it is rated for 201 horsepower – the higher of the two tunes for this engine. This is the same exact engine found on the Forte5 SX. Though some would argue that this 201-horsepower 1.6 liter turbo engine may be better suited for the Forte5, it becomes even more compelling in the more popular Soul.

The engine does make the difference in the Soul. There is plenty of power thrown down to the front wheels, as facilitated by the smooth seven-speed dual-clutch transmission. Though one has to be careful, as the traction control will kick in when the throttle is mashed down hard. There is some turbo lag, but not a lot of prevent passing and on-ramp delays from the engine.

For driving dynamics, it is OK in Normal or Eco drive modes. Sport is where you want to be with a heavier steering feel and better transmission-to-engine-to-turbo control using higher gear thresholds. In Sport, you can full realize its purpose for what Kia wanted out of the Soul ! Turbo. The brakes were simply average in stopping power and pedal action overall.

Inside, there is a new sports steering wheel with a flat bottom rim and some orange stitching accenting a mix of leather and cloth eating surfaces. Orange accents continue onto the stitching on the steering wheel and on the gear lever. The seats are actually comfortable, despite the lack of deep bolstering. Rear seat space is very good for a good my size. Cargo space is quite sizable, starting with 18.8 cubic feet behind the rear seat with the cargo cover on. This was perfect for a laundry basket of my clothes to the two bags I took to the MAMA Spring Rally. If I had a lot more items to bring, then I had up to 613 cubic feet of usable space to work with. The Soul's tall roof is a great advantage in terms of cargo utilization and management. 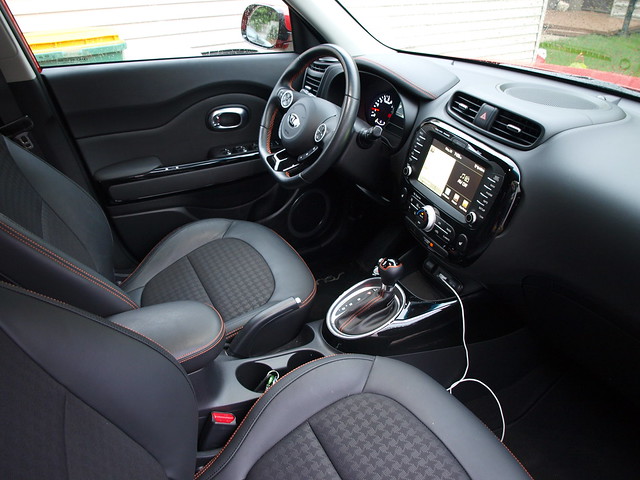 While Harmon/Kardon's plethora of speakers provided a soundtrack on the road, I had concerns about the gltichiness of the UVO-driven infotainment system. There were moments when both SiriusXM and Apple CarPlay's iTunes music player had interruptions and other connectivity issues during my time with it.

Besides the brakes and the infotainment, the Soul did more than enough of its tasks during my time with it. With the high-whirring and swooshing snail connected to the hamster's motor, I managed to get through a few car community visits and some additional miles to get ready for the pre-dawn drive to Elkhart Lake and the MAMA Spring Rally.

The real test came at 5:00AM on Tuesday. With 334 miles to cover, the Kia Soul ! Turbo was ready for the task. It took a quick run out of Minnesota into Wisconsin to get the snail-driven hamster on the road. We stopped for breakfast in Roberts, one final gas stop in Stanley, a break in Stevens Point and a stop for a conference call and lunch with a friend in Grand Chute. Four-plus hours of road covered by dodging semis and locals to get to a place I haven't been since my days living in Madison – 15 years to be exact.

One good thing came about – Stevens Point is a lovely town. If you travel along Main Street, you would see some classic homes along the way. I would visit there again…

From Grand Chute…OK, Appleton…I headed into uncharted territory. From Appleton, I headed south-southeast on the other side of Lake Winnebago. This route took me through some classic rural towns, such as Chilton and New Holstein. It was raining – the kind of rain that was heavy and gave permission for semis to splash you with a major tidal wave. It was if the Soul needed a car wash… 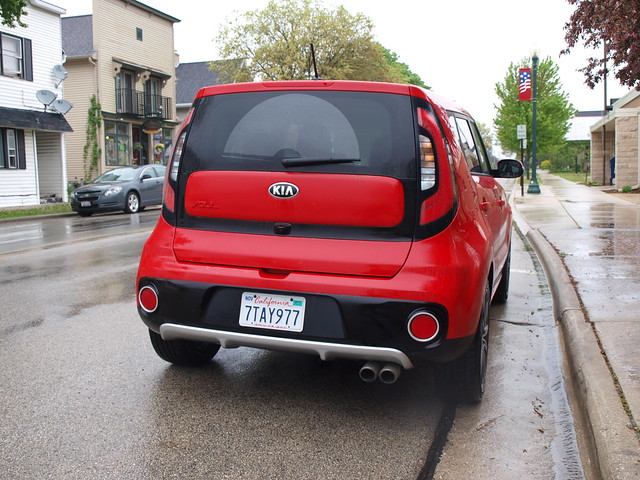 At New Holstein, a sweet county road appeared. It was your beat-up, two-lane highway that wound back and forth until you got to Elkhart Lake.

In all, the drive to the MAMA Spring Rally was worth the length and time. Oh, and in case you're wondering, the Kia Soul ! Turbo averaged 28.5 MPG.

The 2017 Soul is offered with three trim levels. For the 1.6 liter non-turbo base model, your starting price is $16,100. If you want what I tested – the ! Turbo – the base price jumps to $22,800. There is more, however, Because this tester came with the Panoramic Roof and Technology Packages, this Kia Soul ! Turbo came with a sticker price of $27,620.

The snail-infused hamster certainly got me to where I needed to be. But, what's next? What would Kia do for an encore…

How about all-wheel drive?

It took some time, but the Kia Soul got its power infusion. All the cool and hip folks will dig it. After all, they do dig turbochargers…do they?