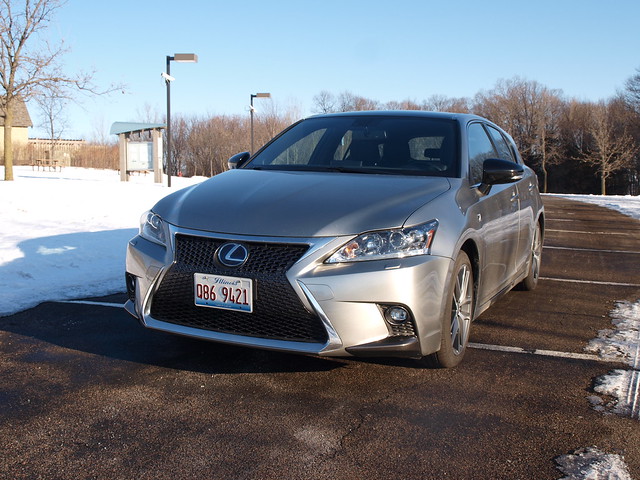 How do you end one year and start a new one?

In my world, it would be a car. Though it has never been the case over the years. For those moments, I found solace in driving on New Year's Day. It is usually the reboot of the Gregorian Calendar – a time for renewal and a fresh start.

There are plenty of traditions that denote the New Year. For example, the Dutch would make Oliebollen – New Year's donuts – as a way to make it a fresh start. Americans would try to catch the Tournament of Roses parade pre-show on KTLA-TV. This year, the parade is on Monday due to an ages-old tradition of "never on Sunday."

A long time ago, I began a new tradition. If I had a vehicle with me on New Year's Day, I would take a drive. That is, of course, if I was sober from the night before and found myself not around people that day. One such drive was in my 1991 Acura Integra RS Coupe as I found myself somewhere out in Eastern Contra Costa County, in the outskirts of the Bay Area. It would be a nice, long drive to clear the head and celebrate the renewal of life.

The last time I took a drive on New Year's Day, it was to join my friends at Dakota County Technical College for some racing on a mixed surface of snow, ice and dry tarmac. The New Year was celebrated from the cab of the 2016 Toyota Tundra TRD Pro, though I did ride shotgun with some friends who took to the track. That certainly rung in the New Year.

How would I ring in 2017? It may be different than most, because it is an anomaly in itself. Let me ask you: What car do you know is a compact hatchback with a gasoline-electric hybrid driveline? There are plenty of answers – mostly from Toyota. Let me make this a bit more difficult: How about such a car from a premium brand?

That question is no longer difficult to answer. There is now more than one. If you responded with the Audi A3 Sportback eTron – you are correct. It is a plug-in hybrid which had some positive feedback from it.

One could even throw in the BMW i3, especially the extended range version. Then again, some might consider it too small to be considered alongside the A3 Sportback eTron or this other car.

However, there is another hybrid premium compact out in the marketplace. You might remember it. I have reviewed it before – once in 2011 and the other after its facelift in 2014. Like the A3 Sportback, it is a hatchback. Unlike the Audi and the BMW, it does not require a plug to charge the batteries.

I am certain you recall the Lexus CT 200h. At the dawn of the New Year, let me reacquaint you with it. 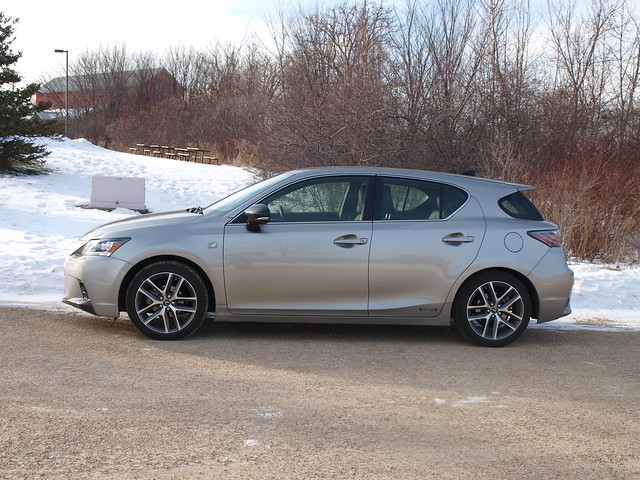 To refresh your memory, the CT is essentially part-Toyota Prius – the previous generation. Though its platform – the New MC architecture – has spawned many familiar models on these shores, the CT stands out with its unique hatchback design that would evoke something from Gaudi. The aforementioned facelift brought Lexus’ signature Spindle grille to compliment the long roof and odd glasshouse. Under the hood is the Lexus Hybrid Drive that is essentially similar to the Toyota Prius and Prius V, where the front wheels are solely driven.

Inside has taken on a lot of the design elements of the Lexus brand – from its instrument binnacle to the Remote Touch controller. It is a bit tight in the back, but “average-sized” people can sit at the key four positions without a problem. Being tall and big, I would not recommend anyone sitting behind me – unless you are very small. The F Sport version – which is the one I received for this article – offers sportier accommodations, bigger wheels and the signature mesh grille.

I was looking through my past summations of the Lexus CT and wondered why it has always been a curiosity. In 2011, I remarked how much it "turned heads" and "provoked curious glances." More so, I continued to state that "[t]he Lexus CT 200h is the proverbial Catch-22 for the enthusiast with a sustainable lifestyle. However, I would have no qualms driving a hybrid with true driving dynamics. This CT was worth every mile of [gasoline] sipped through its kitten-like veins."

A few years later, I drove the then-new F Sport version. At that time, I pondered "[w]hat is the point of this car, then?" The answer? "It is about having a hybrid with true driving dynamics. Nothing more needs to be said." 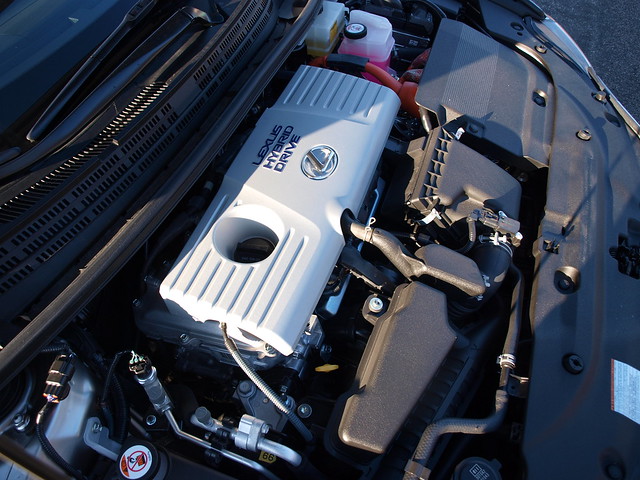 Every time I got behind the wheel of this Atomic Silver 2017 F Sport tester, all of things I wrote about this car were confirmed. The handling and dynamics were superb. Cornering was also fantastic. The front seats were very supportive. Just about everything about the CT 200h F Sport speaks to the enthusiast and those who want to be one.

Granted, it is not the quickest or the fastest car in its class. It does make up for it in Sport mode, which give the gasoline part of the Lexus Hybrid Drive system some more breathing room. This is accomplished without compromising the electric side of the driveline. I found there was a bit more flexibility out of the Continuously Variable Transmission for better throttle response when going highway speeds.

Take it on a country road and the CT wants to act like a performance hatch. There were times where I did forget that I was driving a Hybrid – and that is a good thing!

Any discussion of a Hybrid must include fuel economy. That is why someone would buy one, right? This tester came back with an average of 37.5 MPG, which is actually lower than what I usually get in this car. I should blame the weather or my right foot…maybe the traffic in the Twin Cities. I know that this car could average as high as 48 MPG-plus given the right conditions and such.

As for the usual pricing rundown, the 2017 CT 200h is available with a base price of $31,250. This F Sport tester came with not only all of the goodies associated with the additional badge; it includes the navigation package, lighting upgrade, Pre-Collision System and Dynamic Radar Cruise Control. The total sticker for all of this: $41,795. 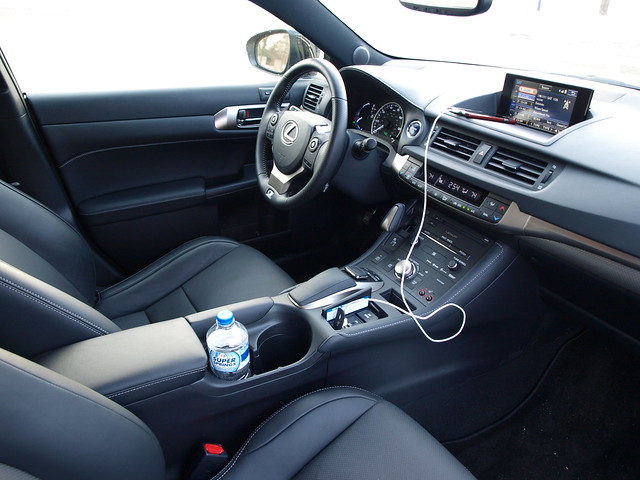 Almost $42,000 for this? Before anyone winches at the price, I better discuss the marketplace first…

Until the Lexus CT's arrival, only the MINI Hardtop, its stablemates and the Audi A3 were the only ones playing in the premium small car market. The aforementioned i3, the Acura ILX and the Mercedes-Benz CLA-Class joined afterwards. Let's not forget about the many other premium brands that have discussed offering a small car for its well-heeled customers.

Instead, these brands have turned to crossovers and SUVs. Offerings from BMW, MINI, Buick, Mercedes-Benz, Infiniti and Audi sent everyone else back to the drawing board to make a better premium subcompact CUV/SUV. This is indeed a reflection of the overall market that saw the rise in crossovers and SUVs for various reasons. One wonders if these reasons were indeed valid.

Maybe it is a matter of perception and taste. The perception that more cargo space is justified for a $35,000-plus price tag for one of these lifted conveyances. I am not sure about taste, as the CT had its share of negative feedback on design and purpose.

Let me make an argument here. The CT is a special vehicle in its class. Sure, the design is polarizing, but it's a sporty compact hatch with superb driving manners that offers high fuel efficiency. And, yes, it is associated with the Prius…but is that a bad thing anymore? The latest Prius is quite good thanks to improved dynamics and better driving manners. However, the CT is a more concentrated package that offers the efficiency of a Prius and even better dynamics and on-road manners. If you understand these two arguments, then you can get past the "h" part of the model designation and look at the F Sport piece instead.

There was one thing that made this go-round with the CT different: The time of year. Having tested this car in the summer and fall, one would never think of this premium compact as a winter car. This, combined with it being winter in Minnesota. It does not have all-wheel drive – something a lot of consumers in the Upper Midwest keep on asking about. Nor was this tester equipped with winter tires – just Michelin Primacy MXM4 all-season tires. At this point, you might just stop reading here. 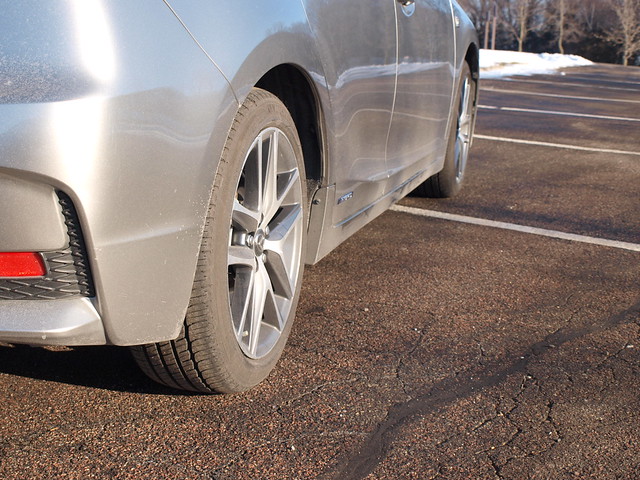 I get it. Not every consumer cares about all-wheel drive and winter tires. I do admit that I run with the enthusiast pack. They talk tires, drivelines, modifications, what they like and don’t like…and so forth. It is baffling that when roads freeze up making things challenging that the moment their vehicle is involved in an accident or a slip into the ditch, the talk of making a vehicle more competent to drive in cold weather situations should be elevated – if not frequently discussed.

Which brings me to make this conclusion: The Lexus CT is actually a very good car. It is a hybrid, but it offers great driving dynamics and handling seen on sports compacts. It is not a hardcore car, but an easy-to-drive alternative for those wanting to feel environmentally responsible which sipping less gas along the way. It is also a standout in a crowd full of contenders and pretenders – especially when it comes to premium-branded products with alternative propulsion systems.

Furthermore, the Lexus CT got a lot more love than in its previous visits with me. Maybe because people now get it. They get what it is and why it is a fine automobile designed to make people rethink the premium compact hatchback. It shouldn’t take seven model years to accomplish this, but it becomes a familiar – sometimes rare and often welcomed – sight to sore, jaded eyes. 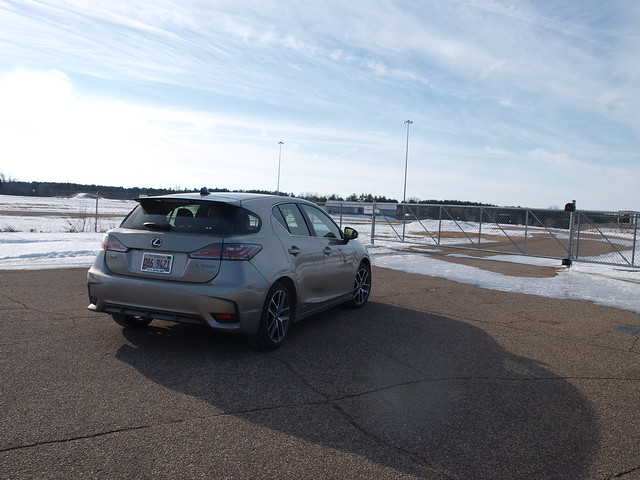 Or, just drive a Lexus CT 200h and simply enjoy the New Year. Just have some oliebollen and make it a sweet New Year.