When I was a Boy Scout, they told us to simply "be prepared."

As I was looking on my vehicle work schedule last week, I had to smile. Perhaps I had the right vehicle to work with considering what I have been reading all week.

Upon arrival of this vehicle, the National Weather Service made this forecast for the following evening for V&R Headquarters:

Rain before 8pm, then rain and snow between 8pm and 11pm, then snow after 11pm. The snow could be heavy at times. Low around 29. Northeast wind 10 to 15 mph, with gusts as high as 30 mph. Chance of precipitation is 80%. New snow accumulation of 3 to 7 inches possible.

The forecast continued to state the following for the next day:

Snow. Patchy blowing snow after 2pm. High near 30. Blustery, with a north northeast wind 15 to 20 mph, with gusts as high as 30 mph. Chance of precipitation is 100%. New snow accumulation of 3 to 7 inches possible.

In other words, I may have the right vehicle to manage about 24-plus hours of a snow storm that would dump a total between 7-17 inches of the white stuff. Something with real ground clearance, full-time 4WD and over 300 pound-feet of torque to get through all of this. Something that has a proven chassis and driveline built to manage this kind of weather. 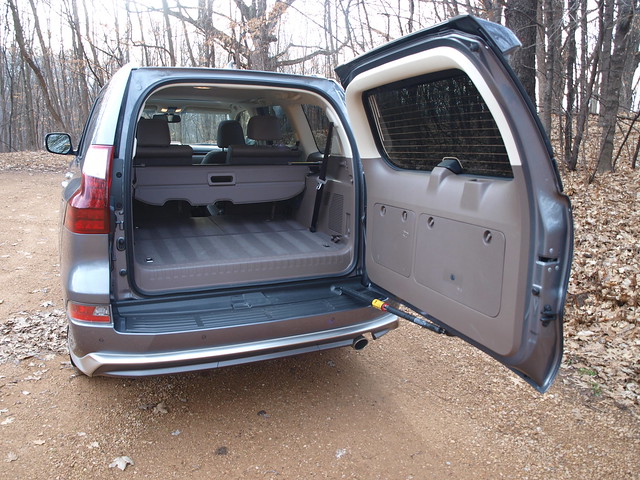 The 2017 Lexus GX 460 is indeed a formidable machine designed to handle this kind of storm – and its aftermath. I was ready to see if it can make this so-called forecast into a complete comedy.

The GX is also known by another name unfamiliar to North American SUV enthusiasts – the Toyota Land Cruiser Prado. Outside of our realm, the Prado is known to tackle not just other kinds of weather, but of different forms of terrain. Prados are commonly seen on the Australian Outback, the Russian Steppes, the African savannas, the Andes, the Alps and the jungles of Borneo. The point being is that these vehicles were designed to handle anything in its wake.

When a vehicle of this kind becomes a Lexus, one wonders whether its legendary off-road worthiness would be softened to cater to an upmarket clientele. I approached this question back in 2013. It is one tough machine, even swathed in leather, wood and the oval-L badge. It even stopped in time before an errant deer crossed into the SUV's path on a local highway.

Since then, the GX added the Spindle Grille, multi-lens headlamps, new tailights and some updates on technology and active safety. Today's 2017 package is more contemporary for today's discriminating luxury SUV consumer. It certainly feels like it. 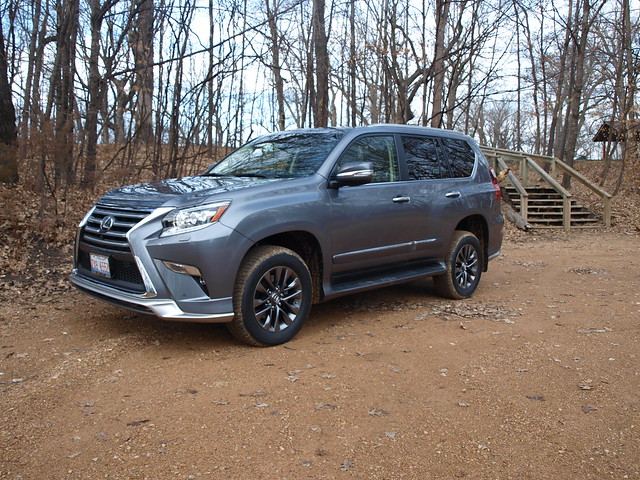 In this latest model, I noticed the adaptive cruise control and lane departure alert added to the GX. They even offered the luxury model, with second-row captain's chairs. These are just the big differences I've noticed in the GX compared to the last one.

The formula remains the same with its 301 horsepower 4.6 liter V8, throwing down 329 pound-feet of torque. It is driven through a six-speed automatic transmission and a full-time, two-speed four-wheel drive system. All of this is designed to send plenty of power down to all four wheels without any hesitation.

If you're a towing kind of person, the GX can pull up to 6,500 pounds from the rear of the SUV. Bridgestone provided the rubber underneath this 5,130 pound beast with a set of 18-inch Dueler H/T mud-and-snow rated tires.

Rarely do I work with a vehicle where the suspension is adjustable for dampening and height. These two adjustments are found on the center console next to the gear lever and are very logical. A combination of these two, along with the 4WD ratio selector, help in making easy work of going away from the tarmac. 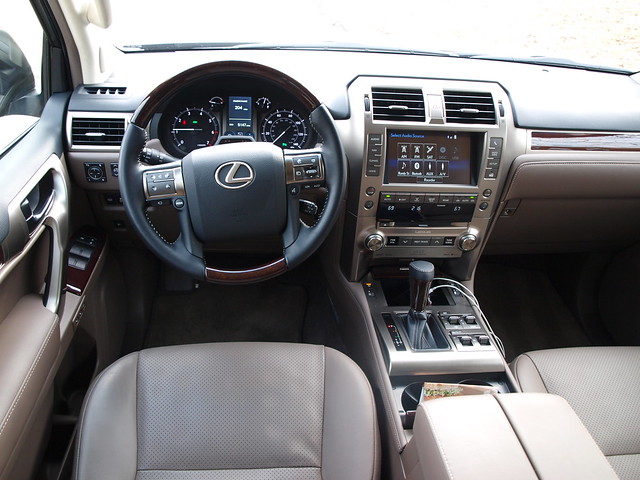 The seats are big up front and offer heating and cooling to manage the climate. The steering wheel is also heated. The second row seats are also heated. Enhanced by its own climate control zone. There is the choice of putting up a third row of seats, or leaving them down to swallow up to 64.7 cubic feet of cargo.

All of this sounds like a vehicle that is ready to tackle anything. That is when I saw the latest update from the National Weather Service for V&R Headquarters:

A chance of rain before 9pm, then a chance of rain and snow between 9pm and 10pm, then snow likely after 10pm. Cloudy, with a low around 28. North northeast wind 10 to 15 mph, with gusts as high as 30 mph. Chance of precipitation is 70%. New snow accumulation of less than one inch possible.

Seriously?!? The NWS also added that the next day's projected accumulation would be 2-4 inches by Saturday morning. A few more websites further, showed that the snow line was south of the Twin Cities, with Blizzard Warnings issued across Southern Minnesota.

The day of reckoning arrived. The yard and the neighborhood around V&R Headquarters showed absolutely nothing on the ground. There was snow, but one had to go further south in the state – or into Wisconsin – to find any form of accumulation. I was disappointed. The Lexus GX did not see anything worth testing on – except for some designer dirt from a photo shoot earlier this week.

Let's get back to the Lexus GX 460, shall we? It is a capable machine worthy of the platform it rides on. Granted, some may nitpick about the front end, the ride quality in Comfort and Normal, a semi-useful third row of seating and the fuel economy – turning an average of 16.5 MPG – we often forget that this is not a lumbering ox that should live at some fancy cabin up by any given lake. 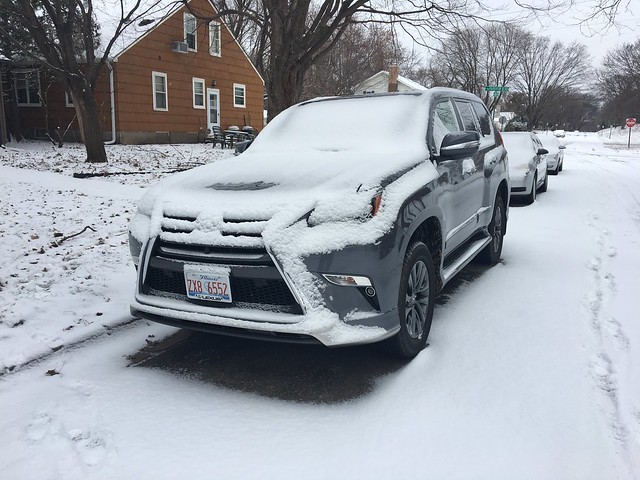 What would have made this story perfect would be to see the GX in action on snowy roads. This is for the testing of its four-wheel drive system. Well…it did…for half a block. On the evening before it was to be picked up, an inch of snow fell at V&R Headquarters. It made for easy shoveling and sweeping, but not enough to truly show what the GX can do in this stuff. It did make for a pretty final photograph, though…

In truth, the GX is a highly capable machine. This $69,920 high-riding, mid-sized, three-row SUV was originally designed to handle a lot more than the streets and side roads where they typically roam.

Maybe if the meteorologists were correct, we would see how highly capable the GX would be.