We automotive journalists are supposed to be unbiased. The same goes for anyone who covers the automotive industry in any capacity.

I try to be unbiased when it comes to objective pieces, such as vehicle reviews. At least I try…

However, there are moments when you drive something and all objectivity is thrown out the window. A vehicle so good that it does something emotionally, spiritually and physically to eschew all neutrality the profession expects out of you.

In the past six years of Victory & Reseda, a select few vehicles garnered such reaction and response to my psyche. This is one of them.

The problem is about the Lexus RC F is I am not supposed to fall in love with it. I am supposed to stand back, look at it, drive it and say something objective in comparison to the BMW M4 or some other competitor. I am supposed to win over the hardcore enthusiasts who believe that anything German is great and good.

I could say the same for American car lovers, truck lovers, JDM lovers and so forth.

However, this is my second RC F. Actually, my third. There was the 2015 RC F in Ultrasonic Blue that enthralled me to utter love for it. Then there was the 2016 RC F in Molten that was put on a track. Now comes this 2017 Infrared model with carbon fiber roof and retractable rear wing. The intent was to purpose it for publication in another outlet. I was surprised that I never had a chance to write about it in that magazine.

In four stints with the RC F – two on the road and two on the track – one thing is clear about the RC F. It still does something for me.

It is easy to point out the reasons why I came to this conclusion. Simple explanations may not be enough, however. But, give me a chance to parse these thoughts out here… 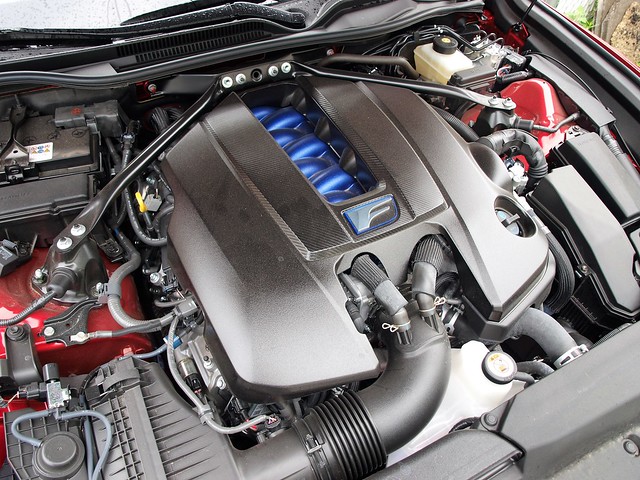 WHAT DOES IT HAVE UNDER THE HOOD? You expect to have extraordinary performance from a 467-horsepower, 5.0 liter V8. You expect it to match up well with a smooth-shifting eight-speed automatic. You expect dramatics – such as exhaust noise to throttle position. If you have never driven an RC F, then you will get swirled up into what it does to the soul. Drive it more than a few times, and it starts to change your mood. It induces happiness.

Then you discover how the RC F plays in normal traffic. It is not like most high-performance cars where it feels unhappy in city traffic or hates getting across town for groceries. It wants to run, but knows it has to be on its best behavior when settling into 35 MPH zones. It is a tame fella that knows when to show its teeth and claws upon request.

I recall talking a lot about the Drive Mode know and how each mode responds to the selected algorithm. A bit of knowledge of when to use Sport S+ instead of Normal mode helps with timespace and location. My usual test loop in the far west metro of the Twin Cities offers a mix of twisty roads and long stretches of tarmac. It can also be full of traffic – in this case, one or two cars or one big farm truck could calm things down.

By the way, I got 19.4 MPG during my time with the RC F. I can handle that…and the required Premium fuel it drinks. 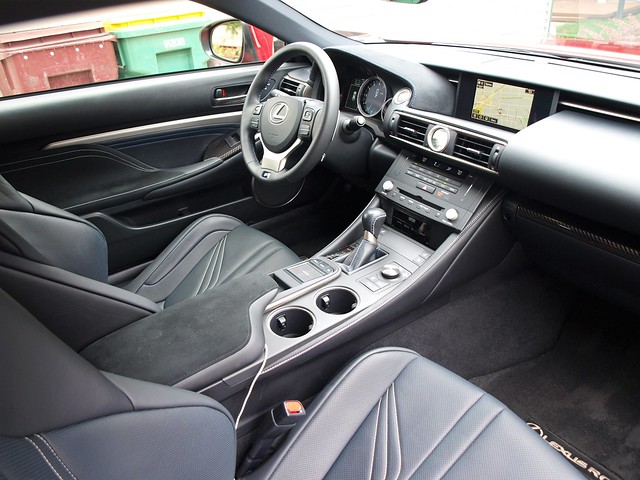 IS THE RC F COMFORTABLE? Before I get into how I feel inside of the RC F, let me point out that there is an Eco light that pops up on the big TFT dial while driving in Normal mode. Two things about that: Why does it have one in the first place and we're not talking about that here…

When I first sat in an RC F, I was worried about the racing-type seats. In the end, I found that it will envelop the driver with support and comfort. It still does that for me. The seats are designed to lock you in wherever you go.

While detractors like to knock the design of Lexus instrument panels, I have no problems with them. Over the six years I worked with Lexus automobiles, I am used to them. I am used to the track pad for the infotainment screen, getting to the screen I want for certain functions, setting up the drive mode and Torque Vectoring Differential setting I want for my drive and adjust accordingly. I also like the fact that across multiple screens I can finally get all of the information I crave in other automobiles.

Yet, there are those who love to break down other components of the cabin. For example, the Mark Levinson audio system is fine for my ears. As much as I love proper music playback, I just want to listen…and groove…and switch to the ballgame to cheer my teams on. The Mark Levinson system works fine by me for those points of entertainment.

As far as carrying the things I work with and are close to my heart, it also works for me. The front seats slide when you fold forward the backrests for easy access to the things you put on the rear seats. The trunk lid opens wide and flips up with the hinges inboard for better loading and unloading of things. Like musical instruments, camp chairs, laptops, detailing kit, groceries, luggage…and so forth.

If you buy something, you have to be able to operate it competently with ease. And enjoy what the car as to offer. I think after four stints in an RC F that I have a grasp on how to operate this magnificent beast competently. 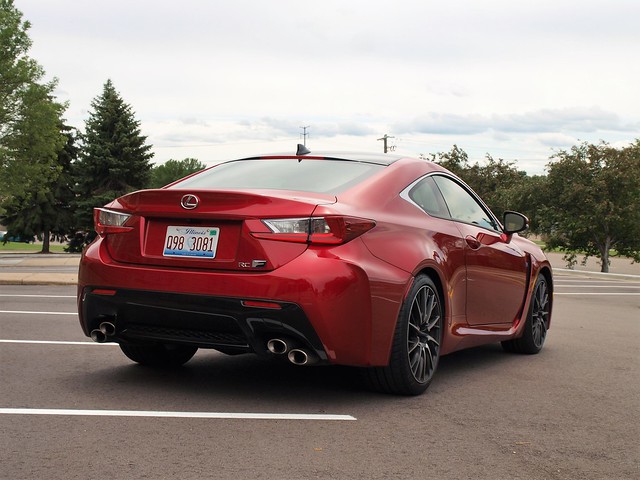 WHY DOES ANYONE JUDGE IT ON LOOKS? My job is to take you beyond your first impression – which is usually the exterior of the vehicle I am working with. I know Lexus had been knocked for its designs since the ES 250 joined the LS 400 in their showrooms. Lexus has tried to give everyone a design language that is easily identifiable and distinctive for customers to embrace as they become owners.

The Spindle Grille is the signature. From there are a series of sharp lines, curves and other contrasting shapes that make up its visual DNA. The RC coupe was designed to be an upmarket sports coupe with grand touring aspirations using these visual cues. The RC F is an extension of the RC's look. It went to the gym, bulked up and is now ready to rock the party.

By its looks, I found its personality. Keep in mind that everyone has its own interpretation of a car's personality based on their life story. In my case, it is a superhero who happens to be mortal. It is your dream significant other who is not stuck up around you – perhaps to others. He's shy, at first. That is until you start up the engine. A bit of a show-off, but he means well.

And, seriously, he is very generous and kind. You just have to know him a bit better. 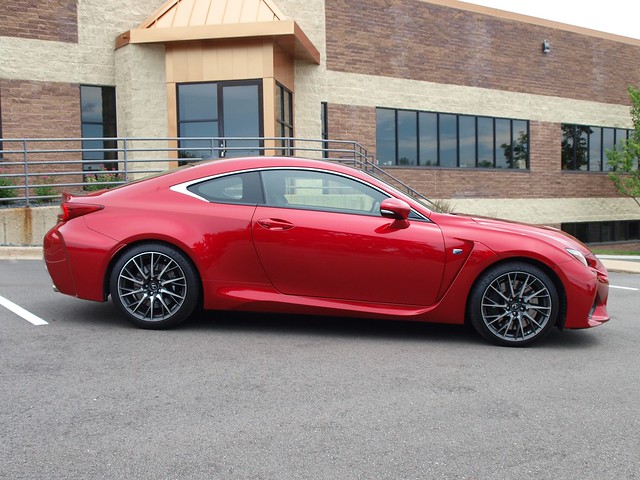 HOW DOES IT DRIVE? Glad you asked. Here's a couple ways to answer that: I could go through the usual car review protocols of taking you through each aspect of its driving dynamics. That you can read elsewhere.

Or…I can throw out all objectivity and cut to the chase. It drives exactly how I want everything else to drive. The RC F is simply balanced for my taste. Not too hard, not too soft. It knows its limits, but rewards you for pushing it to them.

There is something I need to address. You have goaded me to do something stupid with the RC F – like a burnout or drift in it. Why do you want me to shred tires and ruin cars? WHY?!?

I respect the RC F to simply enjoy it. To love it. To take in every mile in it. Sure, I have tracked these cars, but sometimes you don't need a track to experience its balance of superlatives that sums up the driving experience of the Lexus RC F.

Besides, I'm getting old. Some guys my age may want to still hoon their cars. Not I. Not anymore. And, definitely not in a Lexus RC F. Give it some throttle to show its superiority and want to maximum thrust. From there, it's smooth sailing. Not too hard, not too soft – just right. 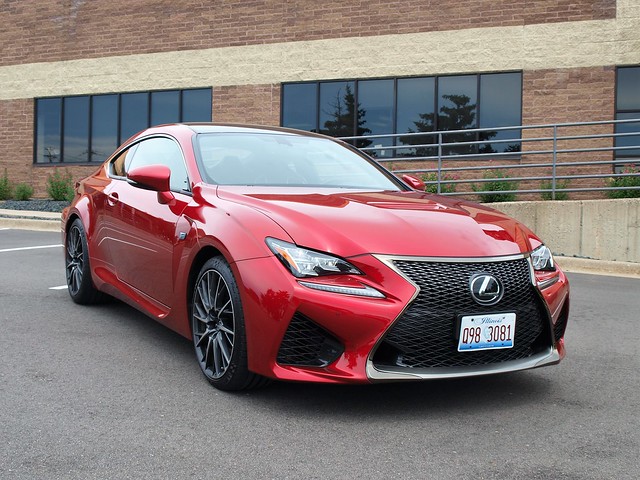 IS IT MY DREAM CAR? What is anyone's dream car, really? When I was a kid, the coupe was still revered by everyone. The formula was enticing – long hood, short deck, and/or a swooping fastback roof. In my day, it signified seven different automobiles: the Jaguar E-Type, the Datsun 240Z, the Dodge Challenger/Plymouth Barracuda, the Ford Mustang and the Chevrolet Camaro/Pontiac Firebird. By 1970, my idea of a dream car started to take shape.

I see the RC F as a combination of all of the above. It is as Lexus took everything from those seven automobiles and reimagined them in a luxury performance coupe. While the design and performance and evocative of these influential coupes, there is plenty of today's technology that keeps it safe, secure and performing at the highest level.

However, the RC F is not entirely perfect. Nor should I expect perfection from any car, truck, SUV, minivan or any vehicle at any rate. Now, I live in Minnesota and we have a thing called winter. Unlike most places in the USA, winter here can be a double whammy of snow, ice and subzero temperatures. Unless I spend extra money on high performance winter tires and learn to properly and safely drive a 467 horsepower rear-drive car on ice…it will always remain a Spring-to-Fall car for us Northern Climate denizens.

As for the price, well…$80,839 for this Infrared example with several packages and options may seem right for what I expect from an RC F. The big thing for me would be to have the Torque Vectoring Differential as equipped on the car. In order for me to have that feature, I would have to take the rest of the Performance Package – including the carbon fiber finished roof and rear wing. That alone is $5,500. I have to admit that it looks awesome in Infrared and Molten. Ultrasonic Blue….maybe. 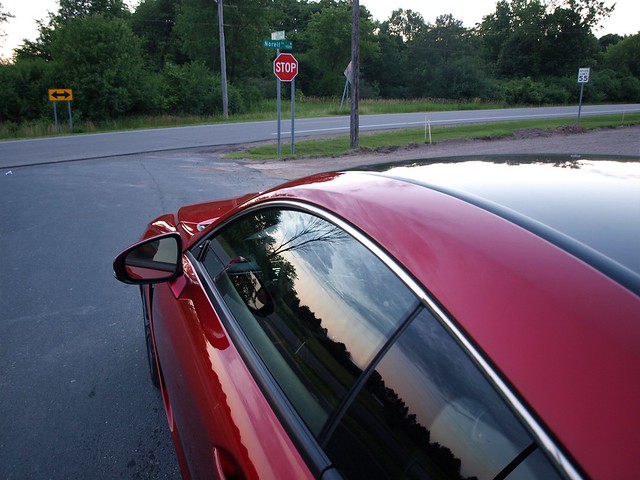 No matter how it is equipped or the final price of this car, the Lexus RC F remains one of my favorite cars to work with. It is a car I love engaging people with. But, it is also a car I love driving – with its balance of aggression and civility.

So, yes, the Lexus RC F still does something for me. It puts a smile on my face. I've fallen in love with it again. Full stop.