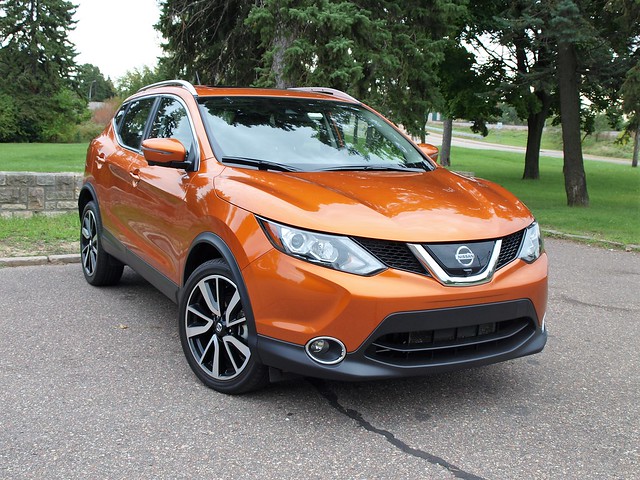 A Victory & Reseda review of the 2017 Nissan Rogue Sport

Over a year ago, Nissan pronounced the 2017 model year as the "year of the truck." It has been quite a good year for Nissan with SUVs and trucks up 14.9 percent for the first nine months of the calendar year. It helps to present marked improvements across the line, with the addition of the Armada and the Titan half-ton pickup to the lineup.

There was one more product Nissan wanted to introduce during this model year. It could possibly be the most important piece to the lineup – not that every model is equally important.

What Nissan needed was a proper small SUV to slot underneath the popular Rogue. They did not have to look far since it was already one of the most popular models in their global portfolio.

In those markets where it is hugely popular, the small SUV is called Qashqai. It is a Farsi name of the people who live in the mountains of Southwestern Iran. Given the nature of the name, and the fact that average American may butcher said nomenclature (repeat after me: cash-kai – see, it's easy to pronounce!) or call for a political action on Nissan's Franklin, Tennessee headquarters campus – it is called Rogue Sport for our consumption.

Before I dive into the vehicle itself, I have a kvetch to make. The word "Sport" is truly overused in the lexicon of automotive model nomenclatures. It;s not Nissan's fault, but of its many competitors across the industry. To name a trim name called "Sport" denotes a sporty model that offers exciting trim that attracts enthusiasts and, maybe, an engine that brings the "wow" factor to that model.

However, we are seeing an overuse of the word "Sport" to denote a model that is smaller than the main product it sells. Hyundai uses it for their Santa Fe SUVs. Land Rover and Range Rover also use said word for some of their models. Now, Nissan.

And, it's not just automobiles this word is being overused. There are cologne and chocolates…and clothing…and so on. 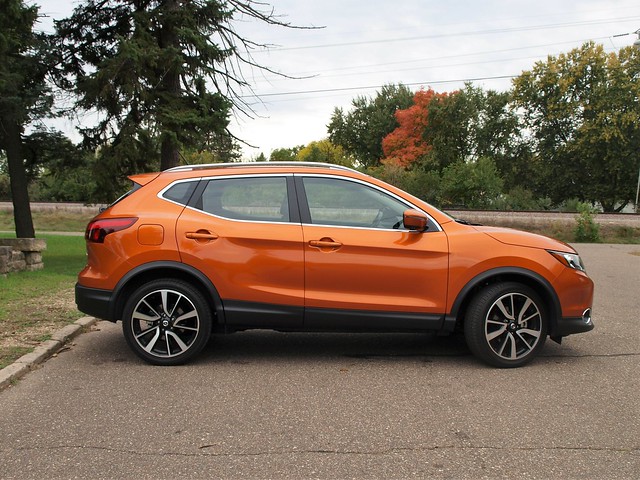 Before I go any further down this rabbit hole of kvetching about nomenclatures and branding, we should talk about the 2017 Nissan Rogue Sport.

Regardless of what I think about the name of this vehicle – it's pretty damn good. Let me explain…

As with all of my reviews, I will start with the exterior. It's really a handsome vehicle. The lines follow a familiar shape, though more concentrated for the Rogue Sport. It does look like the larger Rogue from almost every angle, which justifies the name for this market. I do like how the signature "V" trimming anchors the front end, with the LED running lights framing the headlamp units. The fog lamps are nestled in the chrome outlets in the corners of the lower front fascia.

The rest of the Rogue Sport is really handsome. Having a concentrated look does help with its profile, lending to a fastback shape into the tailgate area. The 7.4-inch ground clearance also helps in framing the profile for a highly functional and fun SUV. 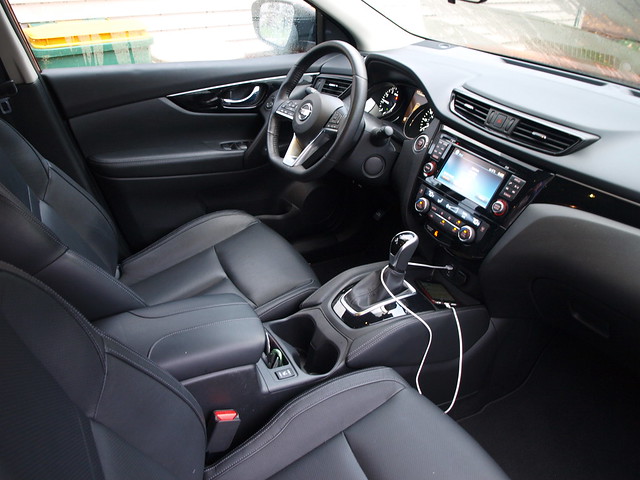 There are a couple of drawbacks. One is the NissanConnect infotainment system. We all wished that it would have Apple CarPlay and Android Auto compatibility, but it does play music files fine. Though I wished it would play them cleanly – either via Bluetooth or the USB connection. I also wished the steering wheel rim was thicker. At this point, I'm being nitpicky…

The rest of the cabin is fantastic. The seats are well-sized with plenty of support, bolstering, and adjustments. I also like the quality of leather used for such a highly functional small SUV. The front room is superb, even with the moonroof above the front occupants. The room in the second-row is better suited for average-sized adults and children. Cargo space is generous, with 19.9 cubic feet with the second row up, 53.3 cubic feet with the seats down. My tester came with a cargo cover for privacy that is very easy to remove when more space is needed. 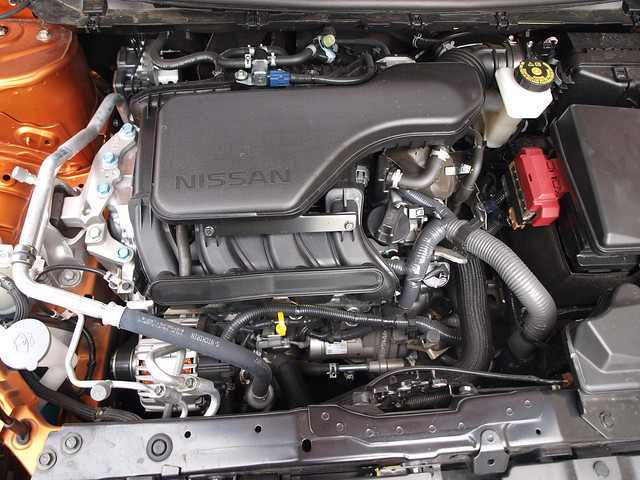 Under the hood, the Rogue Sport came with the 2.0-liter four-cylinder engine found on the Sentra sedan. With 141 horsepower on tap, the torque number went up to 147 for better low-end performance in assisting traction. The engine felt more than willing to run with traffic on the highway and across town. The Xtronic continuously variable transmission behaved much better than before with this engine. On my tester, I had Nissan's all-wheel-drive system on board.

While it exhibited plenty of fun at every turn, it turned decent fuel economy. I averaged 26.1 MPG in my care, which is almost average for this model.

One does not expect it to carve corners in the Rogue Sport. You get a very absorbent ride that allows the suspension system to handle all road imperfections, such as bumps and dips. In all, the ride quality is quite good. Handling can be soft, but the Rogue Sport offers plenty of control through the turns. The steering is pretty quick at the wheel, offering a solid turning radius and good feel on the road. The brakes are fantastic. Not just with great pedal feel, but with solid stops in normal and panic situations. 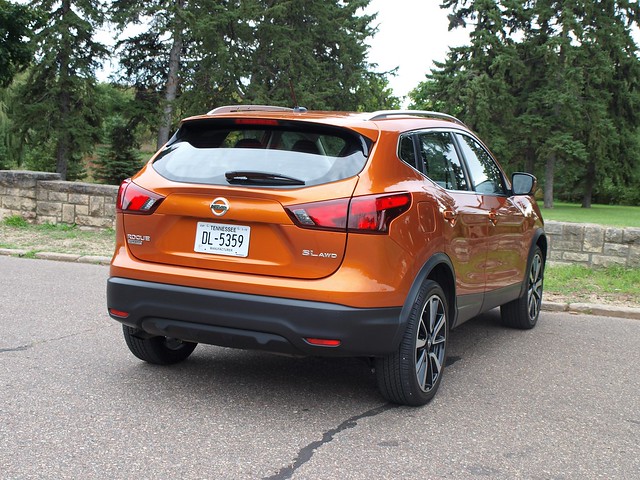 The question here should not be "which Rogue should you get.” Both SUVs named Rogue can stand on their own, in relation to their competitive sets. The larger Rogue offers a third-row option, with all of the standard tenets of the compact SUV market. Some have chosen the larger Rogue with the Toyota RAV4 and Honda CR-V on their shopping list. The smaller Rogue Sport is in direct competition with the Jeep Compass. Both offer their own competitive advantages, but it all comes down to execution.

The Nissan Rogue Sport wins on the basis of interior quality, a cleaner design, and a willing standard driveline. It also matches well with each Compass trim level, save for the Trailhawk. Still, the Rogue Sport is a fine urban adventurer that can find itself going on a trip when it is asked to do so.

If you must have anything smaller than a Rogue, CR-V, RAV4, CX-5, Escape and so forth – the Nissan Rogue Sport is a good place to start. It may make you forget about what you would call it.