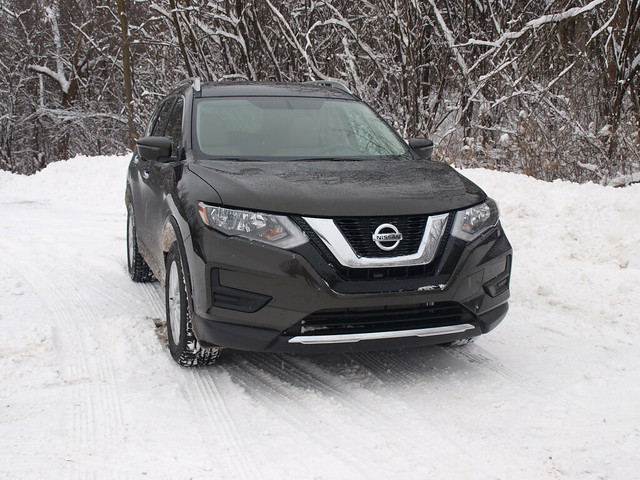 A Victory & Reseda review of the 2017 Nissan Rogue

Yes, I will admit I went a bit overboard on talking about the Nissan-Lucasfilm-Disney-Star Wars marketing tie-up in my Los Angeles Auto Show piece.

Let me explain. I'm not usually comfortable with such marketing tie-ups. If it is beneficial for all parties involved in the deal, then it works fine. Nissan's justification was indeed acceptable – a cultural fixture that embraces America’s love for Science Fiction that was highly executed in an excellent manner by George Lucas and company.

In retrospect, I saw the first and second installments of the "Star Wars" franchise at the movie theater. I thought the first one – Episode Four, to the fans – was well done. I have not continued being a fan of the franchise because Science Fiction wasn’t my thing. Although, I do love "The Fifth Element." Does that count?

For the "Star Wars" story "Rogue One," Nissan, Lucasfilm and Disney all agreed to have a special edition of the company's best-selling vehicle – of the same name. You get the badging and Easter Eggs that are aligned with the movie franchise. Original buyers also get a replica Stormtrooper helmet.

The bottom line is that all of this does not entirely interest me. The fact is that Nissan's best-selling vehicle got an update as part of the "Year of The Truck." The 2017 Rogue SUV received a new grille, nose, rear taillights and other interior updates. 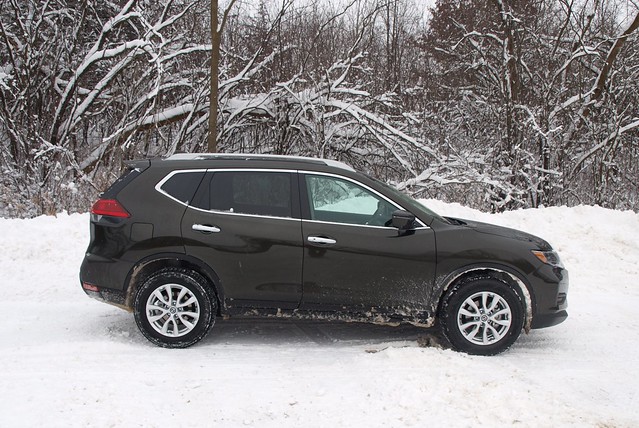 The thing about the Nissan Rogue is its position in the automotive universe. SUVs are big now. They are driving the market. More so are "compact" SUVs and crossovers, as they have simply taken over as the preferred vehicle for the same customers of mid-sized sedans. These vehicles are now common at school waiting areas, shopping malls, industrial parks, sporting venues and everywhere else you find humans milling about on this Earth.

This brought up an argument, as a result of a question. It is perhaps one of the toughest questions I hate answering. Simply put, which one of these highly popular conveyances would I choose – if it were my money?

I am single man. There is no spouse, children or pets in my life. I do not transport others either in a commute or when I’m out and about on the weekends. I also like a bit more style, luxury and amenities in my vehicle. I also like a lot of power…then again, you've seen what I prefer to work with in this business?

Obviously, a compact SUV will not cut the mustard for me. Not even one with a premium badge.

Not so fast, champ! The question must be answered. I have a 2017 Nissan Rogue to work with. I just need to make sure that someone in a Stromtrooper suit doesn’t make me watch the "Star Wars Christmas Special."

First things first, let's get some facts out of the way. The updated 2017 Nissan Rogue I received was the SV model with all-wheel drive and Premium Package upgrade. It is in Midnight Jade with an Almond cloth interior – a lovely combination, if you ask me.

Therefore, this is not the Rogue One edition. If you were hoping I'd work with one, you can stop reading here.

However, "Star Wars" fans will certainly appreciate Nissan's execution of their Rogue. They should also be appreciative that the Rogue has become the top selling product in Nissan’s USA lineup and there are three plants working very hard to get their favorite X-Wing SUV to them – even if they did not order the Rogue One edition.

These fans will enjoy the solid ride/handling mix – all just fine for SUV duty. The steering is quite good, helped by the new steering wheel and a better response from the system downstream. Brakes are also good, too. Expect solid stops in normal and panic situations.

Star Wars fans might also be interested in the technology on board the Rogue. On the SV, there is a touchscreen system powered by NissanConnect. However, this system is already a generation old with adequate connectivity via Bluetooth, a semi-intuitive interface and a really decent navigation system. I was hoping they would have upgraded to the newer interface seen on the updated 2017 Pathfinder, but that's just me… 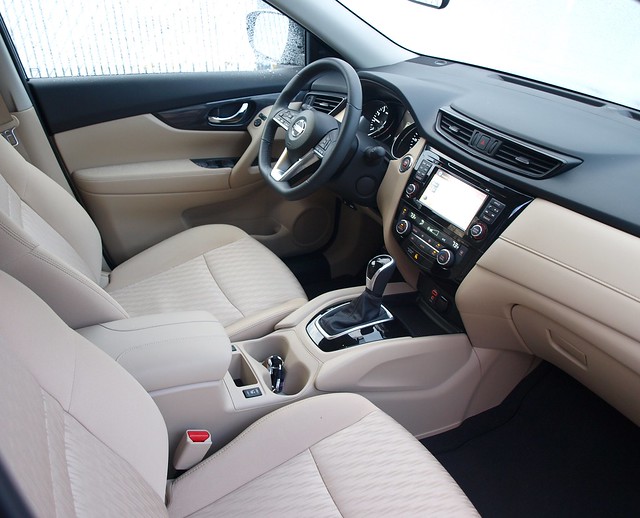 Star Wars fans are not the only marketing target for the Rogue. There's college football fans with Nissan's "Heisman House" adverts and sponsorship of college football’s biggest individual honor. Come to think about it, the Rogue makes a great tailgate companion. Its liftgate opens high with great access to 39.3 cubic feet of space behind the rear seat for coolers of adult beverages and food, additional shopping bags of food and condiments, folding chairs and fan paraphernalia.

If it just you and someone else, you most likely have the rear seat down. That means you can carry good tailgating items up to 70.0 cubic feet. There is also a compartment behind the tailgate where you can hide stuff below the floor level, which also serves as a divider for items that need more special attention – like groceries. Nissan calls this Divide-and-Hide. That might also describe some of the teams that did not get bowl game invitations recently.

We can establish that the 2017 Nissan Rogue makes a great vehicle for Star Wars fans and college football fans alike. What about "my people?"

First off, I have two sets of people – some even find themselves in the middle of a Venn Diagram. For one, I am a part of the local enthusiast community – the old guy among young fellas with various rides and ideals. I appreciate the support and partnership that I have with Minnesota Nissan Infiniti (MNNI) and always find their annual big events great to attend and exhibit. 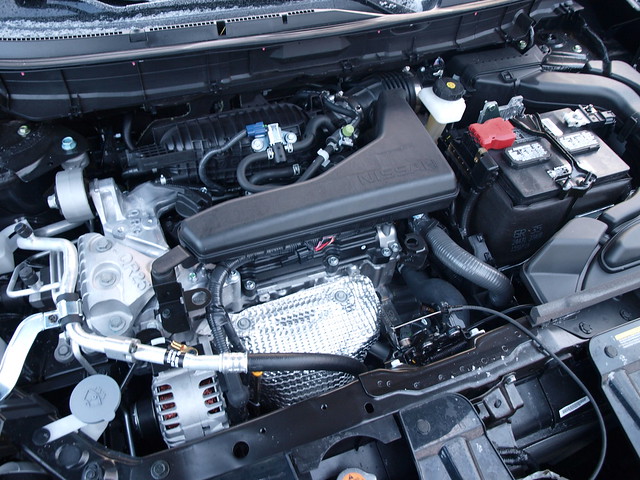 For the enthusiasts, they might be OK with the 2.5 liter four-cylinder engine under the hood. It is a lively engine with 170 horsepower on tap. It is also connected to the XTronic continuously variable transmission and its all-wheel drive system. The complete drive package is a proven one that does the job getting through tough commutes and weekend getaways.

However, enthusiasts and average drivers alike must face the four seasons, even when it serves up a mess. The week I had the Rogue SV, Minnesota decided it was time for winter. While temperatures dropped, 3-5 inches of snow also fell. The latter made for interesting driving. While this tester was equipped with intuitive all-wheel drive, I found problems with traction and stability with the all-season tires installed on it. Even when I needed the 4WD Lock to work in several occasions, the system shut itself off rather quickly. It was quite an adventure with road conditions less than ideal.

The Rogue would normally return decent fuel economy. As the temperatures dropped and the snow came on, I averaged for fuel economy in this Rogue SV 21.1 MPG. Earlier versions of this same generation Rogue have averaged 24.2-27.0 MPG in V&R's tests.

For my LGBT people, we should be happy that Nissan received a perfect score in the Human Rights Campaign's Corporate Equality Index. Not that everyone supports the HRC, but knowing that Nissan loves us back – especially their sponsorship of the Gay Softball World Series and other events Nissan is involved with – is good enough to consider the Rogue above all others in its class. 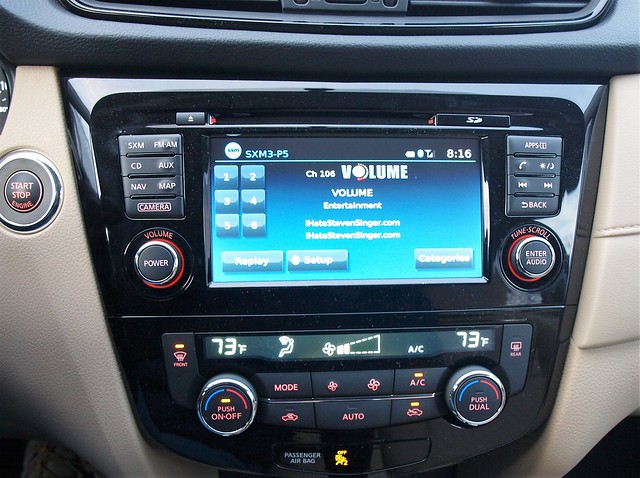 Inside the Venn Diagram are the people I appreciate the most – the select dozens of gay auto enthusiasts who have become friends and acquaintances along the way. Our love for the automobile is not on a singular wavelength. There are those who might appreciate the Rogue's utility, comfort and drivability. Though I think we might all like the new flat-bottomed steering wheel with improved switches and slimmer center cap. The gear selector is all new with a sportier feel and better gating to do manual shifts. Even for the middle-of-the-road Rogue, there are some sporty bits that should things a bit more…"funner."

Yet, we also might consider the philanthropic side of our lives. The Rogue is perfect for canned food runs for the hunger drive, delivering gift packages to families for the holidays and helping out getting items to support a Habitat for Humanity build. Recently, Nissan asked some of my colleagues in the automotive media to help build a home for Habitat for Humanity in Nashville. (For the record, I was invited, but I was unable to accept due to health issues) When we are asked to do some good, we will come and take up tools and put wood to frame. Our build was fantastic, thanks to my colleagues that lent their help in doing so.

Being philanthropic also means finding greater value in everything. The 2017 Nissan Rogue is no exception. The base Rogue S model with front-wheel drive is priced from $23,820. This SV tester with AWD and the Premium Package came to $29,095.

This is not your typical review, but it tells a greater story. No one ever thought to see the day when the Rogue SUV would become the sales leader for all of Nissan in the USA. As of the November 2016 sales results, the Rogue is on target to accomplish brand and group sales leadership for the entire calendar year. 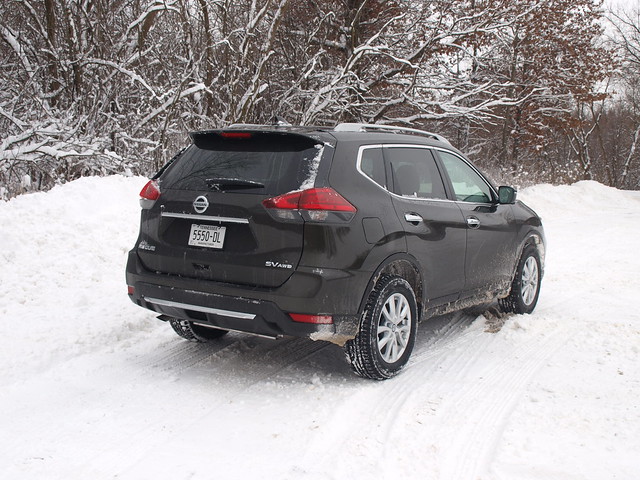 The Rogue's success is based on a two simple facts: It is an attractive package for everyone and it executes what it does very well. In a market segment where taking the middle ground is favored over the superlatives, it seems that anyone who bought a Honda CR-V or Toyota RAV4 may have missed the point of this Nissan Rogue. It is not about the middle road that will create long term relationships with families, it is how to elevate the middle ground by continuously engaging with the driver and its occupants.