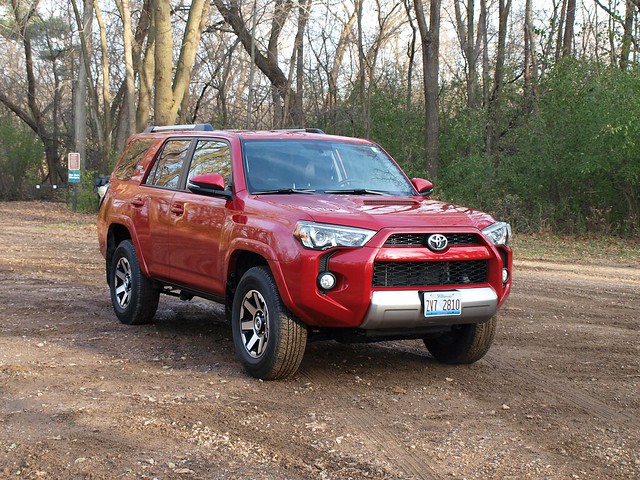 2017 Toyota 4Runner TRD OFf Road – All Photos by Randy Stern

A Victory & Reseda review of the 2017 Toyota 4Runner

Little do I measure the power of what this website could do for you. Yet, I wonder if it actually did for at least one particular vehicle.

What I am referring to was a review I did almost two years ago for a certain very hard to find SUV from Toyota. With that one vehicle, I must have lit a spark under your feet.

The 2015 Toyota 4Runner TRD Pro piqued your interest. You even bought them – not exact a TRD Pro, but a 4Runner nonetheless. The last Polar Run rally saw a few 4Runners – including one its organizers who have since made his "burrito" into a paean to Ivan "Ironman" Stewart, right down to the 1980s factory team livery striping.

Perhaps it is no coincidence that this has become one of the hottest vehicles in Toyota's lineup this year. So far in 2017, the 4Runner saw a 15.7% jump in sales over the same 10-month period in 2016. It ranks third behind the RAV4 and Highlander in year-to-year growth in all of Toyota in the USA. In October 2017 alone, it saw the highest jump of any single Toyota model sold across the USA of 35.7% over the same period in 2016.

It could be that there is a market for a real, honest-to-goodness four-wheel drive SUV that can do anything, go anywhere and offers no apologies. This is how you exactly describe the Toyota 4Runner.

For the uninitiated, the 4Runner is built off of a global truck platform that underpins several products, such as the Hilux, Tacoma, and Lexus GX/Land Cruiser Prado. Its heritage goes back to the 1980s as based off of the Hilux pickup with a solid body running down its sturdy frame, which had a top that would be removable. 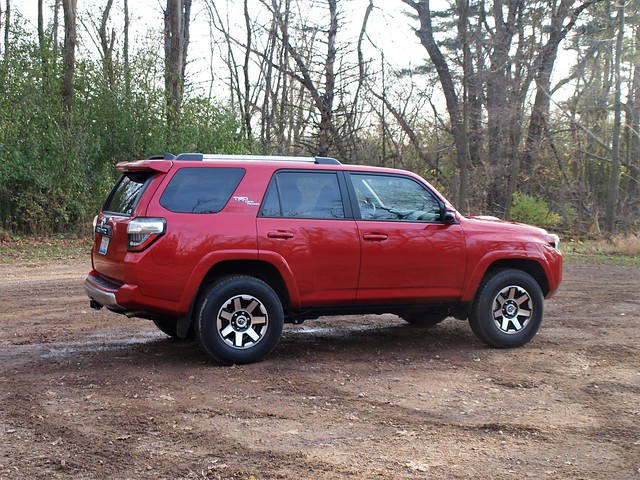 However, the basics of the 4Runner's four-wheel drive system are easily traced back to the beginning of the Land Cruiser – spanning back to 1951. The two-speed transfer case system is the heart of the 4Runner, along with the plethora of technological pieces in addition to its basic four-wheel-drive system, such as Active Traction Control, the Kinetic Dynamic Suspension System, locking rear differential, multi-terrain select, Crawl Control, and so forth.

Power comes from a 4.0-liter V6 that puts down 270 horsepower and 278 pound-feet of torque. Before it gets to the transfer case and both front and rear axles, a 5-speed automatic transmission handles everything to keep this SUV going. If all of this sounds like an old-school SUV, it is. Even with the electronic aids listed above, the 4Runner is made to handle its business on any terrain in any condition.

Unlike some other hardcore SUVs – whom shall remain nameless at this point – the 4Runner has a fully enclosed body on a very tough frame with a large cabin for five-to-seven people and their stuff. From the bottom of the frame to the ground, there are 9.6 inches of clearance to handle uneven surfaces and to drove over unplowed sections of snow-covered highways and streets.

This is actually my third 4Runner, and it is a sweet version. Before the TRD Pro was an SR5 model, which is the starting point of the lineup. This Barcelona Red beast is the 2017 TRD Off Road Premium model – formerly known as the Trail Premium. To describe this trim is to look up briefly at the TRD Pro. Without the hardcore tires, blacked out wheels, the specific TRD suspension system and Bilstein shock absorbers, it would be just a mere 4Runner, right?

Wrong! The TRD Off Road offers its own "rough, rugged and raw" experience. 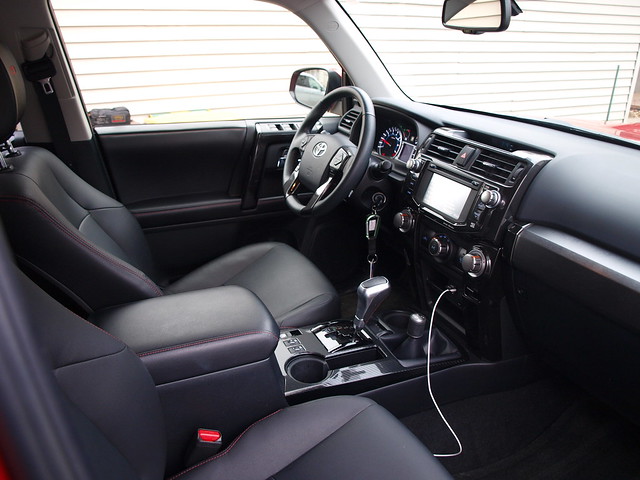 It is obvious that the TRD Off Road offers the kind of urgent sense of adventure as in the TRD Pro, but an expanded color choice, satin finished alloy wheels, a plate at the bottom of the end chin and other badges make the 4Runner a stand out that will look for trouble in its wake. This is what makes a 4Runner – the invitation for all drivers to explore the landscape unlike most SUVs in its price class.

Another key element to the 4Runner TRD Off Road is its tactile nature. This is present in the knobs controlling the climate control, the audio system and other controls for the four-wheel drive system. The shifter is like a joystick, but be aware you are not driving the 4Runner in a video game. This TRD shifter is one of the things I love about this model.

Look just right of the shifter and you will see a real transfer case gear lever. The one where one touch will make feel its pulse. This is not a knob you turn for a certain terrain setting – that is one of the two knobs on the edge of the headliner. Before you even consider turning that knob, engage the transfer case with that lever. Now, you're in control of the elements! You might as well just push the differential lock switch while you're at it.

Just like a lot of the 4Runners I have driven or been in, there is still the nice SofTex upholstery that feels like a softer hide of leather. My tester came with a stark black finish, offset with red stitching and TRD logos on the front headrest. This might not be everyone's idea of “roughing it,” but I prefer this actually. The chairs are plenty big and commanding over muddy tracks and snowy side roads. Rear seat room is superb, so five of us can have the same adventure – even if it was to a Micro Center or Best Buy. 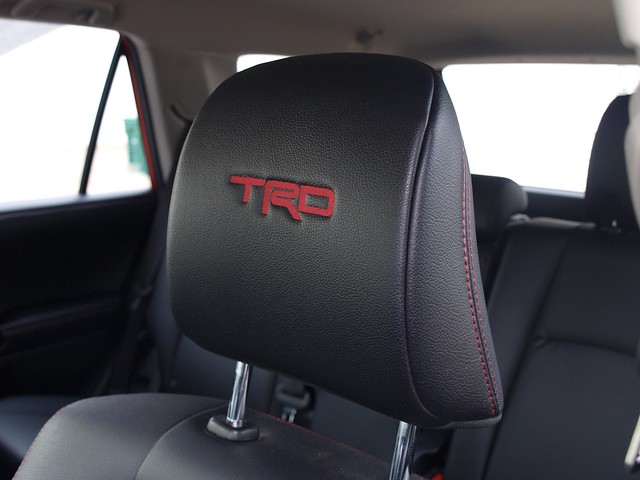 The problem with SUVs with true off-road capabilities is that they are never used as intended. They troll shopping malls, coffeehouses, and office parks. You can commute in a 4Runner, but there will be a time when you may have forgotten what the two knobs/buttons are above the rearview mirror or the transfer case lever on the console. You might even forget there's a universe outside of suburbia – a land of gravel roads and marked trails. If you remember such things, then you'll enjoy the soft ride of a 4Runner TRD Off Road. A bit of an incentive here to go somewhere outside of your comfort zone.

The reason why you buy a Toyota 4Runner is that you want to have the capability of doing something fun over the weekend. Remember fun? Fun, as in encountering a bear in the woods, getting a better place to go fishing, taking a few friends or your spouse to a spot no one knows about – except maybe the sheriff or the park ranger.

Meanwhile, and in case you're wondering, I averaged 17.8 MPG in this 4Runner TRD Off Road. Not that it's important, but…

Let me get you back to reality for a moment. How much does one pay for such a combination of rough, rugged and raw with a few nice things on board? The 2017 4Runner TRD Off Road Premium tester in Barcelona Red I worked with came with a sticker price of $39,835. 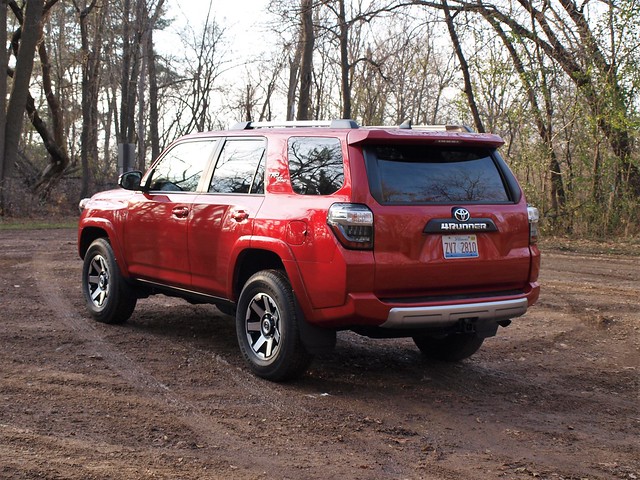 Fun…this is what you will get out of the Toyota 4Runner. Not many vehicles can say that these days. We often find ourselves inside of a cocoon of normality – commuting, shopping, the school run, and so forth. Why not live a little?