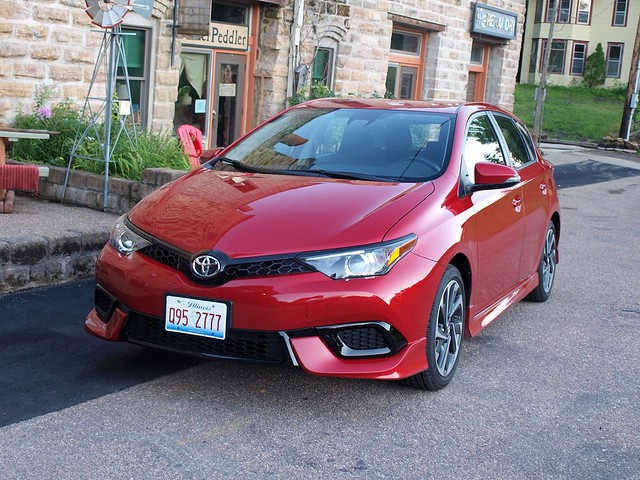 A Victory & Reseda review of the 2017 Toyota Corolla iM

That's pretty much about it. Last September, Toyota did exactly that. They removed the Scion badge to fold its three remaining models into the Toyota fold. Therefore the lineup looks like they were ripe for the youth market, which Toyota had in some form or another.

The FR-S became the Toyota 86, giving them their first sports coupe in a long time. The Yaris iA was seen as the best subcompact car sold in this country and is seen as the best value in the marketplace – period.

The Corolla iM is a different story. Aside from being an addition to one of the more popular models inside Toyota's showroom, it has not caught on as an integral part of the Corolla lineup. The numbers tell the story. Out of 28,333 Corollas sold in July of 2017, only 1,733 of them were the iM.

This is interesting because everyone was lauding the return of the hatchback to the compact segment. Chevrolet added the Cruze hatchback to its lineup. Mazda sells the 3 with a strong emphasis on the hatchback. Honda added the British-made Civic hatchback to the lineup with a carrot at the end of their stick called the Type R. Ford sells their Focus hatches well, driven by the ST and RS models. Subaru introduced their new Impreza with a hatch model, with the new Crosstrek joining the lineup just now. Then, there's the venerable Volkswagen Golf. It is no longer sold solely as a hatchback, thanks to the addition of the SportWagen and its off-road companion, the Alltrack.

These are great news for those looking for more practicality in their small cars. The truth is that only a fraction of compact car sales was of hatchbacks. Not to mention that nagging rise in crossover/SUV sales that has tilted the passenger car market for the past few years. That fraction depends on two factors – marketing and production.

In the case of the Toyota Corolla iM, one was hoping it would make a bigger splash than it did under the Scion brand. Well…not exactly. 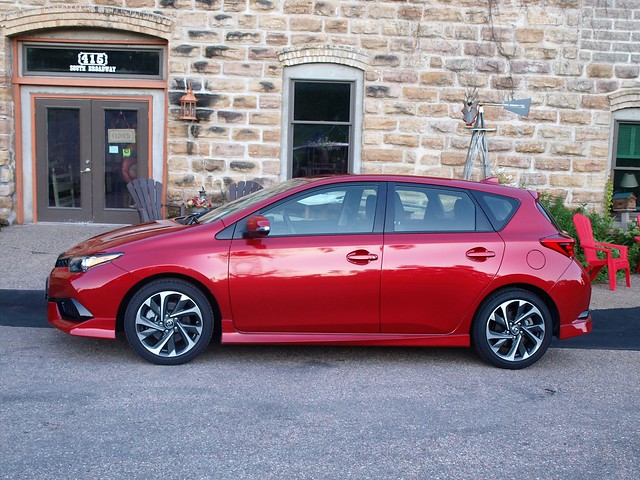 Part of it was the transition from Scion to Toyota for this model. If you picked up a Corolla brochure, you will see that the iM does not appear in it. You have to pick up a smaller folder that has the iM model itself. The other part is that all iMs are built in Japan. Toyota made it clear that they want to sell most of their products by producing them in North America. I wonder if that was a factor to allow a small fraction of iMs available for 2017? Or, rather, some other factor that is based solely on rumors and conjecture…

One point I made when I had the Scion iM last year was that it is sold as a Corolla in many parts of the planet. Though it is sold as an Auris in places, such as Britain, the Australians sell the hatchback as a Corolla Hatch. South Africans can choose between two generations of Corollas with the Auris sold alongside it. Then, there are places where the sedan is the only Corolla sold in that market.

Reminds me of a hit from the C&C Music Factory…"Things That Make You Go Hmmm."

All I know is one thing: I loved it when it was a Scion. I wanted to see if the transition to Toyota will help its cause. So, I got another one – with the Toyota badge, warranty and so forth. 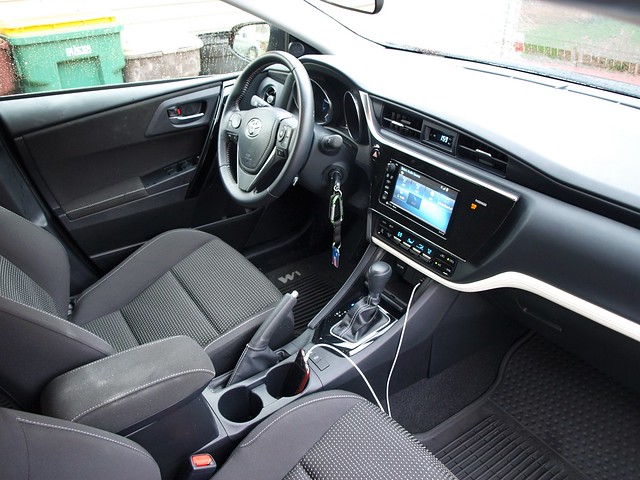 One thing I noticed in the transition from Scion to Toyota is the addition of the Toyota Safety Sense-C driver's assistance suite to this car. This standard package includes a Pre-Collision system, Lane Departure Alert, and Automatic High Beams.

Interestingly enough, I had a friend of a friend show me the set-up of the radar/camera package positioned in front of the rearview mirror. The workings of it are astounding as to package it so well in this Corolla iM, to know which one is the receptor and the other being the transmitter. The things you still learn in this business makes me still feel young.

For the actual driving impressions, nothing has changed. It is a fun car to drive. In fact, it is the most fun you can have in a Corolla. It rides and handles well, offers good braking and sharper steering. The Corolla iM has to be the most fun one can have in the name of a Corolla.

To explain this, one has to go back into history – again. This serves as a reminder how much we miss the AE86 coupes – well, all of the Corolla coupes and Liftbacks from back in the day. It also reminds me of the FX16 again. The 1980s was a great time for Corolla and the iM simply brings back some of that feeling. 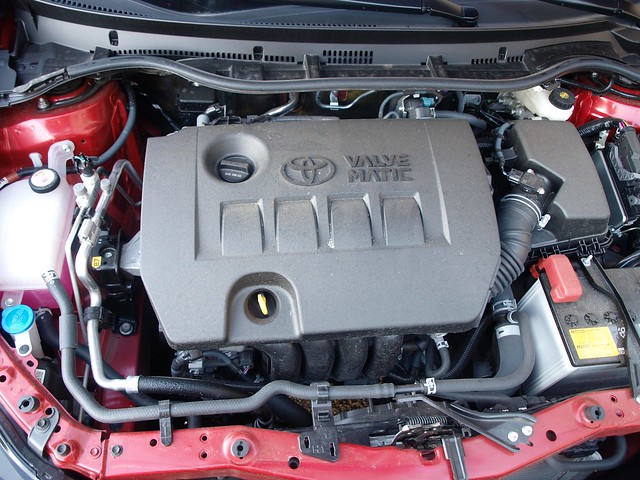 Yet, the 137-horsepower 1.8 liter Valvematic four-cylinder engine delivered the goods nicely. Though, I wished the Continuously Variable Transmission would have better ratio transitions without resorting to the manual part of the gear lever to force them upward. Otherwise, this combination turned in an average of 33.9 MPG. That's pretty good, in my book.

The interior is comfortable with very supportive cloth seats. I can sink in and drive for hours with minimal fatigue. The instrumentation is on point, as is the information screen. The 7-inch touchscreen audio system was sufficient with six speakers. You can get an upgrade with integrated navigation, but you cannot get SiriusXM with any of these two audio options. Also, neither of them are connectable to the Entune app. Perhaps we'll see those two in due time…

Then, there's the exterior. It is such a sharp looking car. The additional aero kit on the lower part of the body makes it more aggressive – a dimension I appreciate in the Corolla iM. All four doors open wide and the hatchback lifts high for greater access and loading.

The other good news is the price. You get a well-equipped, comfortable solid driving hatchback for a complete sticker price of $20,355.

No matter what you call it – or which badge is on one – the Toyota Corolla iM is a wonderful car. Yet, it is very underrated. It lacks a lot of marketing for it. Honestly, there should really be more than 1,700 sold every month – more like 5,000….maybe 7,000. 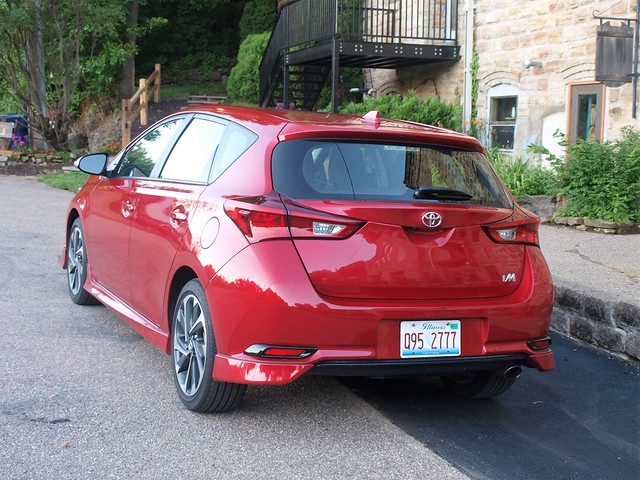 I see a lot of potential for the Corolla iM in this country. It is a cool car, but a lot of people might not see it that way because it now has the Corolla name attached to it. Yet, I had a thought…

It made me think for a moment as to what would make the iM really cool with the car crowd. Being badged as a Toyota, the lid is really off as to what one can do to a Corolla iM using a combination of Toyota Racing Development and third party parts and performance mods.

For months, I pondered a fantasy project for V&R. A car that speaks to this site and the brand, as well as participating in some of the driving events held in our home region of the Upper Midwest. Considering the price and the potential of this car – a Toyota Corolla iM with a few key mods from TRD and other performance parts suppliers would be a great project to undertake…sometime.

There would be a few goals for this fantasy project. One is to find a way to get the 2ZR-FAE engine to have the same performance behavior as the legendary 4A-GE mill found in the AE86 coupe and FX16. In modern terms, the horsepower goal would be around 180. The other thing I would do is to find a geared transmission to supplant the CVT. Maybe an Aisin six-speed automatic? I know…it has to fit the engine… 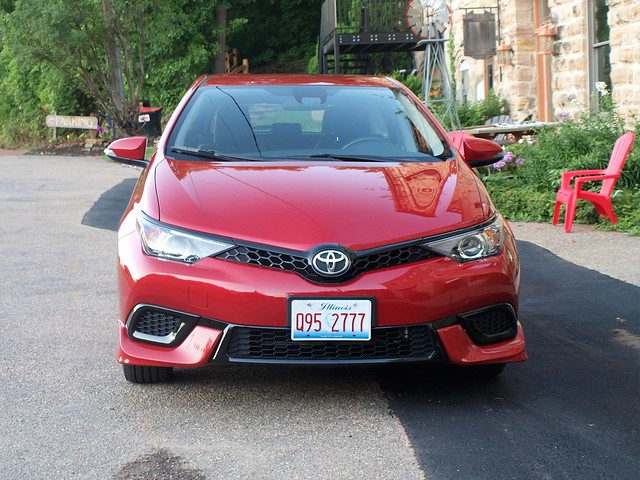 Other mods to do on the fantasy project Corolla iM would be for suspension, two sets of tires – summer and winter performance sets of rubber – beefier brakes with performance calipers and stronger master cylinder…and so on. You can see whether this is going.

This is the point – the Corolla iM is the kind of car one could have fun with. The lid is open. You all need to check it out and see why it is the coolest car on Toyota's sales lot these days.