I was going to do a review of a wonderful premium-branded sports sedan, but things did not turn out the way it was supposed to end.

The car in question was a 2018 Infiniti Q50 3.0t Sport AWD. I have been waiting to work with an Infiniti for quite some time. It was on my schedule – set for delivery on my birthday. The Graphite Shadow sedan looked stunning – setting off the lines extremely well.

Equally stunning was the Graphite leather interior. I liked the changes they did in the midcycle refresh for 2018 with new steering wheel controls and better functional performance The seats were fine and took some time to get comfortable. It is normal, really Some of my favorite cars have some interesting cushioning and bolstering that would take a few days to fully adjust. I was really digging the Bose Performance Series audio system with 16 speakers positioned throughout the cabin.

Then, there was the VR 3.0-liter twin-turbocharged V6. It was a major step ahead from the VQ engine family that was installed when the Q50 was first introduced. Attached to a smooth shifting seven-speed automatic transmission and all-wheel drive, the entire 300-horsepower driveline just seemed right for any great drive ahead. I did turn 22.4 MPG in my care. 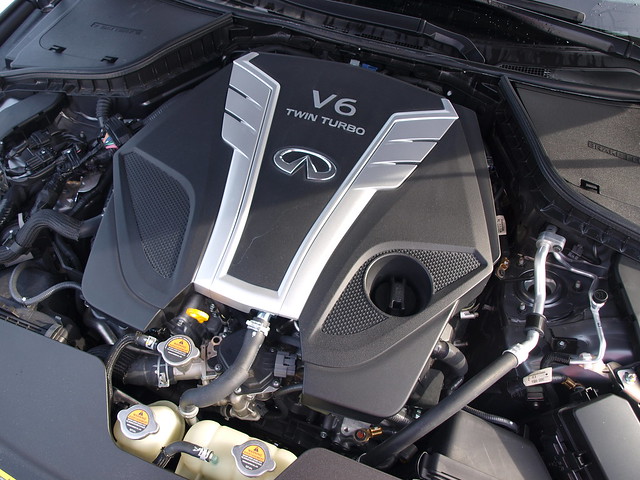 In all, I thought the Q50 was a wonderful car. A great car to drive that is completely fun to run through good roads. My Sport tester came with a $52,410 sticker price.

This is the kind of car you want to celebrate with. Any occasion would do. However, as I mentioned before, things did not turn out as I hoped…

On February 5, I left my house/V&R Headquarters in Robbinsdale, Minnesota just after 5:30 PM to get some dinner. I made my usual exit out of the icy alleyway, turned right onto Parkview to make a U-turn at York Avenue North for a left onto Zenith Avenue North – one my usual ways towards heading anywhere south, west and east.

The roads in my neighborhood were plowed after a citywide Snow Emergency was called after Saturday's snowfall. The one thing I always felt they should do is to treat the roads to help make them melt – especially on moderately trafficked roadways – such as Zenith Avenue North. Two days after the snow, the air temperature was +17 degrees Fahrenheit and the roads were still caked and iced over. Only a few patches of wet tarmac was to be seen, but improved road conditions were ahead into Golden Valley – the other side of 26th Avenue North.

In the middle of the block between 27th and 26th Avenues North, there is a cut in the median for a driveway entrance on the southbound side of Zenith. A B5.5 Volkswagen Passat wagon was waiting to turn into that driveway from the Northbound direction. I saw the front end jut a bit onto my lane.

The only thing to do was to put on the brakes and slow down from 30 MPH. Instead, the Q50 lost traction and the anti-lock brakes did not engage. I was already alert but felt the Q50 lose control. I thought I had enough distance for the ABS and the Forward Emergency Braking to bite down to stop me from making impact. 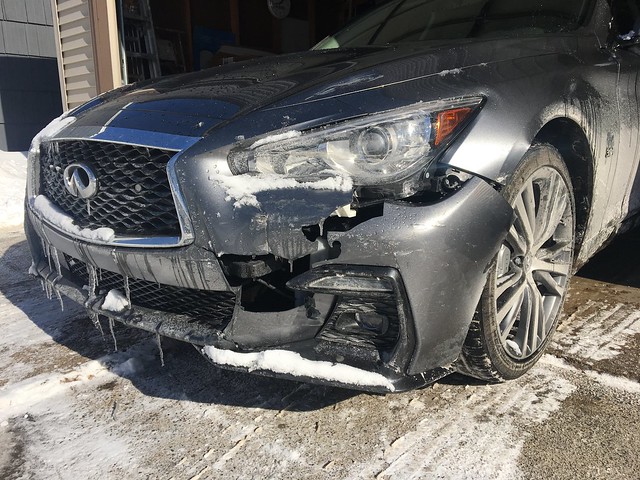 Unfortunately, I made impact. I hit the Passat on the driver side frontal offset and wound up in the snow bank along the curb.

The Passat took the brunt of most of the damage. The front bumper and fascia were dislodged. The other driver said that his radiator was punctured, but we saw a lot of red fluid from the power steering system pour out onto the snow and ice. He also said his serpentine belt was off from the engine. His headlights and parts of his front fascia littered the cut in the median and the southbound side of the road.

Relatively, the Q50 fared better. The driver side bumper skin was dislodged with bents and cuts in it. There was fold on the front driver side fender over the wheel well. I also saw blue fluid pour out of the Infiniti – the windshield washer reservoir was damaged. The car was driveable and made it back the two blocks to home after we exchanged information and reviewed our notes. The other driver was calmer than I was.

Certainly, I was upset. Pissed off. It was not what I wanted to happen. Nor did I want it to happen on the day of my 54th birthday. Yet, I calmed down – the other driver was very calm. We both walked away from the accident without any medical issues – except for my emotional health.

After it was done, I refused to go down the "should've, would've, could've" route emotionally. My roommate assured me that it was only an accident. She gave me permission to use the scanner in her office to get the paperwork over the Infiniti's media fleet management in Chicago. I returned a message from one of my clients. He was concerned my welfare, but we went on to conduct business towards some agreement on concluding a task. The principal of the consulting firm I work with sang "Happy Birthday" badly enough to make me laugh. The president of a car club I'm doing social media for had a phone conversation with towards concluding some tasks for them. 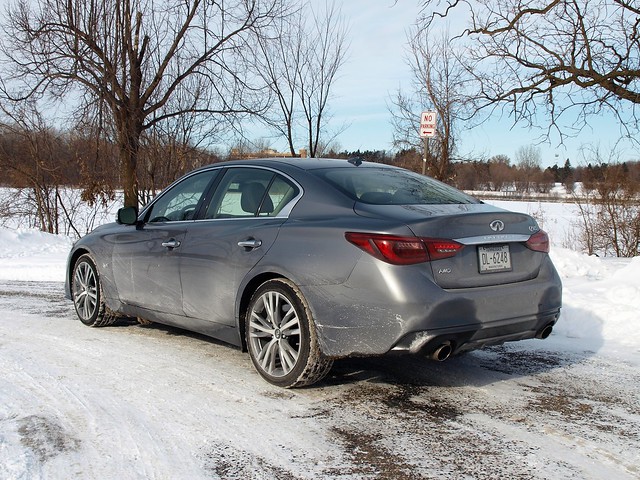 I will admit that I almost lost it when I talked my significant other, who lives near Milwaukee. I could not hold back my emotions, but he lent an ear and help me refocus on things. Sometimes, it takes a village to get me back into a calmer, professional mode.

Why did I go through the motions after this accident? I often talk about winter driving safety with my enthusiast friends. I left like I let them down. I got in a winter accident – and lost.

My winter driving skills were up to par. Perhaps, better than your average California native would fare after a long stint in the Twin Cities. I'm not bragging, but 18 years living in the Upper Midwest – 22 years total in locations where snow is a regular occasion.

Should I be upset that the Anti-Lock Brakes, Predictive Forward Collision Warning and Forward Emergency Braking did not come into play sooner to stop the Q50 before impact? Should I chastise Infiniti for its choice of Dunlop Sport SP 5000 run-flat all-season tires for this climate? On both parts – absolutely not! One cannot blame engineering and technology if the conditions are much less than ideal – in this case, air temperature and icy/caked snow road conditions.

After years of driving and testing vehicles in the winter, I encountered my worst nightmare. You see this play out over-and-over in social media – the complaints of how Minnesota drivers can't drive to save their life. Now, I'm one of those drivers…or, at least that is one perception of what transpired on the afternoon of February 5, 2018. 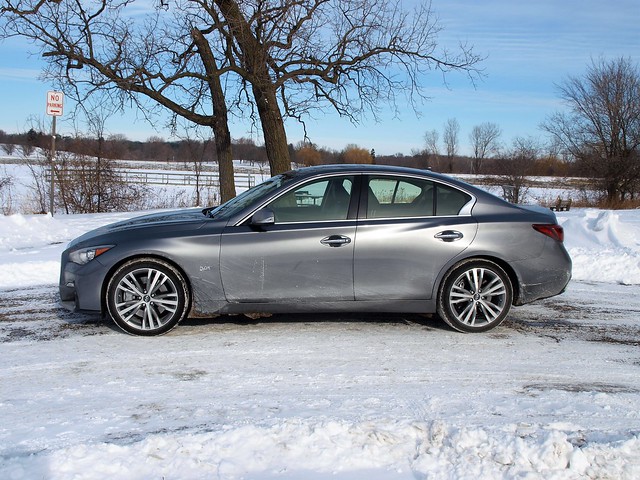 One thing I am grateful for is the support I got from my colleagues, OEM and industry contacts, and you. I was at the point of just exiting the business after this accident. My friends, close colleagues, and my significant other talked me off the ledge.

The bottom line is that accidents do happen, even to the best of us. Being able to walk away from one and talk about it is another reason why I'm here.