A Victory & Reseda review of the 2019 Ford Edge

For years, I have been trying to figure out where the Ford Edge sat within the segments of the SUV market.

It is not a compact SUV since it is too large for the segment. Besides, the Ford Escape resides there. It appears to be a bit small for the mid-sized segment, as the Ford Explorer exemplifies that segment perfectly. It was such an outlier among SUVs that, eventually, other vehicles were designed to compete directly against it.

Being unique helped the Edge's cause since its introduction in 2006. It has always been a two-row SUV that has been right for small families, businesspeople, and folks with active lifestyles. Today, it serves a different function for Ford – a "larger" SUV for the European market. It may have found its niche In Europe. There, the gasoline engines have been swapped out for diesels and there is a manual available, along with a luxury Vignale model. You would also find the Canadian-built Edge in Australia and New Zealand under the Endura name.

For 2019, the second generation Edge receives a mid-cycle refresh. It is not just a new front end and a realignment of engine choices here. It is the addition of Ford Performance's first SUV offering – the Edge ST. Its timing is right since Ford has been pulling back its cars and hatchbacks from USA showrooms. With the absence of the Focus ST (and RS), enthusiasts can now consider the Edge ST as their performance ride.

While the Edge ST rakes in the headlines, most consumers will buy the standard issue models. Families, business people, and active lifestyle enthusiasts would rather have something that is more fuel efficient but offers the same practicality and capability they expect from a Ford Edge. 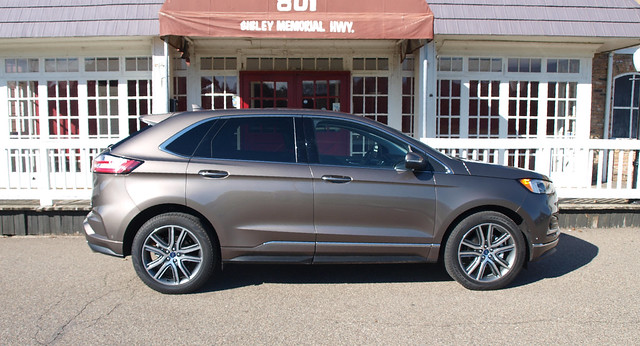 The tester I am working with is the Edge Titanium – the de facto top of the line model. Well…not exactly. There is one step further you can take the luxurious Titanium model – the Titanium Elite.

Two things came to mind when I received this ultra luxurious Edge. One, Ford hasn’t used the name Elite since 1976. Remember when it was a forerunner of the downsized Thunderbird as sort of an offshoot of the Torino? Also, I want to know the difference between a Titanium Elite and a Platinum trim Ford?

Before I address those trivial points, let's look at what’s new for 2019.

The new front end does make a difference for the Edge. It raises its profile and creates distinction in its class. The Titanium grille has a texture once seen on the larger Explorer, which creates an upmarket feel all around. From there, the profile hasn’t changed – tall flanks, ample glass to fill the roofline, and a sloping rear deck with a high beltline.

This leads to the other two details distinguishing this mid-cycle refresh. The taillights are new, while a black strip bridges the two light assemblies together at the base of the rear glass. It creates a sporty look – without applying the ST badges. 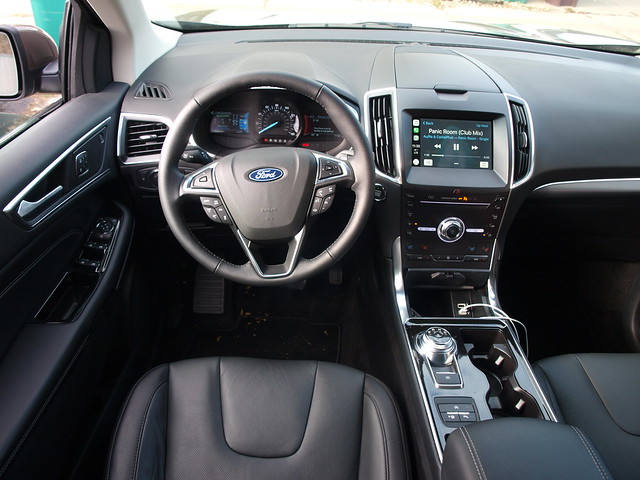 There is little changed inside from the pre-updated version of the Edge. There is a largess to the cabin overall – a feeling of space even though the windshield is set further from the driver and some parts of the instrument panel would be reached in a pinch if need be. The shifter is now a rotary knob, now seen on a growing number of Ford vehicles. If you are used to it, you may miss the absence of paddle shifters on the steering wheel for better gear changes. Of course, you will find them on the ST.

The instrument binnacle follows Ford’s mix of analog and TFT screens. The center speedometer is flanked by two TFT screens that are customizable through the switches on the steering wheel. The switch to the rotary shifter means better access to cupholders, as well as more storage options underneath the center console. Switchgear follows suit with the Fusion with fewer buttons all around.

The front seats are sized well and offer plenty of support and powered adjustments. They do offer plenty of comfort over long distances, as well. Rear room is adult-sized with plenty of leg and headroom for all three positions – including a wide center seat. The "transmission tunnel" is shallow enough for feet to fit for all three occupants.

Cargo space is very generous. With the rear seats up, you get 39.2 cubic feet of very usable space. Put the seats down for up to 73.4 cubic feet of space for longer and bulkier items. My tester had a powered tailgate making life easier.

Getting into the Edge Titanium Elite means being entertained by the B&O Play audio system. It is a fusion of Bang & Olufsen and Harman International creating the cleanest sound in its class. There are 12 speakers positioned around the cabin to entertain you. SYNC3 is what drives this system, with plenty of connectivity and infotainment options – including Apple CarPlay and Android Auto. There is also on board WiFi through FordPass Connect, which is part of a program that enables the owner use a mobile payment method to take care of parking and, even, pay for the service itself. 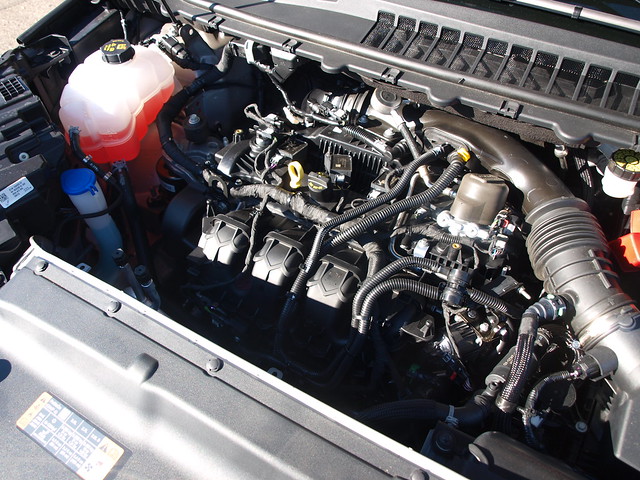 This tester is powered by the 2.0-liter EcoBoost turbocharged four-cylinder engine. If you fuel up with the highest octane – according to Ford, that would be a 93-octane Premium grade – you can get the full benefit of its 245 horsepower and 275 pound-feet of torque. This engine does pull very well, even with lesser octane fuel. A new 8-speed automatic send power on this tester to the front wheels only. All-wheel drive is available on all models. Speaking of fuel, I averaged 23.8 MPG in my care.

The ride quality is quite good – it appears to be improved from pre-facelifted models. On rougher surfaces, it does its best to absorb the road below with minimal effect into the cabin. Handling is actually quite good, as it corners well and moves around obstacles with ease and minimal roll/lean. The Edge does feel bulky for its size class, but it can show some moves when tasked to do so.

The steering is fine, as it has good wheel control and turning radius. On-center feel has a bit of lightness to it, but the Lane-Keeping System and Evasive Steering Assist combine to make sure the Edge does not go off course at any cost. These two features are part of Ford’s Co-Pilot360 system that provides a degree of autonomous driving technology on board. The brakes are superb, with good pedal feel and response. The system provided great stops in normal and panic situations. 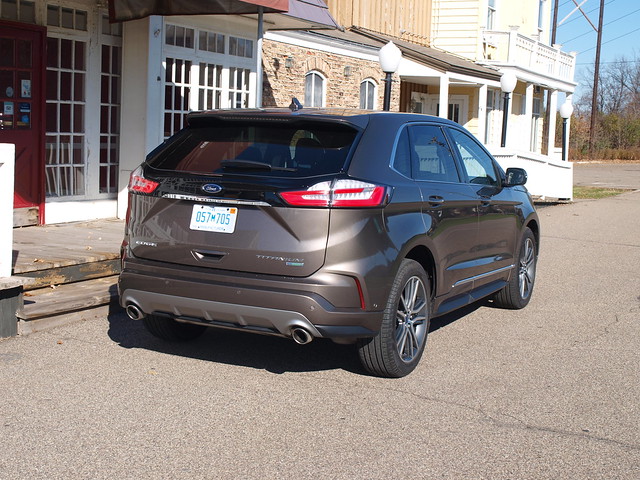 We could talk about the Edge ST with its twin-turbocharged V6 and Ford Performance goodies. However, I have a sneaky suspicion that it may show up on this website somehow…or not. If you must ask, pricing for the Edge ST starts at $42,355. And, yes, all-wheel drive is standard on the ST.

As for the question whether this Titanium Elite should be a Platinum – if the quilted pattern appeared on these seats, then “yes” would be the answer.

Now that we got out of the way, the Ford Edge has truly become a choice for those looking for more SUV without having to get a third row of seats. The package itself has become the mold for a new subcategory of SUV/crossovers that will begin to proliferate as soon as you can walk into a showroom.

Maybe this is the greatest compliment. The Ford Edge is an improved enough product to keep its – pardon the pun – edge over its competitors. That edge is kept at a distance enough for Ford to create new opportunities for this model – including adding more luxury to its most luxurious trim level and, of course, the ST.