Back when the first Lexus dealerships opened up in 1989, all eyes were on the big flagship – the LS 400. It was a game changer. A Japanese flagship luxury sedan that matched up with the best from Germany, Britain, and the USA. The LS was priced below the European flagships, which gave it an advantage when it came to delivering more value at the upper end of the market.

Back when the first Lexus dealerships opened up in 1989, all eyes were on the big flagship – the LS 400.

It was a game changer. A Japanese flagship luxury sedan that matched up with the best from Germany, Britain, and the USA. The LS was priced below the European flagships, which gave it an advantage when it came to delivering more value at the upper end of the market.

However, Lexus did offer a second model alongside the big LS. The ES was a hardtop four-door sedan based on the popular Toyota Camry. Its 2.5-liter V6 helped it stand out in the luxury car field, while the interior seemed like a scaled-down version of the bigger LS.

While the LS grabbed all of the headlines and the spotlight, the ES quietly began growing on potential customers. Every subsequent generation of the ES became an entry point to the kind of luxury Lexus was offering.

Yet, the ES had an image problem. While it consistently sold in volumes above all of the sedan and coupe models – along with the larger SUVs – Lexus found that the ES attracted an older demographic. While Buick was proudly announcing that the average age of their customers had dropped to include some Generation Xers, the Lexus ES simply attracted those seeking to upgrade from their LeSabres and Centurys. 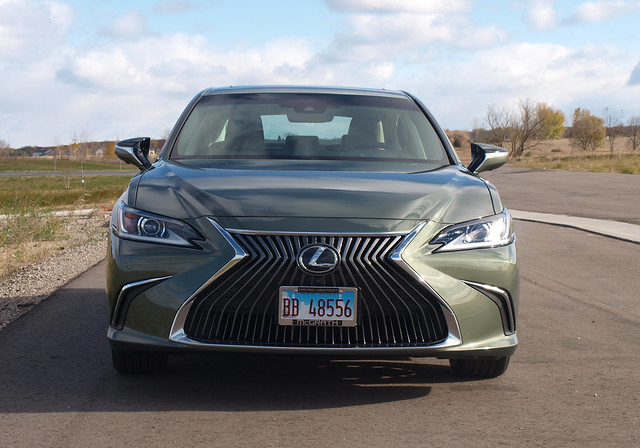 It is not a bad thing to attract an established demographic from certain tax brackets. The ES remained a good value with all models staying below $50,000. However, there were bigger plans for the most popular and long-running entry in their lineup. Not only did Lexus want a younger buyer, but they also wanted their best value proposition to become even better.

Like the Toyota Avalon, I always enjoyed my turns in the outgoing ES. Like the Avalon, I wanted the ES to become more attractive to me as not only a mid-sized luxury sedan but one yielding more excitement.

This was what I asked for when the all-new 2019 Lexus ES showed up for a week in my care. How did it deliver on being more exciting than previous versions of this long-running mid-sized luxury sedan? 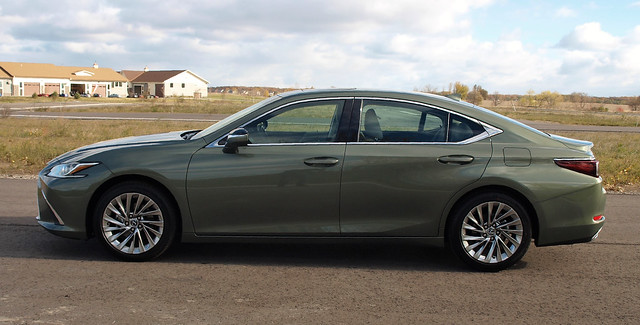 On the outside, it is sharper and more focused. It is sportier and more luxurious. Perhaps it is the Sunlit Green paint job outside? The Spindle Grille dictates the front end design, with a more rakish version of Lexus’ signature face. The headlamps are narrower but emit superb light. The boomerang LED driving lights are more integrated, complimenting the headlamps units.

From the Spindle Grille, the rest of the new ES falls into line. Well, sharper lines that offer a sleeker look overall. The roofline is more rakish, leading to a sculptured rear deck. The taillights are more tapered than before. A familiar look on various sedans these days – not naming names, but, at least Lexus made their trunk lid more are sculptured and distinctive than the rest.

The wide doors help in accessing the interior and for better exits. Once inside, you are charmed by the biggest leap in the history of the ES. The cabin is absolutely stylish – almost to the level of the newest LS. The infotainment screen is wider and set back above the center stack. Perhaps the big change is in the instrumentation, which is completely a TFT screen derived from the various F Sport and F Performance models in the Lexus lineup. There is a single dial with the tachometer on the outside, the digital speedometer in the middle, flanked by a customizable information screen to the left and analog fuel and temperature gauges on the right. Warning lights mostly reside to the far right side of the instrument binnacle. 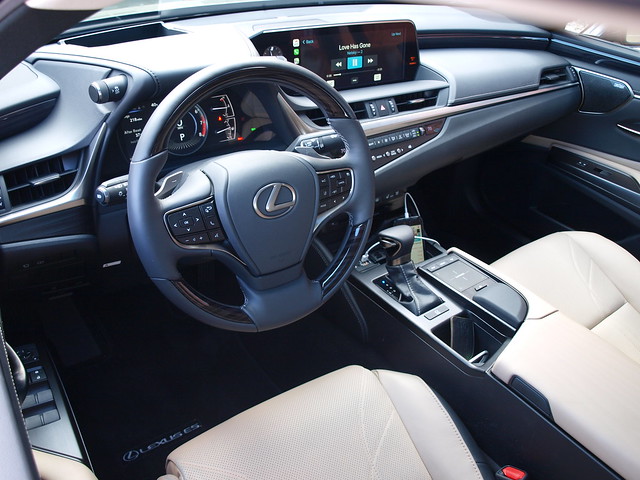 New elements seen on other recent Lexus models now grace the new ES. The switches for the traction control and drive modes now flank the instrument binnacle. The Remote Touch is gone, in favor of the trackpad. The gear lever is now more linear than notched. The new steering wheel offers more tactile controls and a thick rim for better control. Lastly, this is the first vehicle I have ever driven with automatic settings for the heated/cooled seats and heated steering wheel.

The semi-aniline leather seats are perforated for comfort. Front seats offer plenty of options – 14 powered settings for the driver, 10 for the passenger. They are big and supportive. Rear seat room is very good for plenty of bodies. Despite the rakish roofline, someone with a tall torso can find headroom in the rear. The rear seatbacks do fold down to increase the cargo space that is already very generous. With the seatbacks up there are 16.7 cubic feet of trunk space to fill.

The new ES is the first Lexus with Apple CarPlay connectivity. It takes up the entire 12.3-inch screen when enabled. You can flip back to the normal Lexus functions through the Menu button at the trackpad. When CarPlay is disconnected, Lexus Enform Apps take over, with access to Pandora and other similar apps from your smartphone. Your music or play-by-play is fed through a 1,800-watt, 17-speaker Mark Levinson audio system. The quality of this set-up is top notch. 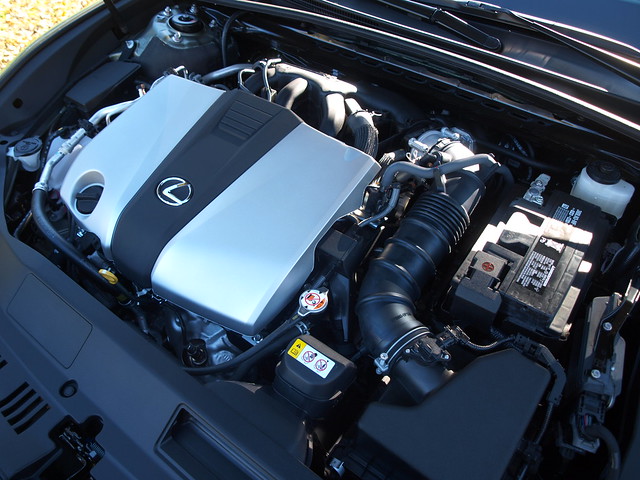 There are more changes to the ES that meets the eye. ES 350 drivers will enjoy the uprated 3.5-liter V6, now with 302 horsepower. A new eight-speed automatic transmission feeds this power to the front wheels with quick and undetectable shifts and excellent power delivery. It feels almost like a sportier V6-powered Lexus car – something that can now be said of the 2019 ES!

In terms of fuel economy, I averaged 26.0 MPG in my care. You can do better if you choose the ES 300h model with its improved 2.5-liter four-cylinder engine and Lexus Hybrid Drive.

Without question, this is the finest ride in its class. It is buttery smooth – something you expect from a 113-inch wheelbase mid-sized luxury car. All credit goes to a new suspension design with the swing-valve shock absorber. That component alone makes for both a relaxed drive across town or over state lines. Handling is more controlled with minimal roll and lean evident in evasive maneuvers and cloverleaf interchanges. 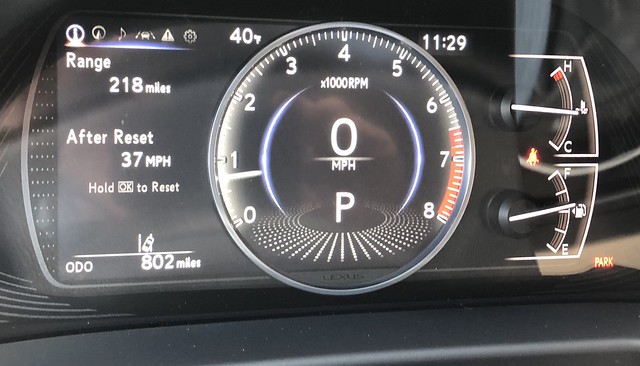 The electronic power steering system offers a great turning radius and solid response at the wheel. Just wished for a bit more on-center stability. That is where the ES 350 F Sport will come into play, with its Sport S+ setting and better-weighted steering. Otherwise, the steering system in this tester is simply just fine. The brakes are excellent, with superb pedal feel and response. The result is great stops in normal and panic situations.

If you want to see the wide 12.3-inch infotainment screen in action, put the ES 350 in reverse. My tester came with the Panoramic View Monitor which gives you a choice of angle, location, and a full 360-view of the car. If you are a novice in parking, this system – combined with the widescreen – will be your best friend. It works very effectively. 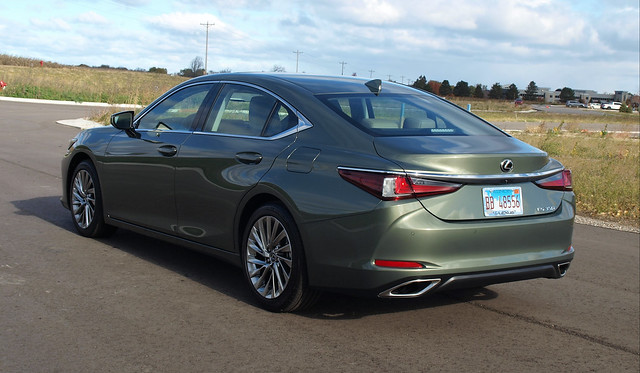 For Lexus, the 2019 ES is an important vehicle for this lineup. Not only will it continue being the top-selling car – right behind the RX and NX SUVs – it could become the only mid-sized offering for the brand. I hate dispelling rumors, but the word out there states that the GS is a goner in a year or so. This leaves the ES to fill the space between the IS and LS.

If that is the case, the ES will do an exemplary job in being the sole mid-sized car offering for the Lexus. And, why not? It has already paid its dues many times over as one of the two original offerings for the brand. It has engaged more than its share of owners with is luxurious charms. This new ES will do more than continue the tradition. It will get a younger demographic that can afford to ride in absolute style.