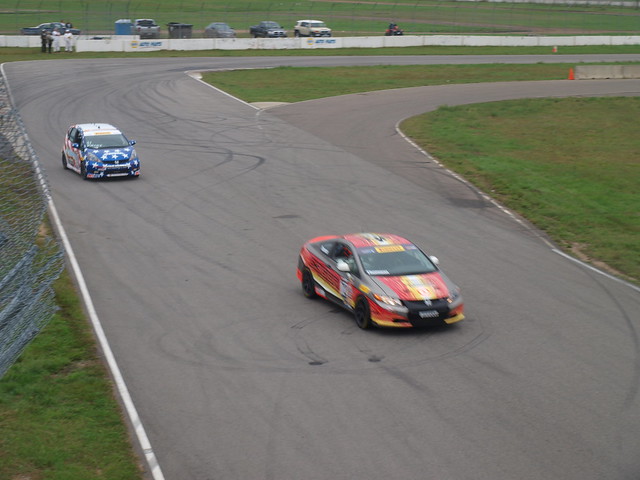 Here is something that will make you fall out of your seat: I have never been to a race before.

Let me translate this: I have never been a motorsports event at any venue.

Still puzzled? You would think I lived in a cave for half-a-century only watching these events on television. Not a cave, but your thoughts are valid.

Since this has been a year of firsts, I took the opportunity to drive up to Brainerd International Raceway over Labor Day Weekend to check out the Pirelli World Challenge Championships and Trans Am racing on their road course. Since I need to ease into this, I attended Saturday’s practice and qualifying sessions.

Why those and not the actual races? To understand motorsport is to see how the teams go through the motions. You can show up on race day, but you have to earn that spot on the grid. Practice and qualifying is the test of the worthiness of both car and driver. Is the car set up correctly? Can it go solo before it mixes it up on the full grid? How is the driver’s fitness on these laps? What kind of lap time can you make the grid with?

Though the larger circuits are indeed sexy – Formula One, IndyCar, NASCAR and the Tudor Championship, to be exact – one should not thumb their nose at the Pirelli and Trans Am circuits. They are competitive with familiar cars we should recognize.

The Pirelli World Challenge reached Brainerd for round 11 out of 12 of its 25th season. As a part of SCCA Pro Racing, six classifications battle it out in a single race, ranging from the Cadillac CTS-Vs in GT to the MINI Coopers of TCB. GT is the sexiest of the classifications, with the new Acura TLX in the mix against the Cadillac, Aston Martin, Audi R8, Bentley Continental, Porsche, Lamborghini, McLaren and so forth. Kia has their foot in this series in the GTS and TCA classes with the Optima and Forte Koup respectively.

At BIR, the TC classes arrived to play.It has been a good season for TC, TCA and TCB, but only a few entrants showed up for the first two classes. TCB became the big show, thanks to some regional entrants. Morrie's dealership chain came with a special Mazda2 loaded with pasted on handprints for Miracles of Mitch. One special TCB entry came in a second generation Honda Fit fielded by Garrett Racing. Their sponsor however struck close to my heart – the American Diabetes Association.

Trans Am is an offshoot of SCCA Pro Racing, mainly run with the Chevrolet Camaro, Ford Mustang. Dodge Challenger and a single Porsche entrant. Brainerd marks their eighth race of the season, now with 48 years of history behind it. This was the circuit that made legends out of Mark Donahue, Parnelli Jones, George Follmer, Swede Savage, Sam Posey and the rest. From those seminal 1969 and 1970 seasons, you saw some of the greats mix it up – namely Tommy Kendall.

Today's Trans Am series have their own heroes. Amy Ruman won her first race in 2011 – the first for a woman in this series. She is still in the mix in the TA class with her Corvette – third overall in points with five podiums this year alone. Ruman won at New Jersey back in June. The big leader is Doug Peterson in his yellow Corvette – not the C7.R yellow you have seen in the Tudor Championship. He won three races so far this year – Sebring, Road Atlanta and Road America – along with two other podiums. 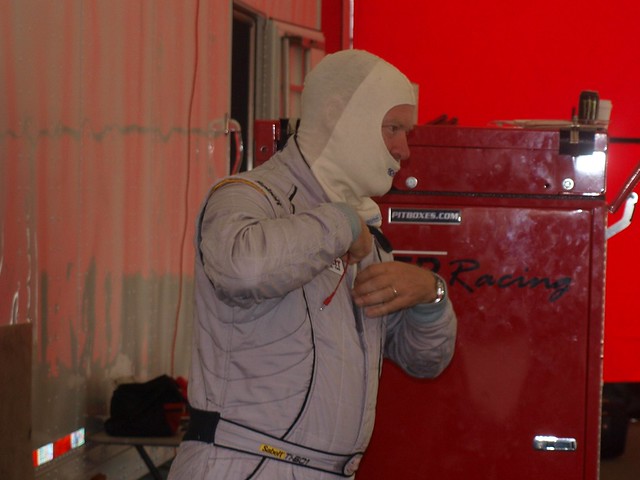 However, if went over to the Miller Racing camp, not only did you see a B5 Blue and a Sublime Dodge Challenger in competition, the latter was driven by a very familiar name – Tommy Kendall. You could say that Kendall is back in the TA2 battle – you also might say that he never left it.

BIR's shorter road course is a solid challenge. Twelve turns that seem low of elevations, but delivering plenty of challenges. The Pirelli TC cars and the Trans Am entrants appear to be polar opposites of each other in terms of what this track can yield. The TC cars are mainly low on power and small in stature. The trick to tackle BIR in a Fit, Mazda2, MINI Cooper is to use the car to manage the curves. However, a driver needs to be o n full throttle on the straights to gain the speed necessary to compete. Full TA racers offer up 800-plus horsepower, which is simply too much to bear on this track. These engines are tuned for road courses, but working that power through the tighter spots of the course has to be balanced, especially when racing with lower horsepower metal.

Staying through the main practices, I noticed a few things. Mainly, the drivers are young. They had teenage pilots amongst the Pirelli crowd and some in their early 20s in both camps. Secondly, it is a combination of skill, set-up, allowance of factory spec and strict budgeting that keeps these racing teams and entrants in the game. You do not expect the luxuries of NASCAR and IndyCar here. The teams are down to Earth in their approach and appear equal in their efforts.

During the practices, I focused on Turn 12 near the exit of the pit lane. It reminded me of Turn 5 at Road America – a tight left-hander with a catch if the turn was not executed. Yet, BIR's catch was deeper with a concrete barrier waiting at the end. If I know the line correctly, you are supposed to come in from the extreme right and hit the apex to exit to the extreme right again. It just seemed that no one was doing that line correctly. No offense to drivers who do not race at BIR or had time to truly understand each turn. What transpired were more than a few instances of drivers exiting with two wheels off. More than a few times, drivers had problems controlling their cars out of the exit. Inevitably, a spin-off did occur in a TCB car. Luckily, both driver and car were OK.

The one element both series battled this weekend was the weather. Ranging from torrential downpours to insistent drizzle, the challenge was to stay on the track and keep pushing. Both series have adopted a "rain or shine" policy where the racing will never stop for moisture of any kind. In the Trans Am practice, the drizzle came back into play as it was red flagged. It was exactly known why the practice was flagged, but there was some great driving going on amongst the Trans Am cars. 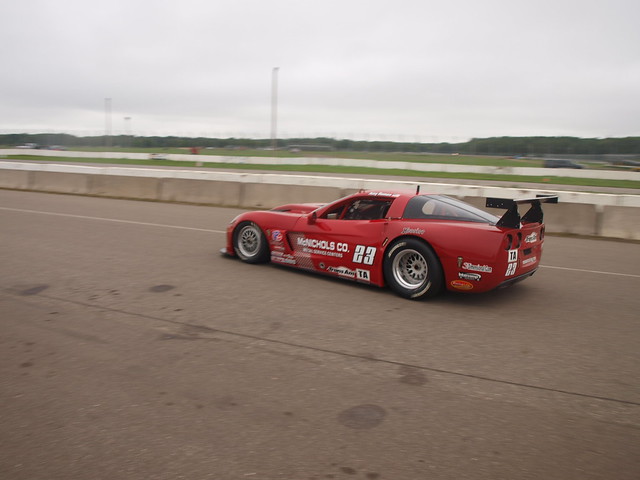 Unfortunately, I did not stay through the qualifying and the actual races. There were some good news to be had. In Trans Am, Peterson and his yellow C6 'Vette won TA class and overall in his round. Ruman, who had bad luck in the last rounds at Mid-Ohio, came roaring to second overall and in class. The TA class got interesting thanks to Ruman's showing at BIR. In a chat with Ruman, I complimented her for being the top ranking woman racer amongst pro racing leagues in North America. She was grateful to hear that – maybe it motivated her to be on the podium at BIR.

Kendall made his run in the TA2 class known, despite some tough competition. Though Ron Keith took the top rung in the class at BIR, Kendall powered his way to second with Adam Andretti and his Camaro polling third. This would be Miller's and Dodge's best result in only its second race. And, in case you're wondering, Adam is related to Mario, Michael, Marco, etc.

The Pirelli circuit ran two races during the weekend. Garrett Racing swept the TCB class at BIR with Johan Schwartz behind the Fit's wheel. Fred Emich and Karl Thomson split the TC class, while TCA saw a sweep by Ernie Francis Jr. and his Breathless Performance Mazda MX-5 Miata. The weekend saw Michael Pettiford challenge the TC class is his Pontiac Solstice from the Denver area against the four-car field this weekend. You read it right – a Pontiac Solstice. Pettiford looked damn good out there at BIR.

The shock was not the racing itself, but how much there is a mix of grassroots and professionalism between these two classes. My interactions with the teams were nothing but cordial up to engaging. In all, the experience was positive. 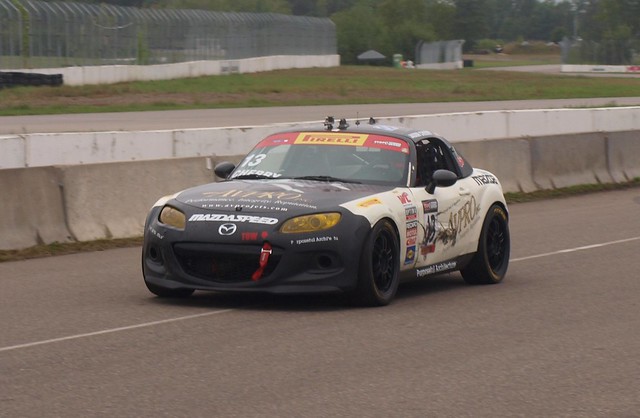 Would I do it again? To work media, if the opportunity presents itself, I would be happy to. As a spectator, I would be too ADD to sit in one place. I have to roam through the paddock, meet the teams, get swag and so forth.

I also found road course racing to be my forte. There is nothing but tackling a curve, managing elevations and just seeing the challenge of a twisty course. Between BIR and Road America, watching an oval race would be boring. There is one exception, however – the Indianapolis 500.

There is nothing like being there at the track. The intoxicating atmosphere of the roar of the engine – rather the strain of one trying to go fast. No matter what is on the track, it is a celebration of athleticism, grassroots effort and the drive towards the podium that makes the spectacle worth the trek.

In other words, I love motorsports. Now, more than ever.