Chevrolet was trying to "Find New Roads." It lead them to the Twin Cities.

To promote the coming of several new models for the 2016 model year, Chevrolet put on a road trip to feature their biggest introduction as they meander across the lower 48 states from Detroit to California. For the sixth generation Camaro, it was a chance to get them on the road to see how they cover this vast nation of ours.

The product itself is indeed significant. The effort is very ambitious. There is more to it than what it seems.

There is a lot to consider about the 2016 Chevrolet Camaro. This road trip is apt because this is the first Camaro to be produced in the USA since 1992 at their Grand River assembly plant in Lansing, Michigan. After the plant in Van Nuys, California – a few miles from where I grew up – closed, fourth generation Camaro production moved to Canada and the St. Therese plant in Quebec. The fifth generation Camaro was solely built at General Motors Canada’s main production site in Oshawa, Ontario. The significance of promoting this all-American Camaro is important now that they are leaving the Grand River facility to dealerships across North America is the core element in showing the mass of changes to the car itself.

The Alpha platform that houses the Cadillac ATS and CTS now underpin the Camaro. The result is lighter weight, a wider choice of engine options and some significant structural, design, spatial and technological updates from the fifth generation car. Having not driven the sixth generation car, I have touched, felt and fitted myself in one. I must admit to some envy as my colleagues are involved with this event. This is going to be a fantastic car and I would love to get my hands on a 2016 Camaro next year for a full evaluation and test.

The road trip itself began at Renaissance Center, GM's global headquarters in Detroit, with two different map points in mind. One group headed east towards New England, while the other group headed down towards Nashville. Between certain city pairs, chosen participants – mainly social media influencers and a few of us hardened automotive scribes – were given a few directions to simply "find new roads" within a timeframe of a couple of days.

The relay group that found themselves in Nashville handed over the Camaros to a couple of driving groups since then. This pack of Camaros would arrive in the Twin Cities. 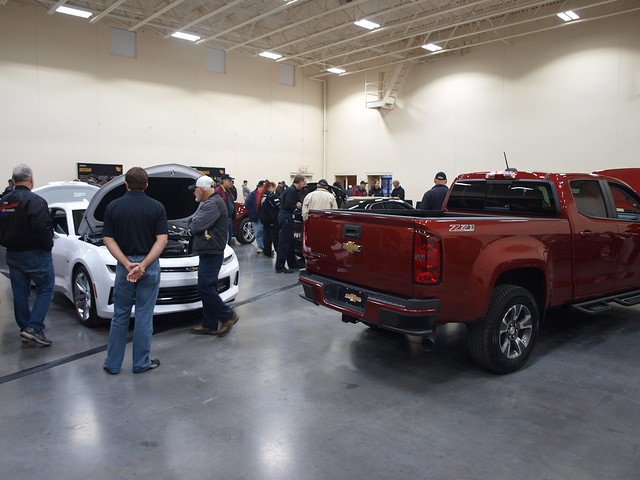 An e-mail tipped me off on the Chevrolet trip, which would include a little exhibition of these new models at the National Sports Center in Blaine. Further communications yielded an invite to join several local Camaro enthusiasts to a VIP hour. I knew no one during this hour except for my contact at GM. I was too busy talking to engineers and sizing up the 2016 Camaro, along with the 2016 Volt, 2016 Malibu, 2016 Equinox and a 2016 Colorado Z71 with the long-awaited Duramax diesel option. A few friends and some of the participants in the next leg of the tour when the public was allowed in. It was good to engage with some of my fellow car community folks, along with some great colleagues inside from the 39-degree Fahrenheit nastiness mixed with rain, snow and sleet outside.

There should have been more folks to join in that night. The weather was terrible, the freeways were worse and it was in Blaine, which is quite a haul for a lot of folks I know. Still, Chevrolet created an environment where engineers from the sixth generation Camaro project were good to engage with their prized baby…and the other products on display up at the NSC.

During that time, I came up with an idea. I wanted to see the teams off on their way to Salt Lake City. I asked my GM contact if it was possible. A Facebook message later that evening gave me the green light. It would be an early rise with darker skies, but I would be ready.

The next morning, I stumbled into the garage to dig out my winter stuff. It was about 40 degrees Fahrenheit outside and no sign of a sunrise. In the process of moving heavy outdoor decor that was put away from the summer, I sprained my right palm. Since all it took was fingers to operate my camera, I had to take it easy.

In all, the bag was thrown in the back of the vehicle I was reviewing that week – a 2016 Ford Escape with Michigan "M" tags – and headed for some coffee and donuts in the North Loop. There, I had to find a close-in metered spot that would not reveal the Ford to the GM brass. A quick few shots and another message up to my GM contact yielded a "come on up" message to meet with everyone. 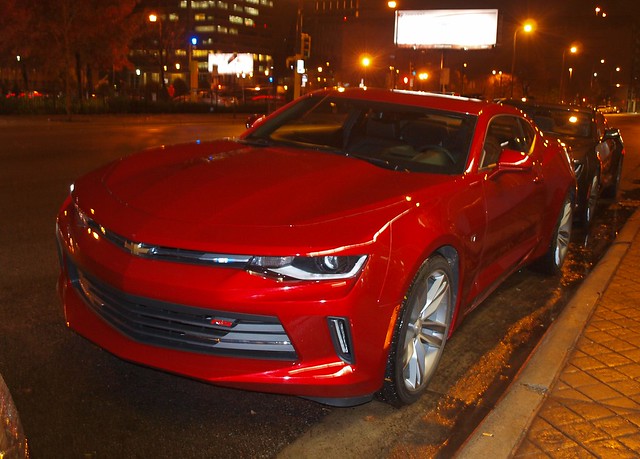 The Hyatt Place in downtown Minneapolis was a recent property, taking over for another chain, I believe. A couple of elevators later, I was met by some familiar faces and was introduced to Craig Daitch, Chevrolet's social media director. I never met Mr. Daitch, but knew of my interest in the Hespen Rally, the charity drive from Detroit to Cleveland in memory of the late Patrick Hespen of Fiat Chrysler Automobiles. It was always good to put faces to names – and vice versa for Daitch.

On this leg from Minneapolis to Salt Lake City were a few great colleagues of mine. Harvey Briggs of Pursuituist.com took the short flight from Madison along with his photographer Glenn Fuller. Then, there was Zane Merva and his brother Josh from New Hampshire and AutoInsane.com. If you have not seen their video from the Red Bull Frozen Rush – please do! Then, there was Joe Sage of Arizona Driver Magazine, his co-driver John Coyle of MotorAuthority. Sage was part of a two Camaro adventure team, alongside Coyle, Kristin Barclay of the In Wheel Time radio show in Houston and blogger Rene Syler. All I know was that they were up for the task to get their 2016 Camaros by Saturday – Halloween – in Salt Lake City. I took some photos of their departure, gave a few tips on getting out of the Twin Cities and sent them on their way.

It sort of reminded me of when MoVenture came through the Cities. Though, there was much more freedom to accomplish throughout the miles in the Chevrolet tour than in the Mopar rally.

When I got home and rendered the photos from that morning, one thing resonated with me from my interactions with the participants which I am proud to call good colleagues of mine. They asked this question: "How come I was not coming along for this trip?"

I figured I would be asked that from those guys. I knew what I had in terms of number, influence, engagement and so forth. Maybe I have become too complacent in putting myself out on all social media channels or too local with my "beat." No clue. I know I am not on too many radars, but with they are resonant with the audiences I want to attract with this work. 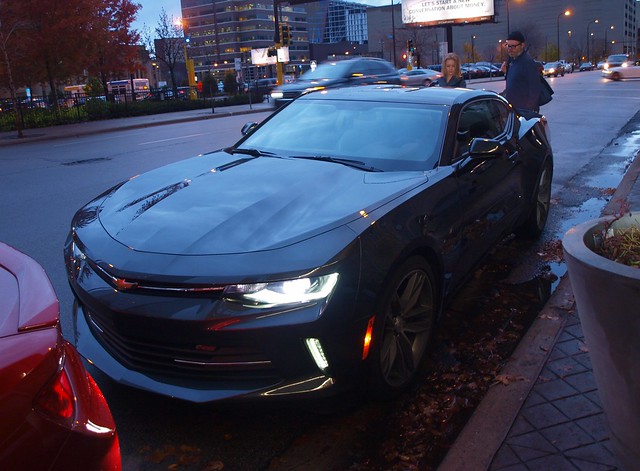 But, what if I was a part of the Find New Roads trip? Where would I go, if I was one of the people running the Minneapolis-Salt Lake City pairing? Or, perhaps another pairing?

From what I have seen on the social media feeds from Briggs, the Merva brothers, and Sage, they covered a hefty chunk of ground through the Dakotas, Iowa, Nebraska, Colorado, Wyoming, Montana, and Utah. They encountered some snow, even with rear-drive Camaros with summer (or perhaps all-season) tires. The buffalo sightings and other stops along the way – Mount Rushmore, Deadwood, and Sturgis, to name a few – made for some wonderful memories for these participants.

If I did the Minneapolis-Salt Lake City pair, I would actually head through Mankato and southwest Minnesota to Sioux Falls, then to Omaha and out through Nebraska to Denver, up to Cheyenne and into Salt Lake City. Knowing I have two-and-a-half days to accomplish this route would help on where I would stay and stop. For me, it would be Omaha, Denver, and Laramie, Wyoming. The latter would be poignant, as it was where Matthew Shepard was murdered – an event that galvanized the nation. Along the way, it would be friends I would call on and join in the celebration of the 2016 Camaro in this traverse of the nation.

The other pair that would fit me best is the Philadelphia-Raleigh pair. These are old familiar roads to me. They were my domain from 1997 to 2000, when I lived in Washington, DC. The purpose of this leg for me is reconnection. Not just reconnection with the roads I once roamed, but with the people of my past. One stop that needs to be made would be DC to see all of my old friends before heading deep into Virginia and some of the old roads I found long ago. From Philly, it is about following U.S. Highway 1, bypassing the turnpikes and the usual roads to Baltimore. I only know that an arrival into DC would be key to accomplishing the first day of driving. A big lunch, perhaps? Just to see everyone one more time.

From DC, it is out on Interstate 66 and down U.S. 29 into the Valley. This was my road to Charlottesville. Or, do I keep going to Roanoke? I do need to stop somehow. The route I finally came up with would take me further along U.S. 29 through Lynchburg to Greensboro, North Carolina. From the Triad, it’s to the finish line in the Triangle and Raleigh. It would be a bit strange to stay overnight in Lynchburg, not far from the Reverend Jerry Fallwell's glorious paradise. Could be fun. If not, it’s Charlottesville, the place Thomas Jefferson called home. 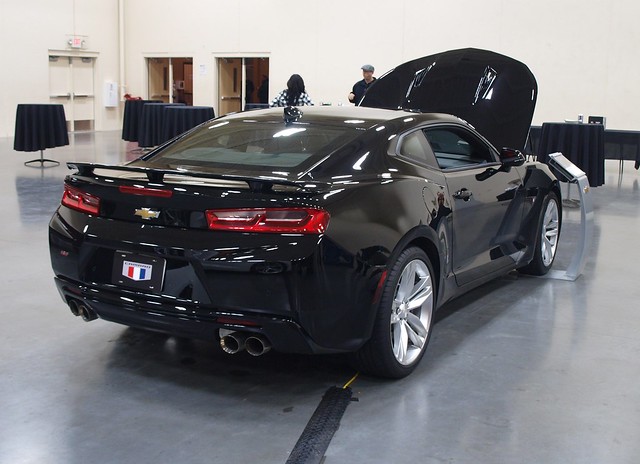 You see how one would get creative getting involved with the Find New Roads Trip? Yet, the idea is to find new roads…new destinations, new pieces of tarmac and new sights. Something one could do in a 2016 Chevrolet Camaro.

Maybe when it's my turn…maybe.