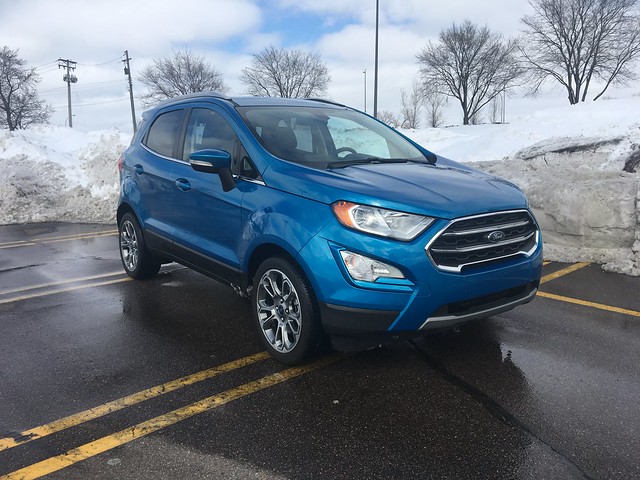 "Don't look behind the Ford EcoSport…" – Photo by Randy Stern

Winter decided to create havoc in the Twin Cities – again!

This is not the first time we had significant snowfall in the Twin Cities in mid-April. Back in 1983, the Twin Cities experienced a blizzard with a similar force – on the same day! This weekend saw snow accumulations of around 15 inches.

According to the Minnesota State Patrol and other media sources, 1,182 vehicles spun out during the storm. Plus, there were 630 crashes statewide with 62 involving injuries. There were two fatalities on the roads during the storm.

Those of us who stayed off the roads might be considered smart. Yet, we never let up of our disdain for a major April snowstorm that sometimes pops up on our memory banks on occasion.

The difference between 1983 and this past weekend was your response to it. We did not have social media or some form of electronic communication – other than our landline telephones – back in 1983.

Social media has a way of creating a call-and-response chain in a quick manner. We complain about the weather. In turn, the media companies read and absorb our reactions.

The result is something of a theme that came from our local Twin Cities media. The NBC affiliate, KARE 11, acknowledged our frustration over the storm and said so on their Facebook posts. I also read that the other television, radio, and print media have written their social media posts towards acknowledging our same frustration.

It is refreshing that we are a part of the news cycle. We often think of a media outlet working from a plinth, and not see our reaction to the news. The level of humanity should be applauded as this is a new turn in interactivity with the media.

Yet, the volume of frustration can be annoying. They drown out the voices of those who take the opportunity to turn a foot-plus of snow into absolute fun. As much as the majority of us would like to feign the presence of this extended winter, your friends actually love this stuff. It gives them an excuse to play in the snow, before firing up the snowblower to clear it all out.

This is one exercise on how social media has impacted the work we do. We post something. We get opinions. We could get responses to "call to actions." But, it is now measured by reach, engagement, and other metrics to see how the message is received.

This explains why KARE 11 could adapt their social media posts pertaining to weather reports by acknowledging the response by their local viewers and Facebook followers alike.

Yet, there is a flip side to social media. I see a few trends that could either stratify or strengthen our connectivity with other humans. If we express a political opinion that we deeply believe in, there will be someone who will challenge that belief and your credibility. If we talk about religion, the same situation entails. Anything that could be seen as divisive is usually one where the "peanut gallery" can flood your social media channels.

I could simply not post a photo of the vehicle if I choose. Or, I keep on using these images as a catalog of the subjects I worked with. Still, it is guaranteed that I will irk someone's rancor over an experience they had with said vehicle while I put my nose to the grindstone in yielding impressions for publication.

Not everyone has a written opinion. Not everyone has to. For years, I have acknowledged the "silent majority." The 450 out of 475 followers/friends/hangers-on who see your post may choose not to "like" or comment on it. Perhaps that is OK not to have 475 comments on your "friends only" post. Heaven forbid you have to respond to each one as they come.

Social media is presumed to impose a form of democracy through the written word, photo image or video. Maybe that is true. With every democracy, there is a tendency to abuse the system. We are all guilty of doing so on social media. Oversharing to vaguebooking – all crimes against the virtual community.

I offer no solutions, except for a simple commonsensical phrase: if you can't say anything nice, don’t say it at all.