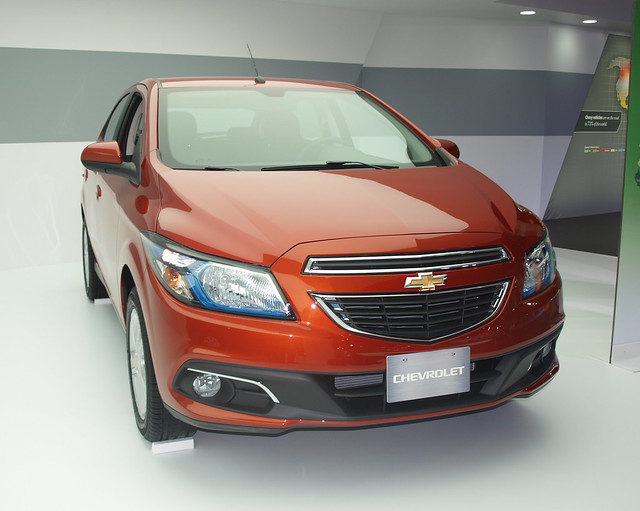 The way forward in Brazil? Photo by Randy Stern

So…are you in the midst of World Cup fever?

If you saw the heroic win by the U.S. Men's National Team against Ghana, you might be. Look, futbol may seem a bit more freeform the usual.

This post is not about futbol, soccer or what ever you feel like calling it. It is about the host nation – Brazil. The South American nation is actually an industrial heavyweight, along with being a natural wonder, a historical quandary, a sports power, a center for music, and a semi-dysfunctional state.

Since the first Chevrolet was assembled in 1925, Brazil grew to become the seventh largest producer of automobiles in the world. Their domestic market reflects a desire for inexpensive small cars, which Brazil's production consists of the majority. Most of these products are simply "hand-me-downs," vehicles that are a few generations old that found continued production and demand in Latin America.

Currently, General Motors, Fiat Chrysler Automobile, Volkswagen, and Ford are amongst the production and sales leaders in Brazil. The country also houses production facilities for Nissan, Toyota, Renault, Peugeot, Citroen, Honda, Mitsubishi, Hyundai, Mercedes-Benz, and Audi. BMW is opening up a new plant in the country, while Fiat Chrysler Automobile is near completion on a new plant in Goiana, Pernambuco state for the subcompact Jeep Renegade SUV.

There was one native Brazilian automaker left – Troller. The maker of small SUVs and trucks has since been sold to Ford.

While Brazil produces inexpensive small cars from older designs, the industry is better known for its small pickups. Brazil's truck market is substantial due to its large agrarian industry. While they purchase mid-size and even larger US-based pickups, the core of this market is a compact-sized, car-based pickup that has proven to be sturdy and durable for the conditions they are put through. GM, Fiat, Volkswagen and Peugeot produce such trucks in Brazil for local and export markets.

Without boring you with facts, history and such about the Brazilian automotive industry – let me get to my point. My colleagues have been going bonkers about the staggering size of the Chinese automotive industry and how it will get into a shouting match with its Indian counterpart for who will supplant Japan and the Republic of Korea in terms of industry influence in Asia. We also recognize the transformation of the industry – both in positive and negative directions – in North America, Europe, Russia and Australia.

The fact is that we cannot ignore Brazil. You could also incorporate other member nations of the Mercosur economic zone in this argument. The power of possibly four million vehicles produced for local and export sale is something to look at closer, especially with its proximity to North America.

We had a history of this – a strange one, at that. For years, we sent our forlorn products to be repurposed in Brazil and throughout Latin America. Kaiser, Ford, Chrysler, and GM – to name a few – sent older products to be built in the factories of South America. They turned out to be amongst the most memorable vehicles in Latin American culture.

In return, Brazil sent us a couple of products of note – the Volkswagen Fox and Golf. VW thought it was a great idea to bring in some models based off of the popular Gol into North America as a low cost alternative to Hyundai and Yugo. After concerns about quality and the lack of luxuries American customers wanted, VW pulled this model off of their showrooms by 1993.

VW tried again by supplanting deliveries of the MkIV Golf to North American markets. In the USA, you could get a MkIV Golf with a Brazilian VIN. That ended when the MkV Golf became the Rabbit and sourcing switched to Germany for the USA market. Though Canadian customers were able to get Brazilian-made MkIV Golfs and Jettas as less expensive products sold alongside their MkV successors.

FCA's commitment to the Pernambuco plant will change this. Once the plant opens, it is slated to become the source for all Jeep Renegade small SUVs sold in North America. This should be a highly anticipated move for the market, as it is seen to benefit both the local economy and FCA, as a whole.

However, there is a concern about Brazilian-made automobiles. A report came out that stated how "deadly" Brazilian-made cars had become. Yet, the focus of this report based on crash data within the country, is focused on low-end cars that are made and sold cheaply, since they are based on older platforms no longer built at their native facilities.

For example, the concern would be centered on models such as the Fiat Uno, Chevrolet Celta and Ford Fiesta RoCam. These are examples of inexpensive models – priced around 32,000 Reals (US$14,200) – that were built on older platforms discarded from the mother company. Some may argue this is an unfair target, since a new crash testing standard has been implemented in Brazil just recently.

If Brazil wants to compete on the world stage, they need to build vehicles that will comply with the most stringent of standards in terms of quality, safety and engineering. Building low-priced "hand-me-downs" for high profit are not going to fly when considering a larger market based on potential economic growth and further export opportunities with new and expanding trading partners.

What will fly is the production of advanced low-priced cars. The Chevrolet Onix is an example of what can be done in the marketplace. It is low-priced – around 34,000 Reals – but there is a higher execution of quality with some consideration for safety. However, there is still room for improvement towards meeting advanced safety regulations and higher levels of build quality and durability.

The argument of creating a "first-world level" automobile industry in a developing country could be seen as corporate colonialism. Perhaps we have bore witness to this for decades in India, South Africa, the former Soviet states…and, yes, Brazil. What has to happen is a balance between the local economy and the corporate entity with room for growth and improvement. Jobs are definitely important. However, there must be other considerations to ensure quality, product safety, market-driven offerings, environmental considerations and sustainability for a return on long-term investment.

In other words, anyone doing business in Brazil needs to step up.

While the nation welcomes international community to its futbol-driven party – and the U.S. Men's National Team readies for their knockout round match with Belgium – consider what this mighty country could do for our hemisphere. Imagine what could be done to sustain its growth without compromise. That would give some respect by the first world to Brazil.