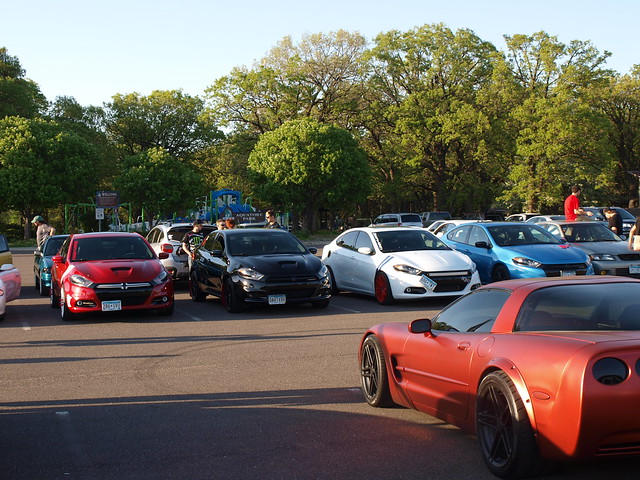 Car season began in Minnesota a month-and-a-half ago.

I was reminded of it at the time by the flood of social media posts with anxious enthusiasts waiting to arrive at AutoMotorPlex in Chanhassen prior to the new gate time. Old habits changed, since the City of Chanhassen has enforced a "no line up" rule in front the garage condo complex where the first Minnesota Cars & Coffee of the year took place.

Auxiliary events took place to varying degrees of success. One meet saw a car roll over. Not sure what happened there, but it made the rounds in social media. Otherwise, I was told how successful the first Minnesota Cars & Coffee was, as well as other events that I missed out on due to battling illness. I managed to stop by a dyno event at Porsche Minneapolis in the small window that I was semi-healthy enough to do anything.

A couple of days later, social media flipped out the story broke out over the situation with the City of Chanhassen and Carver County that went down with Minnesota Cars & Coffee. In the end, the Minnesota Cars & Coffee cancelled their their May event altogether. The good news is that they are returning on June 3 at a new location – Canterbury Park in Shakopee.

In the subsequent weekends of the new car season, I did make a few appearances at some events. They were attended with varying levels of comfort. There were moments when I felt uncomfortable, while others made me come out of my shell and simply enjoyed the moment.

An example of the latter was Minnesota Nissan Infiniti's annual Spring Has Sprung show at Running Aces. When there were people who can make you comfortable in a second's moment, then you can relax and enjoy the show. In the end, I stayed through to the end and thoroughly enjoyed the event.

I found myself getting more comfortable at recent car meets and shows this month. Maybe because I am seeing something that I am liking. Maybe it is because I am being selective in where I am going and whom I'm associating with. Then again, my curiosity will lead me to go to places and events that I originally did not intend to go.

It brings up a question: why would I ever feel uncomfortable in an environment that I am supposed to celebrate? Has that affected my support of the local car community?

Don't get me wrong. I love this local and regional car community. I look forward to working with at least one such group in the state. I also enjoy being at events where I feel welcomed and comfortable spectating or participating.

Yet, there had been moments where the car community reminded me of the William Golding novel Lord of The Flies. The behavior seen at car events were of a lower maturity and care for each other's prized vehicles. This also spilled into unnecessary social media drama that has been stressful to read to the point where we have seen the "fanboys" and "trolls" winning over the good people of this car community. There had been an undercurrent joke of when will there be an act similar to Piggy's death, as in the book. Let's hope that we never get to that point.

As I looked back at material I wrote about the car community, there was a piece I wrote four years that point out the line between spectators and participants. One such sage note in that article came from a friend of mine in regards to interacting with these events: "if I did not act like a douchebag, I am good with that group." As blunt as that may be, it remains true today. This sage advice turned this "outsider" into what I do today, even if my levels of comfort with this car community might be challenged on some days.

Perhaps there are those who have not heeded such sage advice. We call them "fanboys," "trolls," and so forth. There have been groups and other publications that have attracted their share of such people. This site and I have, too.

Whenever I am in the car community, I keep hearing about so-and-so and what they done to "ruin" the car scene. I have people whom I had issues with. As a rule, I try to give everyone a fair go. I also learned to enjoy myself and do my thing even as I connect with some people at a given venue.

That would probably be my suggestion to you. Instead of hating, love. Love being there. Love seeing your friends. Love seeing something cool you've never seen before. Love asking questions. And, love those who are around you – whether you like them or not!

If there is someone you do not wish to associate with, be mature and simply go about doing your thing. Take pride in your ride, regardless of what the haters, trolls and fanboys say on social media – or to your face.

If we can return to being a community that is positive instead of hateful, maybe – just maybe – we can regain what we have supposedly lost. We might begin to respect each other again. I am asking a lot, but I know this car community well enough to see that there will be a time when we can come together in a positive scenario and work things out.

As for me, I'll be over there…doing my thing.