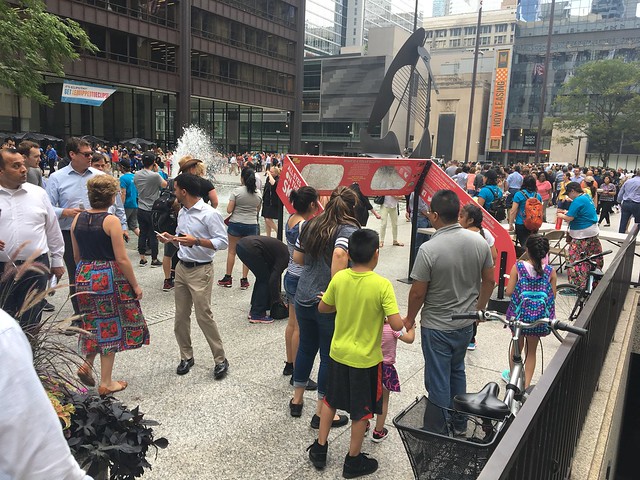 My friends – you are amazing.

In following social media, I saw what you did. You did not fly "your Lear Jet to Nova Scotia to see the total eclipse of the sun." Actually, the path of totality never came close to Nova Scotia.

You could be filmmaker Casey Neistat, who flew from New York to Charleston, South Carolina, only to drive further into the state to actually capture this solar phenomenon with five cameras. But, most of you took to the road instead. Kansas City saw an influx of eclipse enthusiasts. So did Charleston, Knoxville, St. Louis, Paducah, and a few other places along the path of totality.

Though it was a scientific phenomenon that piqued the interest of many Americans – more so than what we thought. It was also an opportunity for some marketing strategies to take place.

Mitsubishi saw a golden opportunity to further unveil their upcoming 2018 Eclipse Cross in Salem, Oregon. They brought influencers along while they took photos of the new car with the moon crossing into the sun. Clever marketing, indeed!

Nissan also got into the act with a viewing party near their headquarters in Franklin, Tennessee. A few colleagues were invited to this event, which tied into the introduction of the Midnight Editions of the Frontier and Titan pickups. Again, very clever marketing indeed!

As I was in Chicago heading to meet with my Hyundai hosts for a regional media drive, I, too, was caught up in Eclipse Madness. I was walking along Daley Plaza, I saw a very long line snaking to get a pair of free eclipse viewing glasses from the Adler Planetarium. Chicago was not in the path of totality, but they had a good shot at the eclipse from a few viewing areas – Daley Plaza, Adler Planetarium and at the Bean in Millennium Park. Others made the trek to the path of totality down in Carbondale on the campus of Southern Illinois University.

I never saw the eclipse. I was too busy trying to get food and get out to Hinsdale to meet with my ride to the hotel. When my Metra train did leave Union Station, the cloudy skies were a bit ominous than before. It was not completely dark, but it felt like a storm was coming in. A few miles down the track, things brighten back up. The sun blew through the clouds and a hazy, but beautiful day revealed itself in the western suburbs.

All of this has a point somewhere. The eclipse experience for you involved some form of travel. You got into your automobiles – in some cases, randomly – and played out Carly Simon's lyrics. You even may have played Bonnie Tyler's only hit to her credit in your audio system.

The fact that you induced to travel to see this once-in-a-lifetime solar phenomenon carries long-term benefits on various fronts.

One, you showed an interest in science. The battle for the relevance of science in education has been fraught with a turn towards educational ignorance in our primary and secondary schools.

Without science education, we will never have engineers, designers, and advanced technology personnel in the automotive industry. These are the people that must answer the questions of the future of the automobile. How can we talk about satellite communication, solar energy, and autonomous driving without experiencing a solar eclipse? Once you see it, how many young people will consider a career in advancing the automobile – and the entire world of transportation – to the next level?

This is the link that needs to be made. Education must be ready for the curious towards creating a path into those professions that need a science education to become successful in.

Secondly, you proved the power of travel. While I saw that you had planned a long weekend at your place of totality, others just took to the road to chase the eclipse on that day. You got your eclipse viewing glasses, found a spot along the path of totality and watched the moon cross over the sun.

This weekend, the BBC World Service had an interview with an economist regarding the benefits and pratfalls of the eclipse. The question centered on whether there would be a positive economic benefit to communities along the path of totality. The answer was yes and no.

This is easy to explain. While communities along the path of totality may have benefitted from the extra influx of tourists, they left their jobs for at least a workday. If they paid time off, maybe it would work in their favor. Yet, their employers have at least one person not at their work site, resulting in a loss of productive income from an absent employee.

These are two divergent takeaways from the solar eclipse. Yet, they point to how the economy is tied into such an event. They both relate back to the automobile as a vehicle to simply become part of the event.

If one thing stood out from the solar eclipse – our news cycle was focused on it. So were our social media efforts. It made for a better day overall. Thank you for that!