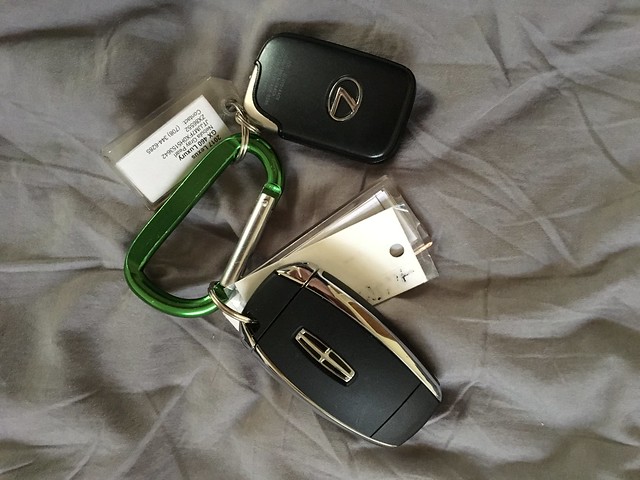 Are these the keys to your heart?

We have two here. One is from a Lexus, the other from a Lincoln. A contrast of two luxury cars for which you can walk up – or press a button – and get in. Then, you press a button…and the vehicle comes to life. These are simply two keys that start your ignition and get you going, until you stop it. Still, we call them "keys" these days…

Why am I talking about a key? There was a story several years ago where Edmunds.com listed the ten coolest key fobs out in the market. The weighted Bentley switchblade key/remote locking fob obviously came in first. The list also includes some very prestigious names, such as Mercedes-Benz, BMW, Lexus, Infiniti, Jaguar, Land Rover and Cadillac. Each key and fob is distinctive in relation to their brand.

A Range Rover owner can lose their key down a canyon and not get crushed to death if it fell within 30 feet of the point of departure. Some keys no longer employ a blade to enter into a lock or ignition cylinder. Older Toyota Prius and Volkswagen Passat models will let you shove the fob into a slot onto the have you push the button to start the car.

Car owners covet their keys. They panic when they find themselves locked out with the key left in the ignition. They panic again when they lose them somewhere. In all, we take our car keys for granted. Or, do we?

With the advancement of technology along with proven reliability of these components, we are seeing a slow death of the traditional key. The stand-alone key is being replaced by integrated key/remote locking units and key cards. Some cars even go as far as to say to not put anything in the ignition as the transponder key is coded to sense your entry in the car and to leave that unit in your pocket. It may come to a point that attaching this device to a carbineer clip will become redundant.

Still, many consumers would rather have the security of the traditional key. After all, these keys have gotten cooler. Hellcat-equipped Dodge Chargers and Challengers receive two "keys" – one for the valet limiting the power under the hood and the other for you. That other one happens to red and can open up the engine to its full 707 horsepower. Scion tC owners received a grey key with integrated remote locking functions. Obviously that was one distinction apart from their Toyota brethren. Of course, Nissan and Infiniti have the coolest of the latest technology of bladeless keys. A small oval-shaped multi-function fob that acts as a security transponder that emits a code for entry and ignition. The same key is available in almost every car model from the Versa to the QX80.

Yet, I'll admit that there's nothing like the feeling of slotting a key into the ignition and giving it a turn. The reaction of the ignition and the motor's final response is priceless. When I'm walking around somewhere or hanging out with friends, my fingers give attention to the feel of a well-designed key and its remote locking fob. Call it a nervous tick or a substitute for something else I'd rather not discuss to a open audience, but you have to admit there's a bit of good feeling when one touches the key to their heart…the key to their car.