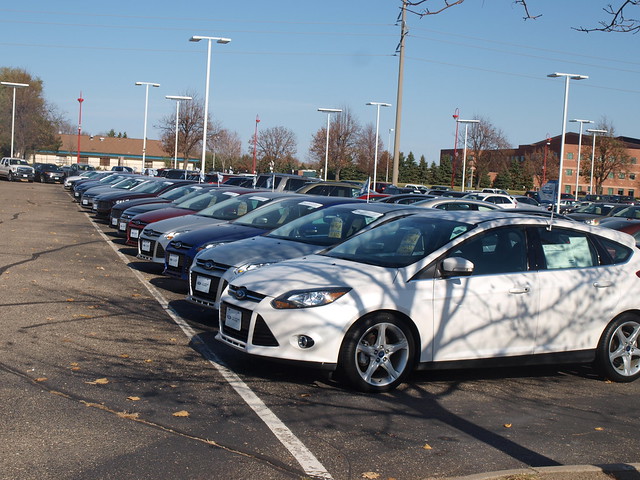 A look at Jake's lot. Photo by Randy Stern

How did we first encounter our love for cars? How does it manifest today?

If we did a random poll of you, the dealer lot may have been one of the first places you fell in love with the automobile. In many cities and towns, the local dealership stood as a place of dreams. The rows of cars, trucks and SUVs enticed and lured you to see them up close and personal. Someday, you want to drive one. Someday, you might find one of them at your home.

They become magical places at the start of the new car cycle. In my day, one date denoted the arrival of the next model year. That day brought banners, window clings and the updated vehicles to the forefront. The feel of a new car brochure – a guide to what's new to even the casual observer – was a welcomed gift to the car fan. Even before my time, kids were given actual model cars of the latest and greatest as a reminder of what's new for their favorite brand. Mom and Dad watched as the child's delight was shared by their enthusiasm for the new model year.

Of course, things have changed. Instead of new model year launches, dealerships still draw the public to check out the latest and greatest. Even those who have a fleeting interest in the automobile.

It was with keen interest that I saw this report on Minneapolis-St. Paul's NBC affiliate, KARE 11, on a young person who loves dealer lots. The story showed how one of the Twin Cities' leading dealerships, Apple Ford Lincoln in Apple Valley, Minnesota, welcomed a teenager with "moderate mental retardation" to become part of the life of the dealership.

Earlier in his life, Jake Nelson's parents would take him to various dealerships to fulfill his love of the automobile. One photo on the KARE 11 report showed a collection of die cast cars that are also a tangible reminder of that love.

Where the story becomes even bigger is when the staff at the Ford store has incorporated Nelson into the dealership. A few days a week, Nelson would check for unlocked cars and vehicles that do not look right – with phrases to help correct the problem. If a wheel is not straight in its position, Nelson will notice it and have it corrected.

This is a feel good story. Not just for Apple Autos and the Nelson family, but for those of us who had similar experiences to Jake's when we were younger.

I was like Jake, in a sense. The dealer lot visits of my youth helped frame what I do today. The experience of feeling the cars, asking questions and getting some reminder of what to expect when I start driving – or, become an automotive writer. My dad took me to them. Sometimes my mother would, too. She would only go if she had an idea to replace her car. As I got older, I went on my own. A scary thought seeing a chubby teenager that looks like he's old enough to drive – but is just a few years shy of doing so.

Then again, I came through an interesting time in automotive history. The late 1970s and early 1980s were tough on the domestic auto industry. Quality was down, and innovations were slow to come. Some so-called innovations became failures, while others are seen as commonplace today.

Bearing witness to the changing landscape of the automobile helped in framing some ideas about them. My visits through the lots gave me a lot of food for thought – even today, as I have connected with several retailers across North America. Back then, it was all about the product. I had no idea about the retail operations of each dealership – except for the fact that there were a lot more independently owned retailers back in the day.

I was never exposed to small town dealerships, as I am today. I could imagine not growing up in the Los Angeles area, or any major metropolitan area, and being that kid in front of the "candy store" watching the latest cars and trucks roll on and off the lot.

Maybe I was lucky. Like Nelson, we experienced dealerships in larger markets – where we are exposed to acres of vehicles, both new and pre-owned. Yet, a dealership could be a cold place. They could also be too happy to try to get a sale from any person walking onto the property – sometimes to the point of annoyance. However, as the Nelson family could attest, there are good dealers. Ones who understand they need to get the sale, but are engaged with the community as defined by territory, loyal customers, brand enthusiasts and the causes the retailer is involved with.

Dealers still has that pull today. The idea of car identity and the three dimensional experience are not lost with younger people. These places still inspires dreams.

For Jake Nelson, he is indeed living his dream. We are, too.