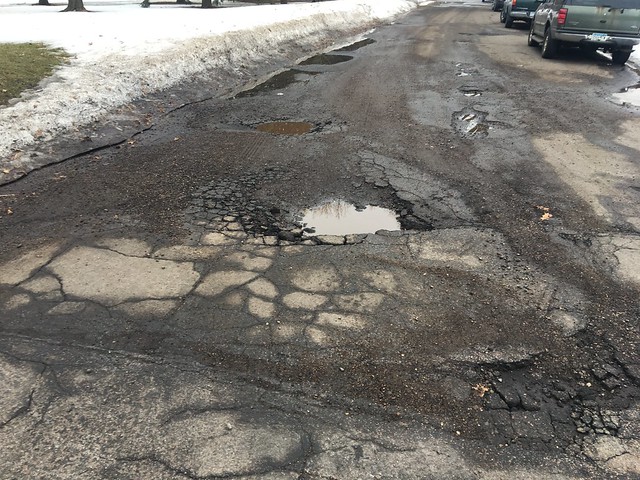 How was your winter?

Ours was "interesting." It is a way we Minnesotans express our feelings when we know we had it bad or indifferent. To be honest, it was a very indifferent winter.

However, one look at the roads will tell you a different story. The potholes were many around the Twin Cities. They varied in size and depth, but there were more than enough to perhaps look at resurfacing several roads that may have been ravaged by them.

A week ago, the City of Robbinsdale attempted to fill in some of the potholes near my home. They filled them, but they did surface them. In fact, some of them already sank below the road’s surface after a couple of inclement rounds afterward.

Understand why I talk about potholes. After inches of snow would fall, road crews would have to plow, then treat the roads with salt. After a few years, roads that had not been fully worked on with weaken to allow for those potholes to take the brunt of the plows and treatment.

The consequence as motorists will range from overworked suspension bits to destroyed wheels and tires. Not to mention your alignment will be off from the specification and some components would end up being loose. The latter could result in suspension damage that will break the bank if not spotted quickly.

Not to scare anyone here, but I have witnessed my share of consequences by the motorist who think that they could drive over potholes and other deeper cracks on the road without even caring that they exist. Maybe you are one of these motorists.

The first thing I say to you is to be patient. It takes temperature, drier surfaces, and a budget to get these potholes fixed. Governments have found that fixing these potholes in warmer temperatures using a "hot mix" would cure better than using a softer "winter mix."

Secondly, if your vehicle is damaged by these potholes, discuss it with your insurance company. Let them deal with the powers to be to work on the claim and to recoup the cost of the damage. You can report a pothole to the governmental authority where they occur, but don’t ask for any money from them. There are many claims that have been unpaid. In Minnesota, only five percent of direct pothole damage claims have been paid as of 2013. Hopefully, that figure has risen since then.

Consider this: You will be paying for road repairs near your home, whether it is a pothole in front of your lawn or a complete road resurfacing project. Remember, this is your tax dollars at work – your property tax dollars, to be exact.

This reminds of a story. When I was living outside of Washington, DC at the end of the 1990s, there was a mayoral candidate in the District that understand what its residents needed. For years, the District’s government had been criticized for not repairing its streets. Not just in part of the District – every part of it. One candidate – he eventually won the election – campaigned on the plank that he will fix the potholes in the city. If that doesn’t engage voters, what will?

Because some communities are getting battered with pothole fixes, is there a solution that will not break the taxpayer’s bank? Before you ask your government: “why can’t you use that surface they use in another country where it doesn’t crack, split, or induce potholes?” There are plenty of complications to tackle before you even spend the money on new surfaces. For example, the government must have the budget to do anything – from pothole repairs to road resurfacing.

Luckily, Minnesota has a state surplus to invest back into the roads. At least the state’s highways. The hive of activity to complete these projects was intense over the last two years. There are still more projects to work on in which the budget might still be there. To complete the laundry list of these projects, the state would have to continue funding and seek Federal monies to complete them.

Since we are talking a local issue, most potholes would have to be locally funded. They will be funded through your property tax bill. Nobody rides for free. Sorry.

Or, maybe you should see it the same way as a Fram oil filter commercial, but paraphrasing: “pay it now, or pay it later.” The choice is really yours – better streets or a broken car.

This is not an exercise in belaboring points. Rather, it is a reminder of the annual discussion over the state of our roadways that comes from temporary amnesia and politics. We forget that potholes will show up every late winter/early spring to frustrate us. This is a routine we wished would go away.

No matter how expensive the solution will be or how much our governments do not want to invest in long-term solutions due to budget constraints, but have to simply deal with those potholes by doing the one thing that will not cost you a dime – drive carefully over them.